I loathe mentioning it, but Angry Birds has seemingly invented a new casual game genre, where slinging things at large structures to inspire physics-based destruction is all the rage. It’s hard to see a game in that vein without recalling the mobile gaming juggernaut. However, Microsoft Studios and Iron Galaxy hope to do just that with their motion gaming take on the slingshot/tower destruction action game Wreckateer, as part of this year’s Summer of Arcade.

Is it worth your time, money, and ultimately, physical effort? 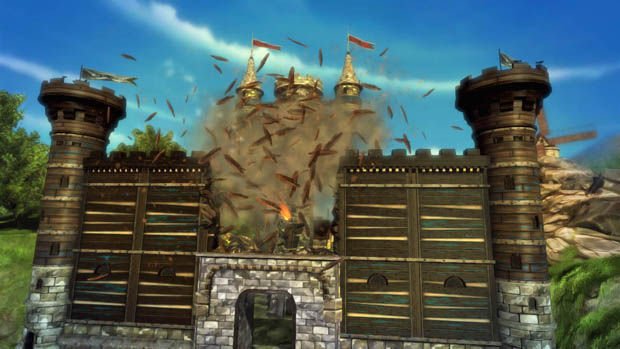 Wreck and Tinker are the kingdom’s resident wreckers. They build giant ballistas to help take care of the goblin infestation that plagues the neighboring townships in the kingdom. That’s right, if there’s a goblin infesting your castle, instead of sending in some sort of extermination squad, they just destroy the entire castle they’re in. They must own a real estate side business. Anyway, as their new intern, they have chosen you to test their new shot types for their ballista, and find that you make an excellent wrecker, so you’re set off to nine other towns to eradicate the goblin menace.

From that point, it’s your standard “destroy the goblins in X number of shots” style gaming, with motion controls. You step up to the ballista and clasp your hands together to grab the bow, step back to pull back, then release your hands straight out to fire. You aim up or down by raising or lowering your hands before release, and by turning your body the left or right to direction you want to aim. The further you step back, the more power and speed the shot has, but you sacrifice maneuverability. 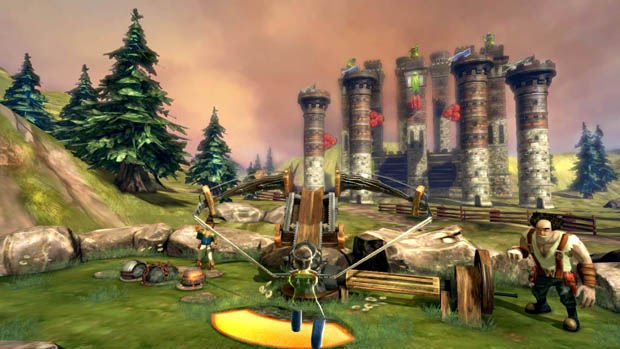 Once released, the view switches to a follow cam behind the shot. With most of the shot types, you can push and wave the shot in different directions to coax it more towards the direction you want with the aid of your “magic gauntlets”. Different shot types are affected by these, which basically just allow two hands to appear on screen to show you where you’re directing the shot. Split shots, for example, once activated, remain within the confines of your gauntlets on screen, allowing for maneuverability and a wide area of destruction.

I have to say, I was surprised at how well the motion controls were implemented. Only once did I feel frustrated that things weren’t doing what I wanted, and that was during the initial tutorial stage. Honestly, it really wasn’t a tutorial at all, as it didn’t explain HOW to direct shots, just that you could. I later discovered once I unlocked the flying shot that I only needed to move my ARMS to control flight, raising them to go higher, and lowering them to drop down and head towards the ground; in the tutorial I was moving my whole body while keeping my arms in the air above my head, which led to some initial frustration. Once past that, however, the game actually not only described each new shot type, but gave you a better idea on how to control them. 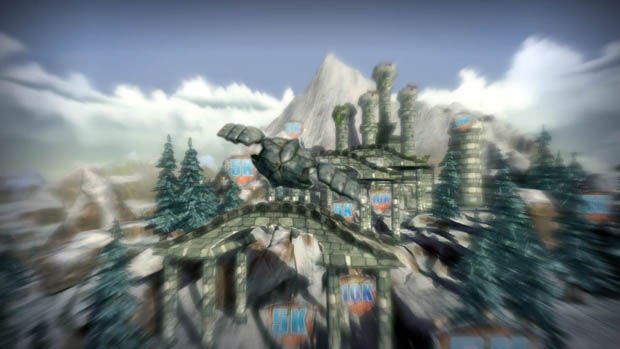 The shot types are the real stars of the show here, and the variety is familiar yet fun. The flying shot, as I mentioned, is the most nimble, with the most amount of player control. There are also bomb shots, which explode once activated, speed shots that burst forward on activation, and others, six different types in all. Each is “activated” by putting your arms out once the shot is fired. There are also numerous shot icon scattered about the levels as shields floating in mid-air. These modifiers act as the special shots do, but can transform any shot to the modifiers type, making normal shots explosive, flying shots burst with speed, etc. There are also point multiplier icons floating around as well.

It’s these shot icons and shot actions that push your score into high rankings. Each level has a bronze, silver and gold medal goal, and depending on how your shot is executed adds to your score. If you buzz a shot past a goblin, you get a “terrified” action icon. Bounce the shot on the ground while still taking out a tower nets you a “bank shot” icon, and so on. The build-up of these icons in addition to the amount of destruction caused builds your score up. In earlier levels, it’s easy to plot out your course of destruction and use the floating icons and multipliers to your advantage, but the later levels really push you to think unilaterally, limiting your shots and shot types to get you to think about how best you can cause destruction to net massive points. There were many mulligans used to get the shots JUST right while playing several levels, as I convinced myself I would be satisfied with gold or NOTHING. 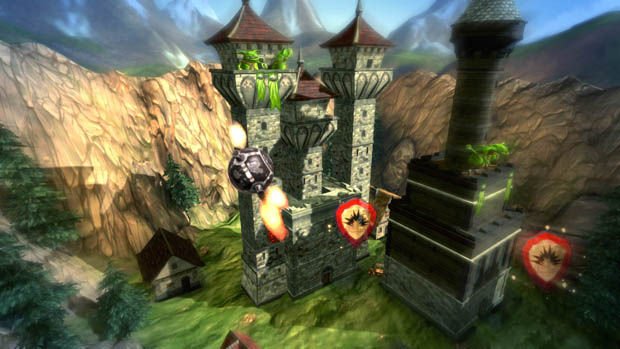 Doing this with a controller would work fine, but this is, and I honestly mean this, a game where “Better with Kinect” really seems to be true. There is something so stupidly fun about waving your arms around like a git, but getting it to do EXACTLY what you want it to. The precision was surprising, and I found myself playing this game for longer than I anticipated — which is easy to do considering the games 60 missions, including challenge missions where you have one shot and a per-determined set of objectives to meet.

As if that weren’t enough, the game is also home to the introduction of a new feature: Avatar Famestar. This achievment-within-an-achievement program sets forth specific challenges to earn you “fame” that net rewards and outfits for your avatar. It’s utilized by Avatar-centric games such as this one, with Full House Poker and A World Of Kelflings receiving updates to allow for it, and upcoming titles such as Avatar Motocross Madness, Fire Pro Wrestling, and Homerun Stars rounding out the list of projected titles that will feature Avatar Famestar and allow earned Avatar outfits to be shared across multiple gameplay environments. While that may not seem exciting for some, it’s a nice additional set of challenges if you’re into that kind of thing.

I was one of the few people I know who was actually looking forward to this title when it was announced, and I must say, I was not disappointed. While the storyline may be a bit hokey and the voice-acting a bit childish, the fun that can be had with the gameplay and smooth easy motion controls just can’t be denied. It’s the best kind of fun: simple to play, but hard to master. It’s a casual motion controlled game that actually works well, and offers up real satisfaction when that control pays off it high scores and massive destruction. What more could you want?