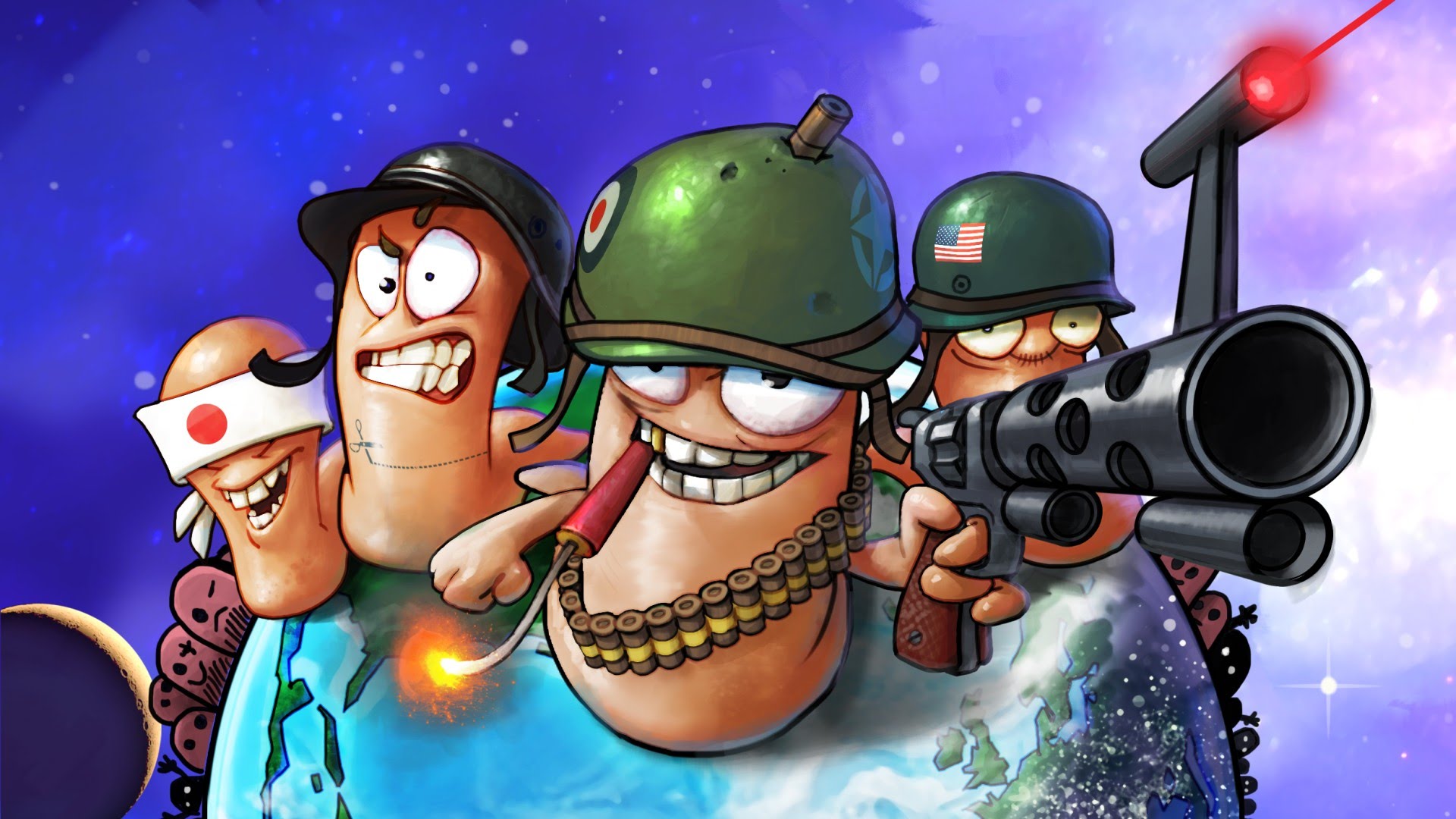 Worms World Party has always been a divisive entry in the long-running series. Released as a followup to the almost universally lauded Worms Armageddon, some viewed it as a welcome refinement to a great game while others saw it as a too-same iteration that only served to split the online community. Me, I never actually played World Party because I was still spending countless hours on Armageddon.

So now we have Worms World Party Remastered, bringing the wormy strategy up to today’s standards of HD visuals and Steam integration. To that end it works, but despite the upgrades it can’t help but feel like an old game with a fresh coat of paint.

The trailer below does a good job summarizing what is new in this remastered version. Resolution can now go as high as 1920×1080. Sound effects have been updated. Controller support is in for those who are more familiar with the console versions. Steam features like leaderboards, achievements, and trading cards are all here.

While those are all welcome additions, some feel half-baked or manifest in unexpected ways. The Steam integration is a little wonky, since the default screenshot button is F12, which is used in game to select the “Skip Go” and “Surrender” actions. These don’t come up frequently and there are ways around it, but I have already taken a few errant screenshots because of it. It goes the other way too; intentionally taking a screenshot will inadvertently bring up the actions. When it happens (or when any Steam notification comes up), the notification window covers a good chunk of the bottom right corner of the screen, where wind velocity and weapon information live.

More jarring is the visual upgrade. While the battles (the parts that matter most) can now be viewed in 1080p, the title screen and menus are still their old, fuzzy, 4:3 selves. It isn’t a huge problem, but it’s a strange first impression to go into a game expecting a clean presentation and be met with pixelated opening screens pulled straight from the year 2001.

In battle, the resolution increase works as it always had: instead of sharpening up the graphics and textures it presents a larger field of view. In other words, each worm, sheep, and banana bomb maintains the same sprites and animations, but the camera is zoomed out so everything appears smaller.

Functionally, this is a welcome improvement. Taking long shots and planning big moves (especially the twitch action of the Ninja Rope) are easier with the entire level in view. Calling down an Armageddon and seeing every meteorite hit is a delight. Aesthetically, it doesn’t feel like a remaster at all. Eschewing the 3D elements found in Worms Revolution, the looks of these worms and environments are the classic 2D versions, unchanged since 1997’s Worms 2, only now we can see more of them at a time.

By and large, this is the same game that released in 2001. Play as a team of well-armed worms. Use an array of conventional (bazooka, grenade, shotgun) and unconventional (banana bomb, flying sheep, old woman) weapons to blow up, maim, drown, and otherwise murder the other team. Part turn-based strategy, part action platforming, part artillery game. For many, just being the same game as before is enough. After all, Worms is an institution in gaming for a reason.

Still, there are some design elements that betray how dated Worms World Party is. In addition to being ugly, the menus aren’t intuitive. Some require a single click to enter, others a double click. Most are represented by images that aren’t self-explanatory. After setting up a custom game type so I could practice with the Ninja Rope, I couldn’t figure out how to set indestructible terrain.

The campaign is a collection of unconnected scenarios. Some are clever and some teach players a new technique or idea, but there isn’t much of an impetus to do any of them. Worse, the mission descriptions are often obtuse or incomplete, forcing players to play and replay missions just to understand them or to know what “surprise” pops up halfway through. This is exacerbated by a lack of a way to quickly restart; a failed attempt results in players being kicked back to the menu, forced to click through a text box and to restart the mission, and made to wait for it to load up again. At the very least, load times are quick now that the game isn’t disc-based.

The merit system is also never explicitly explained, so new players might be confused why a sloppy, “by the skin of their teeth” run might net a gold medal and an expert, no damage run might only be worth a bronze. It’s a simple system once you know (it has to do with the number of attempts since the last victory), but it isn’t ever spelled out. Worms World Party does this a lot. It assumes players already know what they’re doing, which made sense when it first released on the heels of Armageddon but is less welcoming today for new players (or rusty ones like me).

Of course, the main selling point of a Worms game is the multiplayer. With six-team local or online action and a bevy of options to tinker with, this does what it needs to do. I did log onto WormNET prior to launch and found exactly zero others online. This will live and die with its community, so we’ll keep watching post-launch to see if it’s thriving or withering.

Worms World Party Remastered might be the go-to PC Worms experience for hardcore fans of the series with a taste for nostalgia. It definitely doesn’t serve as a good place to get started for those who might want to try the series out. While it looks a little shinier than it used to, it still doesn’t look new, and it certainly doesn’t play like a modern game.