The Worms series has worked well as a downloadable franchise, finding a good home on Xbox Live Arcade and PlayStation Network. Fans of turn-based strategic combat have enjoyed the simplicity and fun of the series, and as such, the titles have sold well.

For its newest iteration, Team17 has taken a step forward by adding a slew of new options, while simultaneously taking a step back. 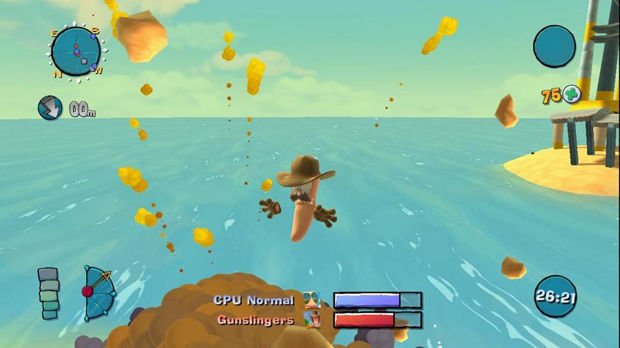 For the uninitiated, Worms is a turn-based, pseudo-strategy title in which one faction tries to take the other out with a variety of terrain-destroying weapons and maneuvers. Most previous entries have been presented in a 2D side view, but some, like this one, are in 3D.

The first time you boot up the game, a bizarre video begins, explaining the world of Worms but not quite how you play. The tutelage is instead left to a very lengthy tutorial mode, which is thankfully separate and optional from the main game, as it tends to last almost as long as some of the actual story missions. Though the tutorial usually only provides you with one or two team members, the story mode gives you a few more.

To call Worms Ultimate Mayhem a new game is a bit of a misnomer. The title is actually a re-packaging of both Worms 3D and Worms 4: Mayhem from the PS2/Xbox/GameCube days. There is a lot of material here, but for most fans of the franchise, not a lot of it is new. All of the story missions from Worms 3D (and most from Worms 4) are here with no enhancements or anything. Not that anyone plays the Worms titles for the single-player mode, but it is of note in this situation. 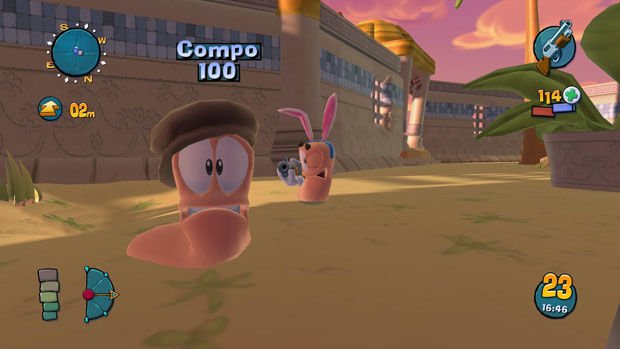 In fact, there are six different modes for single player — quick match, two story modes, two challenge modes, and a tutorial. While they offer a variety of mission types, the controls take all of the fun away from them. You have missions where you’re set to steal tools or destroy enemy bases, but the slow, plodding manner in which worms maneuver, coupled with the turn-based style of gameplay, makes for very long, boring missions.

The 3D is the game’s biggest hindrance. The camera view, even in first-person mode, doesn’t allow for careful lining up of shots; once a shot is made, sometimes the view restricts you from seeing the impact of your hit or how much damage your foe has taken. Likewise, the terrain destruction is greatly reduced, which eliminates any of the tunneling aspects of the previous entries, as well as the fun of creating huge craters in which to lose enemies.

Speaking of enemies, I know they are worms, but do they really have to have the same brains as those creatures? The enemy AI in single player is terribly inconsistent. Either the worms have perfect aim, taking you and your team out with the ease and skill of master trick shooters from the cast of Wanted, or they turn into Ernest P. Worrell and blow themselves up. 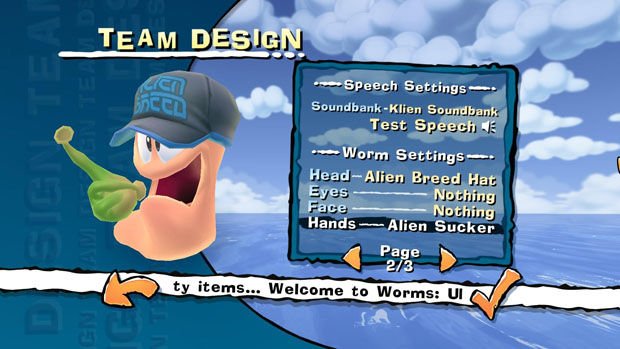 But like I said, no one plays Worms for the single-player mode. Multiplayer is where it is, with plenty of new maps and weapons to try out locally or over Xbox Live. About the only real addition to the game is the well-done variety of maps upon which to terrorize your opponents, but again, the camera and pacing prevents any real sense of accomplishment beyond “wow, I finally hit them.”

There’s a decent amount of customization involved, allowing you to deck out your team in your own style of outfits, accents, and the like, with more options earned by completing missions or buying more materials with coins. While they ultimately serve no real purpose other than to distinguish the players, they do offer the opportunity to create worm teams completely unique from any other.

Worms Ultimate Mayhem is truly a strange beast. As a fan of the series, I really wanted to enjoy myself, but the constant fighting with the camera, poor enemy AI in single-player, and terrible pacing keep this one from the top of my list of strategy shooters. It’s not terrible by any stretch of the imagination… it’s just not very good, either.