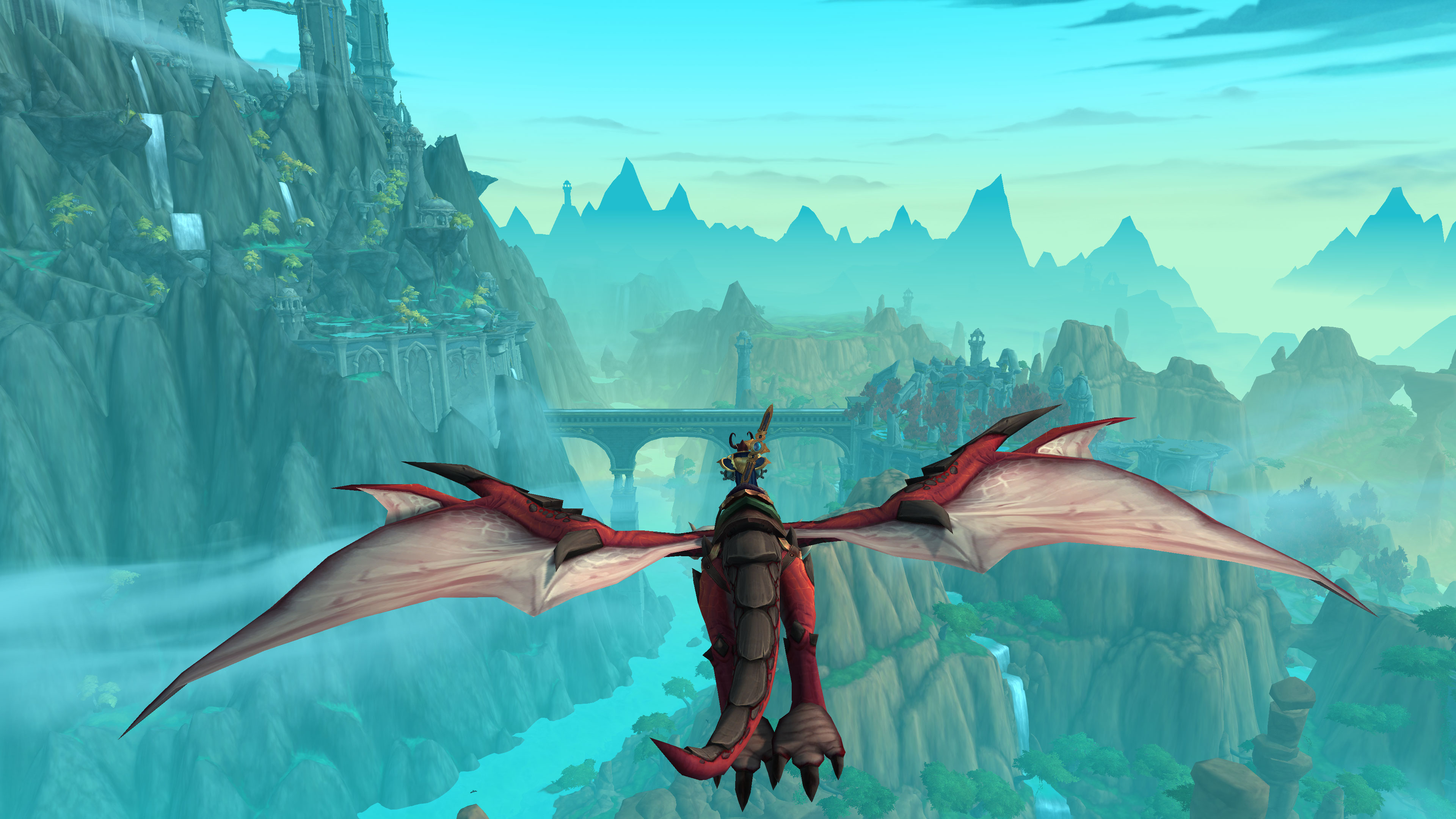 With few execeptions, World of Warcraft expansions generally deliver at launch. This is the honeymoon period. The part where you’re just getting to a new theme park for the first time, all the rides are fresh, and the food tastes good: before you start to get bored, and you realize they use too much salt.

WoW: Dragonflight takes a long time to get to that point: perhaps longer than most expansions in the series’ history. It’s a great direction for WoW, and it’ll be interesting to see if they keep it up. Dragonflight‘s big gimmick involves flying mounts: but with a twist. After the initial hour intro, you’re given the opportunity to command your own dragon, which can be used to fly immediately in the expansion. There’s a catch though! You can’t just fly freely everywhere: as mounts contain charges of momentum, which can be used to gain height or dash forward quickly. This entire concept is integrated with the new zone of the Dragon Isles.

Although there is urgency in the narrative, nearly everything is bright. It’s fun to explore, and you can go pretty much anywhere in the Dragon Isles as soon as you have your mount. The ability to customize it and level it up (notably, to add more flight charges) to the point where you’re flying around like a master is genius, and a great way to ensure that you don’t see the same mount flitting around hundreds of times.

The locomotion of flight is handled really well in the expansion to boot, as you can dive to recover charges and gain momentum to the point where efficient flight feels like a learnable skill. Taking a page out of Guilds Wars 2, I completely ignored the main story for around 10 straight hours over the course of a few sessions: flying around and trying to locate random scavenger hunts and oddball sidequests.

One big running theme throughout Dragonflight‘s release is that it doesn’t beg you to log in to do busywork. While a few keystone expansions were built around dailies and weeklies at their core (or borrowed power): the entire appeal of Dragonflight is free form messing around. Discovering hidden objects or races, sans guides, was a big pastime of mine.

While the narrative doesn’t take a backseat, it does feel like more of a slow buildup: which works for me. A few past expansions have really gambled with trying to introduce a new big bad right off the bat, and not all of those approaches land. Here, the world is the main focus, which is uh, kind of important in the MMO genre!

There are, of course, cracks in the seams, which is more of an overlying World of Warcraft problem. A lot of old systems are still inelegant (including a few of the ho-hum dungeon layouts, which, like Final Fantasy XIV, is a hard habit to break for designers), and there will be plenty of daily and weekly events to come. It’s give and take, which is always the case with the genre. Of course, the other big draw of the expansion is the Evoker class, and Dracthyr race (which are one and the same). Think of it like a hero class (it even starts at level 58, which is expansion-ready): with the power to flex into ranged damage or healing. While I’m focusing on my main right now, the Dracthyr are a neat addition, despite my qualms with the overall art style of the designs themselves. Interestingly enough, Dracthyr have a lot of moment-to-moment gameplay decisions, including the raw power of flight. Plus, there’s some race-specific dialogue to be had. I’m definitely going to work on maxing out one over the course of the expansion.

All this is accompanied by a rework of talent trees (the results are positive so far, based on my time with my alts), as well as a mix-up of how professions work. While I can confidently say that beyond raid-ready items I’m not a big purveyor of professions, I have been dabbling in them more and more in this expansion: possibly more so than I ever have in the past.

In WoW expansions, I generally make it a point to get to max level (here it’s 70) at a decent speed, so I can get to the “good stuff” (while this isn’t an all-encompassing statement, it is generally true for many mainstream MMOs). In Dragonflight, I stopped often to smell the roses. That’s kind of how an MMO should feel, and while WoW has accomplished that at various points in its history, it’s done well for itself here. It’s a windfall of a reinvention of many top-down processes, which is good news for the future of the game.

As was the case with Legion taking us out of the dour mood of Warlords of Draenor, WoW has risen from the ashes once again. The theme park roteness has eroded in the era of Dragonflight, and it came at the perfect time: at one of World of Warcraft‘s lowest points following the mid-to-late Shadowlands period. While there’s a chance that this expansion could drop the ball, so far it’s looking good. I’m still having fun flying around by myself, while interacting with the MMO bits as I see fit.

Filed under... #MMO#PC#reviews#World of Warcraft