Chocobos and moogles and cactuars, oh my

Final Fantasy XV is out soon, but all of my attention has been on this year’s Final Fantasy little brother, World of Final Fantasy. Despite that it isn’t part of the main series and its central mechanic is monster collecting, it feels very much like a core entry.

With that comes good and bad. Mechanically, it hits the right level of complexity where formulating long-term strategies is satisfying but executing a single battle is tactically simple. From a narrative perspective, it’s overwrought and melodramatic, full of genre clichés and cringeworthy dialogue. It’s well worth playing, but not for the story. 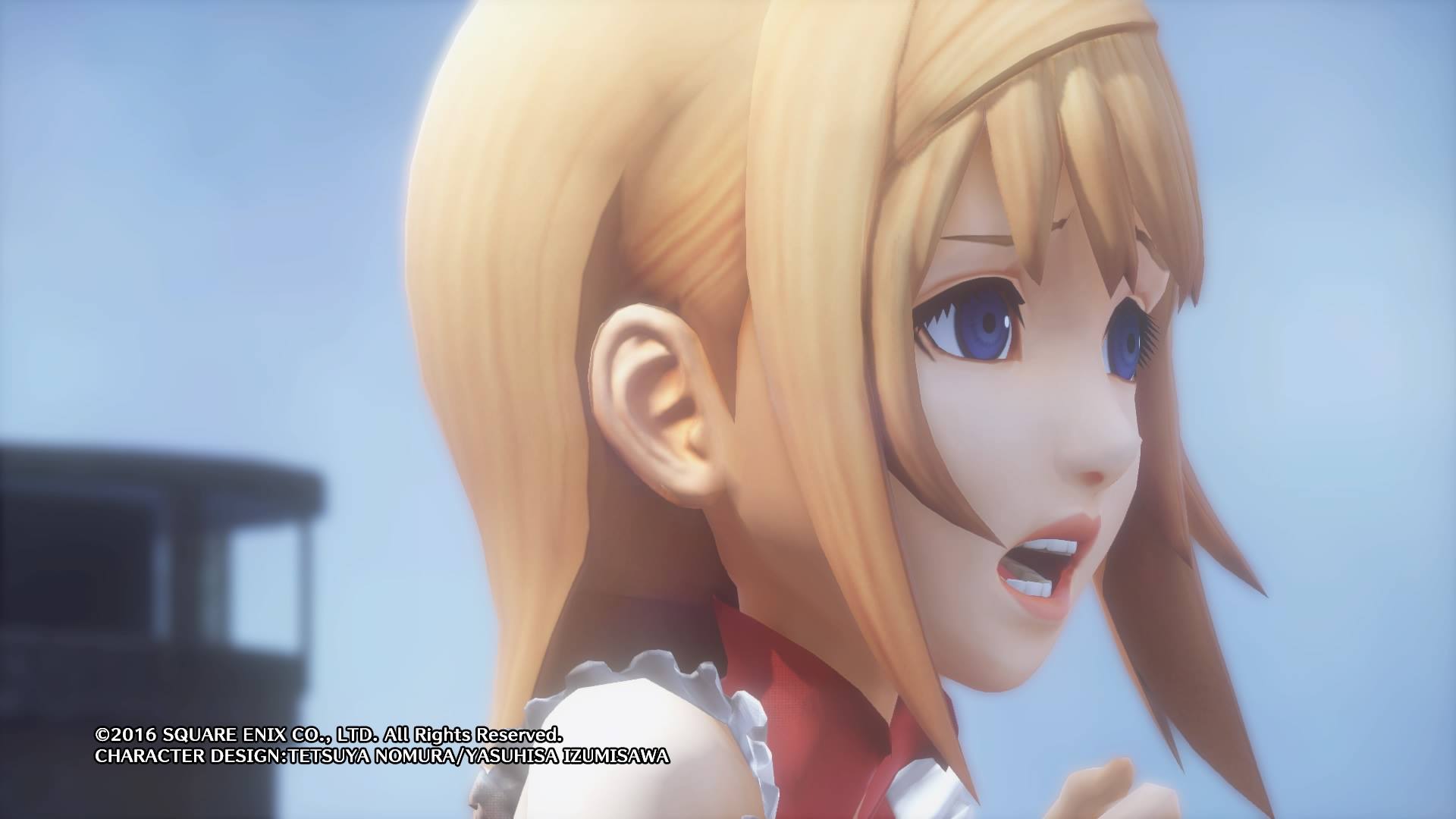 It was noted in the review-in-progress, but it bears repeating: nostalgia is the name of the game here. Between the appearance of characters originating from Final Fantasy I all the way through Final Fantasy XIII, the inclusion of famous lines of text (like “spoony bard”), and remixed music from the series, World of Final Fantasy lays the nostalgia on thick.

It’s a joy for anybody who has followed the series over the years, but so much of it falls flat for newcomers. In one section, the cactuar train conductor is eluding protagonist Reynn while taunting her. I sat there giggling about it, while my wife, puzzled, proclaimed “Cactuar is kind of an asshole.” That just made me laugh more. Upon reflection, there’s nothing inherently funny about the scene without having the context of cactuars being slippery jerks.

This semi-failed attempt at humor is more apparent when references to old material aren’t in the mix. There’s a fair amount of banter among the main traveling party. Reynn, the older twin is analytical and even-keeled. Lann, the younger sibling is hot-headed and dumb. Too often Lann’s lack of intelligence is played for laughs when that’s the only punchline: Lann isn’t smart. It gets old.

Compounding on that is the twins’ mysterious companion Tama, whose voice (high-pitched and excessively sugary) and unusual speech pattern (she the-adds the word “the” in front of words in her the-sentences), is especially grating. There are too many vignettes of Tama and Lann going back and forth for comic relief. It’s cute at first, and it’s nice to have a Final Fantasy that isn’t constantly dour and serious, but the comedic writing isn’t strong enough to sustain the scenes throughout the 50-hour campaign.

When World of Final Fantasy‘s story does get serious, it follows well-trodden ground. Reynn and Lann have amnesia. They want to figure out who they are. To do that, they need to collect four keys to fulfill a prophecy. It’s very by-the-numbers, easily ignored as a dull but necessary component for presenting past Final Fantasy characters in chibi form. 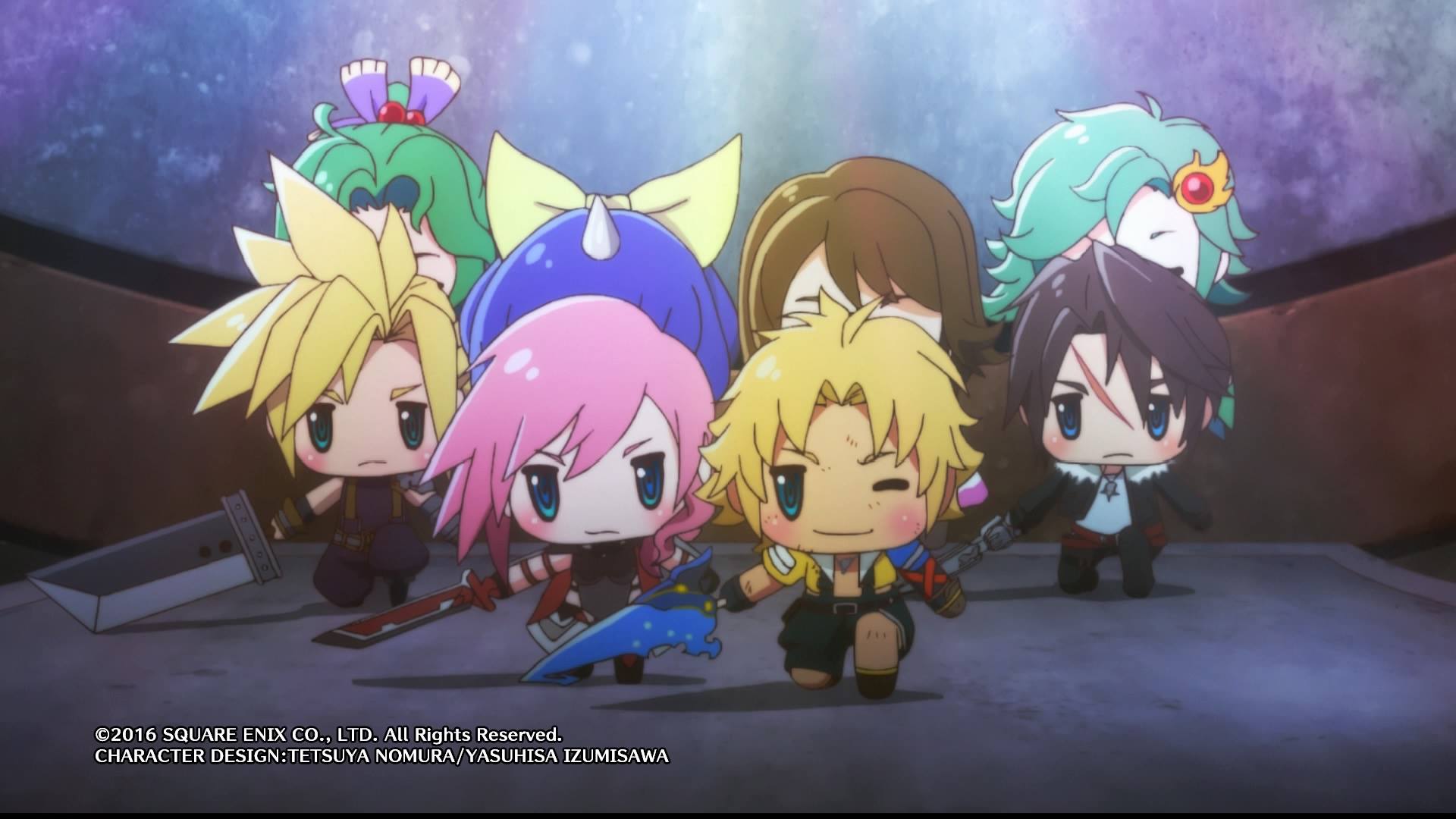 At that, I was hoping for a better explanation for why all these heroes from canonically separate worlds have all come together in Grymoire to support Reynn and Lann’s story. There are hints toward this end, but nothing concrete. At first it seemed like World was going to tie all of the FF games together in a sort of alternate universe scenario, but it mostly ignores this thread instead of explaining it.

At the very end, the story does threaten to become interesting, but just when things start picking up and Reynn and Lann begin feeling more three-dimensional, the final boss fight hits and then the (adorable) credits roll. 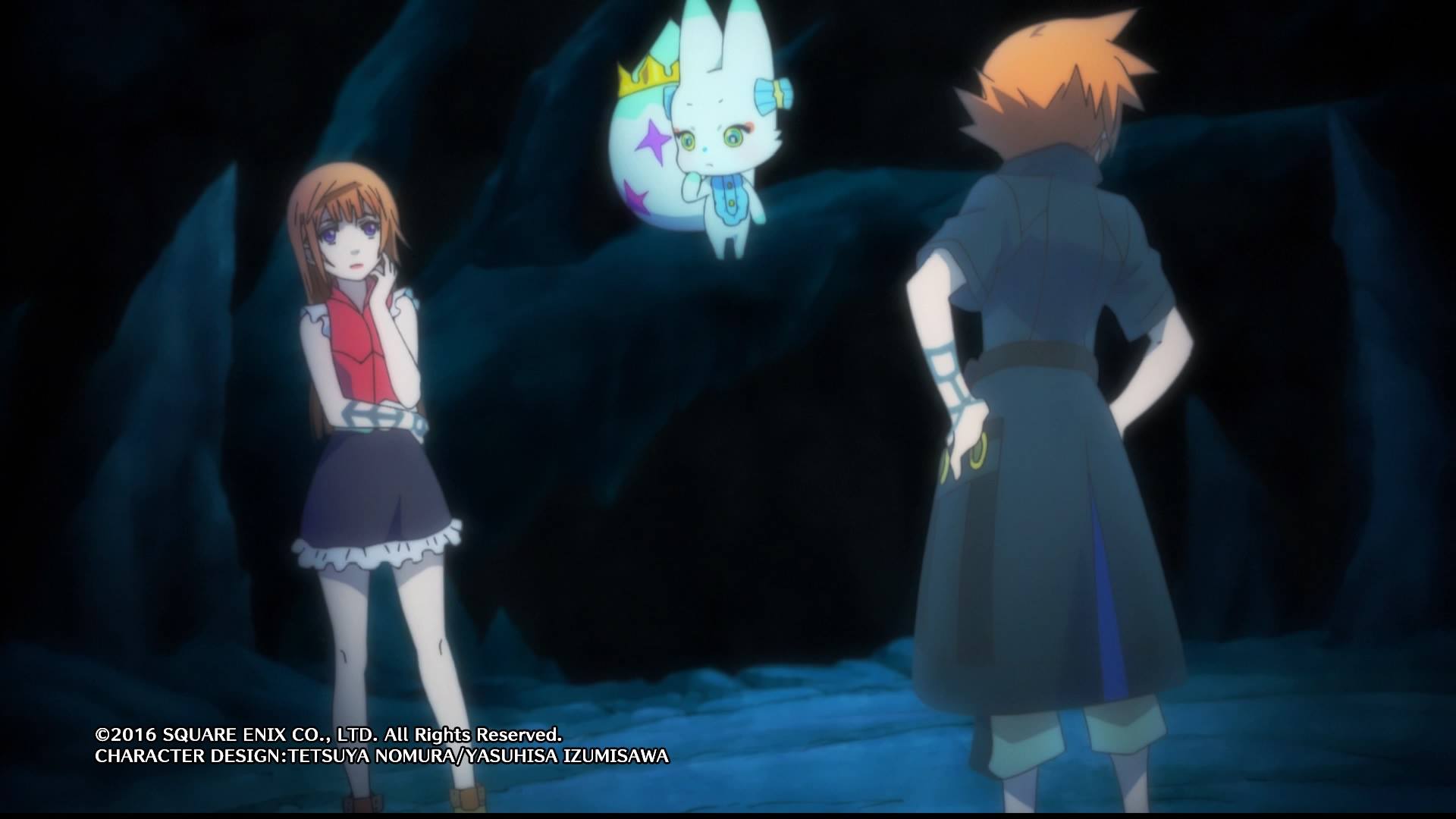 The thing is, even after finishing a story that is generally bad or at the very least boring, I’m still compelled to play World of Final Fantasy. And that’s because the moment-to-moment action is just so good.

Most Final Fantasy entries have a system in place to customize the party’s abilities. In Final Fantasy VII it was Materia, which could be swapped in and out between characters. In Final Fantasy X it was the Sphere Grid, which started each character down a specialized path but ended with all characters able to become masters of anything with enough time put in. In World of Final Fantasy, it’s the monsters themselves that act as character customization.

Reynn and Lann are each accompanied by up to two monsters, with the characters forming singular units called stacks. Each stack takes on the abilities and stats of its constituent characters, so a stack with a Bomb and a Flan will be able to cast both Fire and Water magic. More interestingly, a stack with a Bomb and a Red Dragon will double up on fire abilities, allowing for more powerful magic like Fira. 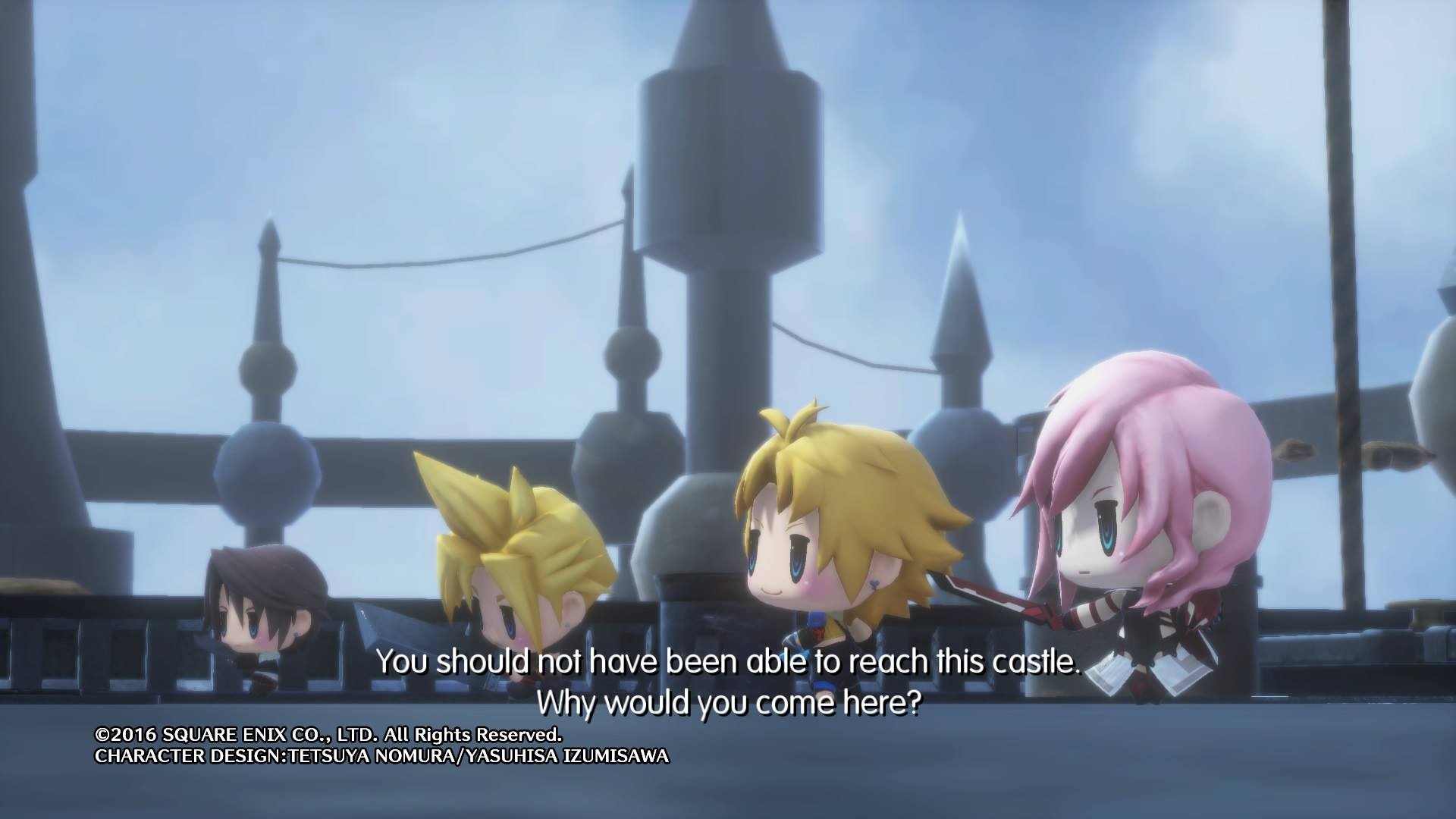 So much of the strategy comes from choosing which monsters to take along and which to leave behind for later. While traveling through the lava-filled area rife with monsters that cast Fire magic, I stacked (heh heh) my team such that I would absorb any fire damage to recover health. It’s especially satisfying to have an area’s boss unleash what would normally be a devastating attack and to just shrug it off due to good planning.

While that’s a more defensive take on team composition, another totally viable strategy would be to pile on monsters that cast Water magic, in order to fully exploit the weaknesses of the local beasts.

One slight downfall to having to switch out party members in order to adapt to changing environments is that each monster has individual levels and boosting up new recruits is a bit more time-consuming than I’d like. About halfway through the game I constructed stacks I liked quite a bit (both Reynn and Lann in chibi form riding on FFVI‘s Magitech Armor) and I only ever switched them out when up against enemies with Thunder magic. 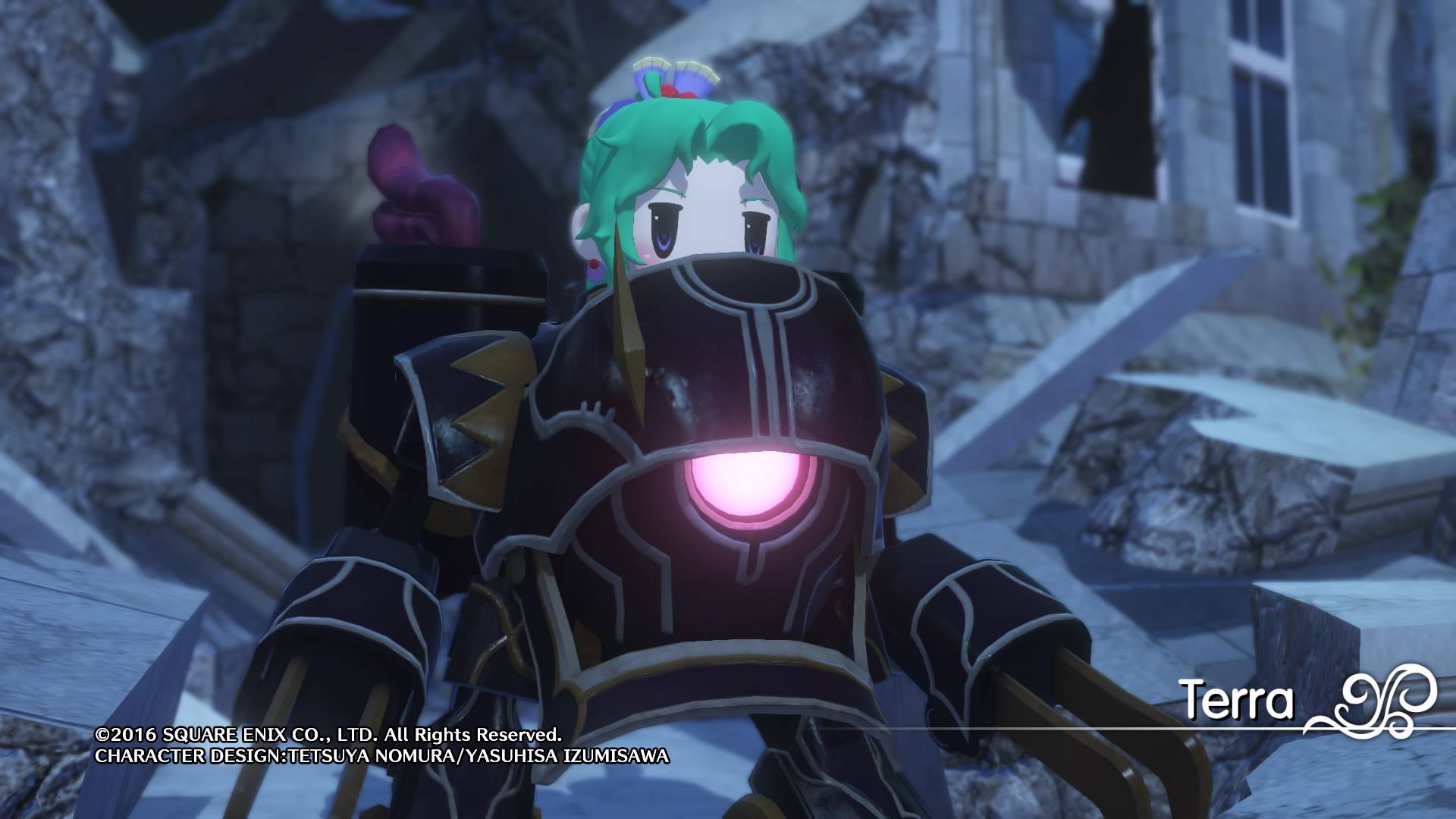 With the way progression works for each monster, it rewards having a main team more than constantly changing party members out to suit the situation. There are stat bonuses that hit every 25 percent of the way toward full mastery, and then one powerful special ability once a monster is maxed out. Even though I filled up the Magitech Armor’s Mirage Boards before finishing the story, I rode it out on them since they were just so powerful. It actually made the final dungeon fairly trivial.

The upside is it adds a ton to do for completionists. Though I found a comfortable team to work with in most situations (and even modified its abilities to make up for its shortcomings), I still want to max out some of the other series staples like my cactuar (Jack), chocobo (Boko Jr.), moogle (Mog Jr.), behemoth (Scruffy), and malboro (Halitosis). Yes, I name every single one of my monsters. 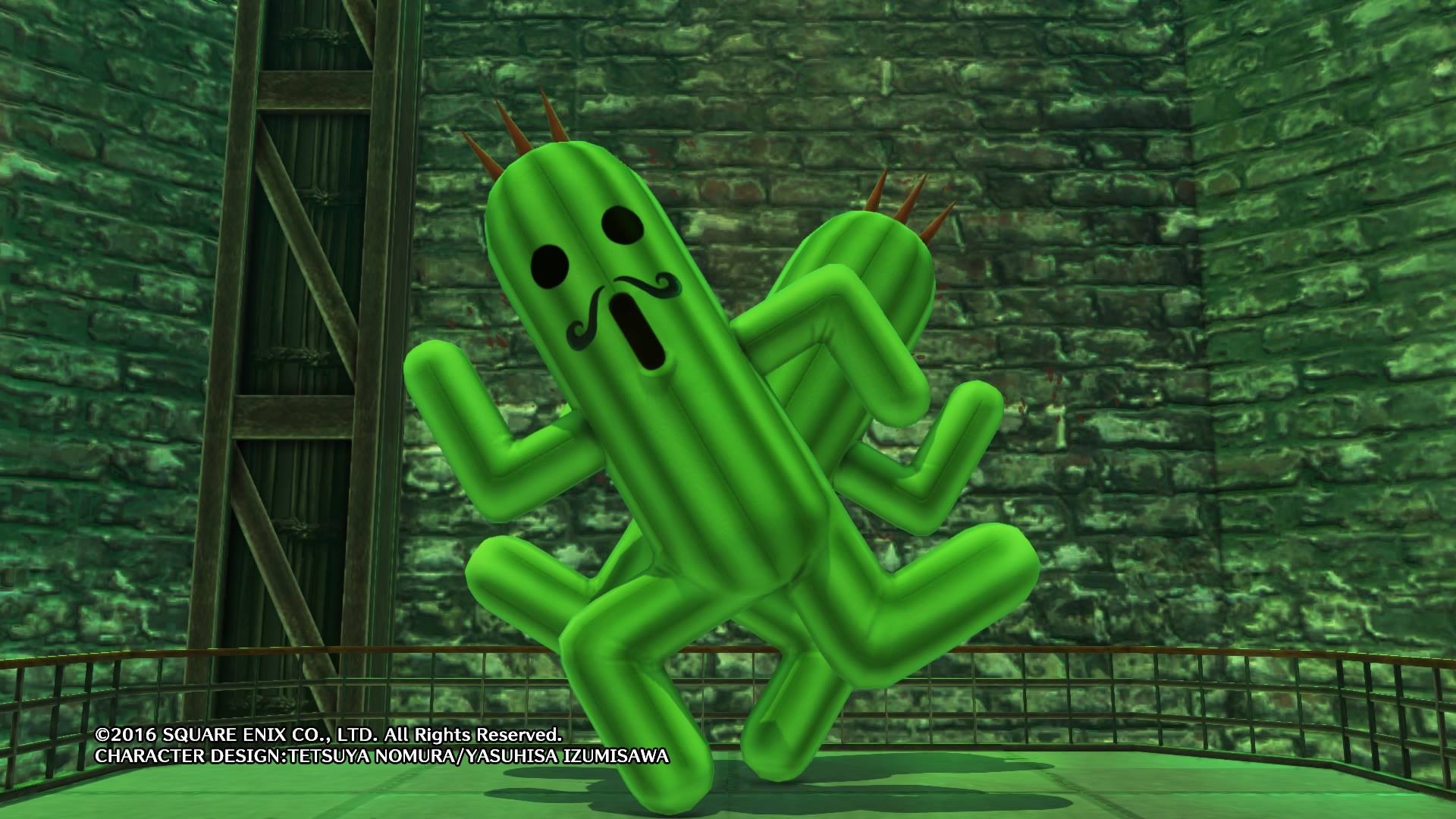 It’ll be a grind, but I’m still eager to do it. There are just so many recognizable monsters that hold special places in my heart, it seems like it would be a disservice to neglect them. Plus, there are the post-game bonus dungeons that aren’t going to conquer themselves.

That’s World of Final Fantasy in a nutshell. For those invested in the series up to this point, it’s so worth playing. It’ll mean a lot to the fans to go on an adventure, fight, and grow with the monsters that were only ever enemies in the past. Its weak story detracts from the experience a little, but the power of well-done nostalgia farming overshadows it easily.