Sisters Are Doin’ It for Themselves!

Wolfenstein II: The New Colossus has become an incredibly divisive game since its release in 2017. While it brought some hefty and frenetic gunplay with excellent presentation, the actual gameplay aspects took a backseat to a poorly written and sloppily paced story mode. While BJ Blazkowicz was still a fairly deep and interesting character (along with being portrayed wonderfully by actor Brian Bloom), most of the supporting cast were caricatures in the vein of grindhouse films without any of the same charm. It also didn’t help that the story mode peaked around the mid-point and petered out without much fanfare at the end.

When Wolfenstein: Youngblood was announced, I was happy that MachineGames was sidelining BJ for a bit. While the man is captivating and a clear anchor for this series, taking a step away from the legendary figure to focus on his offspring could lend some new ideas that may strengthen the inevitable Wolfenstein III. Breaking it out into a co-op game, too, could allow for a stronger focus on gameplay versus the overwhelming story bits from II.

MachineGames has certainly succeeded in catering more to the gameplay aspect than last time, but it hasn’t quite nailed the same formula that made The New Order feel so refreshing five years ago. 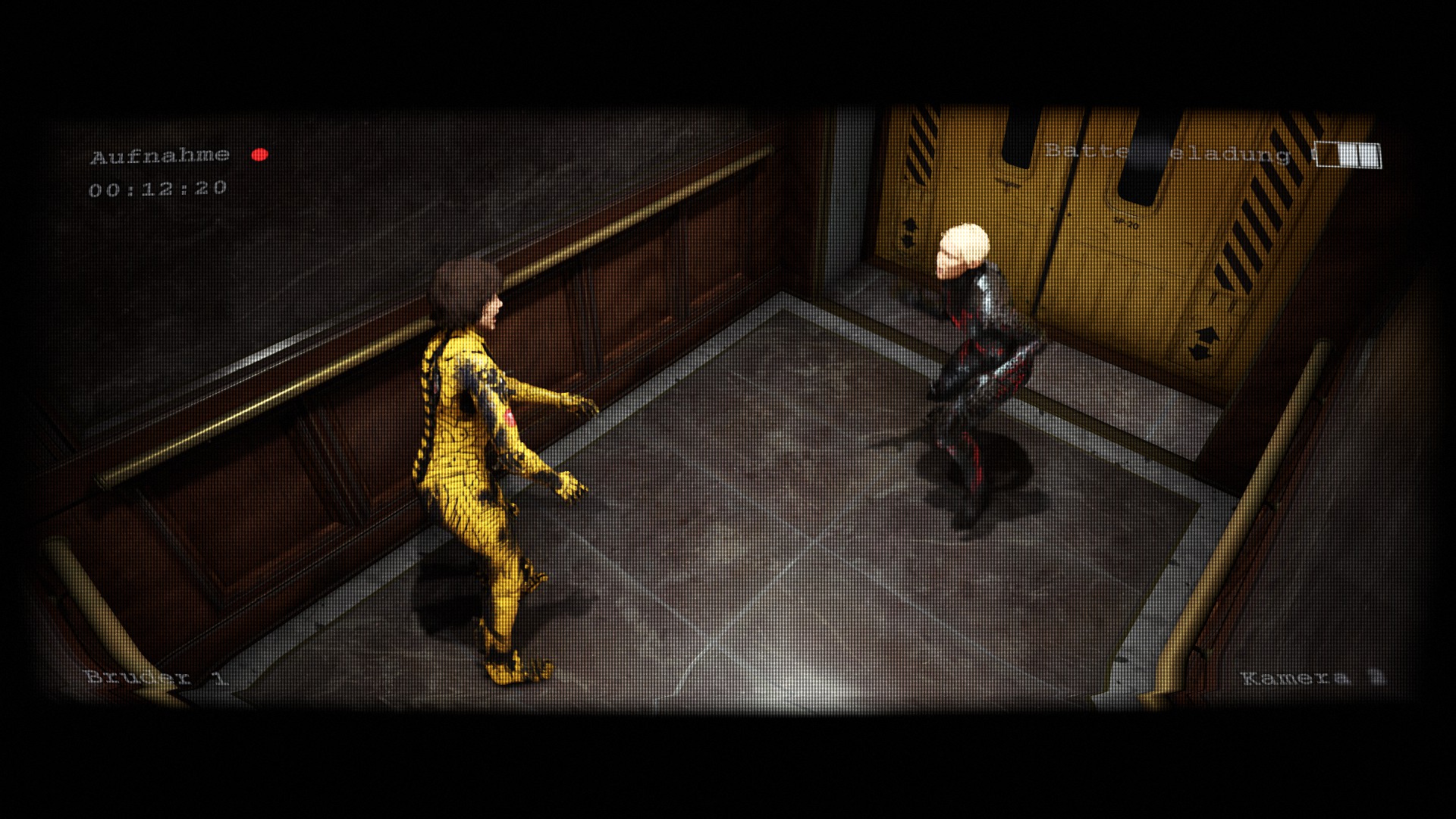 The beginning of Youngblood makes it seem like this will be another story-heavy experience like Wolfenstein II. In a cutscene where BJ Blazkowicz’s children, Soph and Jess, are training, the iconic figure gives a speech about how the girls need to be aware of their surroundings at all times. It’s a clear setup for the new co-op focus, which sees you and a friend blast Nazis together and have each other’s backs. BJ is basically a god, at this point, so he knows a thing or two about spotting Nazis without looking.

After that, Youngblood cuts to you and your partner on a mission in the Paris Catacombs. With Hitler dead (spoiler alert, I guess), Soph and Jess are tasked with mopping up the stragglers to the Nazi regime. When you return, you discover that your father has gone missing on his latest expedition into the heart to the Nazi forces. Not a duo to sit around and wait, you take up arms in locating your father and purging the Nazis from this world once and for all.

That’s really about the gist of the story, too, because it takes a backseat to what Youngblood is really about: shooting Nazis. As I said above, the gameplay portion of this latest Wolfenstein game is tipped far more in favor of letting players interact with its game world than New Colossus was. That’s kind of a blessing and a curse because I’m still not quite sure how I feel about it.

I’m also not sure I’m totally down with the changes done to the formula here. Previous Wolfenstein games were more like old-school shooters in that you only had to worry about enemy positioning and ammo counts. They operated with very light RPG and upgrading mechanics to give you a sense of progression throughout your playthrough. Youngblood might as well be called Borderlands: Nazi Edition because this is pretty much a looter shooter with heavy RPG mechanics.

As you kill Nazis, you’ll gain experience that levels you up. As with any RPG, you gain permanent stat boosts for each level and are awarded experience points to invest in various attributes. These take the place of the perk system in the last two Wolfenstein titles. In those games, using guns and performing specific actions gave you permanent upgrades for BJ that would increase his fire rate, give him more health and ammo, or allow him to move silently.

For Youngblood, you’re now working through a skill tree that you unlock with the aforementioned experience points. A separate currency of silver coins also factors in by allowing you to unlock weapon upgrades, cosmetic options, and “Peps,” which are co-op specific actions that provide temporary boosts to you and your friend. You’ll find things like a health booster that restores 50 health upon use, to a power-up that will grant you 10 seconds of invulnerability for getting out of tight situations. 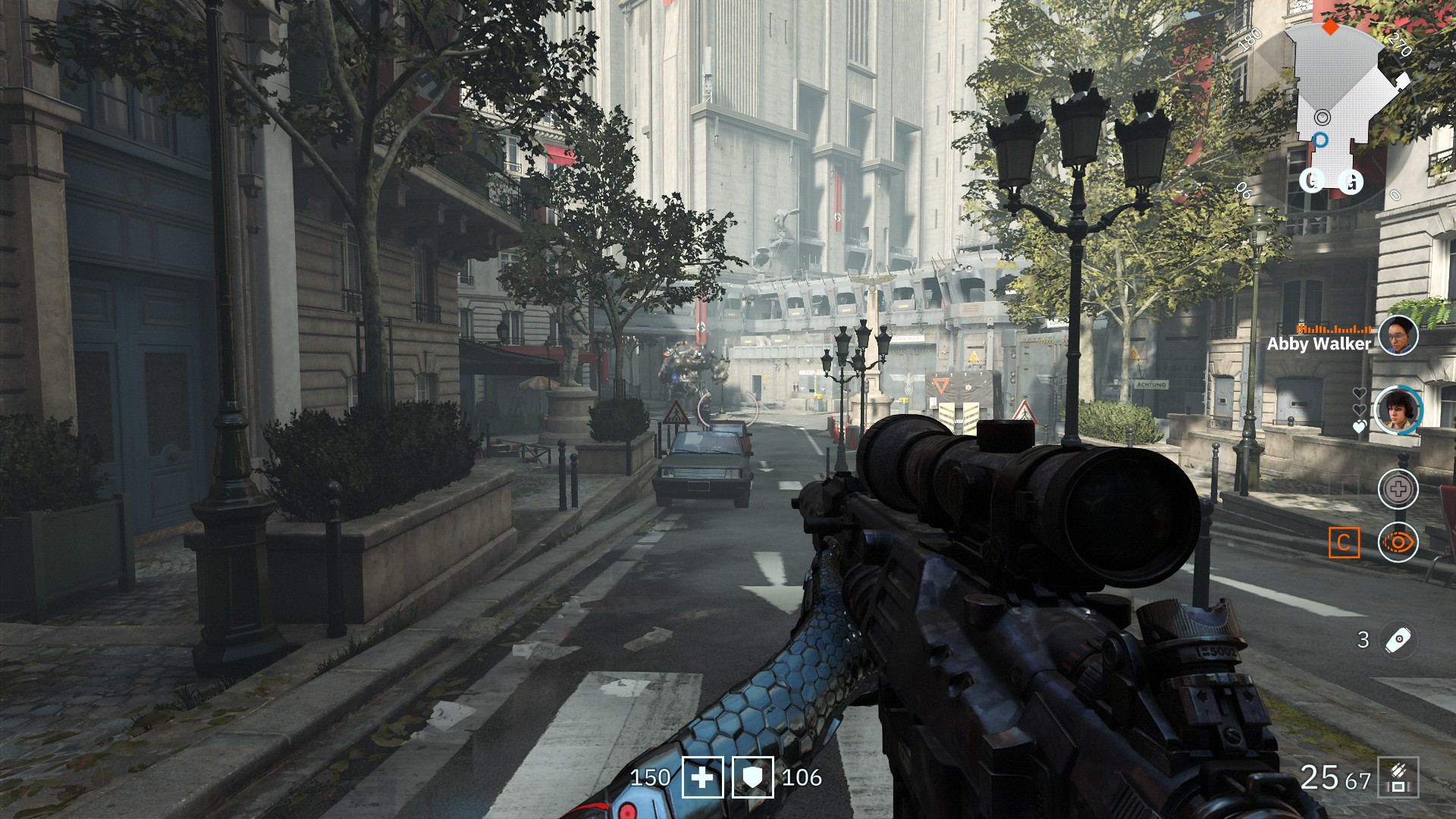 I can’t believe I’m writing this all out in regards to a Wolfenstein game, but Youngblood really does buck the trend of what you’d expect. This even follows into the level design, which has far more sprawling and open-ended layouts than the three games before it. Thanks to the guidance of Arkane Studios (famous for Dishonored and Prey), Youngblood almost feels like Deus Ex with how many different pathways you can take to reach the same location. This isn’t an open-world, mind you, but more a sandbox than the linear corridors of what MachineGames previously did with Wolfenstein.

It’s really the best aspect of the game because the RPG systems make the gunplay stumble quite a bit. Instead of being a skill-based shooter, this is now a numbers game and you’ll get instances where you’re unloading entire machine gun clips into an enemy without them falling. I’m especially taken back by how the pistol, which was super versatile for stealth takedowns in both The New Order and The New Colossus, is now practically worthless since it can’t perform headshots.

The weapons that take the biggest hit are the heavy guns, though. For all its faults, Wolfenstein II had these amazing moments where you’d rip a turret off its mount and go to town on Nazi fools. Much like the neutering of the pistol, the heavy weapons are basically useless against the inflated health bars of your foes. In an interesting move, specific enemies have weaknesses to different guns – which forces you to think smarter about what you’re firing – but it seems none of them are weak against these heavy options. 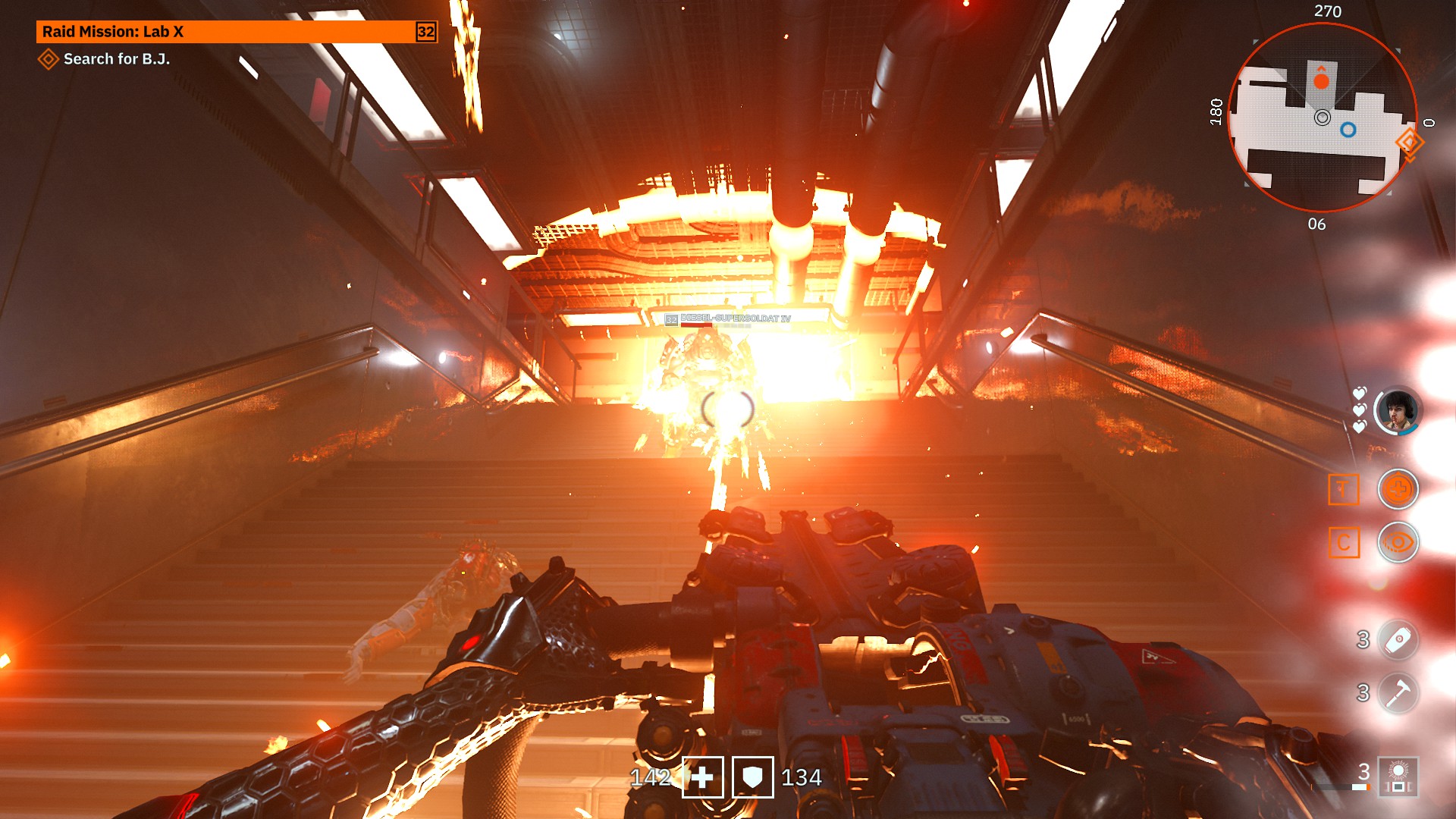 Even with those faults, it’s hard to deny that coordinating with your buddy and striking from multiple points is just plain fun. I’m guessing those health bars were increased because the game would be too easy otherwise. Even on “Challenging” difficulty, the game’s hardest available setting, my co-op partner and I were barely breaking a sweat. It was mostly us ducking behind cover, popping near 100 bullets into a foe, and watching as the AI failed to stick to a single target. There were some amazing bits where I’d be face to face with some jerk, peppering him with bullets with reckless abandon, while my partner was across the map distracting him. It’s kind of hilarious in its stupidity.

What further reduces this difficulty is the nifty system put in play for when you are downed. While there was obviously going to be a revive state (what co-op shooter doesn’t have that?), Youngblood provides you with a shared life system for getting out of tricky situations. While this doesn’t avoid the problem of being downed while stuck in a revive animation, the game doesn’t immediately end when both players are at zero health. One of you can opt to spend a shared life to heal on the spot and get back into the action. When you’re out of those shared lives, then the game is over and you’ll need to reload your checkpoint.

Bafflingly, the checkpoints are spotty as hell. While the early missions saw us getting regular saves in scene transitions, the later ones restarted us completely from the beginning after death. We’d get to the boss encounter (of which this game does feature a few), die, and have to navigate through the whole map again. You don’t lose your XP or loot, but it’s a total pain in the ass to shoot the same foes again in what feels like artificial padding of length. The same could be said for the completely unnecessary co-op actions – such as both of you having to open a door together. It also doesn’t help that the Nazis level-up alongside you, making the whole XP system feel redundant. It’s mostly a reminder that you’re playing a video game instead of an interesting new development. 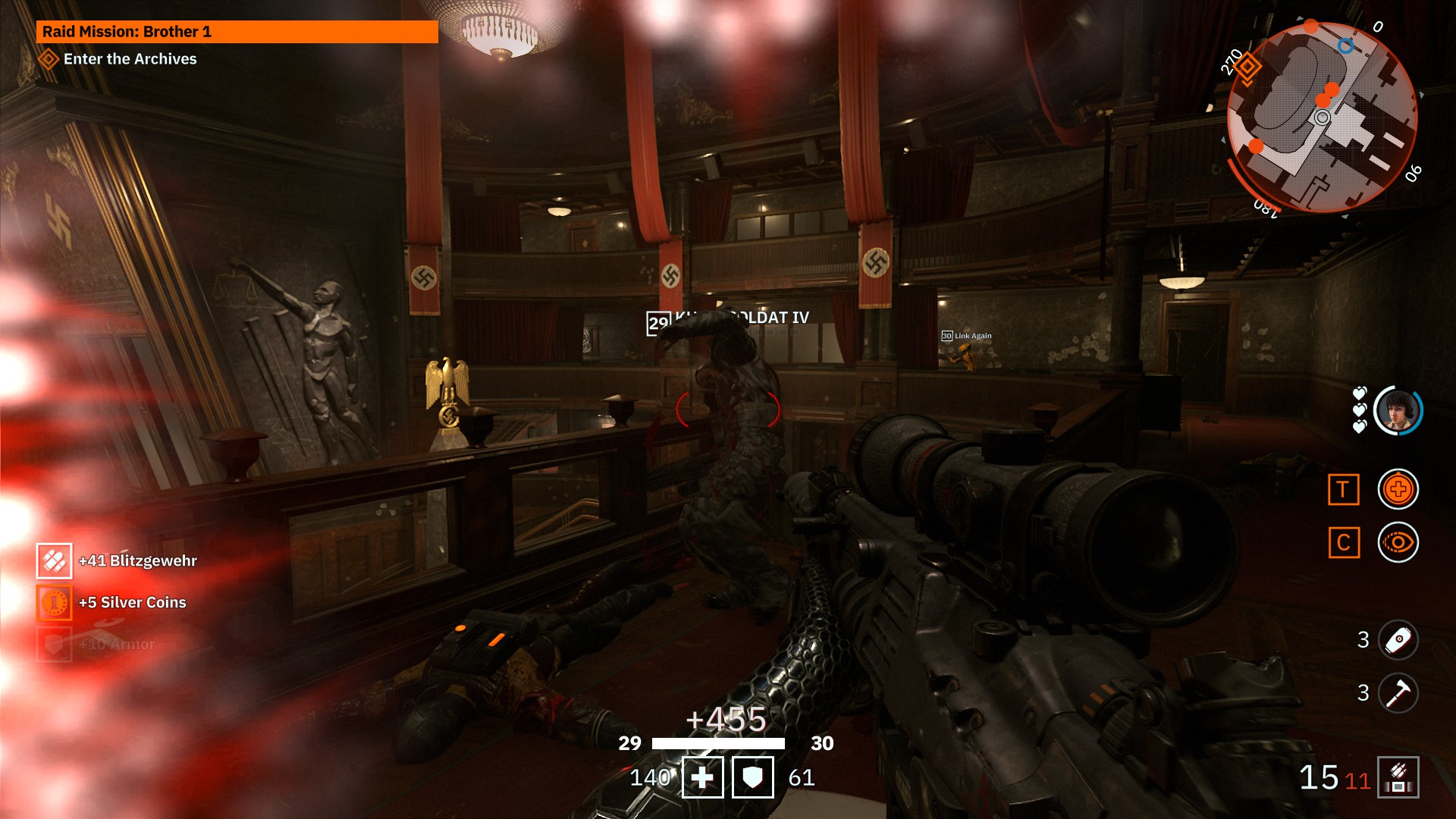 Worse still, my co-op partner and I were never quite sure what we were doing. The main missions are not clearly marked, and there are practically zero interstitial cutscenes to keep you motivated. In much the same way that Metal Gear Solid V felt like too far of a course correction from the overloaded narrative of Metal Gear Solid 4, Youngblood might as well be a mod for Wolfenstein II. There is some story, but its presence is rarely felt during the campaign.

That’s a real shame, too, because the dialogue and short interactions between Soph and Jess are honestly a lot of fun. They’re written like idiots, but the way they sound when gunning down Nazis or correcting each other’s mistakes creates an authentic relationship between the duo. You feel there is a lot of shared respect not only for each other, but for their father, and it helps build the Blazkowicz family into this unstoppable force of nature. The sillier elements of Wolfenstein II are still present, but a lot has been done to keep the tone consistent instead of fluctuating all over the place.

I appreciate that aspect and even the well-thought-out level design, but I’m just so torn on everything else. It’s fine to make an RPG shooter, but there isn’t a lot of care taken in incorporating those elements into Wolfenstein. It’s great to let the narrative take a backseat, but you also should remind players what they’re fighting for. Youngblood never feels like a fully realized idea, which ultimately hurts what could have been a great game.

Maybe I just expected too much, but I find myself missing the careful balance of story and gameplay that The New Order had down pat. Youngblood makes plenty of strides forward for this series, but it also takes some steps backward that end up hurting the overall package.