Several big publishers have given up on VR, but Bethesda is forging ahead.

In addition to VR adaptations of Skyrim, Fallout, Prey, and Doom, Bethesda also greenlit Wolfenstein: Cyberpilot, which goes a bit further than its predecessors, directly tying it to the overall mythos; allowing the game to take place after the core entries but before Youngblood.

It’s a shame that in spite of that premise, it doesn’t really strive to make a name for itself. 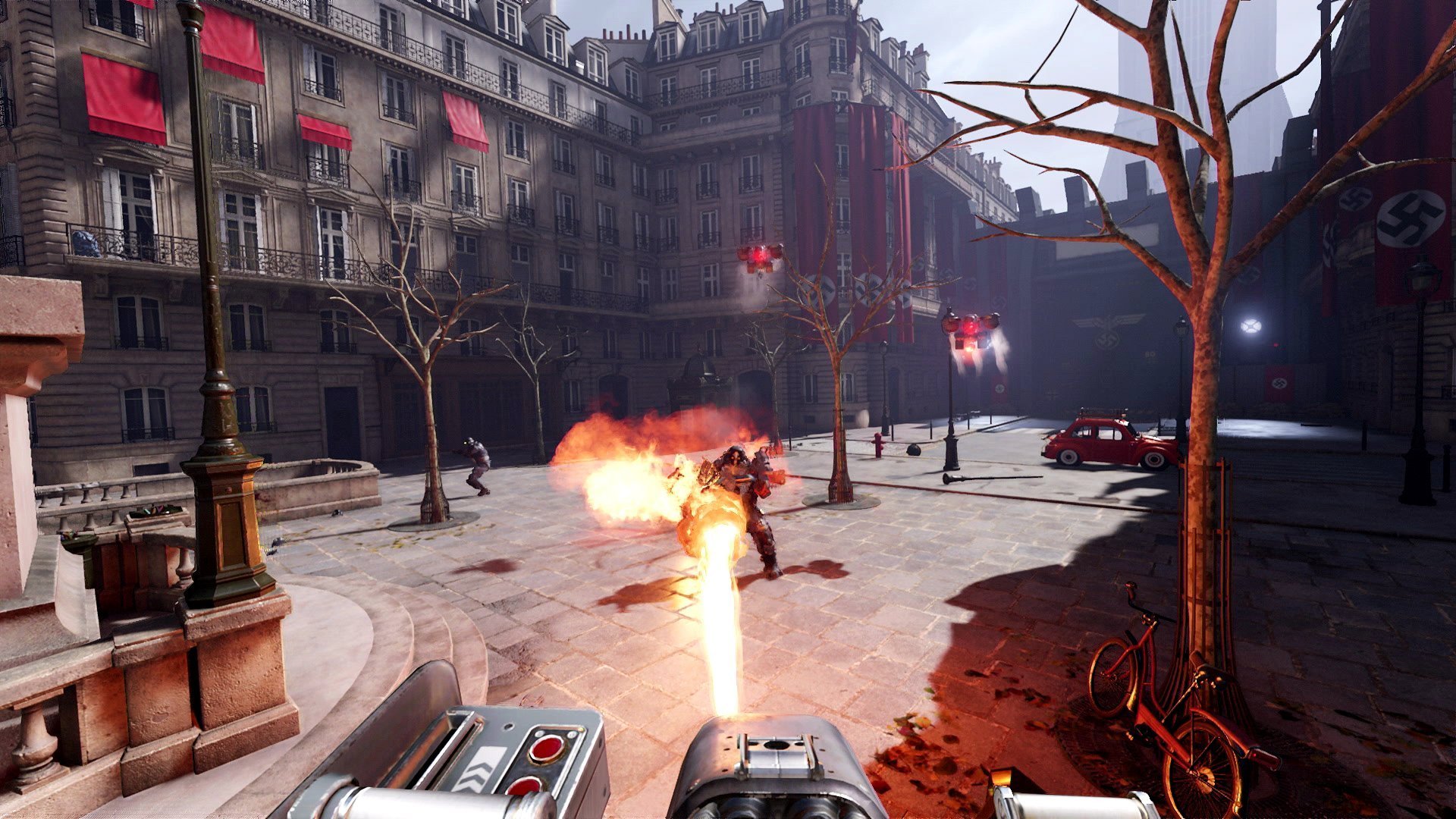 Like many mainstream VR projects, Cyberpilot is a seated experience with a semi-interesting twist. As a random hacker for the resistance, you are charged with taking control of the Wolfenstein universe’s future Nazi tech and…of course, killing them with it. It’s more of a side story but gives us a brief glimpse into the state of the world 20 years after the events of New Colossus, albeit briefly and tangentially. At first you’ll start off controlling a Panzerhund (read: robot dogs with flamethrowers), before moving onto a drone, then a good old fashioned giant mech.

Sorry Peter Molyneux, this game is actually not on-rails (I will never let that go), as movement is free form, though mostly through corridors and planned linear paths. Your aiming reticle is controlled via remote motion control and you press L2 or R2 to trigger your main weapons (like dash attacks, miniguns, a drone zapper, or what have you), or slam a “panic button” to use an ultimate. Keeping things motion-oriented and relegating input to the triggers keeps things simple even for non-VR users. I dig the approach.

I also dig that you can turn off those pesky VR training wheels. Snap rotation (teleport turning) is a pain, so I was glad to see a full toggle for it. You can also remove VR sickness precautions like an obstructed view and just have at it. You don’t really need to exercise that much nuance though, as strafing stumps most of the AI dead in their tracks â — and that’s if they’re being responsive. They also don’t go far enough with levers and doohickeys in the cockpit. My dreams of pulling all sorts of steampunk cranks or slamming buttons are dashed, and the DualShock 4, which tethers both of your hands together, limits that input and thus, Cyberpilot‘s creativity.

It looks pretty impressive visually, though, with heavily detailed environments (all Parisian or in bunkers) and physics concessions for individual objects, even in locations that are mostly for show (like the hub area). It really could have leaned a little more into an arcadey style though. It already goes for it with silly dialogue (like this extremely Aldo Raine line I had to capture and share), so why not? The Metal Gear VR Missions training motifs that teach you about each mech could have been the entire game if they just ran with it.

That’s really the crux of Cyberpilot‘s problems, as it’s just a few hours long. There’s four main missions, with the last being by far the most promising, allowing the player to swap (on cue) between all three machines. By the time the credits rolled I was ready to do that mission over again but there isn’t much else to do. Small diversions like minigames where you have to repair the mechs before missions seem cool at first, almost like the game is building toward some epic puzzles, but never go anywhere and end up feeling like busywork.

It has a lot of potential, but Wolfenstein: Cyberpilot ends before it can reach most of it. Still, I hope Bethesda doesn’t give up on VR. A few games like Doom VFR have been nice optional companion pieces, and I think they could stand to push that concept further, as the fundamentals are there.

[These impressions are based on a retail build of the PS4 version provided by the publisher.]