UK indies Mediatonic sure are a busy bunch. Not only did they release a ton of browser games for the likes of Adult Swim and SEGA, as well as mobile games, but their previous PSP Minis title Monsters (Probably) Stole My Princess was pretty well received earlier this year. And that one even made Xbox Live Indie Games for a cheaper price in August! Talk about having a diversified strategy, eh?

Who’s That Flying?!, or WTF?!, is your standard fare 2D side-scrolling shoot ’em up with a twist. As Earth, the protector of our lovely planet, you are an invincible galactic hero. That means that while you can get stunned by some enemies, you can’t die by being hit. However, being a protector and all that, it’s your job to make sure no enemies make it past you.

That’s where the tower defense element comes in: every city you protect in each of the stages has 50 health. Every enemy that makes it past you costs the city 1 health and translates into less bonus points at the end of a stage. 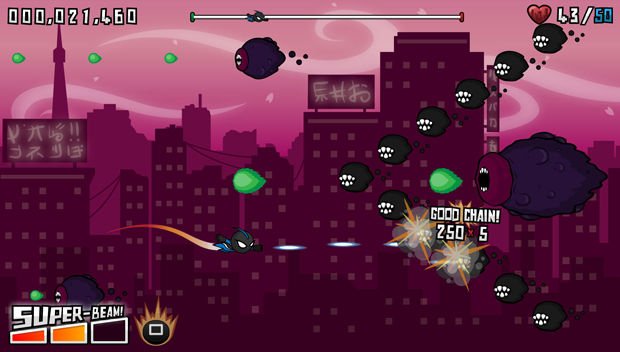 While the core gameplay revolves around shooting all the Ravagers, the black bigmouth enemies that swarm your screen, each level throws different types of larger enemies at you to distract you. These types of enemies take more hits to kill and either shoot at you to stun you, or fly into you for the same effect. However, they never try to get past you to damage your city’s health so you can ignore them if you want.

You can just keep blasting everything from the safety of the left side of the screen, or fly in and melee-kill Ravagers up close. But this is also a bit of a double-edged sword though as the attack animation slows you down and stops you from spraying bullets for a precious second. Sometimes the melee attack can be a handy last resort tool to grab that one Ravager that got past you. More often than not, it results in missing another Ravager by not shooting continuously.

If you do succeed in blasting everything on the screen consistently, the city’s population awards you by cheering you and by filling a special attack bar. As long as you don’t let any Ravager get past you, these special attacks grow in power as your bar grows. The first Turbo Fire power is useful enough, but keep on blasting and you’ll quickly get a thin Super Beam laser followed by a screen-raping Hyper Beam.

In a nutshell, the campaign runs you through 5 levels with 3 stages each and a boss at the end of the third stage. And although the boss fights make the third stage of each level last a bit longer, you can  blast through an entire level in about 20 minutes. Which raises the question: “WTF?! is really short on content?!”. Luckily, the answers is that nothing could be farther from the truth.

The campaign is not very long itself, but the story that plays out between levels is pretty damn funny. It’s not hilarious in a “Hahaha, this is too funny and blarg now I’m dead” manner, but it will raise a smile on your face unless you are just really jaded. For a shoot ’em up the story is well integrated as well, which is nice for a change. As Earth’s protector, you are defending yourself against allegations by the Galactic Council of planetary protectors who claim you let Earth be invaded. Not only that, but your showboating as Earth’s hero didn’t really help your case that you did nothing wrong. As you retell the game’s playable events, the game use elements from the overarching story as a tutorial mechanism. How did you defeat that giant monster? Well, I just shot it until I held R and pressed X rapidly, duh. 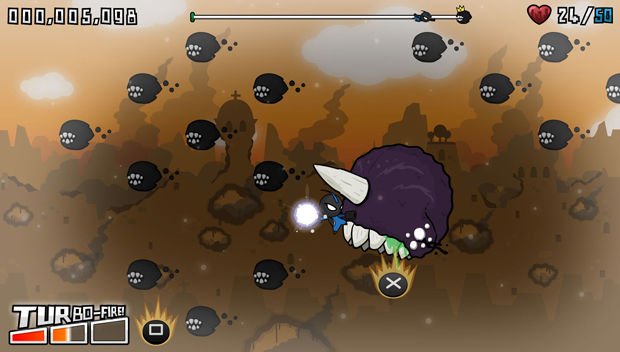 Other than just finishing the campaign, you can replay each stage for a higher highscore by getting bigger chains and keeping your city’s health intact. For a $6 game you can play on the PSP and which even looks great on a PS3 with a HDTV hooked up, the campaign alone wouldn’t even be a terrible deal because it’s a fun enough. But apparently that was not enough for Mediatonic.

The campaign is just a way to get you acquainted with all the different types of enemies and with the techniques of managing your special attacks bar. A Challenge mode gives you 24 short challenges to hone the skills you gained in the campaign. Whether you have to finish a stage on turbo speed, reach a set amount of points without missing a single Ravager or defeat a boss as fast as possible, this mode offers you couple of hours worth of extra content. It’s a fun mode that forces you to rethink the tools at your disposal, such as the melee attack.

The real meat of the game comes from the Infinite mode. This is where you survive for as long as possible to reach the highest highscore. You’ll have to apply all the skills you learned from the campaign and later honed in the Challenge mode. The standard highscores could have been a bit higher though, as it’s pretty easy to reach twice the highest preset highscore in the game. With 4 levels to choose from, this will keep you playing for a long time. That is, if you are the kind of player who goes for highscores. 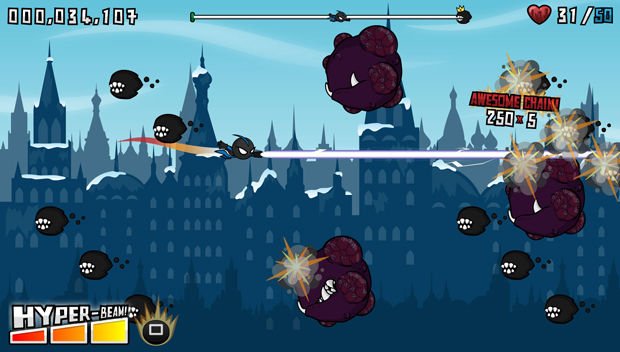 Who’s That Flying?! sports a distinct graphical style that looks a bit like The Behemoth’s, although that is unfair to Mediatonic if you look at their past games. The clear graphics definitely help to make it a pretty good looking game on a big screen if you want to play it on your TV. The soundtrack consists of a single theme that is styled to each city. It’s a nice approach to have consistency in a small game while having enough variety so it doesn’t become annoying.

Having said that, the Ravagers could perhaps have done with a bit more variety. Even though every level throws new bigger enemies at you, the main enemies always stay the same. You could argue that it does keep the Infinite and Challenge modes from getting too chaotic, but a different Ravager for every level’s setting wouldn’t have been the worst thing to add. The game is also not very hard; veteran shmup players will get silver medals easily enough. Still, getting gold medals in very mode and on every level will definitely not be a first try affair.

Overall, Who’s That Flying?! is a charming, fun and cheap 2D shoot ’em up with a lot of personality and plenty of bang for your buck. If you never bothered with the PSP Minis before, then Who’s That Flying?! could just be the most compelling argument to date for giving it a closer look.