Warriors Orochi 3 is Tecmo Koei’s Super Smash Bros. Considering Nintendo’s pedigree as compared to Tecmo Koei’s, that statement can be seen as quite laughable, but nevertheless, Warriors Orochi 3 dabbles in the kind of crossover content usually reserved for the most prestigious companies in this industry.

Regardless, Warriors Orochi 3 asks no forgiveness for the self-congratulatory way in which it shovels cameo appearances and fan service into the player’s face. For fans of the company, however, forgiveness isn’t necessary.

The intellectual property of Tecmo and Koei’s history may not deserve the hack-n’-slash equivalent of Super Smash Bros., but I’m glad it exists. 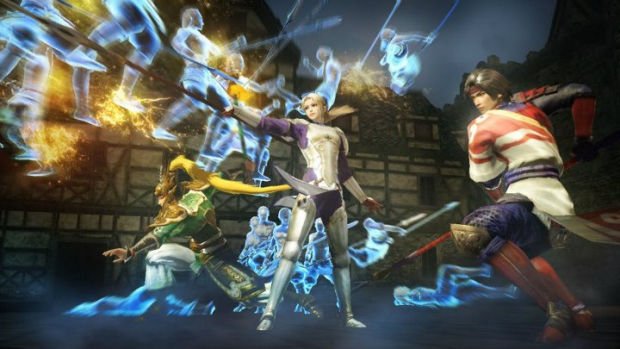 Warriors Orochi 3 unravels in the years following the events of the previous games, in which characters from both Dynasty Warriors and Samurai Warriors were forced into an anachronistic universe on the whim of a violent demon, Orochi. The fractured timeline has begun to settle into a new world when suddenly a gigantic hydra appears out of nowhere and begins systematically killing everything.

By the time the game begins, there are only three generals left alive. At the culmination of a climactic battle, they too are about to face oblivion, only to be rescued at the last minute by a brand-new character, the mystic Kaguya. For reasons unexplained, she has the power to travel through time, and tasks the surviving warriors with the quest of reliving the past in order to rescue everybody who was killed.

While it’s full of silly dialog and the usual stock characters, it’s interesting to note that Warriors Orochi 3 sincerely attempts to tell its own original, engaging story this time around. As characters are introduced with their own goals and plots, I’m pleased to say that Omega Force put some real effort into the writing, rather than simply having characters shout “Justice” and “Chaos” at each other for several hours (though there’s plenty of that, too). It’s not an award-winning narrative that will change lives, but the story is quite unique and fun this time around, which deserves a pat on the head.

The plot informs the structure of the gameplay, which is a little less linear than usual. Each chapter of the game contains various battles, some that move the main narrative along and others that feature side-stories. During main missions, players may witness the deaths of allied characters, and be unable to recruit them as playable heroes. However, side missions offer an opportunity to fight a battle that took place before the character died, allowing you to alter future events. Once the side mission has been completed, players are offered a “Redux” version of the story battle, in which they can meet new objectives and save the character’s life, thereby unlocking them as a playable character.

Between fights, players can wander around a hub world, throwing parties to increase the friendship levels between characters, talking to significantly bonded heroes to unlock missions, and chatting with a blacksmith to buy and fuse new weaponry. Weapon fusion merges the special attributes of two armaments to create a more powerful one. Such attributes include special elemental damage, increased attack power against certain foes, increased probability of finding items in the field, and all manner of other helpful properties. Buying and merging weapons requires gems, earned during battle.

Battles consist of your expected hack-n’-slash madness, a formula that I still find enjoyable in its cathartic simplicity. As always, players go up against an army of opponents, complete objectives, and slaughter everything in the way. As is typical with the Orochi series, players control three warriors and swap them at whim, which helps change up the battlefield and survive tough encounters, an increasingly useful trait on the Hard and Chaos difficulties. 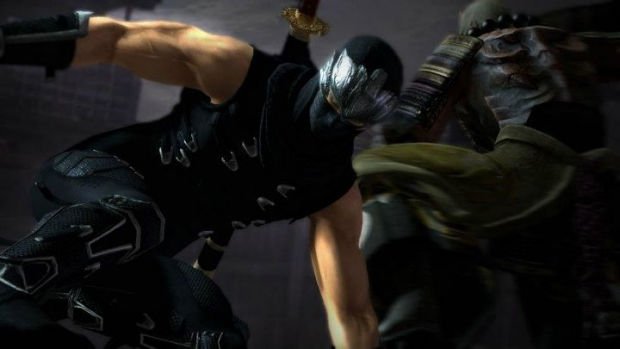 Fans will have a tough time picking their final three heroes, however, as Warriors Orochi 3 boasts the most playable characters of any Warriors game to date. There are over 120 to choose from, most of which feature their own play style and weaponry. Even many of the “clone” characters from DW7 use downloadable content, Xtreme Legends weapons, or classic movesets to break up any monotony.

Characters are not just split between Dynasty Warriors and Samurai Warriors, but now include Ryu Hayabusa from Ninja Gaiden, Ayane from Dead or Alive, Joan of Arc from Bladestorm, Nemea from Zill O’ll, and Achilles from Warriors of Troy. In addition, Omega Force has designed a number of original characters based on Eastern folklore, such as the Tron-like Ne Zha and the demonic Shuten-doji, who drinks and spits various liquids to deal damage. Each of the crossover games gets a brand-new stage featured around them, for added fan service.

The main game is packed with a ludicrous amount of familiar and fresh content, and the single-player meat has been bolstered with online co-op. Sadly, Warriors Orochi 3 insists on using the same terrible matchmaking system found in Dynasty Warriors 7, where players have to put out a call for help and hope somebody is looking for a match at the time. To date, I am yet to find an online game running, but the opportunity is there if players get lucky. 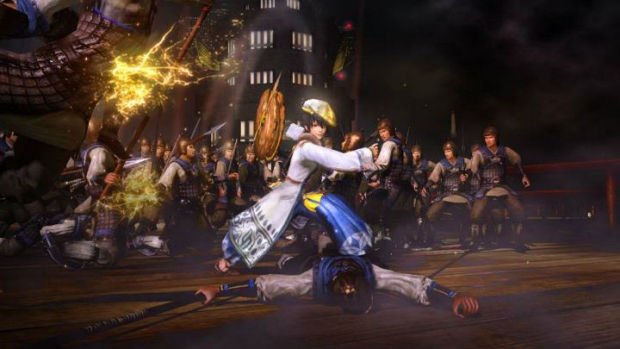 Omega Force is dabbling in user-generated content with this game, featuring a new “Musou Battlefield” mode in which players can create and share their own stages. It’s not the most complex feature in the world, but it’s a fun little distraction that can keep gameplay feeling fresh. Ostensibly, you get to pick a battle from the single-player mode and change who fights in it, what type of regular soldiers are encountered, and what lines of dialog are spoken. Players are invited to upload their creations, which can be downloaded and fully reviewed by other users.

Intriguingly, Warriors Orochi 3 completely omits an English voice-over option, with only the original Japanese utilized for all dialog. For many, this will be seen as an overwhelming positive, as the English dub isn’t universally popular. Still, relying on text to catch objectives and narrative is pretty tricky when one’s trying to concentrate on playing the game, and I find that I tend to miss a lot of what’s going on during a particularly hectic battle. I suppose one can’t fault the spirited screaming that the original actors deliver, and many fans are going to enjoy the more authentic dub regardless. 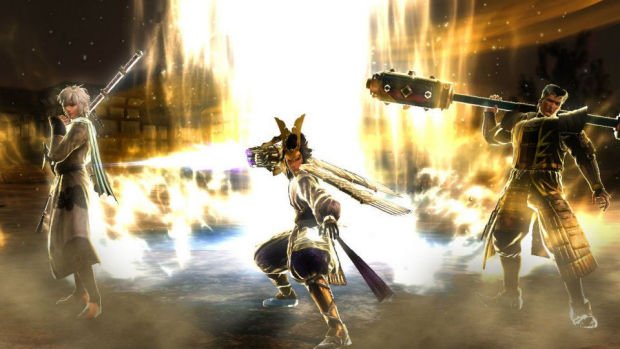 Warriors Orochi 3 is quite possibly my favorite Warriors game of the series. It’s stuffed to the gills with content, featuring enough characters, stages, and unlockables to keep the hardcore fan enthralled for months. It boasts a huge soundtrack featuring original and classic tunes, crossover shamelessness that’s sure to raise a smile, and bonus features that haven’t been seen in the series before. All that, and it’s just damn awesome to see Ryu kicking ass in medieval China, or Oda Nobunaga doing his thing on a beach littered with colorful umbrellas and balloons.

While there’s plenty of new stuff, it won’t be enough to win the hearts of the series’ many vocal detractors. However, fans should not hesitate to pick this entry up, and those looking for a ridiculous amount of mindless hacking action will find a treasure trove of violence in this massive offering.

This is the ultimate Warriors game, no question about it.