THQ is starting a habit of paving the way for retail releases with digital spin-offs. We had Red Faction: Battlegrounds release on XBLA ahead of Red Faction: Armageddon, and now Warhammer 40,000: Kill Team has appeared to promote Space Marine‘s release later this year.

Such titles run the risk of being disposable, cheap cash-ins that exist as little more than interactive advertisements. In fact, most of them end up as exactly that. Whether or not Kill Team falls into that category depends on your perspective. 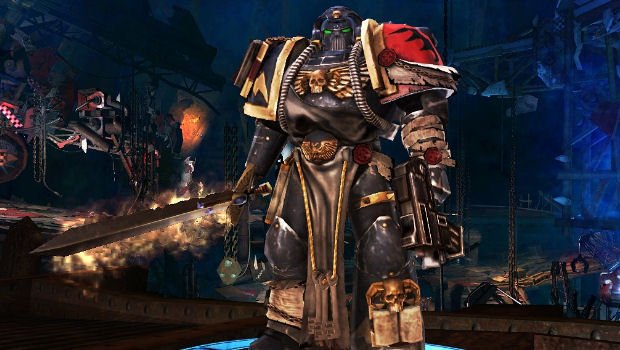 Warhammer 40,000: Kill Team is a co-op arcade shooter in which two players face off against hordes of Orks from an isometric perspective. There are four character classes to choose from — the melee-centric Vanguard Veteran, the ranged Sterngard Veteran, the balanced Librarian, and the turret-planting TechMarine — each with their own set of strengths, weaknesses and unique special abilities.

As the game progresses, players can unlock “Perks” that add extra health, damage, or special ability enhancements, as well as class-based weapons that deal more damage. The unlocks are welcome, but they’re incredibly straightforward, and the points-based unlock requirements will see you finding all weapons and perks fairly quickly.

Kill Team is, above all, an incredibly simple affair, but that’s not to say it’s bad. The game’s sole intention is to drop players into various levels and throw waves of enemies at them, all of which need to be dispatched with stick-based firepower or button-mashing melee attacks. In this regard, it is a success. You can’t go too wrong with such a simple idea, and by sticking to a well-worn path, Kill Team provides a satisfying experience. There’s just one catch — it’s only really satisfying when played cooperatively. 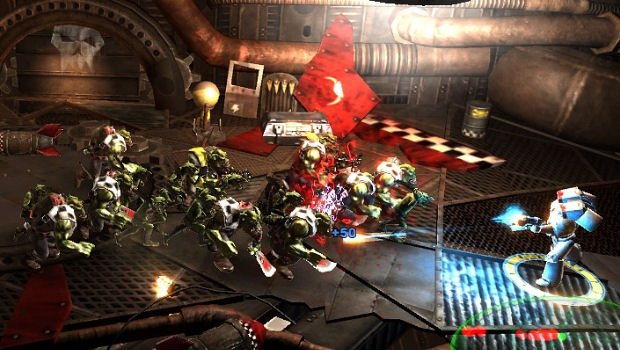 As a single-player game, Kill Team feels weak and dull. It clearly hasn’t been balanced for solo play, and as such, it isn’t very fun when going alone. In single-player, all enemies will train their projectiles on one target, a target that cannot dodge and that moves so slowly (even while “sprinting”) that most attacks will hit their mark. It’s not really a hard game so much as it is just annoying. Co-op provides balance by evening out the damage and allowing players to revive each other, making for a far more enjoyable game.

When played in co-op, there is quite a bit of fun to be had, but unfortunately, you will need to find a real-life friend. For some unknown reason, there isn’t any online functionality aside from leaderboards, so you can’t hook up with a friend via Xbox Live. The lack of online play really kills a lot of the game’s potential, as it relies so heavily on the co-op experience yet deliberately makes it harder to access.

The sad knock-on effect is that Kill Team feels more halfhearted than it actually is. At its core, the game is a solid and fun shooter that is of surprisingly high quality for something that uses unlockable content in Warhammer 40,000: Space Marine as its biggest selling point. The fact that it cannot have its co-op capabilities exploited to the fullest, however, severely damages its potential. 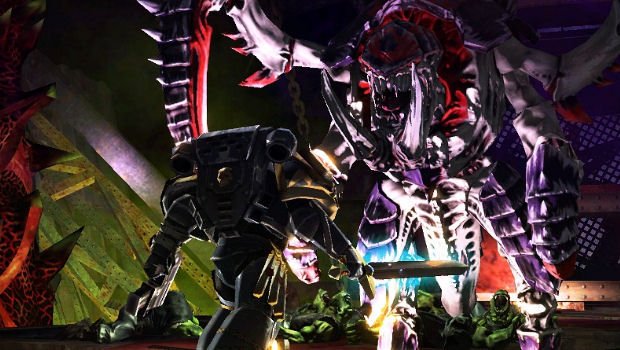 I was fortunate enough to play most of the game with my stepson, but those not so fortunate need to have a friend who is a gamer, a fan of arcade shooters, and has a desire to play Kill Team above something else more exciting. That’s a list of requirements so specific, only a handful of gamers could meet them.

Warhammer 40,000: Kill Team is a decent little shooter for fans of the franchise, but it’s really not fun when played on its own, and the lack of online is a glaring limitation that’s difficult to discount. THQ needed to either make the game exciting enough for solo players or include an online option. The fact it did neither means that what could have been a really good game has ended up as a decent but blatantly lacking shooter.

It’s a shame that Kill Team does not disprove the preconception that it is a cheap cash-in existing solely to promote Space Marine. It easily could have been more than that.