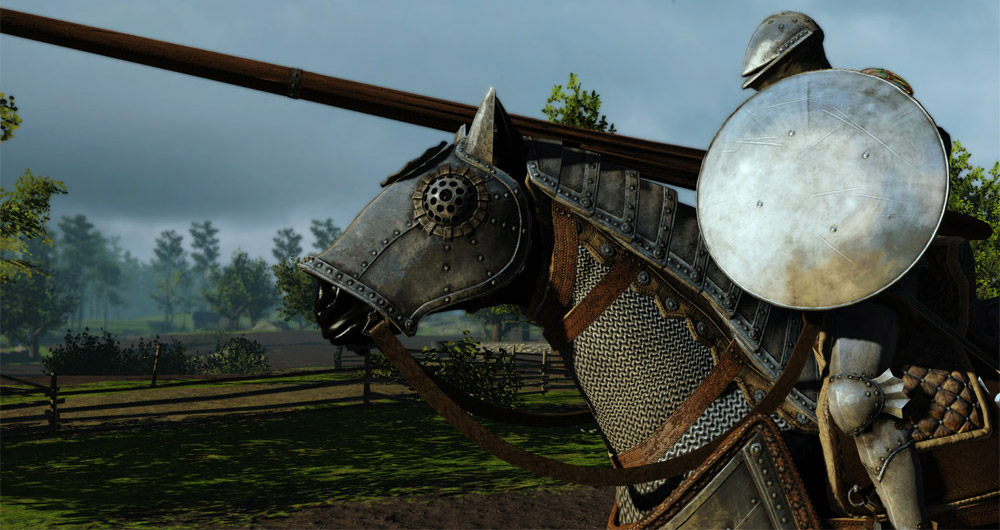 The War of the Roses was a big old 15th Century dynastic squabble between two Plantagenet houses, York and Lancaster, for the throne of England. It ended in a Lancastrian victory, the reconciliation of the two houses, and the creation of House Tudor. Most importantly, it involved a lot of battles filled with armored chaps beating the living daylights out of each other.

Fatshark’s War of the Roses is all about those fellows, and their bloody clashes. Up to 64 players duke it out amid the pastoral setting of England’s verdant countryside, ripped apart by brutal conflict.  It can be a fast-paced slaughterfest one minute, and a methodical, tactical, squad-based multiplayer experience the next.

It’s ambitious, but sometimes underwhelming, and I must have changed my mind about it a plethora of times before I set about writing this. 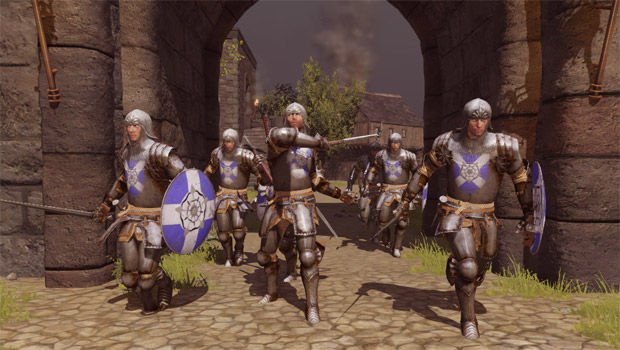 I’ve never been a fan of bows. Despite knowing better, I often find myself romanticizing combat before the widespread use of gunpowder, and there’s nothing that shatters this illusion quicker than getting an arrow through the eye from an enemy I didn’t even see. Thus, I knew from the outset that I was going to be picking a melee class for most of my scraps in War of Roses.

Initially, players can select a class from four premade builds with set weapons, armor, and perks. There’s the Footman, the Longbowman, the Crossbowman, and the Footknight; thankfully, they are all perfectly serviceable. Melee combat should be familiar to players of the Mount and Blade series. How you move your mouse, essentially your weapon, as you charge your attack denotes what type of strike you make. Moving the mouse down turns it into a stab, to either side makes it a slash, and moving it up charges a powerful overhead attack.

Knowing which type of attack to employ requires keeping a close eye on a foe’s movement, as well as what type of armor they are wearing. Steel-clad knights can brush off the slash of a dagger, but some quick stabs might be able to find a weakness somewhere the plates don’t cover, and then they die like any other solider. It’s a very satisfying combat system, rewarding skill and timing over high level or expensive gear. Of course, it can often just degrade into and orgy of flailing swords and maniacs running around like headless chickens. Duels are a different matter entirely, though.

Death can come swiftly, so duels are often tense stalemates with both players blocking and circling each other, occasionally risking an attack before falling back. There’s nothing more terrifying than being in such a duel, only for you to be knocked back slightly, with an arrow piercing your armor. Then you’re defending from both an attacker you can see, and one that could be hidden anywhere. Sometimes you just need to run.

Scratch that. Clearly it’s being in a duel underneath a capture point, your foe bleeding badly and close to death, when a whole bloody army spills into the area — cavalry, archers, footsoldiers, the whole caboose — and moving almost as one they march towards you, weapons at the ready. That’s the most terrifying thing.

As I said, I’ve changed my mind a lot. 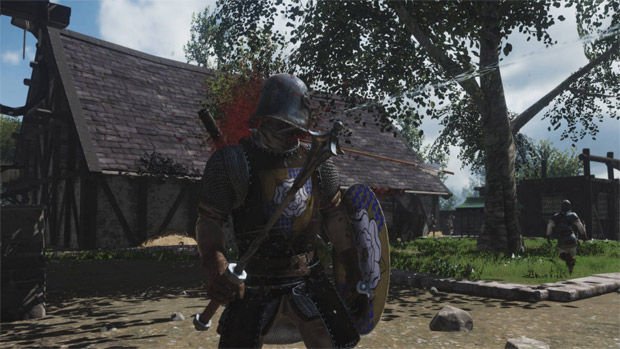 Bravery is not one of my strengths, and I’m not what one would call a lone wolf. Not that I like people, but I do like meat shields. It’s a good thing, then, that I could attach myself to squads. In a squad, you can get buffs, respawn by your team instead of your base, and it encourages players to work together and be more mindful of team tactics.

Since I’m all about diligence, I eventually decided to take the premade archer class for a spin. I did not expect to enjoy it. I thought the tension of battle would vanish and that being distanced from the clashes would make me grow bored of the game. I’ve never been so wrong.

When you play as an archer, you might as well be playing a different game. Fatshark has done an admirable job creating a vast number of spots perfect for sniping, sneaking about in cover, and keeping out of the fray while raining death from above. Initially, I spent as much time exploring the maps and hunting down perches as I did actually killing. I was constantly on the move, reassessing the battles, looking for better angles, trying to figure out the erratic patterns of my targets’ movements.

When an arrow flies true, it often results in an instant kill. No slowly bleeding to death, no hope of being brought back by allies — it’s goodnight and back to the spawn point. To balance this out, archers can run out of arrows, though the amount in the quiver recharges over time. You can only keep the string drawn for a short time, as well, and eventually the archer’s strength will fail and he’ll have to put it down. The crossbow has similar limitations, notably the slow reload time and the fact that it requires a bit of player involvement beyond hitting a reload button. 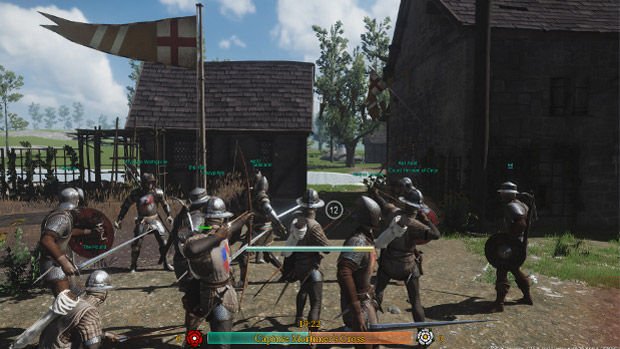 These weaknesses can be diminished by certain perks, like almost everything in War of the Roses. The depth of customization is quite impressive, allowing for changes from the minuscule to the massive. After getting coin and experience from kills, objectives, executions, healing, and a bunch of other things, players can quickly afford the first custom class slot. It takes a bit of time before you can cobble together anything with the full loadout of perks that the premade classes have, so custom classes are at a big disadvantage early on. It’s easier to slowly build the class over time, spending coin gained from matches using the starter classes.

The breadth of the options is a little daunting, but most items and upgrades are unlocked at much higher levels, or cost a significant amount of coin. The initial choices are much simpler, yet are still large in number. Perks allow you to use certain weapons and armor, can make you quicker, stronger, better at capturing objectives, all manner of things — these form the basis for your class.

That’s just the tip of the giant iceberg, however. Once you start selecting equipment, it’s not merely a matter of selecting a sword, or a shiny helm. You’ve got to choose what type of hilt you want, what type of metal it’s made of, the fighting style you want to employ when using that specific weapon, or if you want to have a great big ridiculous eagle on your helm. Every base weapon or piece of armor — of which there are many — can be customized in this way. Some of them are just aesthetic, but the vast majority of them affect endurance, damage and defense, and so on.

Whenever I finish a battle, I rush back to my profile to see if I can unlock any new perks or gear, absurdly giddy with anticipation. Eventually, you can unlock more slots and create more custom builds, though there are not that many. This doesn’t create too much of a problem, however, as you can just purchase more things for an existing build and swap them out as you see fit. 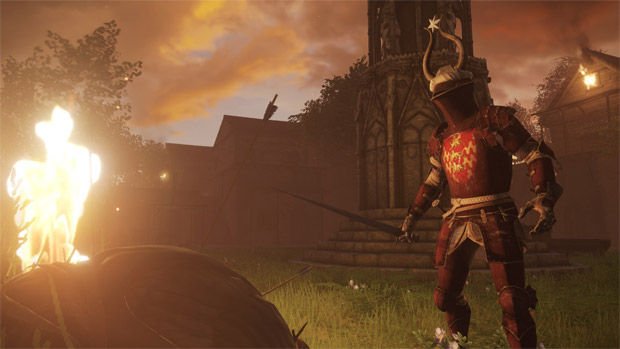 The abundance of content on the class creation side of things just makes the dearth of game modes all the more ridiculous. Team Deathmatch and Conquest, that’s all you get — what variety! Not only are they few in number, they are horribly uninspired. Conquest is objective-based, but the only objective is capture-and-hold areas. Flavor is provided by the gorgeous, often complex maps; though there aren’t many of them. There are no surprises to be found in Team Deathmatch, either — it’s as bog standard as it gets.

There is no single-player campaign, so providing two multiplayer modes and seven maps is simply bad form. Fatshark is promising more modes, which I’m sure it will deliver, and I’m certainly excited about getting stuck into. Unfortunately, one cannot judge a game on promises, and right now it’s severely lacking important content.

This is undoubtedly one of the main reasons I have changed my mind about War of the Roses so often. The battles are fantastic; whether you are on horseback, tearing across a bridge, knocking a squad of enemy archers left and right, into the water and under hoof, or you are silently stalking a lone warrior, leaping from roof to roof, looking for the perfect spot and the best escape route. Familiarity breeds contempt, sadly, and after doing these things in the same places, while trying to achieve the same objectives over and over again in such a short space of time, it starts to get a little dull. Yet the moment I started to think I was getting tired of it, I’d get into a horrifyingly close duel that felt like it went on for an eternity, or I’d be behind enemy lines and on the run from a squad of angry foes, or worst of all: be playing chicken with a dude on a horse.

So it’s diverse but sparse, chaotic but tactical, a game about being close enough to your dying enemy to spit on them, and far enough away that they can’t even see you. Quite the dichotomy. It’s also temperamental; it likes to crash at the worst possible moments, or make people fall through the ground and out of existence. Despite its flaws, despite how long it took for me to form a cohesive opinion about it, I know one thing for sure: It’s still pretty great. Right now, it’s a lot of fun, and while lacking in some key areas, it also has the potential to grow into something that will keep players slaughtering each other for a long time to come. It’s competitive, skill-based, I suck at it, and I know I’ll be playing it tonight.