Carve up the world

To call Victoria II dense would be a gross understatement. It’s a pound cake, with each ingredient — the tangled politics, vast wars, and simulated economies — adding greater depth and increasingly complex, interweaving systems. Even for those who consider themselves to be an experienced Europa Universalis player, as I do, it can be a daunting grand strategy title.

The second expansion, Heart of Darkness, overhauls some of these systems, like the naval combat and colonization, while mixing in new elements to make Victoria II the best it’s ever been. National newspapers give international events more character in an easier-to-digest fashion, while the Crisis System makes the way powers interact more convincing and tense, also offering more gameplay options to smaller countries.

Underneath the — sometimes confusing — menus and colorful historical flavor is a monster of a strategy game, and one which will cause you to come back to the real world ten hours later, wondering how you managed to waste an entire day colonizing, fighting, and trying to please the eternally rowdy masses of your chosen nation. 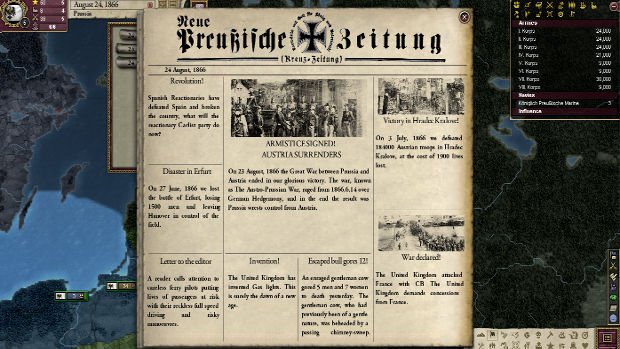 Joseph Conrad’s Heart of Darkness explored the racism and exploitation that made the European colonization of the African continent possible, revealing the depravity of the Imperial powers’ rape of the “Dark Continent.” Victoria II neither condemns or glorifies such things, however, and instead puts players in the guise of the politicians and leaders who carved up the world, not just Africa, during the 19th Century.

Slavery, wars of conquest, and exploitation of a land’s people and resources are all present, but they are all placed in their historical context, where the powers of the age saw many of these things as completely acceptable.

Individuals and groups living in these “civilized” nations do have opinions, though, and they voice them through the democratic process, or, when that doesn’t work — or simply doesn’t exist — they may rise up against their leaders.

My Prussian and, years later, German conquest of that distant continent met with many obstacles, but none greater than the views of my people. The more educated and liberal they became, affected by both random events and the changes I made to the superpower, the more they called for me to shrink the military, give more people rights, and temper my bloodlust with thoughts on how it would impact my population. 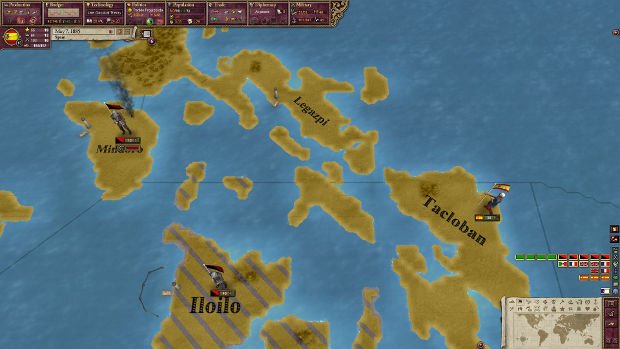 None of Heart of Darkness‘ systems exist in isolation, and every decision I made had a knock-on effect, from taxation to warfare. Like all of Paradox Development Studio’s games it plays out in real time, but I spent most of my time with the game paused, agonizing over even the smallest of moves.

Most of the new mechanical additions appear later in the game. As the world becomes smaller, the race to colonize Africa begins in earnest, and back at home, conflicts and crises arise that draw nations big and small into international incidents. For those wishing to experience the bulk of the new content immediately, it’s better to pick a later start, or a nation — such as Greece — that becomes embroiled in international crises from the outset.

The one new feature that is present right at the start is likely the most noticeable one, however, as it crops up continually throughout the game. Boiled down, the Newspaper System acts as a collection of notifications, detailing events and national sentiments. New inventions, international disputes, rising tensions, and the concerns of people both at home and abroad can be read about, and while much of the information can be discovered elsewhere, the newspapers are a welcome shift from numbers and text with no personality.

Unfortunately, familiarity breeds contempt. After a few years of reading these newspapers, their character loses its luster through repetition, and reading simpler, colder notifications just seems more efficient when one is attempting to manage an entire empire. 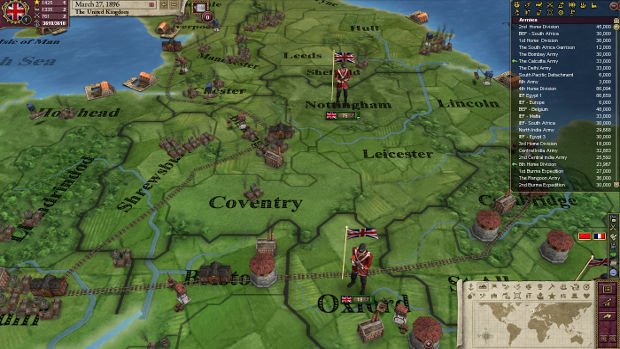 The overhaul of navies and colonization are both closely related, and extremely welcome. Naval bases and ships can no longer be spammed, with the former only able to be constructed once per state, and the latter requiring a particular level of naval base depending on the ship type.

How many ships you can maintain is determined by your supply level, which is connected to how many naval bases you’ve constructed (and how much you’re spending on stockpiles). More thought and planning is required when building up a fleet, and it also gives players interesting avenues for attacks on enemies, as new ways to cripple a foe open up.

Ship-to-ship combat has also seem some alterations, primarily in the form of new abilities and values. Some vessels, for instance, have an evasion value, causing more shots fired to miss them, while others have increased gun range, allowing them to begin firing before the opposing ship can get within range. Though these fights are still pretty much hands-off affairs, the level of strategy involved in constructing a devastating fleet has been greatly increased.

Naval bases and fleets also have an impact on colonial aspirations, as it’s all well and good to want to bugger off to a new country and mess it up, but one cannot do so on a raft. Naval technology, along with bases and ships, add to a nation’s Colonial Points, which in turn are spent on establishing protectorates (and later colonies) abroad.

In the vanilla game, colonization needed specific technologies to be unlocked, but in Heart of Darkness it’s the inventions created out of earlier techs that makes it possible to gain a foothold abroad, while later advances merely augment this. It’s much harder to have a colonial monopoly, as any sufficiently up to date power will be in a position to send expedition forces. And it is that spirit of competition that makes the colonial aspect of Heart of Darkness so compelling. 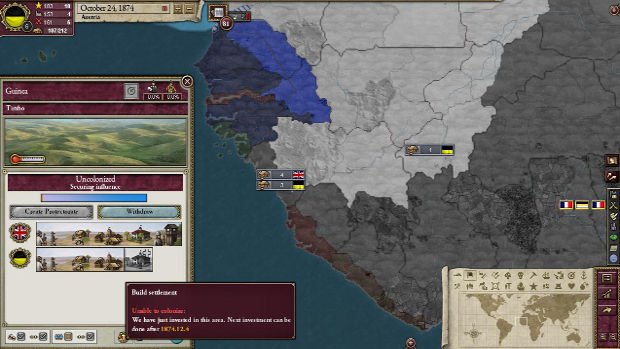 Having the appropriate Colonial Points might be good enough if no other nations are gunning for that particular region, but if they are, it becomes a race to see who can throw enough points at the venture. Investments skyrocket as powers compete with each other to build outposts and fill them with troops until they simply run out of points. If it all gets a bit much, however, there’s an option to pull out, and the Colonial Points are, conveniently, returned.

Where it gets really interesting is when it’s just two nations competing over the same piece of land. In such cases, the scenario becomes a Flashpoint, and the longer it goes on, the more tension rises. If the dispute doesn’t get settled, then the whole thing could spiral into a war.

The Crisis System and Flashpoints make up one of the largest of the expansion’s features, and deftly recreate the tense powder keg that was international relations during this period. Flashpoints are locations where one power controls a core province of another, and when tensions rise — either due to events or the machinations of players and AI — it can become an international crisis.

When this occurs, smaller powers (if they are involved) can seek aid from one of the superpowers, like France or the UK, who can back their claim. If nobody backs a side, the crisis amounts to nothing, but if there is some support, it becomes a full-blown crisis. At this point, nations can attempt to solve the dispute through bribery and concessions, because they are sneaky bastards, but if temperatures continue to rise, then the incident could explode into all-out warfare.

One such crisis almost crippled my fledgling German Empire when I was brought into a crisis — at the request of Bohemia — to support them against my hated foe, Austria. Despite my attempts to find a diplomatic solution, I was foiled at every turn, and it inevitably turned into a war. A world war. 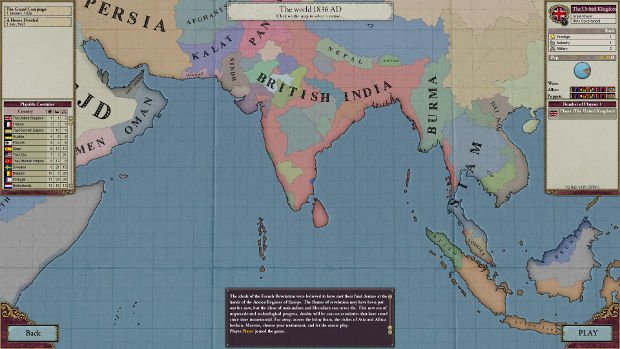 On one side was Germany, UK, Sweden, and Denmark, and on the other was France, Russia, The Ottoman Empire, and Austria. This simple dispute over one small piece of land had erupted into a war that not only spanned Europe, but the entire globe, with battles taking place in China and Africa as well. Smaller satellite nations were brought into the chaos, as well, and the death toll was astronomical.

When it finally ended, years later, nobody could claim to be the victor. Indeed, Austria had suffered so much that five years later it still hadn’t recovered and was torn apart by my German armies looking for revenge. This is how wars began in the 19th Century, over comparatively small things, made larger by competitiveness, posturing, and old vendettas.

Heart of Darkness still contains many of the issues that hampered the core game, with the frequency of rebellions making the late game frustrating, as populations become extremely liberal and demanding, and the tutorials are still insufficient when it comes to explaining the game beyond the most basic principles.

Unlike Crusader Kings II, it’s not a title one can simply jump into an experiment with, as mistakes can have a lasting impact and seriously hamper a nation’s development, and a crippled nation is just not fun to play. It demands that players obsessively explore menus and do a vast amount of reading before they take the game off pause, and that’s likely asking too much from some people.

Put in the work, however, and Heart of Darkness will reward you for the effort. It’s still huge and uncompromising, but there’s no better way to experience Victoria II. The improved combat and naval mechanics were oft-requested, and Paradox followed through, while the new features make the studio’s vision of Victorian war, politics, and economics all the more believable and grand.