With the release of Overwatch in 2016, the multiplayer shooter market was turned upside down.

Going from a period where everything had a bunch of faceless military drones to a game with a cast of eccentric characters with distinct personalities, nothing has been the same since. Now games need to have in-your-face attitude and libraries full of lore to maintain interest for extended periods of time. While Blizzard was able to maintain a solid balance between character updates, storytelling, and gameplay, a lot of developers have failed to replicate the winning formula of Overwatch.

Seemingly taking inspiration from Blizzard’s monster hit, Vicious Circle is a multiplayer shooter with an eccentric cast of characters all fighting against each other for dominance. While the basic gameplay is pretty far removed from what Overwatch does, it’s not hard to see where Rooster Teeth has taken cues from. This is a game that screams “trend-chasing,” what with having character skins, unlockable win quotes, a battle pass, and a content roadmap all ready for launch.

Despite featuring a somewhat unique loop, Vicious Circle is just not quite there yet. 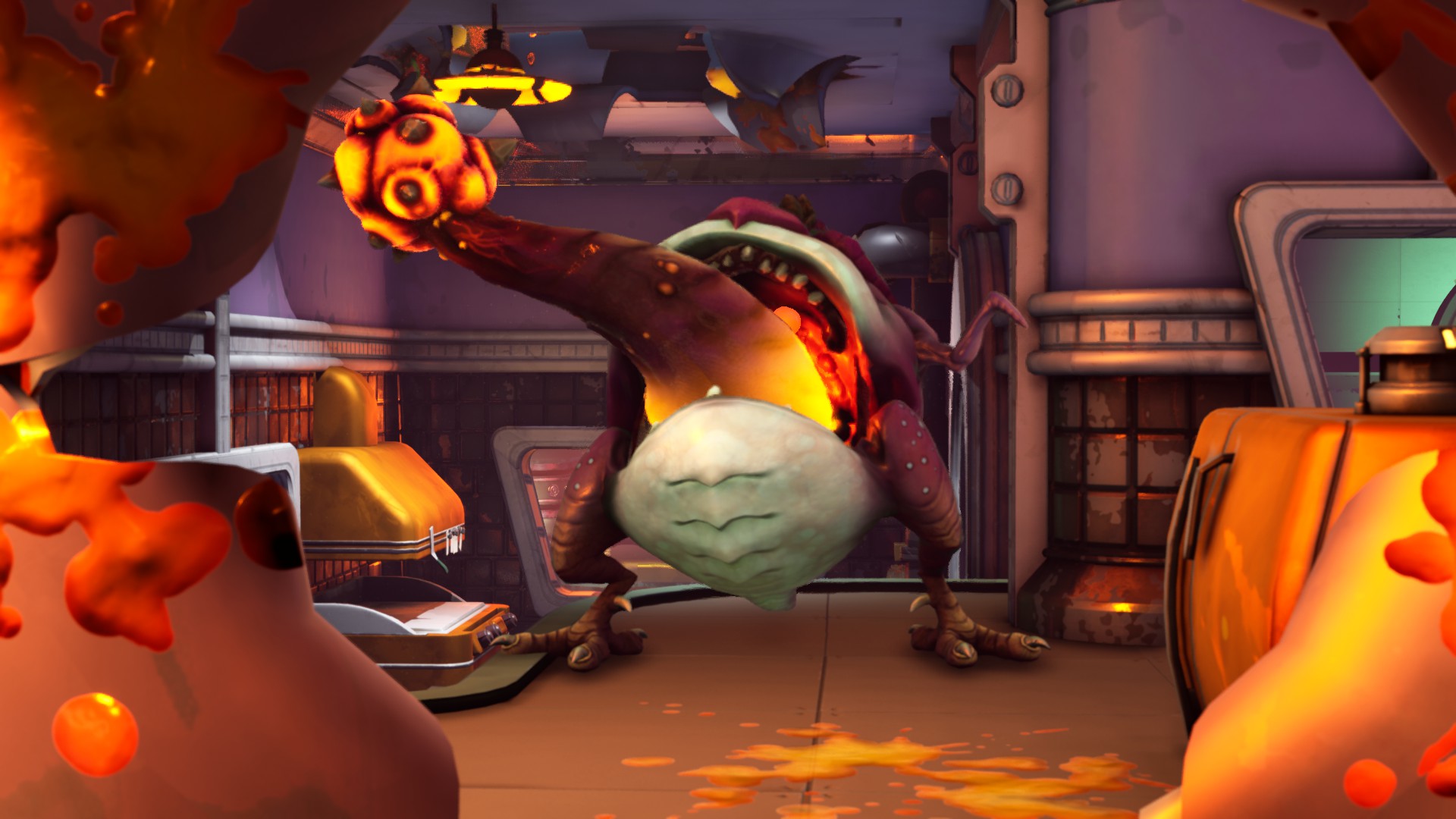 Labeled an “uncooperative shooter,” Vicious Circle is all about screwing over your friends to steal victory away at the last second. The premise for each match is that you’re out in space somewhere collecting nuggets to return home and become rich. A gigantic chicken called “Peggy Sue” and her alien minions are trying to stop you from accomplishing that task. Since only one player per round can be teleported back, it’s up to you to either help your comrades fend off Peggy Sue, or stab them in the back to snatch victory away. Rinse and repeat ad infinitum.

It’s a decent enough premise for a game and something that sounds like it would be a blast with friends. It helps that the characters you select from each have distinct abilities and personalities, making for slightly different playstyles during a round. It’s just that after you become acclimated to how Vicious Circle works, you start to realize that there is basically no substance here.

I wouldn’t call anything about this game cooperative, because it never behooves you to coordinate with your “teammates.” Since only a single person can win each round, it’s better to set off on your own and collect nuggets for yourself instead of dealing with others. The secondary items you grab even allow you to steal nuggets from other players, further putting emphasis on the fact that cooperative play is pointless. I get that there’s supposed to be a greater threat in the form of this giant chicken, but some serious balance issues get in the way of what should be a game where players put aside their self-interest to help each other.

Let me wind back a little, though, and explain how you play Vicious Circle. Each round begins with players selecting their character from a cast of four. These characters all have unique weapons, movement speeds, and special abilities. Captain Boom, for example, comes equipped with an automatic rifle and a temporary invulnerability shield. Zella, the mysterious alien, shoots magic orbs and can go invisible for a short period of time. Each character is meant to represent a different dynamic that compares and contrasts against each other.

In addition to your main weapons, you can pick up secondary items scattered around the levels. These take the form of holographic decoys, stun grenades, and audio mines. Hitting another player with these will see them dropping nuggets while tagging Peggy Sue will slow her down. It’s all par for the course but something has gone seriously wrong with balancing everything out.

On launch, Peggy Sue was just wildly overpowered. Having a one-hit kill charge attack with no audile start-up, barely any cooldown, and a tremendous health pool, her original incarnation was infuriating to be on the receiving end of. While I know it was supposed to push players together to topple her, it was rare you’d see rounds that didn’t end with Peggy Sue just obliterating everyone within a minute. 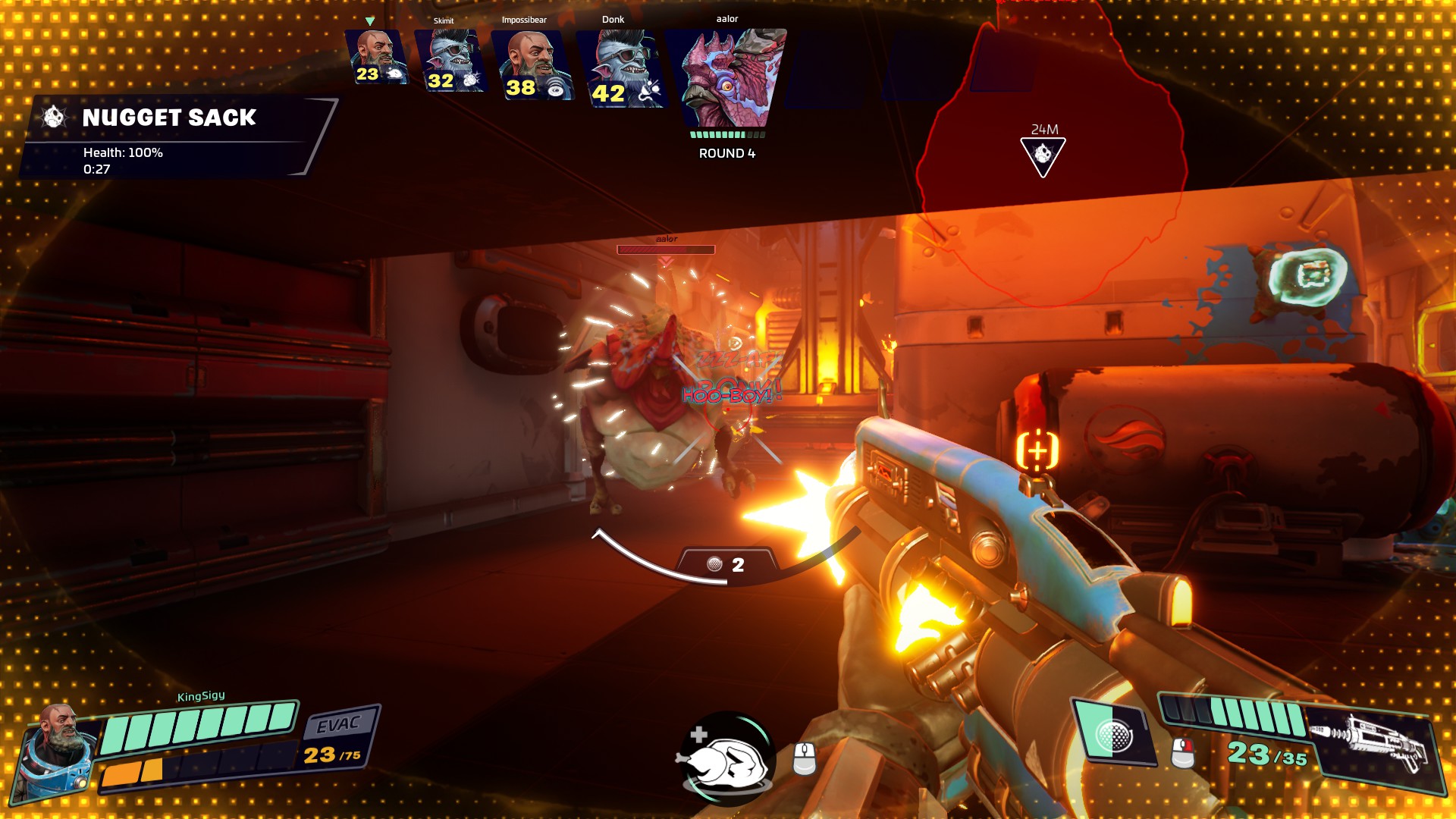 After a balance patch, Peggy lost some of her edge, but then robot character Cr45h & Burn became worthless. The only character with a special ability that doesn’t grant him invincibility frames, his slow speed and limited range make him nearly pointless in any given situation. He doesn’t fire fast enough to deal enough damage to Peggy, his movement speed is too slow to outrun other players to nuggets, and he’s not even well equipped to deal with the “Dippers” that players turn into.

You’re not completely out of the round when Peggy Sue kills you. When death comes knocking, you’ll transform into a small alien known as a Dipper and be tasked with inhabiting the body of a remaining player. With Peggy hunting them down, you basically just need to wait until someone gets distracted and pounce on them. You can even die early, let everyone else collect enough nuggets to extract, and then swoop in and steal the round. The Dippers are assholes, is what I’m saying.

Sadly, what I described is basically what everyone does. Since Dippers have next to no health, there’s not a lot of point to seeking out players if multiple opponents are still alive. Your best chance at victory is to be a colossal dick and swipe it at the last second. Once you become a Dipper, all hints of cooperation disappear since you cannot work together with your “teammates.” It’s every man for themselves. 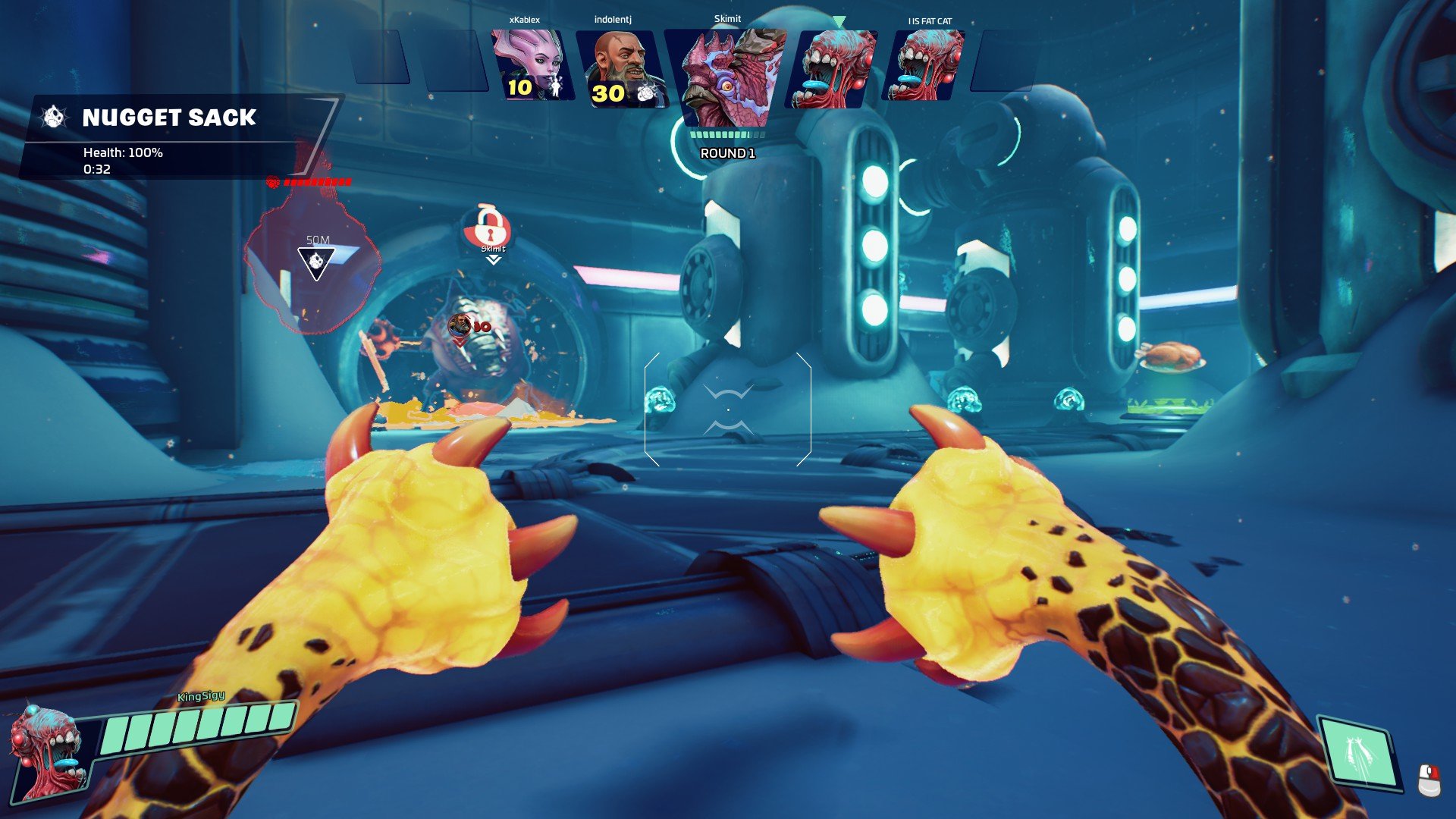 So with some of the characters feeling underdeveloped and strategies devolving to the same tactic, is there anything to like about Vicious Circle? For a budget title, this is surprisingly polished. The graphical presentation is comparable to Triple-A games and the voice acting is damn good. Each character sounds distinct and the announcer is pretty funny. He often cracks jokes about your friends dying and will comment about how absurd everything in the world is. Those Rooster Teeth personalities have definitely embedded charm into this game.

I’m also surprised at how much world-building there is here. For something with basically no story, Vicious Circle feels like a lived-in world. Random events will crop up during rounds to give you more nuggets and there are things like “Void Eyes” popping in from other dimensions. It’s intriguing to try and parse together where they might be from and what purpose they serve. Even some of your secondary items have jingles that mock established brands, grounding you in this weird sci-fi opera.

It’s just that there’s so little content here that it becomes hard to remain invested. With only four characters and four maps, you’ll see everything on offer within a few hours of starting. It doesn’t help that the progression system for leveling up is straight out of Fortnite, so there’s no concrete goal you can work towards. You just have to do random tasks enough times until an XP bar fills up and doles out a random unlock. The main menu even has an option for an in-game store, though that still isn’t active as of this review. 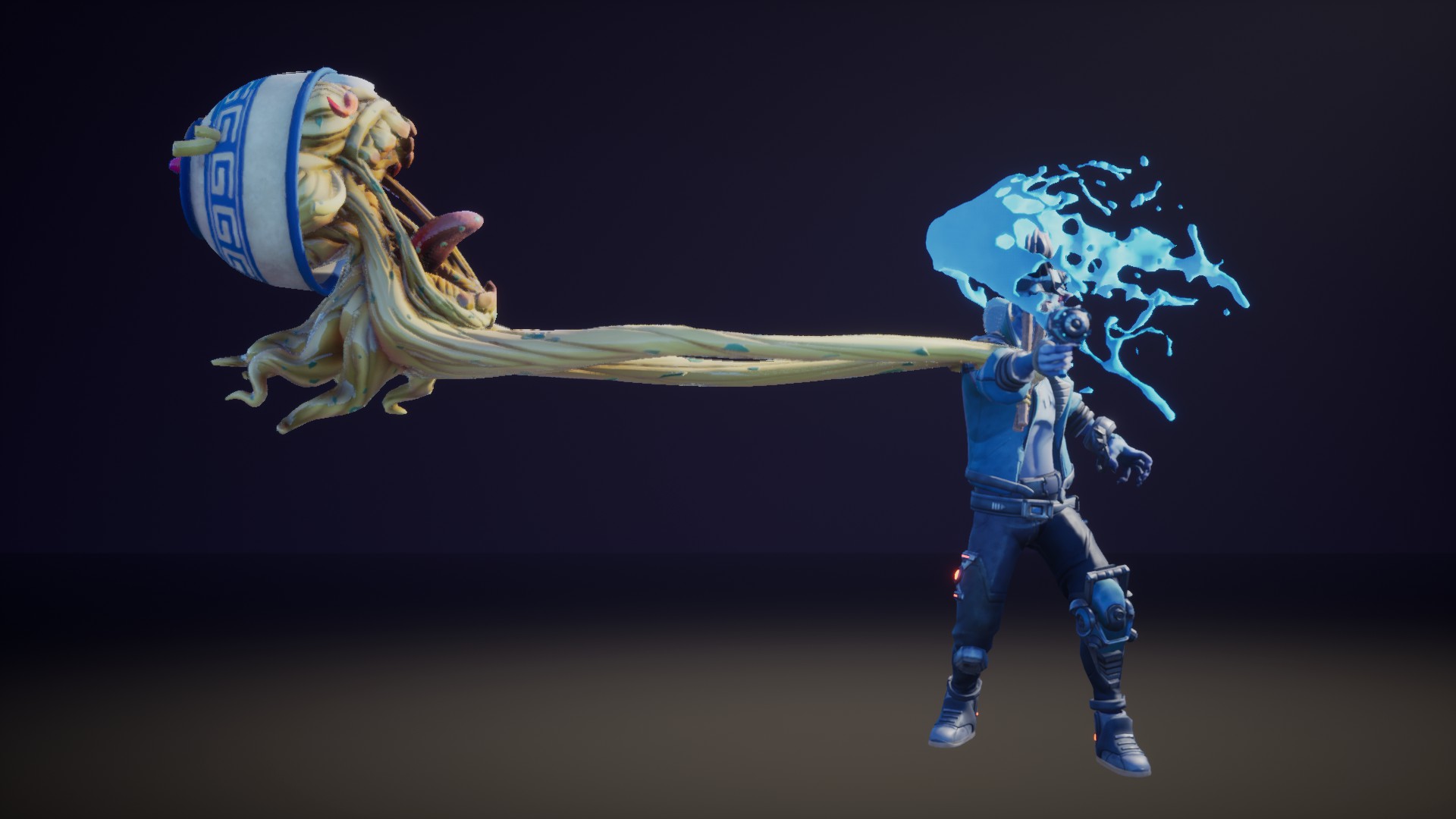 I know extra content is coming for free in the future, but I can’t see many players sticking around until that releases. The player count is already dwindling a week from launch. On day one, I was able to find matches within seconds, but now I can wait upwards of five minutes before lobbies fill up. You thankfully don’t need full lobby to start a match, but that does not bode well for longevity.

To some, I might sound a little harsh on what is a budget title, though. For $19.99, I can’t claim the content on offer is spare. It’s just that maintaining interest in what is available is a tough prospect. With matches taking around 20 minutes to finish, it becomes a slog to play for extended periods at a time. During my review process, I’d play for roughly an hour and then get bored, stopping for a bit and returning later. It only took me as long as it has to write this because I just don’t feel compelled to keep playing.

That’s the sad reality about Vicious Circle. This isn’t a bad idea, but the game doesn’t do much to justify its existence.