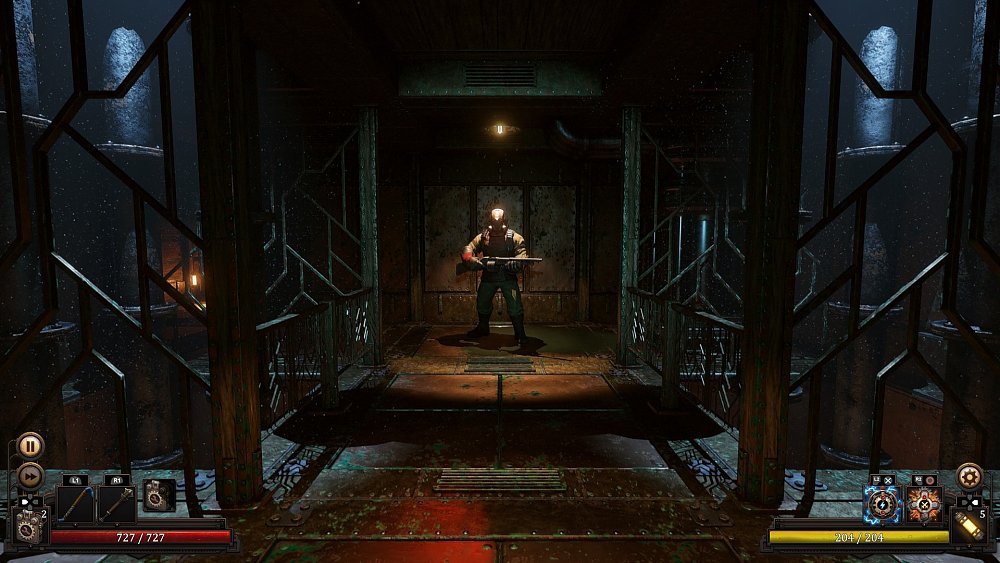 A tower of monsters

I feel like grid-based dungeon crawlers are few and far between these days. With the exception of a wide array of Etrian Odyssey games available on the 3DS, it can be a particularly tough itch to scratch.

Fatbot Games’ Vaporum, however, is a very well-realized example of the genre. The maps are well designed, enemies are engaging and there’s some surprisingly great voice acting for a little indie game. It’s an excellent, crisp little package and one that can pull you into its world pretty fast. 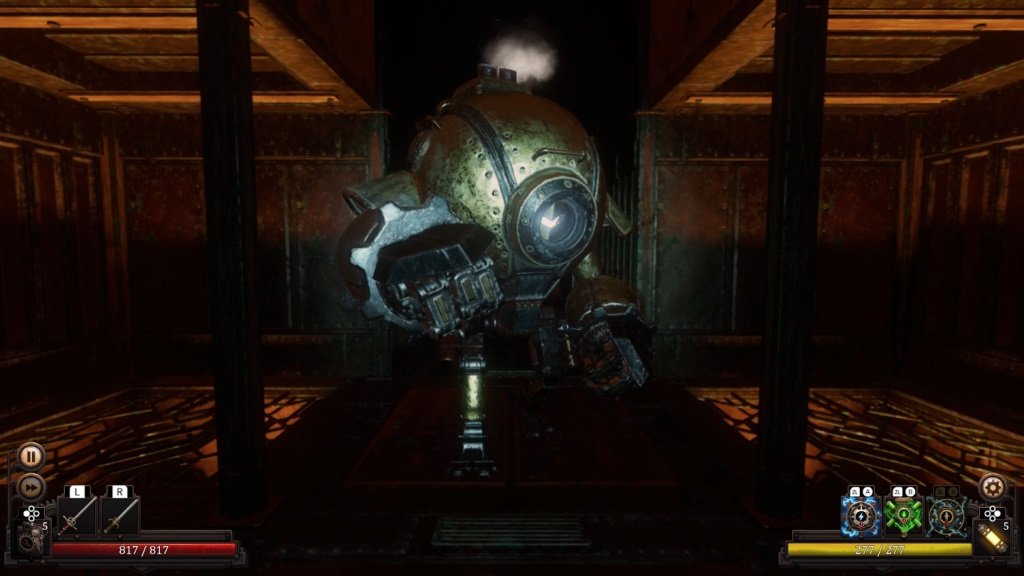 Vaporum is a steampunk dungeon-crawler, as such you’ll fight your way through hordes of mechanical spiders and steam-billowing mechs using swords, hammers, guns – whatever else you can get your hands on – and  all experienced from a first-person perspective. In the early moments of Vaporum, the player character finds themselves waking up in front of a mysterious tower in the middle of the sea. Rather than it leading down to a nightmare city as in Bioshock, we find ourselves fighting upwards through some clockwork monsters, searching for the secrets of what exactly happened here.

Early on, you’re given the choice of a few different exo-skeleton rigs to strap your character into. This initial choice can really dictate how you play going forward. You can pick a light, fast suit with minimal hit points, a beefy, slow one for crushing opponents with melee attacks; there are plenty of discrepancies. I went with the burly suit with a lot of health as I’m an unconfident fool.

You’ll gather a substance called Fumium for defeating enemies. Fumium acts as your experience and allows you to unlock circuits, which are essentially just skill points. You can use all of this to upgrade your damage with certain weapon types, gain new abilities through gadgets; there’s a lot of customization to be found. As I learned rather quickly, you’ll really want to focus into a specific type of gameplay, being an everyman isn’t something that works out in the long haul for Vaporum. The skill tree gets a bit more complicated the further down you go, and it’s best to find a playstyle that suits you early on and build off of that.

Combat is fun with a big focus on timing. Using the control sticks to step back and dodge, then lunging forward once the cooldown on your attack has worn off feels satisfying. If you’re looking for a pure strategy-based combat system, you can change your settings, so time is only active while you’re moving, giving you all the time you need to plan that next attack.

Vaporum has a lot of setting for player preference that can drastically change gameplay. If just slowing down combat isn’t enough for you, it’s even possible to make it so the game won’t automatically draw in the tower’s map for you. This one seemed like a treat for the hardcore pen and paper crowd and was decidedly not for me.

When you’re not bashing steam-spewing robots with sledgehammers Vaporum has plenty of puzzle solving to do. Never anything too complicated, push a block here, press a button or turn a mechanism there. Logic puzzles just complicated enough to break up combat and keep you on your toes. 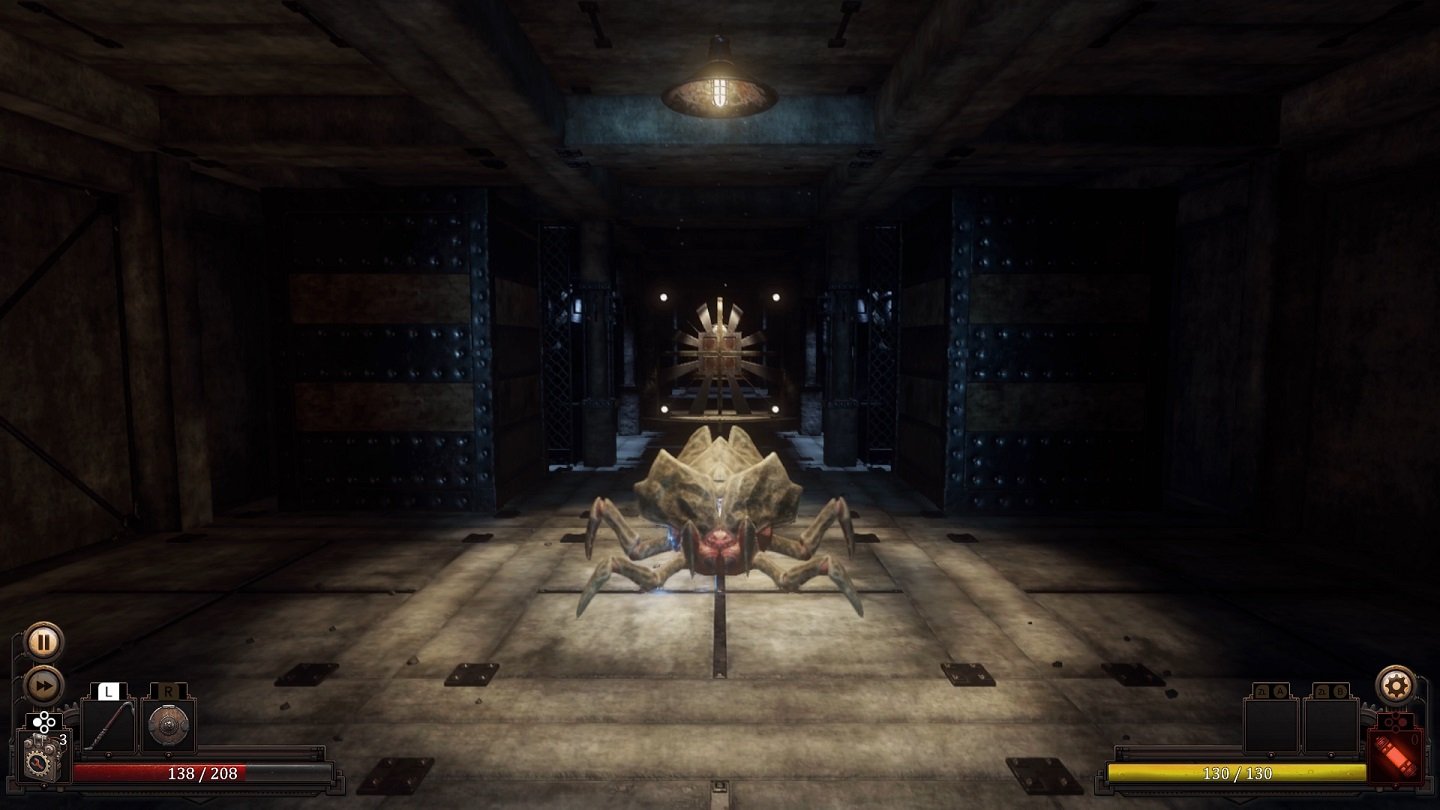 While you move through the mysterious tower, you’ll find that the best weapons and items are often tucked away in secret passages. These passages can only be accessed by finding hidden buttons on objects and walls; it’s this design choice that ends up making the console controls feel incredibly strange at times.  When playing on PC, it’s as simple as dragging your cursor over the buttons and clicking on them. On the PS4 you need to hold down the right trigger to make a cursor appear, then pull it over to the hidden button.

This system works, but it’s slow and makes it way easier to parse over the hidden loot. I’m sure I missed my fair share of it.

On the narrative end, Vaporum is more than engaging enough. Surprisingly well-performed audio logs litter the halls, telling the story of our clockwork tower. On the visual side, the halls are dimly lit and filled with clunking robots and steam spouting pipes. Nothing revolutionary, but it’s a pretty good steampunk fantasy world. 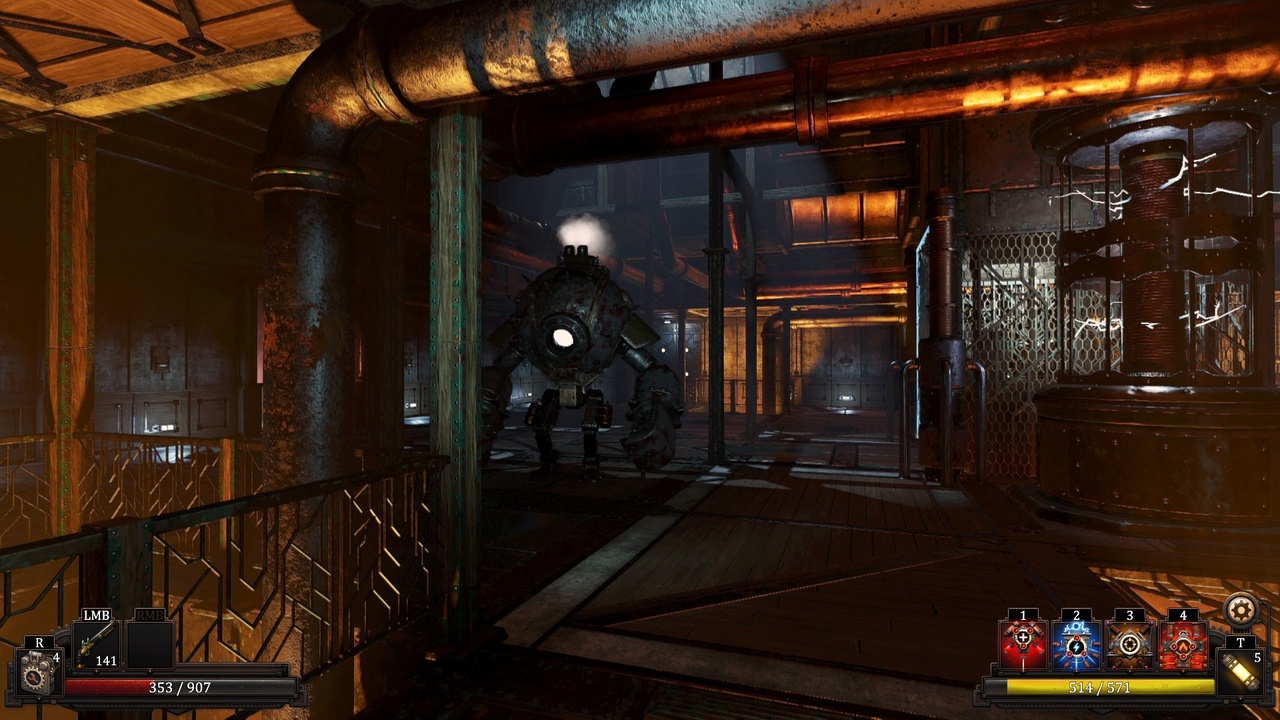 As a full package, Vaporum is pretty great. A well polished and challenging dungeon crawler set within an exciting world. Although the controls can sometimes be a bit of a pain for the console editions, we see so few games in this genre today that the minor headaches are worth struggling through.