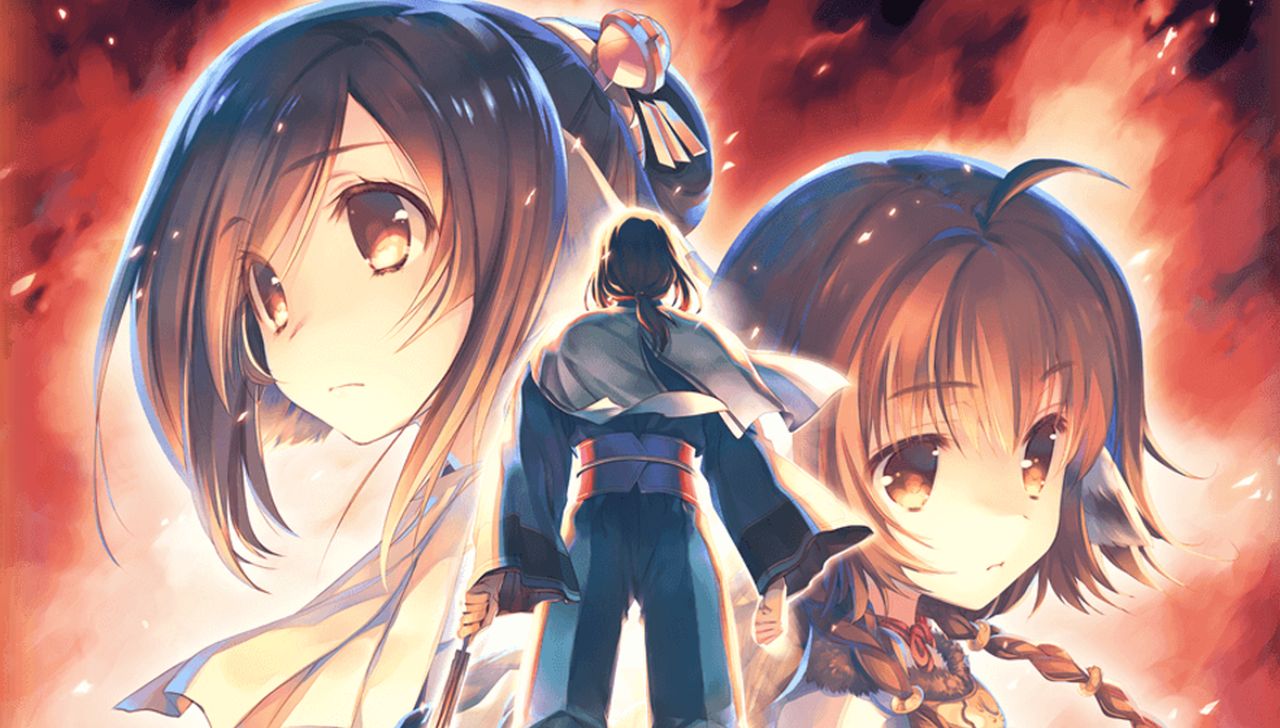 The Man In The Anime Mask

There’s really only one question that prospective players of Utawarerumono: Mask of Truth need to ask themselves as they consider whether or not to pick up the game, and that is:

“Did I play and enjoy Utawarerumono: Mask of Deception?”

If the answer to the above question is “Yes,” then getting and playing Mask of Truth is a no-brainer. Chances are folks who answered “Yes” are already playing the game.

As for the Nays, things can get a little more complicated. 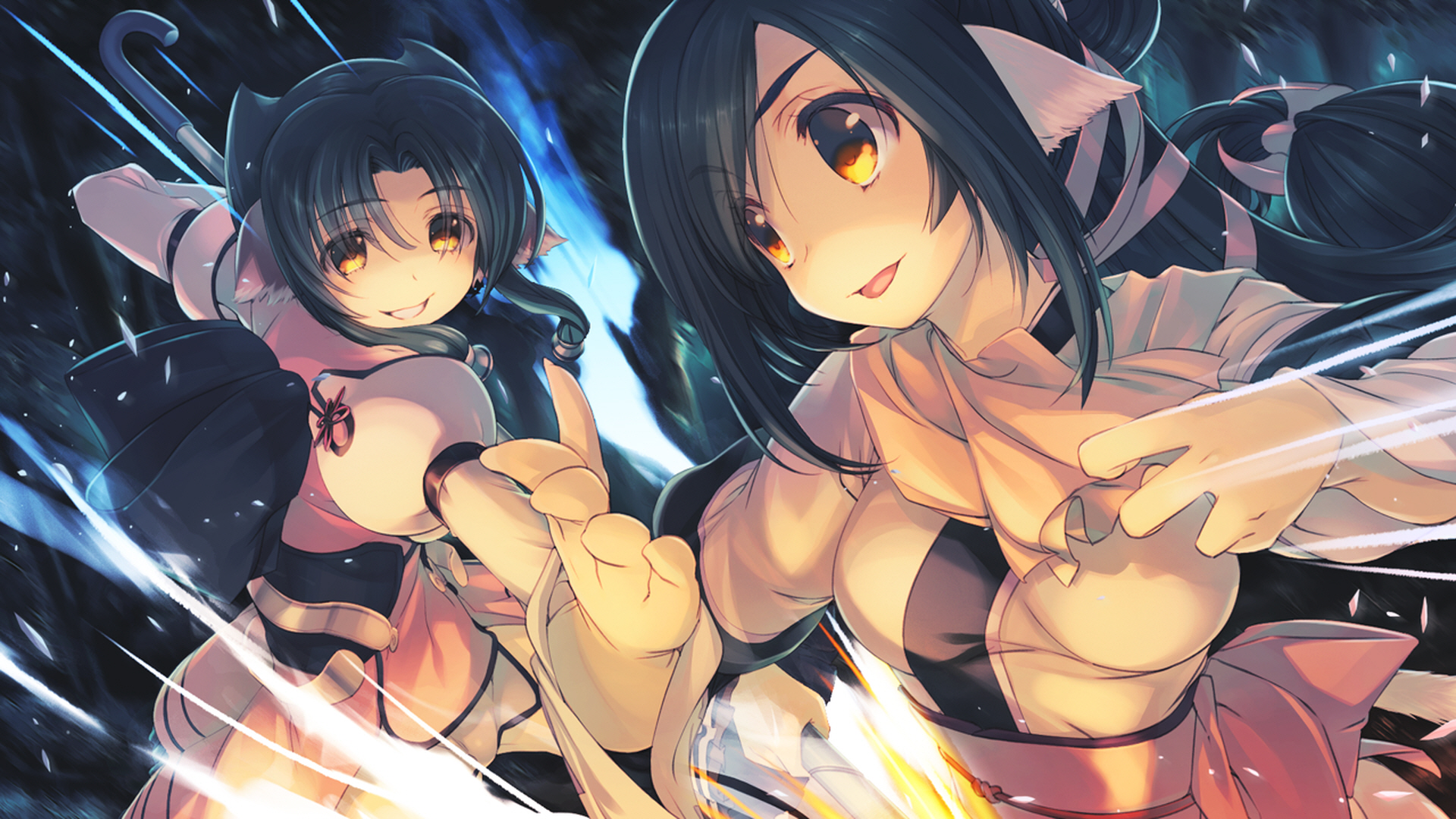 [Note: This review doesn’t contain direct spoilers of plot points in Mask of Truth, but will mention major plot points and the ending of Mask of Deception.]

Well, they can get complicated if they don’t actually want to play Mask of Deception first. Mask of Truth is a direct continuation of that story, and despite a helpful recap and a detailed prologue, most events will lack impact without at least some experience playing the previous game. Some players could theoretically get by viewing Mask of Deception‘s anime adaptation, Utawarerumono: The False Faces, but that is an imperfect solution, as The False Faces is a far inferior work that ends up doing both games a disservice.

In any case, Mask of Truth‘s campaign hits the ground running, picking up right after the ending of the previous game. It sets a new, grim status quo for protagonist Haku, his pals, and the empire of Yamato. The Emperor, the Mikado, is dead, and his daughter, Crown Princess Anju, is in peril. Oshtor, the Imperial Guard of the Right, left his duties to Haku, then went and got himself killed in a huge kaiju fight with the insane general Vurai.

Now Haku must take up the fallen man’s metal “Akuruka” mask, inheriting Oshtor’s identity as well as his charge: To protect his home province of Ennakamuy, and eventually restore Anju to her rightful place as the ruler of Yamato. In his way are the Empire’s elite Pillar Generals, as well as the conspirators that assassinated the Mikado in the first place. Even foreign threats abound, especially Tuskur, a powerful neighbor and the central setting of the original Utawarerumono story, as well as the home of Haku’s closest companion, Kuon. 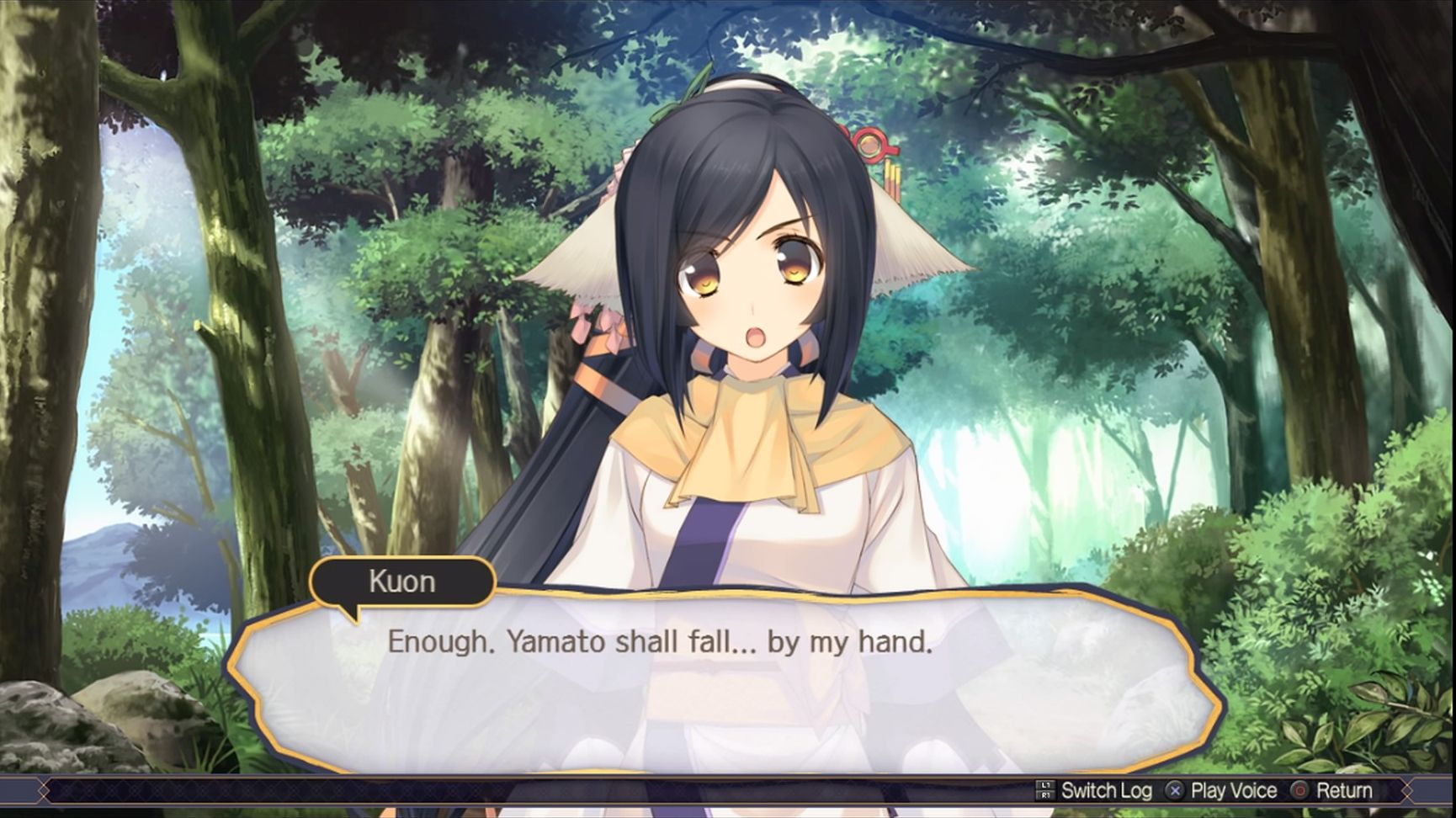 There’s certain irony in Atlus’ choice of titles for this duology, seeing as where Mask of Deception – the first game – revealed a great many “truths” about the nature of the setting (including the bonkers sci-fi twists that made Utawarerumono famous to begin with), Mask of Truth’s main narrative throughline involves Haku own massive “deception”. To achieve his goals, he must lie to basically everyone he knows, convincing them through word and deed that he is the stern, honorable, dutiful general Oshtor, and that Haku, the lazy, rude, brilliant tactician they knew and fell in love with died on the battlefield.

It helps that the first-person perspective of most of the writing, and a standout performance by voice actor Keiji Fujiwara, effectively sells the struggle of Haku trying to portray a person that is his temperamental opposite. This makes the few moments where Haku chooses to lapse into his former self all the more dramatic, as well as giving Haku as a character an interesting perspective, having the opportunity to see, in the guise of Oshtor, how his allies and enemies alike cope with Haku’s absence. Everyone gets their due, and it’s filtered through the lens of that loss. 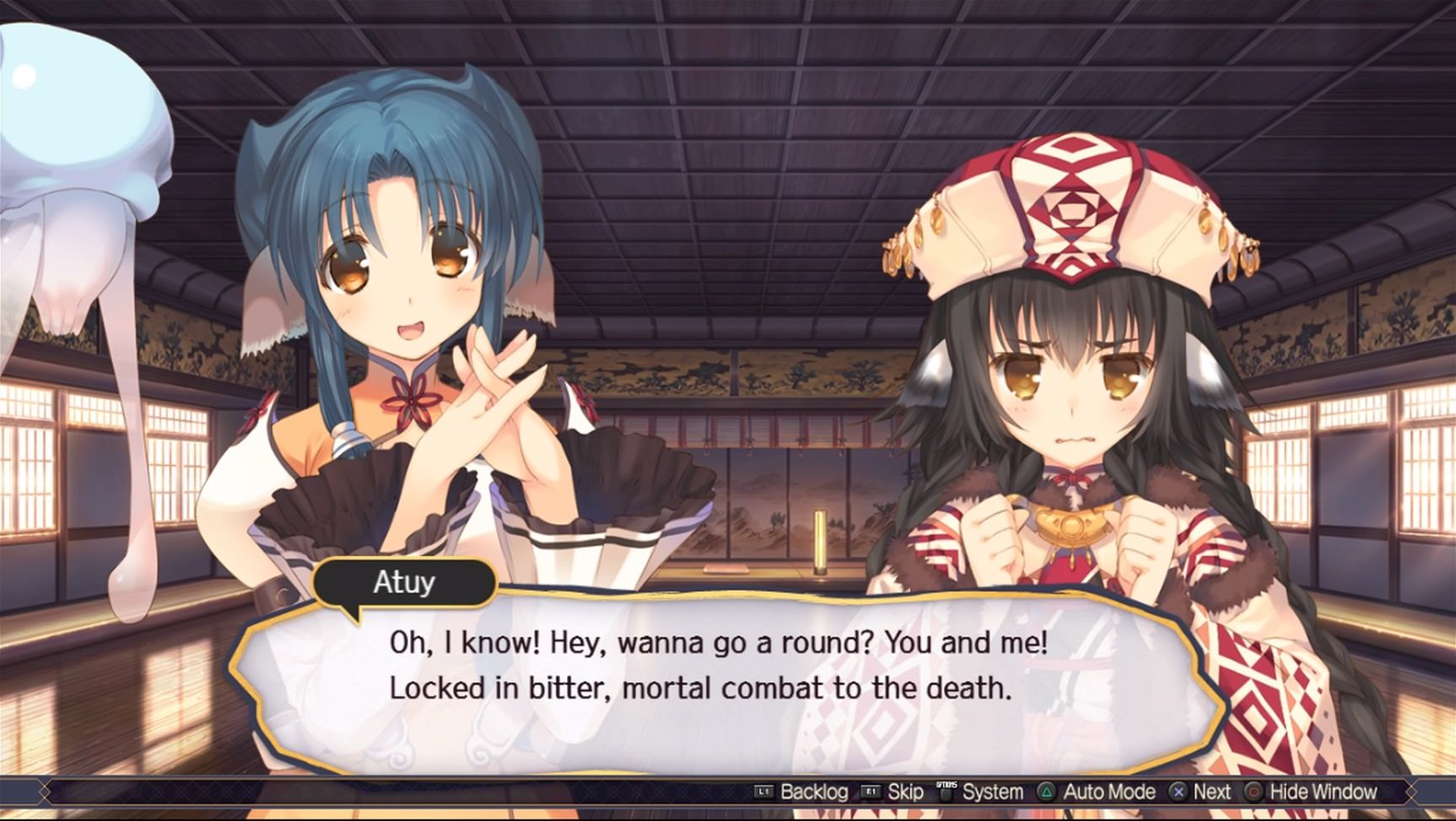 The escalated sense of stakes and impact of the new status quo almost (almost!) justifies the meandering, glacial pace of Mask of Deception. Being primarily a visual novel, it couldn’t rely on mundane gameplay to build the bonds players tend to form with their party members. It couldn’t use a progression system, character customization, or day-to-day time management mechanics to undergird the drama. It needed time spent and chose to spend it building up an investment of emotion that, in Mask of Truth, players and characters will end up seeing as their bygone salad days, a time period that they’re willing to fight and even kill to reclaim.

But while Mask of Truth does feel tighter and more coherent than what came before, this isn’t to say that it gets the job done any faster. In fact, it’s easily twice as long as Mask of Deception, with Mask of Truth’s main campaign alone stretching past fifty hours, depending on one’s reading speed and willingness to skip past the voice acting. 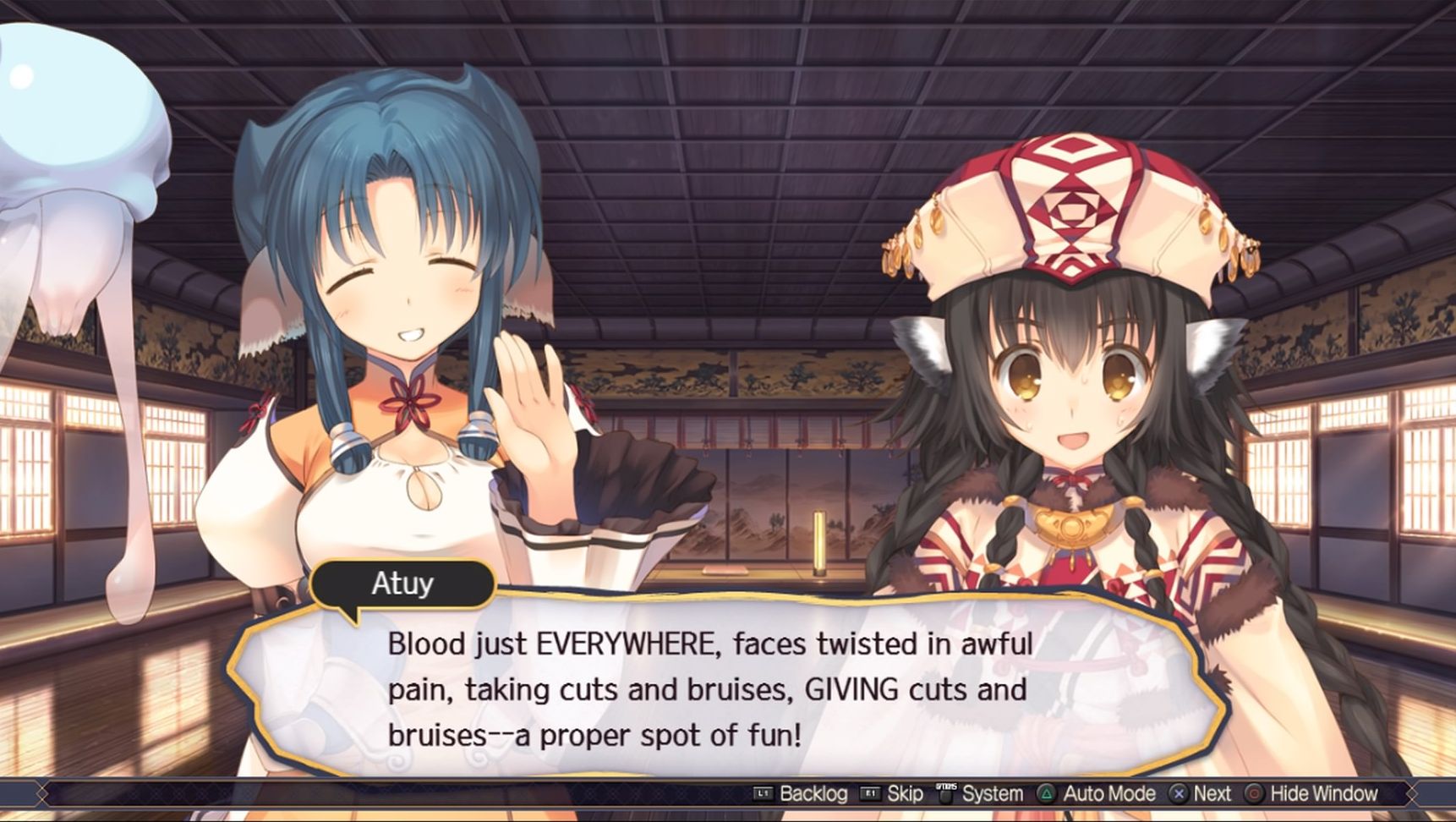 Those who worried that the plot might get preoccupied with serious business and epic moments needn’t do so, though. If anything, the game’s active embrace of anime and JRPG tropes (and the scenes that fulfill them) feels slightly more jarring against the background of a brewing, savage civil war than the more mundane adventurism of Mask of Deception. Further, some of the more romantic scenes can seem a bit awkward considering that the viewpoint character (Haku) basically faked his own death, and is now courting girls on the rebound while disguised as the guy they loved’s boss.

And yet, I can’t bring myself to complain about it too much. Some of this comes from an otaku’s naturally high tolerance for “anime bullshit”, but the rest comes because the game is simply easy to like, provided one is willing to sit down and give it the time it wants. It’s earnest in a way most modern fantasy stories aren’t, and appreciates the value of creating a setting players can simply wallow in without a care as to whether all the nonsense they’re absorbing has “real-world” value.

This is most exemplified in the game’s voluminous glossary. As in the first game, it illuminates Utawarerumono‘s gibberish-filled lexicon, defining terms from “Amamunii” to “Yatanawarabe”. More importantly, though, it highlights the topics with illustrated entries highlighting a diverse range of topics, from the names of Yamato’s Eight Pillar Generals to the qualities of the homemade cream puffs princess Rulutieh devised in the Hakuroraku kitchen. 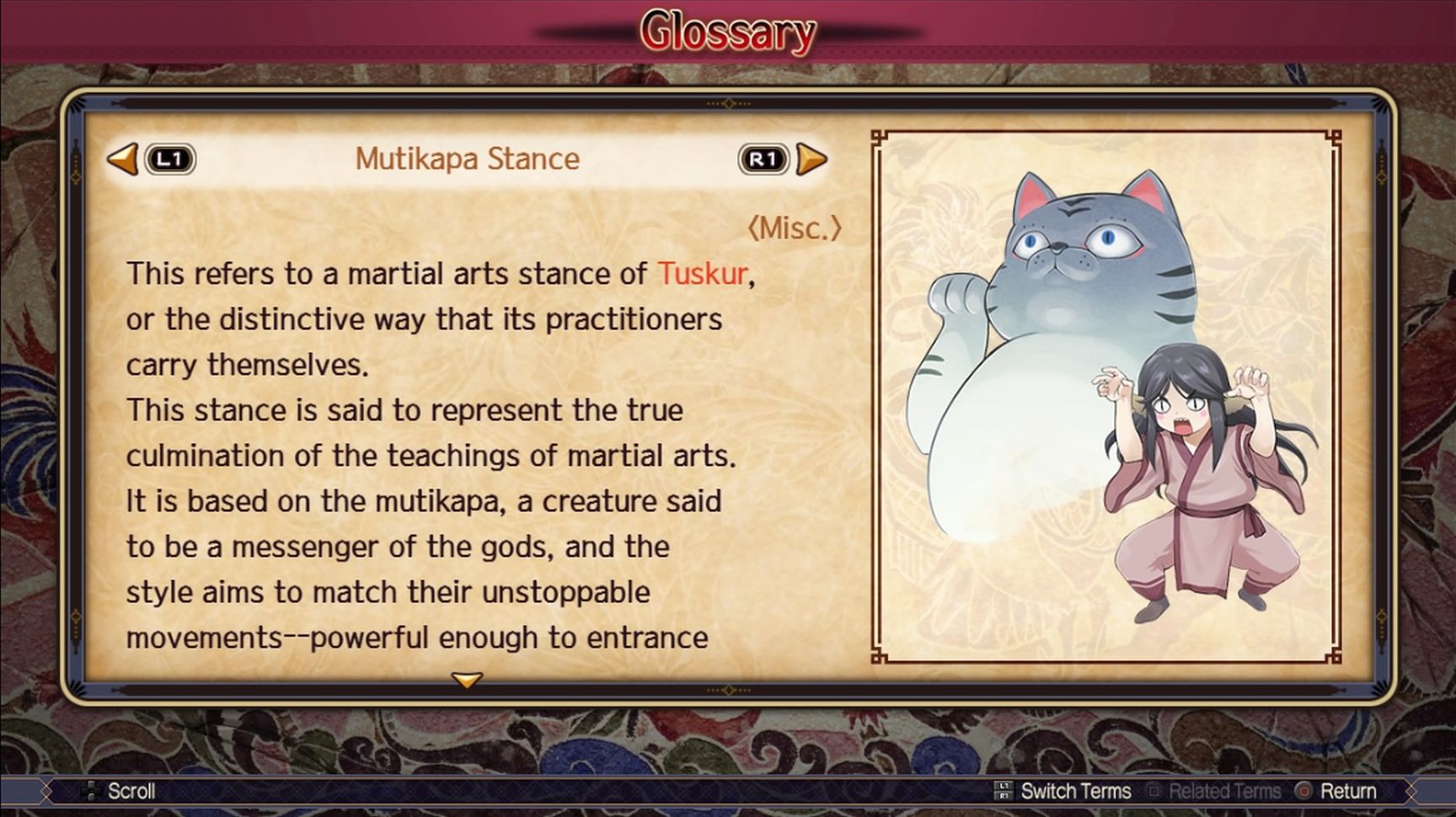 The text is well-written and localized, and the entries seemingly selected for maximum fluff rather than versimilitude. Utawarerumono appreciates that sometimes it’s less important to show the exact size and shape of Yamato’s geography than to let players know that the people in it love black tea and steam rooms, whereas Tuskur folk prefer green tea and soaking in hot tubs. In short, Utawarerumono ends up a pleasure to learn more about.

Unfortunately, the experience of actually playing the game is more or less unchanged from before. The battle system is unchanged bar the addition of new, cooperative attacks, and the missions themselves feel as perfunctory as they were previously, meaning they can be completed with a minimum of effort and skill on normal difficulty. The presentation is as sharp as before, using the color and simplicity of its Vita-level polygon counts to jazz up the art style with painterly flourishes and some over-the-top animations. The Vita version of the game works identically, though with more aliasing and a lower base framerate.

Optional challenge maps and a free battle mode allow players to really master what’s there, but unlike the narrative, “getting good” at Mask of Truth‘s battles is an activity that doesn’t feel like it has much payoff. Better to spend that time reading about fictional food or listening to an animal-eared girl get a vaguely suggestive backrub.

Utawarerumono: Mask of Truth‘s strengths aren’t entirely justified by the sheer amount of time it would take to experience them in full, but anyone that’s already willing to give it that time – or those who come in with properly calibrated expectations – will find an entertaining saga that’s worth seeing through.