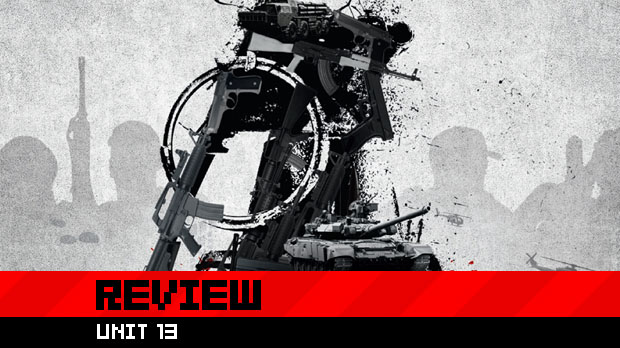 Zipper Interactive is generally regarded to have done a pretty exemplary job when it came to providing staple console experiences in a portable format. Despite the input limitations of the PlayStation Portable, Zipper was able to launch SOCOM: U.S. Navy SEALs Fireteam Bravo to a positive reception, and developed a sequel a year later.

The PlayStation Vita removes the need for compromise with its dual analog sticks and touch technology, allowing Zipper to create an even more authentic SOCOM experience. Zipper has certainly managed to come close, though with a brand new IP, debuting on the new system with Unit 13.

Unit 13 could be considered a spiritual successor to SOCOM, given that it plays similarly and revolves around the same grounded, military-based scenarios as seen in Zipper’s previous titles. At heart, this is a cover-based military shooter with no higher ambition than to be just that. If you like military shooters, you’ve certainly come to the right place. If you don’t, then you can safely jog on.

What sets Unit 13 apart isn’t so much the way it plays, but the way it is presented. Rather than let any actual story get in the way, Unit 13 is split into a number of missions that can be played out of sequence, and a choice of characters with their own unique set of weapons and skills. There’s definitely a premise, concerning an elite group of soldiers and some terrorists, but it’s all easily disposable fluff. There are thirty-six main missions, although most are locked until other missions have been beaten, and each one can be played solo or with an online co-op partner … provided players input an online pass.

Missions aren’t simply a case of shooting everything that moves. There are a number of objectives to complete in each level, ranging from assassinations to rescues to bomb disposals. In addition, missions are split into special categories, each with their own unique conditions for victory or failure. These categories — Direct Action, Covert, Deadline, and Elite — are designed to exploit the strengths of certain characters, and can be very strict about their conditions.

Direct Action is the simplest type of mission, based around multiple objectives with no specific restrictions. In Covert operations, players cannot trip any alarm systems or get spotted by cameras, and they’ll need to quickly take out enemies if spotted. Deadline sets a strict time limit on the player and favors characters that can pack a lot of firepower. Elite is by far the toughest type of mission, since the ability to passively regain health has been taken out and players can only heal at specific checkpoints. Given how few bullets even the toughest character can absorb, it’s generally a good idea to never get hit, and it can be as difficult as it sounds.

In addition to the thirty-six main missions, there are also nine High Value Target operations, unlocked by earning rank stars in the regular stages. These special assassinations pit players against increasingly protected terrorist soldiers and almost act as boss levels. They get very challenging very quickly, and represent some of the largest obstacles in the game. Once beaten, they can be sent to other players who might not have unlocked them yet, which is a cool little feature.

This impressive selection of content is rounded out by a daily challenge. This is a unique mission that can be obtained and completed once a day by logging into the PlayStation Network. The daily mission, as well as all other stages, are tied together by local and global leaderboards, so players are constantly competing for highest missions scores. For the most competitive players out there, the daily challenges alone ought to provide near endless replay value.

Speaking of which, each of the available missions can be played in “dynamic” mode, which randomizes the objectives and once again adds as much replay as the player can stand. Each of the game’s characters can also be leveled up ten times, gaining unique scoring abilities and unlocking extra weapons or upgrades. It has to be said that Zipper did a great job of providing plenty to do.

The structure of Unit 13 is terrific, and perfectly suited to a portable experience. Once the actual meat of the game is torn into, however, things are a little less consistent. For the most part, this is a solid cover-based shooter with an enjoyable, if predictable, range of objectives and plenty of masked terrorists to kill. The Direct Action and Covert missions are especially entertaining, as is the scoring system that constantly rewards players for headshots, bomb disposals, and more flavorful methods of taking out the enemy. However, random difficulty spikes, spotty enemy behavior, and a number of poorly thought-out missions dish out just as much frustration as amusement.

Enemy behavior in certain missions can be especially irritating, especially on levels where they will constantly spam the room with grenades. Even worse is the fact that these grenades have a pretty large radius and will one-hit kill the player if stood anywhere within it. Enemies are also not afraid to break cover and harass the player with shotgun-toting soldiers that turn characters into kibble within seconds, and there are even stages with respawning opponents. These little tricks aren’t random, either — they’ve been specifically designed for certain missions, and they make those missions thoroughly objectionable.

It doesn’t help that, despite having several characters to choose from, only a handful are useful. In fact, the Gunner character should be the default choice for everything except covert missions. Unit 13 “helpfully” recommends an operative for each stage, but its recommendations are best largely ignored. Sorry, but the chap with the shotgun designed for close encounters has no place on an Elite level — or, in fact, any level, given how combat is designed to only slaughter those who don’t stay a wise distance from the enemy.

At times, the strict restrictions placed on Deadline and Elite missions can lead to failures so annoying that one has to resist tossing the Vita at a wall. Even without the harsh conditions imposed on the player, they’re just not all that fun. They feel needlessly stressful and amount more to work than anything enjoyable, especially on the longer missions that can take a considerable amount of time to do. While covert stages are well thought out and Direct Action provides simple, no-fuss excitement, the two alternative modes can be a real drag.

That said, however, the co-op function goes a considerable length toward mitigating these problems, and it’s highly recommended that you go into Deadline and Elite with a partner. Not only do missions go by a lot faster with two guns blazing, enemies can be smartly outflanked, and players are able to revive each other, providing an appreciated second chance to scrape out a win. This extra advantage helps make each mission a lot more pleasant, especially with the fact that the Vita’s built-in mic and speakers can be used to deliver some surprisingly effective voice chat. Co-op games run smoothly — though I had to reset my Vita in order to get matchmaking to work at one point — and generally a lot of fun can be had teaming up with a friend in order to smash those objectives.

Another note of praise must be reserved for Unit 13‘s controls. As expected, Zipper has exploited the expanded input to provide a traditional experience, with right-stick aiming that serves the kind of shooter experience players expect. However, what really impresses me is the elegant way that touch controls have been integrated into the system. Players can touch a symbol onscreen to toss a grenade, and contextual icons also appear on either side to push buttons, disarm bombs, or vault over cover. These icons have been beautifully positioned right by the D-pad and face buttons, so that they feel like a natural extension of the normal controls, and are incredibly comfortable to use. Along with Mutant Blobs Attack, Zipper’s debut performance stands as a shining example of how touch controls can be used to enhance a game, rather than get in the way. All it takes is a little subtlety, and I believe Zipper’s handled it wonderfully.

Unit 13 isn’t exactly Uncharted: Golden Abyss, but it’s far from the ugliest Vita game on the market. While environments are fairly sparse and mundane, character models are nicely detailed, and there are some suitably pretty explosions at the right moments. I have noticed a few visual glitches, most notably with enemy soldiers becoming stuck in a cover transition animation, skipping up and down rapidly until shot at. Those players sick of brown military shooters won’t be wowed by the art direction either, which is as ordinary and unremarkable as any other entry in the genre.

It’s hard to say for sure, so early into the Vita’s life, whether or not Unit 13 will be an essential game. There are yet no comparable experiences with which to draw from, and while Zipper’s game impresses with its snappy presentation and nicely implemented controls, there’s no telling how it’ll look next to similar games released in future. Is this the best the PS Vita will be able to give the third-person shooter genre, or will something better come along to make this game look outmoded and poor?

These questions come up because one needs to decide which of Unit 13‘s setbacks are a result of design or hardware, and there’s no way of telling how we’ll look back on it. Saying it’s great “as far as portable shooters go” will become retroactively silly if a far higher standard is met in the future. Right now, Unit 13 is unequivocally the best portable shooter available, due in large part to the PlayStation Vita and its new controls. However, there are certainly a number of aggravating issues with the mission structure, and the gameplay itself is fairly ordinary and likely would be considered highly forgettable by home console standards. Unit 13 is the best because it is first, not necessarily because it is particularly great.

With that in mind, one can only really look at what it provides on its own, right now, and that’s a sleekly structured collection of portable shooting missions that won’t set the world on fire, but definitely provide some entertaining handheld thrills. When Unit 13 is fun, it’s really very fun. When Unit 13 is not fun, it becomes far too much like hard work. Overall, however, the revelry outweighs the rage and with an embarrassment of content, not to mention some cool cooperative action, Zipper Interactive’s first Vita outing scrapes by with a net win.

In years to come, Unit 13 will likely not be remembered by a great many people, but for right now, it’s a good indicator of what the future of console-equivalent experiences will feel like on Sony’s newest portable. The future’s looking promising.