Twisted Metal 2 is one of the greatest videogames to ever grace the original PlayStation, and that’s an undeniable scientific fact. Though my personal relationship with the series has been a spotty affair, my love for TM2′s inimitable blend of sadistic humor and car-on-car violence has carved a bloody hole in my heart, one that’s remained gaping for years.

A new Twisted Metal for the PlayStation 3 has been a long time coming, and arrives not a moment too soon. However, while it remains at heart a classic example of vehicular battery, its misinformed attempts at modernization cause a little concern.

The latest chapter in the series, from Eat Sleep Play, indicates that some franchises really ought to stick to what they know. 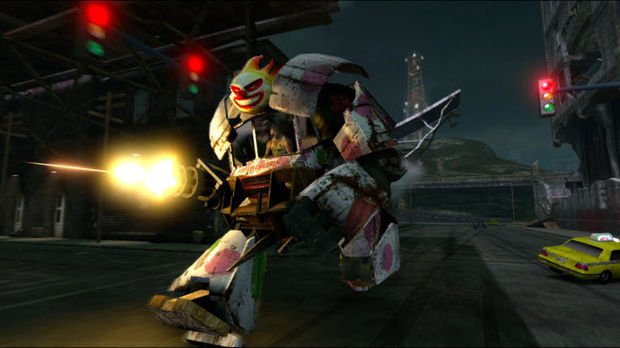 Although almost every Twisted Metal game exists within its own narrative bubble, this freshest iteration is as close to a full reboot as the series can get. The large cast of colorful characters, each with their own sick goals and personalized vehicles, has been tossed entirely out of the window in favor of one unified storyline. There are only four main characters — Sweet Tooth, Mr. Grimm, Dollface and Preacher (who doesn’t have his own story levels) — all of whom are totally reimagined as darker and, dare I say it, slightly more grounded characters. At least, as grounded as a demonic serial killer clown can get. Their tales intertwine as they each sequentially enter the Twisted Metal tournament, hoping to win their ultimate wish from the nefarious Calypso — and suffer an ironic fate in the process.

There is still a large variety of cars, although they are now operated by generic “gang” members inspired by the four named drivers. Familiar rides such as Sweet Tooth’s ice cream truck and heavily armored Warthog are joined by such unique vehicles as the Meatwagon (a bloodstained ambulance that fires explosive patients strapped to remote-controlled gurneys) and the Junkyard Dog (a pickup truck that flings entire taxis at opponents). While many cars are unlocked during the course of campaign play, some of the more elusive rides will take momentous feats to obtain, such as completing all the story challenges on Twisted difficulty … and getting a gold medal in every one! Each car can also be given a custom paint job, for that all-important personal touch.

At its root, the familiar combat of Twisted Metal remains almost entirely intact. Whether you’ve been a longtime follower of the series or haven’t touched it in years, the steel butchery on offer is instantly recognizable. A variety of wide-open arenas are designed wonderfully for exaggerated destruction derby gameplay, as players fire rockets, lay mines, and rattle off machine gun fire in a bid to take down the opposition. Although the premise of cars shooting rockets at other cars is as shallow as ever, there’s still plenty of rough-and-ready amusement to be had. 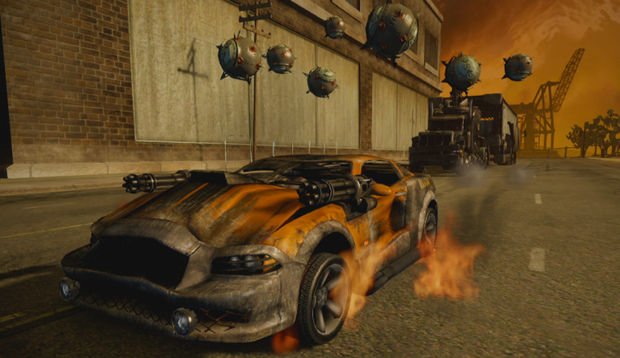 Each course is littered with weapon pickups, be they homing missiles, remote-controlled bomb carts, or deadly shotguns. Although each vehicle gets a permanent sidearm (such as a simple machine gun or a drive-by magnum), the expendable main weapons do far more damage. Cars also have unique special weapons that slowly recharge with time and vary in effectiveness. The Outlaw, for example, sports an SUV gun turret that locks onto a single enemy within a 360-degree radius, while the Roadboat features a magnet that can be used to trap an opponent and smash it into a wall (this trick in particular is an online troll’s dream). One of the biggest new additions is the series’ first flying vehicle, a helicopter known as Talon. Impressively, the helicopter does not break the game, as most weapons still lock onto it adequately and it remains fragile enough to be taken down in a few hits.

Car balance overall is quite remarkable. Smaller cars are great at avoiding incoming fire, but they’re naturally frail, while larger machines such as Darkside and Juggernaut can deal heavy damage while struggling to keep track of sleeker, more maneuverable foes. My personal favorite class is the “middle ground” type that includes such beasts as the Outlaw and Meatwagon, sporting less-than-average speed but decent armor ratings and firepower. Whatever way one prefers to dish out an automotive assault, there’s a car that does the trick.

Unfortunately for Twisted Metal, the game spends far too much of its time trying not to do the one thing it’s truly great at. This is evident in the single-player campaign, which is annoying at best and excruciatingly nightmarish at worst. Aside from the fact that playing against the CPU isn’t much fun in the first place, the range of forced, gimmicky game modes that one must suffer in order to progress ruins the entire experience. 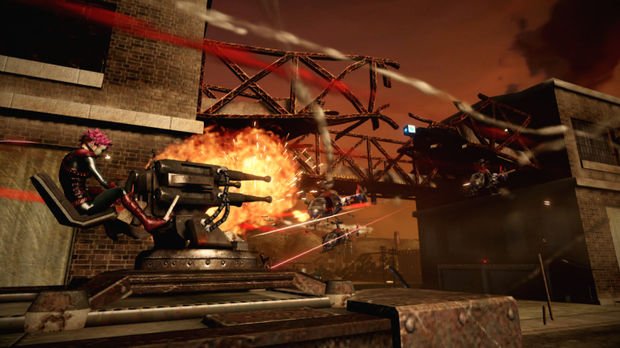 By far the greatest offenders are the racing stages, which simply do not work. None of the courses are designed well enough for races, nor are the cartoonish car physics that see vehicles spinning wildly at the slightest clip. In a multiplayer scenario, this could be amusing, but in a solo race against aggressive A.I. that trains all enemy vehicles on the human player, it’s nothing short of an ordeal. During races, enemy drivers are concerned only with making sure you don’t win, even at their own expense. They’ll fire weapons at nobody but you — even firing behind themselves — and they have no issue with running you off the road and into a wall, merrily sacrificing their position in the race to screw over a human player. Add to that the fact that it’s almost impossible to catch up to the front-runner should one run afoul of the many chasms and obstacles, and one has a recipe for distilled, controller-destroying fury.

Much of the racing revolves around trial and error; players are expected to fail dozens of times in order to learn every inch of the racetrack. Even arming oneself with such knowledge might not be good enough, however, and I’m certain that only the lucky will beat the penultimate race on the first, second, or third try. I’m yet to do it, thanks to the random clipping and pitfalls that effectively kill the race before it’s officially over. It’s far too much patience than one should be expected to have.

All this is before I mention the lengthy boss fights, which often require pure luck in order to complete. Such battles are not what one plays Twisted Metal for, and they ruin the experience. I’m all for variety and new ideas, but only if they’re done well. In this game, they’re forced, contrived, and slapdash.

It saddens me that the campaign is so miserable, as its live-action story cutscenes and stylish, twist-in-the-tale storytelling are both fantastic. The grisly narrative arcs of Twisted Metal’s grotesque anti-heroes are delightful, especially for someone who has always enjoyed the series’ dark humor. Not only that, but every woeful tale feels like an episode of The Twilight Zone or Tales from the Crypt, which only adds to the entertainment value. Unfortunately, the narrative isn’t quite good enough to justify the hassle it takes to uncover. Still, I’ll say one thing for the campaign: those who think games are too easy these days can look forward to all their masochistic dreams coming true thanks to this little fiasco. 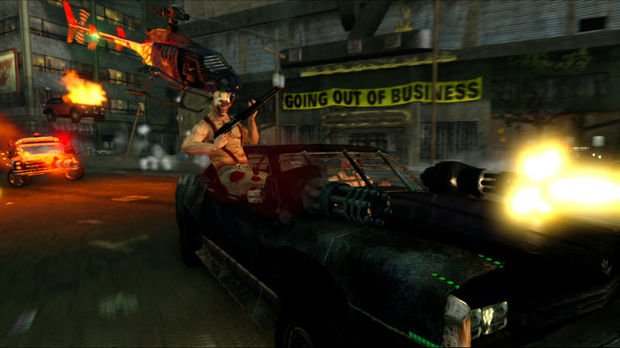 Fortunately, Twisted Metal’s draw is not found in the campaign and its range of forced, unenjoyable game modes. My desire to kick the game’s Blu-ray into a river dissipated with extended time spent online. I didn’t play as much as I would’ve liked to, thanks to a disconcerting number of network errors, but I had a blast with the games I got into.

There is a range of game modes that keep the focus on simple, unfettered, 16-player car combat, and these modes can provide enough entertainment to make up for other failures. Deathmatches and team deathmatches are joined by elimination rounds and “Hunted” games that play out like a brutal, murderous game of tag.

Nuke is a new objective-based mode that has teams capturing an enemy leader and dragging them across the streets to a missile launcher. After “sacrificing” the leader to the launcher, a nuclear missile is sent to destroy an enemy statue. Enemy teams can recapture the leader and stop the sacrifice, so teamwork is essential in order to secure victory. It’s a unique little spin on familiar competitive ideas, and should add a little longevity to the proceedings.

For those who don’t like going online, there’s great news — LAN and split-screen multiplayer is also supported, so there’s no excuse to not ditch the rubbish single-player and play the far superior competitive modes. 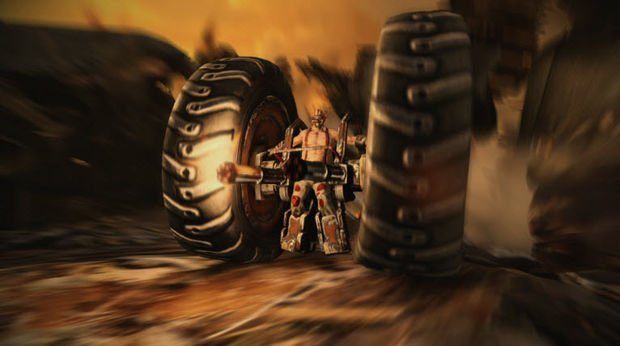 While it’s not the most graphically stunning PS3 game, Twisted Metal‘s destructible environments, squishy pedestrians and over-the-top, catapulting explosions at least make it one of the more visually exciting. An excellent soundtrack featuring tracks from Iggy Pop, White Zombie, Judas Priest, and Wolfmother complements the action wonderfully. When it comes to presentation and sheer, unabashed style, Eat Sleep Play has got it going on.

I did notice, however, that a few glitches reared their ugly heads occasionally. The sound can cut out suddenly for several seconds at a time, and I had one problem with a campaign elimination match that wouldn’t spawn the final car I needed to defeat. I had to restart the mission about three or four times before all the enemies finally appeared on the map. So far, I’ve encountered nothing that truly breaks the game, but there are a few technical hiccups on display.

When it sticks to what it’s good at, Twisted Metal provides plenty of homicidal — if rather disposable — entertainment. A number of modes and forced campaign levels that simply don’t work, however, set the experience back, and I think that the game could have been truly superb had less effort gone into the failed aspects and more been poured into the type of Twisted Metal that fans know and love.

For all its shortcomings and lack of depth, however, there really is no other car combat game that has the goods quite like Twisted Metal. It’s a solid entry in a series that’s difficult to hate, and hardcore destruction fans would do well to pick it up.