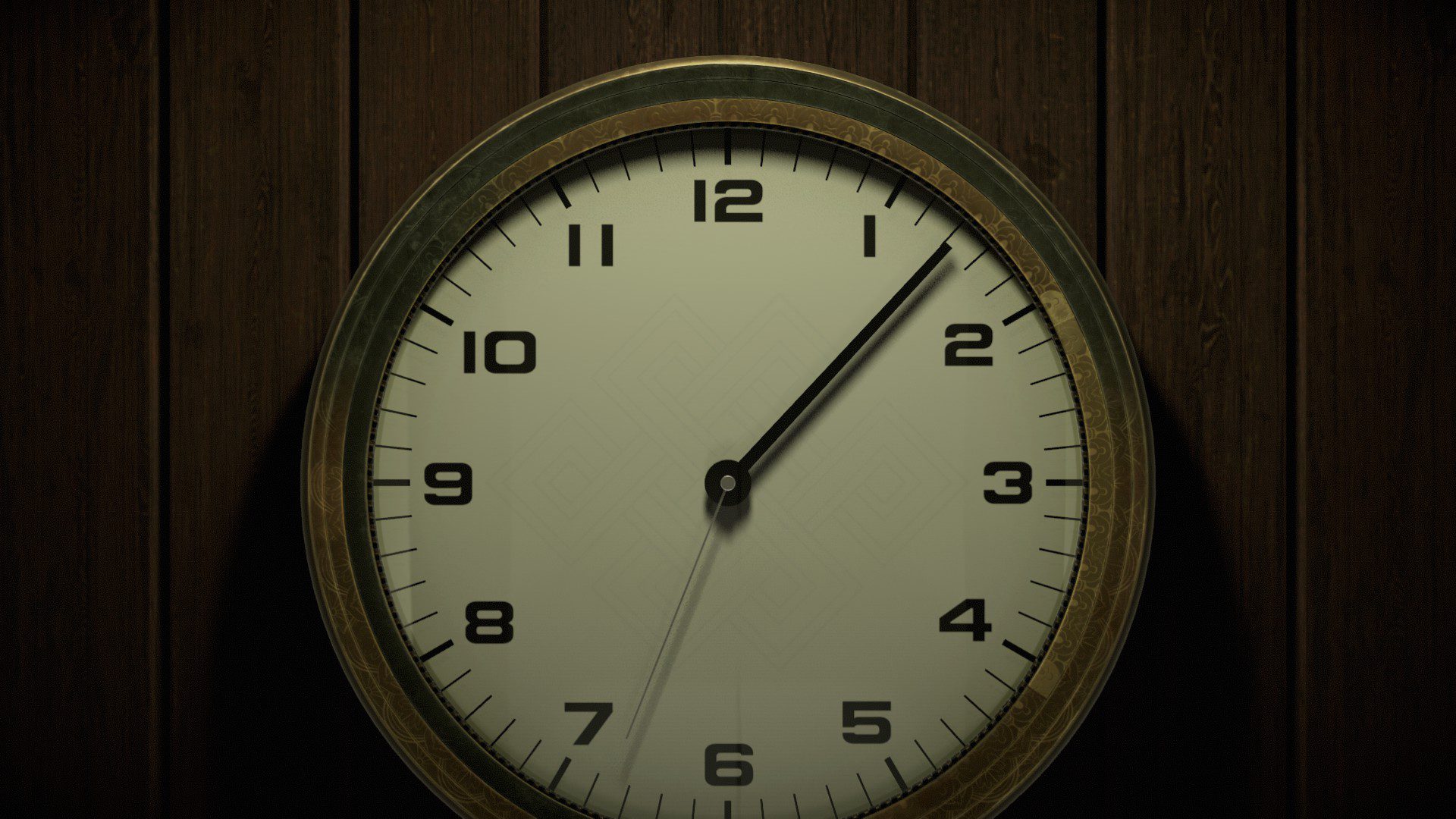 If I could turn back time

Twelve Minutes has been years in the making. Its setup of a man, a woman, an intruder, and a room, caught in a constant time loop, has been circling around most-anticipated lists for a while now. Yet despite the years and time loop games that have come out in the time since, Twelve Minutes still feels fresh, even when its loops get old.

The premise of Twelve Minutes is fairly easy to pick up: a husband comes home to his wife, who’s got a surprise in store. But the couple’s celebration is cut short when a cop arrives, claiming the wife is under arrest for the murder of her father eight years prior. Then, after enough time elapses or something more jarring happens, it loops back; the husband is re-entering the apartment, hearing the song his wife was humming before, and he’s back at the beginning.

Through repeated loops and experimentation, the goal becomes to learn more. What’s going on, why is the wife under arrest, what really happened, and is anyone who they say they are? In function, it’s very similar to older point-and-click adventure games. You direct the man around the room, interacting with objects and picking some up, allowing you to combine them or use them with the environment.

Discovery is a key part of Twelve Minutes‘ draw, and it’s why I’m treading really carefully so as to avoid anything vaguely spoiler-ish here. This story, possibly more so than most others, is about learning to link the dots and figure out what makes things happen. How can you manipulate the environment around you, changing variables to elicit new reactions from characters, or alter the tone of an interaction?

It’s to the credit of creator Luis Antonio and his team that this small apartment can have so many places to explore and variables to check. At just about every point of the game, I felt like I had just enough threads to still pull on, or methods to alter situations to my own advantage. Discovering how these narrative gears and cogs interlink is really fascinating, and though there are only a few big, gasping “ah-ha” moments, the way they’re doled out works well. One in particular is mostly left to the player to deduce in order to progress, and it served as a real stand-out during my time with the game. 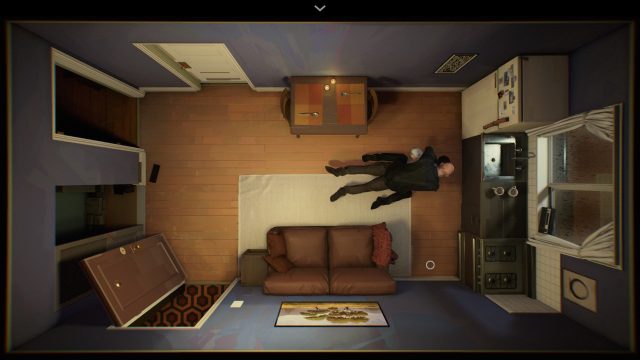 It’s hard to talk about the story without going too deep into reveals, but the tale Twelve Minutes tells did work well for me. It carefully toes the line between supernatural and ordinary. Its pacing is set to your own progression, and in retrospect, I didn’t have too much trouble figuring out ways of moving forward. And when things went wrong, I could usually identify a step where it fell apart, so I could clean that up in the next loop. The repetition can get old, though you’ll quickly discover methods of restarting the loop or getting directly back to key moments.

For me, personally, I felt the story ended strong, and with enough interesting wrinkles and twists to make it a narrative I won’t forget for quite a while. It also, however, entails working through some rough scenes, of both physical violence and emotional stress, and the resolution of the story might be a bit polarizing. Definitely be ready for some really tough-to-stomach moments. Twelve Minutes has a deep mystery to unravel, but it also presses you to consider what the consequences of unraveling it will be.

Both the writing and voice acting help make the moment-to-moment drama and intrigue feel real. The dialogue between characters feels honest and real, reflecting where they’re at and the ways in which they’re wrestling with whatever is happening right in front of you. The lineup is suitably star-studded, with James McAvoy playing the husband, Daisy Ridley the wife, and Willem Dafoe the intruder. 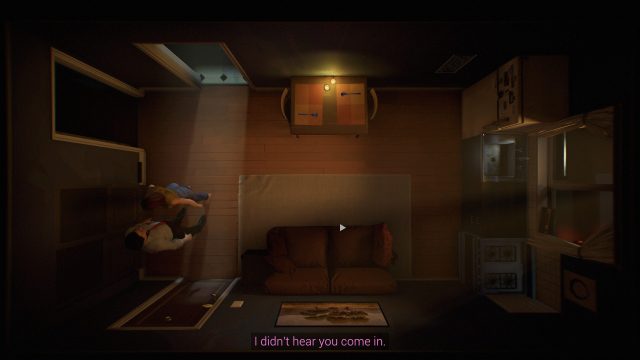 Each one delivers a believable performance, and throughout the story’s breadth they end up having to deliver a wide range of emotions, all of which come across well in video game form. Honestly, Twelve Minutes feels a bit like an interactive stage play in the moment-to-moment. It has the same focus on a core cast and their interpersonal drama that a small-scale play might, keeping the events narrowed in on a single apartment, a small stretch of time, and a set cast of characters. The ways in which their stories begin to overlap and truths come to light is fascinating, especially as you—the husband—start to tinker with more alterations and branches of what could happen.

Twelve Minutes runs into some issues with its dialogue at times, however. I frequently ran into moments where multiple dialogues were playing out at the same time, or jarring transitions from one conversation into another. Subtitles are an absolute must for playing, as otherwise it can get really hard to discern what’s being said, though the colored subtitles for each character helped a bit. But it can also get frustrating to miss a key detail or important tidbit because of clashing conversations.

There are also moments where Twelve Minutes can feel a bit sluggish, as characters have to turn to position themselves to interact with one another, or interrupt each other with time-sensitive dialogue, or even do some strange shimmies from one place to another. On PC, clicking out of the held-object view was sometimes finicky as well. It wasn’t ever game-breaking or even progress-halting, but it does break the tension of a scene when characters start acting very procedural and robotic, or start speaking lines over each other and interrupting rather than talking with a natural flow. 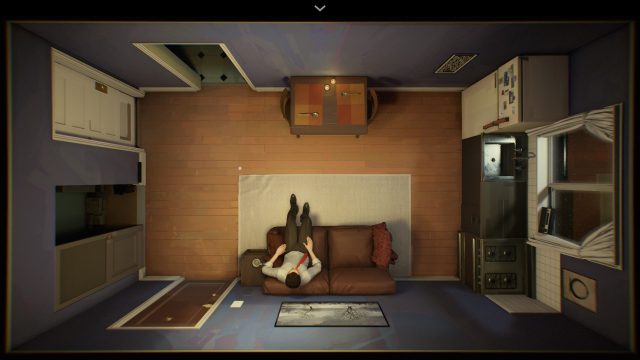 There have been a lot of time-loop games between when Twelve Minutes was first making the rounds and its launch now, and it’s nice to see that despite the years, it still feels like a fresh, interesting take on the concept. It’s honestly to Twelve Minutes‘ benefit that the time loop feels more like a conduit for its storytelling, rather than the main attraction. And there were even some extra little details and scenes I went back to uncover after the credits rolled too, a few “what-if’s” that I felt compelled to discover.

While the Groundhog Day repetition provides a setup for the player to explore all of their surroundings, discover hidden information, and ultimately resolve some long-running conflicts, the drama and tension between the cast is the heart of Twelve Minutes, as much as its time loop. It’s definitely on the short side, but that’s for the best too; it doesn’t feel like the story overstays its welcome, and for the most part, it wraps up everything fairly well by the end.

So with every repeated loop, and every new piece of info that leads to more narrative threads to pull on, Twelve Minutes is certainly fascinating to unravel. Some of it might start to feel a bit clunky, when dialogue starts mashing up against itself and characters move in awkward ways, but on the whole, it’s a puzzle I kept wanting to piece together, both fascinated and afraid of the answers I might find. It keeps the story driving forward, and if some deep, dark character drama set in a time loop sounds appealing, you’ll find what you’re looking for here.