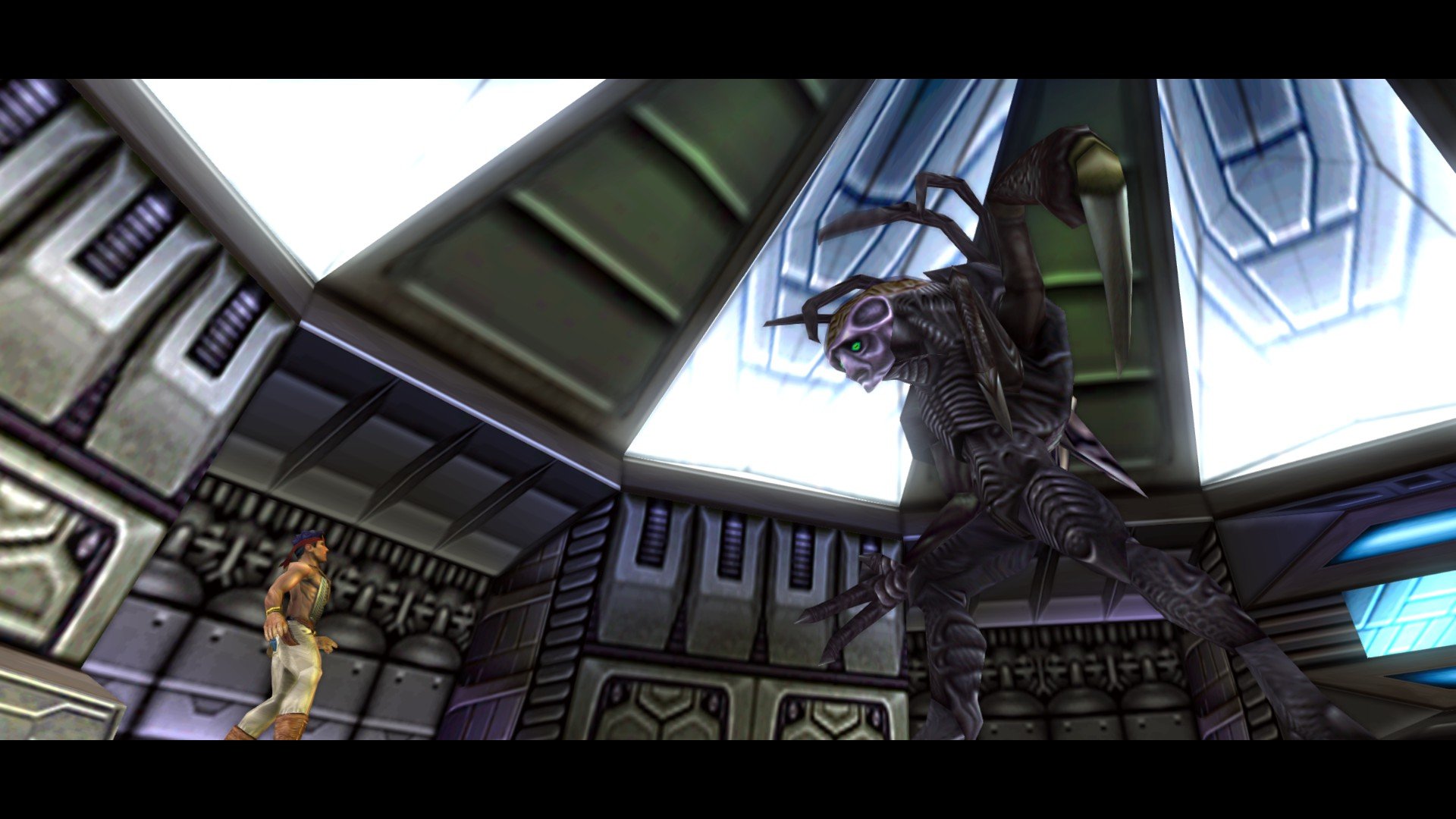 Turok 1 and 2 played a pretty big part of my childhood. While the first game mostly started the trend of crazy first-person shooters coming to the N64, Turok 2 added multiplayer support with some ridiculous levels and weapons to up the ante from the original. To say it dominated most of my life in the fourth grade isn’t an understatement.

I have a lot of fond memories of playing around with the absolutely amazing Cerebral Bore weapon, jumping about as a raptor, and utilizing various cheats to screw around in the campaign. Thing is, I don’t actually remember a lick of the single-player levels, despite spending more time with this sequel.

While this port by Night Dive Studios (still doing the Lord’s work) is excellent, I can’t say that Turok 2 holds up after all these years. 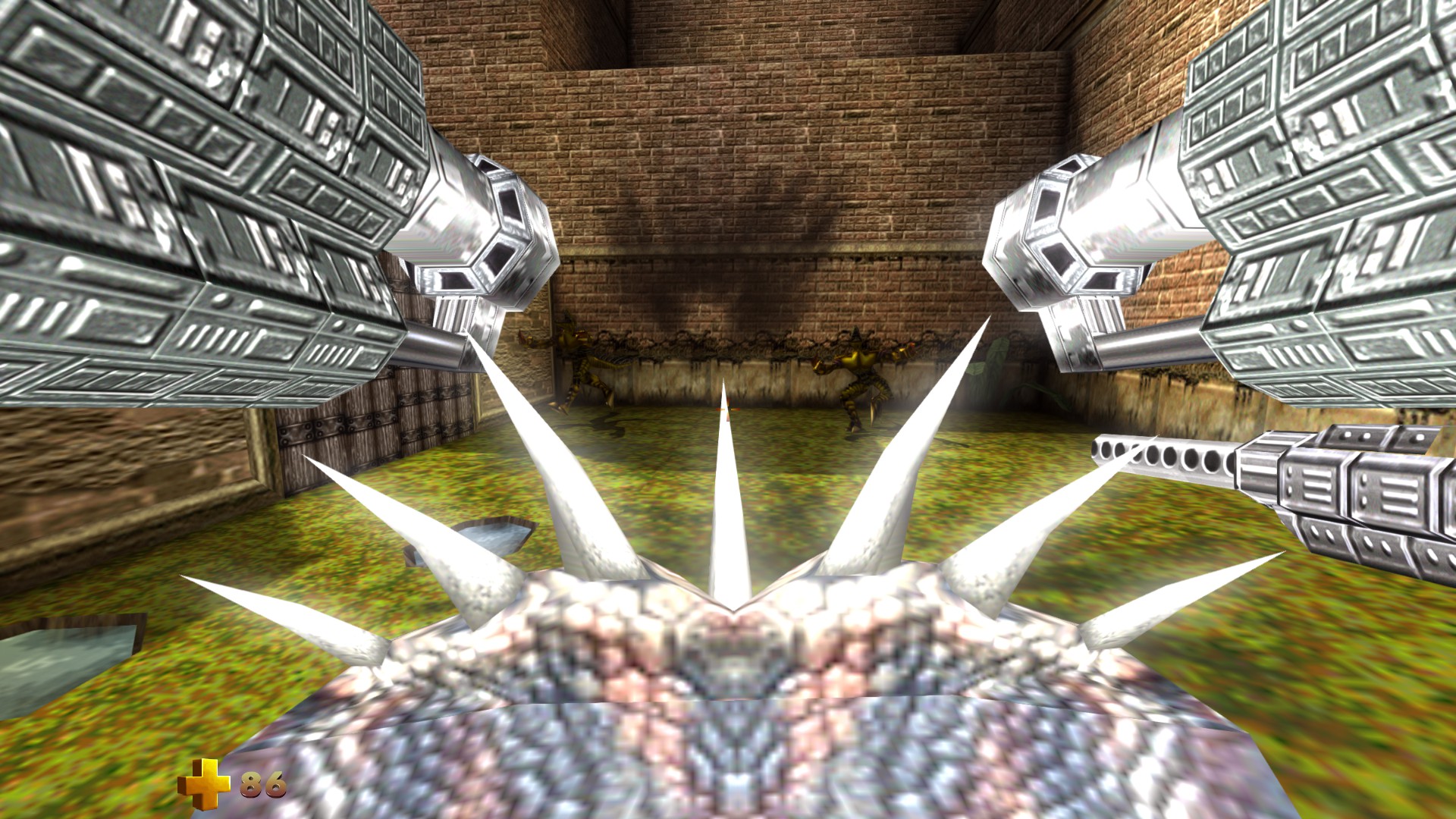 Unlike the original title, Turok 2 attempts to inject the series with more narrative focus. While there are definitely more cutscenes and people speaking to you, I never made heads or tails of the general plot. The game deals with an alien force known as the Primagen trying to eradicate all life on Earth, but then each of the six available levels has you battling a different race. I guess it’s cool to have themes, but this game really doesn’t explain much.

Whatever, though! I don’t need a reason to hunt dinosaurs! This is a shooter from the ‘90s, where exposition and narrative drive weren’t that important. Just throw me in a level, give me a crazy arsenal and some keys to find, and let me have at it! To that end, Turok 2 delivers, but the basic design of most of the campaign levels is all over the place.

The game starts in a harbor that has you shooting barrels before navigating a deliberately obtuse layout that does its best to hide important objectives. Since each level has a larger goal beyond finding keys, you can’t just plow forward until you reach the end and call it a day. Now you’ll have to contend with a lot of backtracking and path finding until you stumble upon objectives that seem oddly out of place (why am I saving children, for instance?).

I don’t mind having a bigger goal that sees me dismantling the efforts of the Primagen to impede their assault, but placing primary objectives behind hidden walls or well off the beaten path is just plain mean. What makes this doubly worse is that the later levels are actually fairly streamlined, as if the development team was coming to grips with how to design the game world at the start. After making you suffer through the nonsense of skipping a key and having no clear path back, the last few maps are so straightforward that it almost becomes insulting.

I cannot neglect to mention that some levels have keys specific to certain puzzles which you can use out of order. This happened to me during two different situations; I had ended up finding a key/ion core early in the level, missing one of the main objectives, and then using said key/ion core for a different room. This then bloated out my run time because I needed to comb every inch of the level to find what I skipped over.

A lot of level designs feel like a way to pad out the runtime of the game. Since there are only six levels in total, it’s hard not to think Iguana Entertainment was trying to trick players into being lost so that they would be stuck searching through bland-looking corridors for eternity. 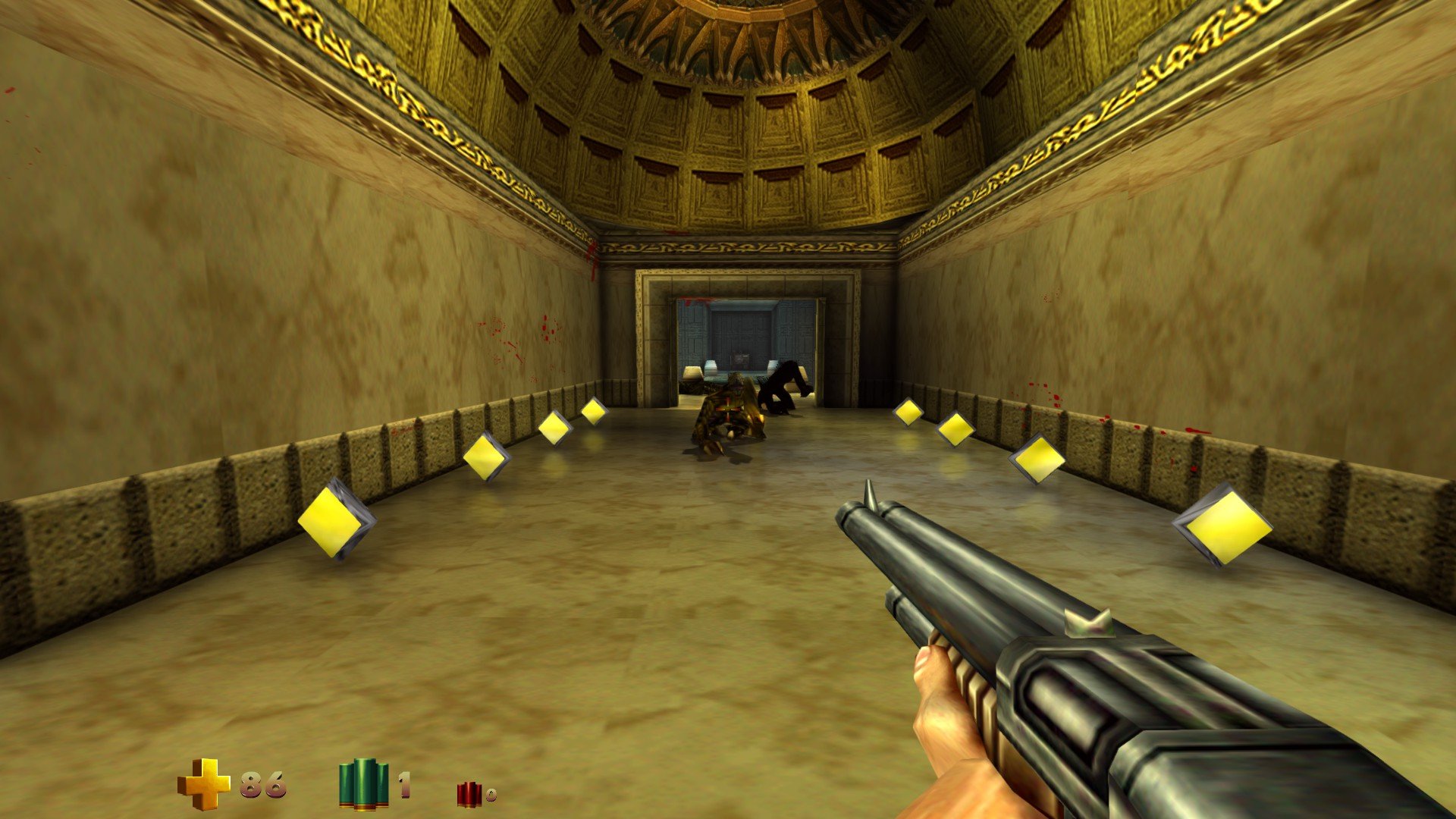 I really have to stress that bland part, too, because I was taken aback by how little distinction there is with the graphics. I understand that this was originally an N64 title, so memory was limited, but there are hardly any landmarks in these levels to help you find your bearings. All the walls seemingly look the same for each specific level and it becomes a nightmare if you miss anything to try and find it again.

Just like the first title, the final “boss” is hidden by making you collect a bunch of extra crap. I like that the main character has access to powers, but this just goes back to the argument I made about padding out the game length. You have to find feathers that are hidden in each level and bring those to a warp portal, though you also need to find a switch to open said portal. These powers are necessary for getting the “Primagen Keys” in each level, but most levels require you to find the power-up from the successive level and come back. This leads to more backtracking and getting lost in generic level designs and my god do I want to punch something.

A few checkpoint portals per level do help a bit with navigating (since you can warp between them), as does the godsend of quicksaving that was included with this port, but the main campaign of Turok 2 feels oddly bloated for such a small map count. At least the weaponry and general gunplay feel incredible and well beyond the original title. 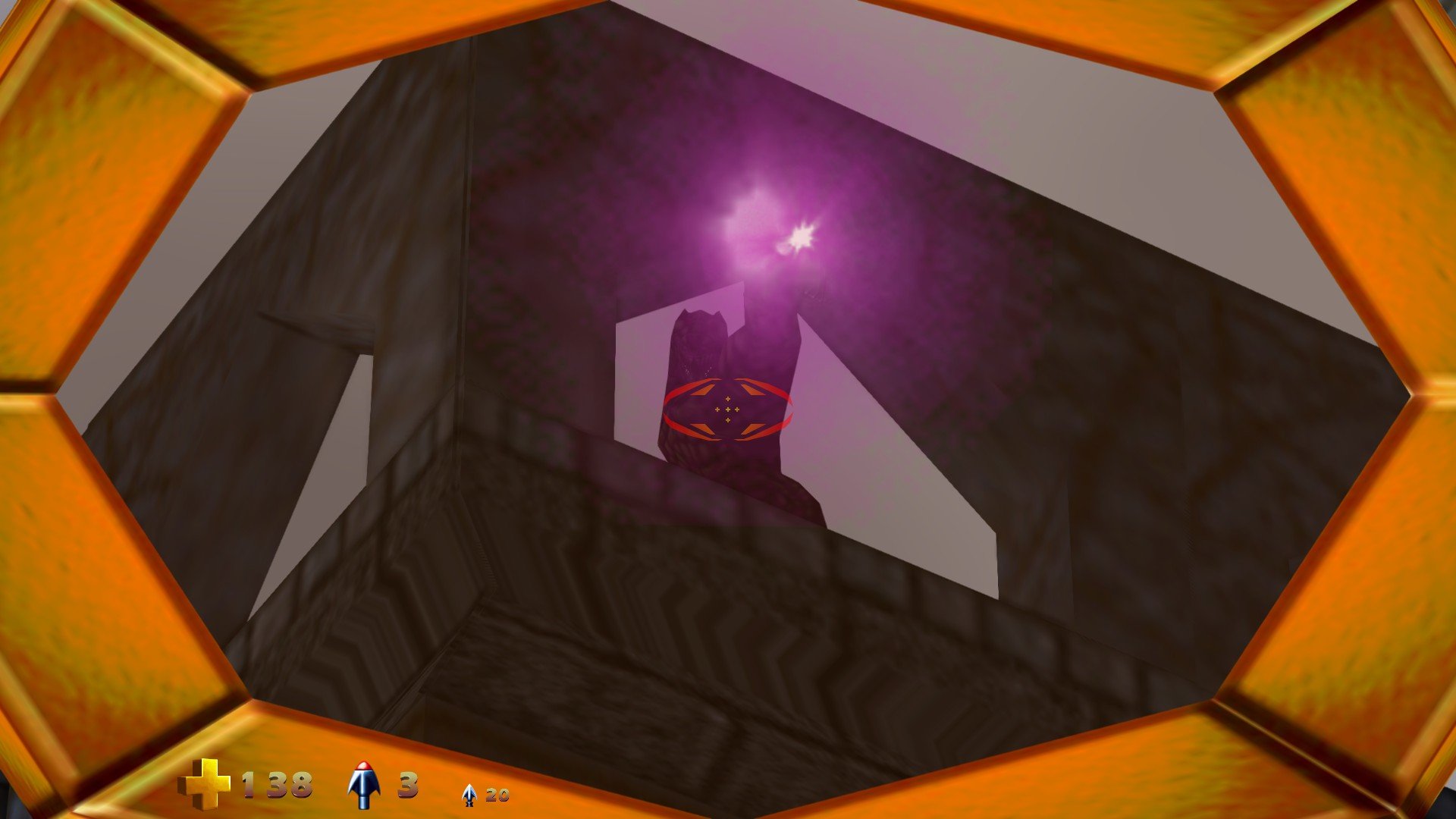 While I’m not sure there is any reason to have such a large weapon count (most of the guns are upgraded versions of previous weapons), there are a bunch of fiendishly creative guns to dispatch your foes with. The Cerebral Bore is the obvious standout as it launches a dart that burrows into your enemy’s brain and sucks out the blood in a display that would make Quentin Tarantino blush. Things like the sniper scope enabled bow and hidden nuke are also awesome, especially since the scope display is one of the best ever put into a first-person shooter.

This would all be for naught if there wasn’t a multiplayer component (seeing as how I didn’t dig the campaign), but even the original development team saw that adding competitive play was a smart decision after the success of GoldenEye on the N64. To that end, this new port retains the multiplayer and features fully functional online play with all of the maps from the N64 and PC versions.

Reliving the amazing “H2 Whoa!” and experiencing it in fullscreen (for once) is a trip, but I didn’t get a lot of extensive testing with the online options. It is nice that there are dedicated servers as well as LAN support, but literally no one is playing this game online. I like that the Steam version (which I tested) can interact with the GOG version, but even that yielded nothing for me to connect to. Thankfully split-screen play is present, though a little complicated to find in the menus. At least it compliments the nostalgia trip this port offers. 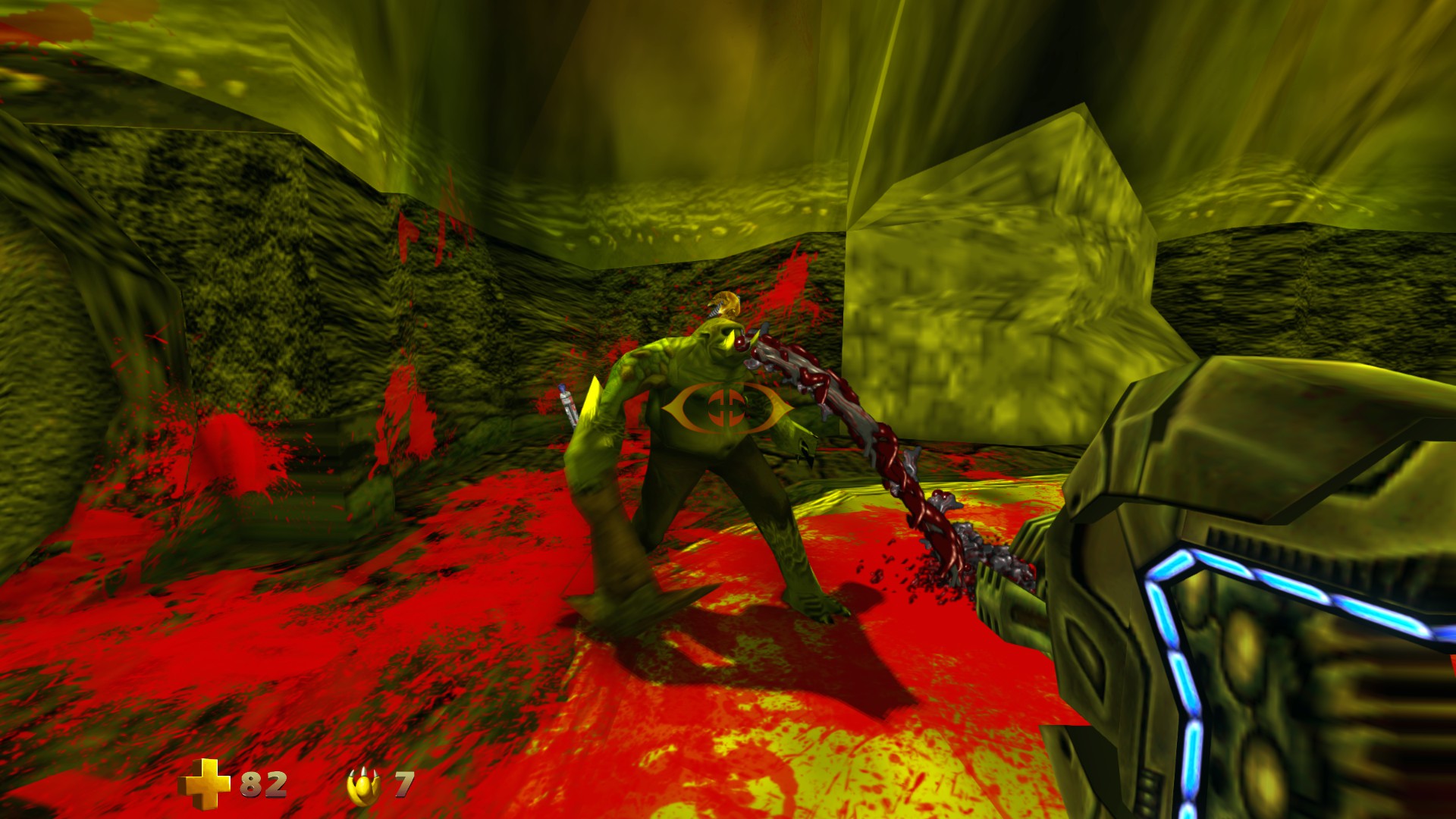 As for how this port handles, I’m not sure I can give enough praise to Night Dive Studios. There is an extensive list of graphical options that you can tweak as well as the ability to swap between the N64 and PC variants of the soundtrack. Quicksaves are a welcomed improvement, the ability to unlock the draw distance is very much appreciated, and even an option for speeding up level warp times is incredible.

You can also display the game at 4K, though I wouldn’t recommend looking at this title with such a clean display. The textures look rough even at 1080p. That being said, widescreen is properly implemented and the HUD has been redrawn, so it doesn’t look abysmal on modern displays. The game also runs pretty damn flawlessly, save for a few micro-stutters in spots.

I am a bit confused as to why some of the audio wasn’t fixed for this port. Maybe Night Dive was trying to fully replicate the classic experience, but the cutscene after you die and get respawned is noticeably silent. The voice mixing is also off, with the soundtrack being quite a bit louder than the spoken dialog. Those problems aside, this remaster is a solid conversion. 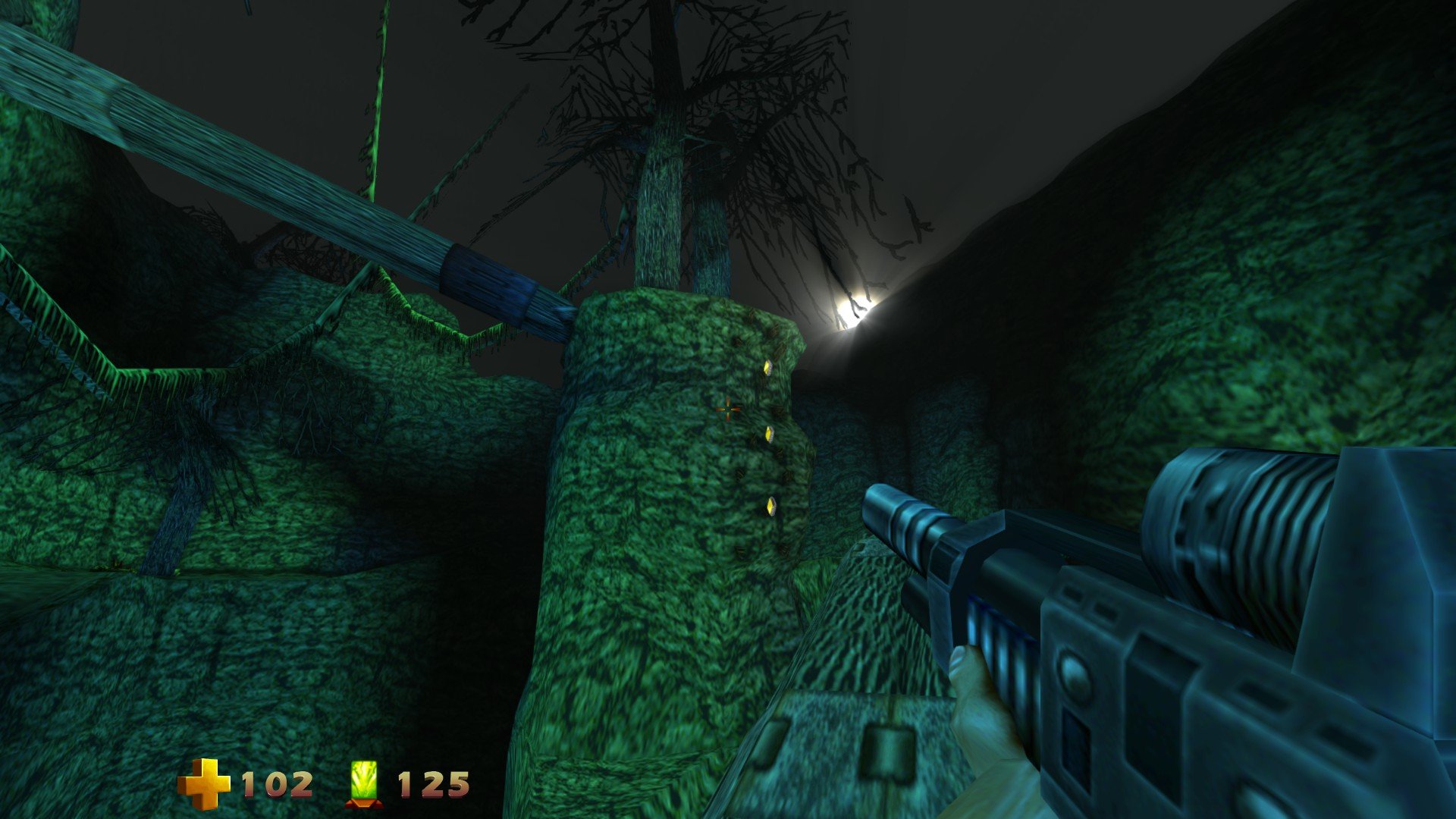 Sadly, I’m just not as big a fan of Turok 2 as I remember myself being. After having replayed the game (and finding every secret area), I’m pretty sure the reason my childhood memories are limited to multiplayer is because the campaign in Turok 2 is just not that good. In attempting to go for a bigger and better action element, Iguana Entertainment bit off more than they could chew and the end result is a bloated mess of a single-player component.

Were it not for the successful conversion of the multiplayer mode for this port, I would have rated this game lower. Even without an active player base, though, the prospect of getting friends involved for a night of classic fragging is really tantalizing. Hopefully more people get this in the future, because letting these crazy weapons go to waste is a damn shame.