I’m of the opinion that no era of video games is really better than the rest. You’ll find some argue that it peaked around the 16-bit era and others who insist that video games get better and better. My thoughts on this are that certain aspects of design have fallen out of fashion as the market has diversified. However, that only makes them different; not worse.

One such aspect of design that has changed is leaving it up to the player to plumb a game for its secrets. Think The Legend of Zelda, which was packed with secrets both optional and required for you to complete the game. The sub-genre that sprung up around Metroid was very much about chipping away through exploration, and not all of it was communicated in an obvious manner. Sometimes, sometimes you had to crack open the instruction manual to discover information that the game itself wasn’t going to tell you. Castlevania never told you that you have to hold Up and press the B button to throw your secondary weapon.

Tunic doesn’t just include this antiquated slice of design, it’s actually about it. Forget that it looks like Zelda and plays like Dark Souls, what it really is underneath is a celebration of long-forgotten design practices. You wake up on the beach as an unnamed fox wearing, appropriately, a tunic. Not much of anything is given to you at the offset. Who you are, what your goal is, even what you should be doing at that moment is a mystery. Left to wander, you start accumulating gear and, appropriately, pages of an instruction manual.

The instruction manual is essential for more than just learning the controls. The game’s text is almost entirely in an illegible script. Get used to that, because there’s no magical codex that will clarify it for you. Instead, you’ll glean most of your information from the illustrations and the short snippets of text in your language. Immediately, this is useful because picking up an item won’t reveal its purpose, but perusing through the manual might shed some light on things.

Tunic is locked at an isometric angle, which it uses to obscure things in the environment. Secret passages might be hidden in little nooks in the environment, and finding them may call for the old practice of grinding against the wall and seeing what gives out.

That’s only the surface, however. The puzzles in the game keep ramping up in difficulty, building towards one climactic headscratcher. It’s not just about finding how to reach the treasure chest on the ledge; you’ll eventually have to get those neurons firing.

Impressively, Tunic manages to pull this off without being overly cryptic. The fact that the world is densely packed with puzzles and secrets reminds me greatly of La-Mulana, but without being so obtuse or punishing. Tunic is like a La-Mulana that doesn’t hate you.

Beyond the puzzles, however, is a combat and exploration system that is greatly reminiscent of Dark Souls. Between the dodging, blocking, and sucking back potions to grow your nipples back, it’s hard not to see the influence. Indeed, the world design shares many similarities, as well. A lot of the narrative is told through the environment rather than dialogue, and despite the maps that unfold in your instruction manual, it’s up to you to figure out where you should be going and when. Also similar to Dark Souls, the world of Tunic is one that is largely devoid of life. This initially struck me as disappointing, since the visuals remind of The Legend of Zelda: A Link to the Past. One of my favorite parts of that classic title is its calm world that seems to teeter on the edge of safety. Tunic’s world, on the other hand, has long since plunged from the precipice and shattered on the ground.

It flirts with themes about the cost of being a hero the same way that, say, Dark Souls does. You’re not going to get through unscathed, but being the hero you are, you’ll no doubt push through to the end. Games like EarthBound, Cave Story, and Undertale touch the same themes. Like its influences, Tunic is also a game that’s bright and cute on the surface while presenting darker undertones. Those bleaker aspects stay out of the way if you want them to, as the story is extremely minimalistic. 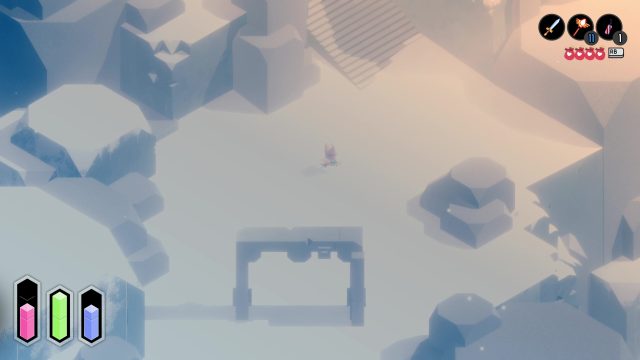 Tunic is one of those games where it feels like there’s no end to its secrets. One of its many puzzles requires you to translate the compass directions from the game’s script, and it can make you wonder if the rest of the text can be demystified. In the months to come, will players pull out all the secrets hidden in the instruction manual?

And better yet, like La-Mulana, solving some of the harder puzzles has a way of making you feel like the smartest person on the planet. Unraveling the game’s final riddle felt like a huge, monumental moment. I immediately turned my notebook towards my husband and explained the process of unraveling it. I did this all without a guide. This was my victory. As for Tunic’s victory, where does one start? The way it masterfully mixes its influences into an experience that feels wholly its own? How it tells a story in an interactive medium without words? The way it trusts the player to figure things out? What about its aesthetic, its bright, vibrant graphics, and relaxing soundtrack?

What’s amazing about Tunic is that I can’t count any misstep. I fell into the world a few times, big deal. The penalty for death is paltry and they’re bugs that can be squashed. Once, a sound queue got stuck playing continuously, and I found myself pondering its significance in futility. I only noticed it wasn’t supposed to be happening when it continued through to the main menu. Sometimes things get in the way of the camera. There was nothing major enough to drag down the experience.

I don’t really care about any of that, because Tunic stroked my ego from start to finish. I frequently found myself muttering, “you devious bastard.” It speaks the language of games gone by while injecting both modernity and its own personal twist. It’s brilliant enough to stand apart, and this is one garment I recommend you slip into. Maybe with some leggings. It would look nice!