Every once in a while, a game comes along that takes you completely by surprise. I noticed a lot of people talking about Undertale recently, and how great it was. The screenshots looked a little underwhelming, but I decided to give it a whirl anyway. I was definitely not prepared for just how much I was going to fall in love with this game.

I’ve seen people compare Undertale to EarthBound, and it’s a very apt comparison. It’s an RPG with a similarly fantastic sense of humor, in everything from the character dialogue, battle text, item descriptions, and spritework. It’s endlessly charming, and it’s nearly impossible not to crack a smile while playing.

I’d also offer up a comparison to Cave Story. Not only because it takes place underground and has a similar name, but also in the way it handles characters, storytelling, and tone. Everything may seem cute and pleasant at first, but as soon as one thing goes wrong and secrets begin to be uncovered, there’s no telling who to trust or what might happen. And also, let’s face it, Toriel is basically a Mimiga. 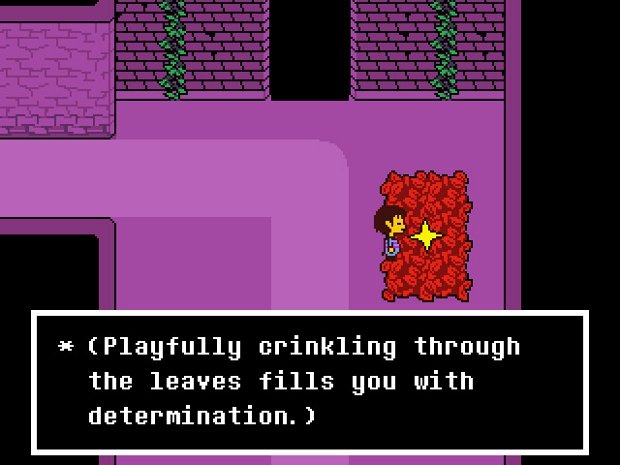 Undertale is the story of a human child who falls into a deep underground cavern filled with monsters and must find a way to escape back to the surface. The monsters had all been banished there by the humans long ago, so tensions are high whenever a human drops in to visit. The player quickly meets two monsters, a flower named Flowey and a motherly cow/rabbit monster named Toriel. They seem nice enough, but they are monsters after all, so should they really be trusted?

The journey through the caves is filled with puzzles, turn-based random encounters, and a whole lot of humor. The outstanding gameplay mechanic here, though, is combat. It’s a unique system, and even though encounters are random, they don’t occur often enough to become an annoyance. In fact, I usually found myself looking forward to my next encounter.

The turn-based combat in Undertale works very differently from most other RPGs. While attacking or defending, a box will appear with a short mini-game to complete in order to determine the amount of damage given or received. Attack mini-games involve stopping a moving bar along a slider at the perfect moment for maximum damage. The majority of defense mini-games play out a bit like a bullet hell; enemies will usually send out a volley of projectiles, and the player must move their heart around to avoid getting hit by anything. Bosses each have their own slight alterations to the defense mechanics, and the game does a good job of changing things up from time to time so that it’s not always strictly bullet hells.

Attacking is not the only option, however. There are two other choices, Act and Mercy, which will provide much of the core combat gameplay for many players. The Act option offers several ways to interact with the enemy, which change depending on which monster is being fought. These can range from friendly actions such as “Compliment” or “Hug” to meaner things such as “Pick On” or “Ignore.” Choose the wrong interaction and the monster might become more aggressive. Choose the correct interaction and the monster might become happier or no longer wish to fight. When this happens, the Mercy function opens up and the fight can be ended non-violently. I honestly enjoyed trying out every possible option anyway, even if I already knew what to do, just to see how the monsters would react.

Basically, it’s the player’s choice whether to destroy the monsters or show them mercy. Killing monsters grants money and XP which can raise the human’s LV. Sparing monsters is only rewarded with money (and perhaps a new friend). It’s entirely possible to play through the entire game without killing anything and remain at LV 1, and it’s also possible to kill everything. But keep in mind that every decision has consequences. 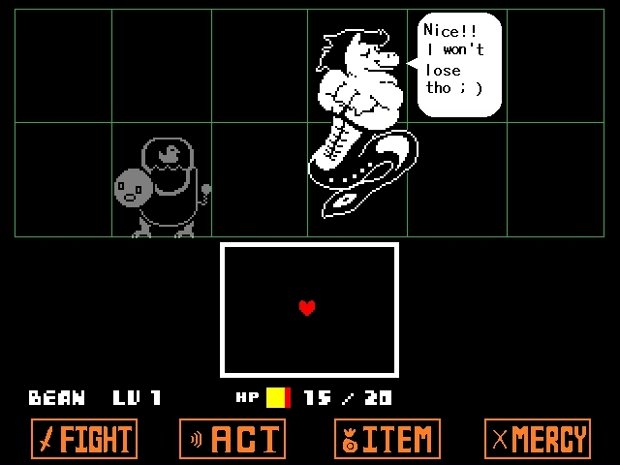 Aside from combat, there are also puzzles to be solved in order to navigate the caverns, but for the most part these are very light. I can’t imagine many players will get stuck on any of the puzzles, and actually some of them are solved by the monsters themselves because they doubt the human’s abilities. The puzzles aren’t particularly impressive, but they’re used more as a way to keep things interesting as the player is exploring rather than trying to stump them.

One of Undertale‘s greatest strengths is its wonderful cast of characters and its extremely witty sense of humor. While the main character is sort of a gender-neutral blank slate for the player to inhabit, the monsters are anything but. I quickly fell in love with just about every character I came across, even some of the common enemies, since it’s possible to have conversations with them during battle. Everyone in Undertale is so memorable and interesting, I just wanted to hug them all (and I did hug some of them!).

The humor is spot-on as well. I haven’t laughed out loud this consistently during a game since EarthBound. Between listening to a long conversation of terrible skeleton puns, having a flexing contest with a muscle-headed merhorse, cooking and eating a cup of instant noodles in the midst of battle, finding out how item names like Butterscotch Pie or Spider Donut are abbreviated, and hundreds of other hilarious moments, my face was starting to hurt from smiling and laughing so much. 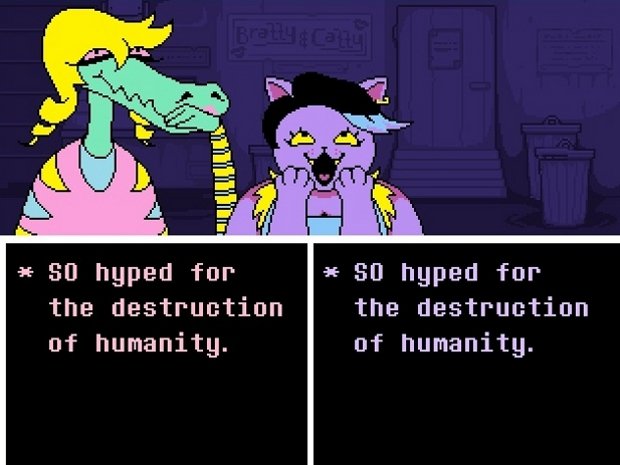 The thing that really hooked me, sealing the deal for Undertale being such a phenomenal game, was how it deals with player choices. I don’t want to spoil much in this regard, but there are multiple endings as well as many moments and lines of dialogue which can be altered depending on the player’s actions, and some of the things the game remembered seriously surprised me.

It’s really difficult to talk about what makes Undertale so great without spoiling anything, but if the concept sounds interesting to you at all, I highly recommend checking it out. Don’t let the somewhat plain-looking graphics turn you off, because the game more than makes up for that through its superb gameplay, characters, and writing (not to mention the excellent soundtrack!). And actually, many areas, objects, and characters are surprisingly beautiful and well-drawn, so even the lackluster art style started to grow on me after a while.

Undertale provided me with many hours of laughter, happiness, and warm, fuzzy feelings, all the while surprising me with some truly sad and shocking moments out of the blue. It’s the kind of game that I’ll want to replay many times in order to see how all of the various choices play out, and I’m sure I will remember it fondly for years to come. I hope everyone else can find as much joy from playing Undertale as I have!