It’s good to be the king

City and civilization games on consoles are a rare thing. I’m not exactly sure why that is, but my guess would be that traditionally, these games only enjoy their moderate success on PC.

Whether it be the limitations of consoles themselves or the unwillingness to bring this genre over for fear of a lack of audience, those barriers are slowly withering away. This is evident in Tropico 5, which recently released on the PlayStation 4.

Just as deep and rich an experience as any simulation on the PC, Tropico 5 scratches an itch that a lot of console loyalists have been afflicted with for some time. 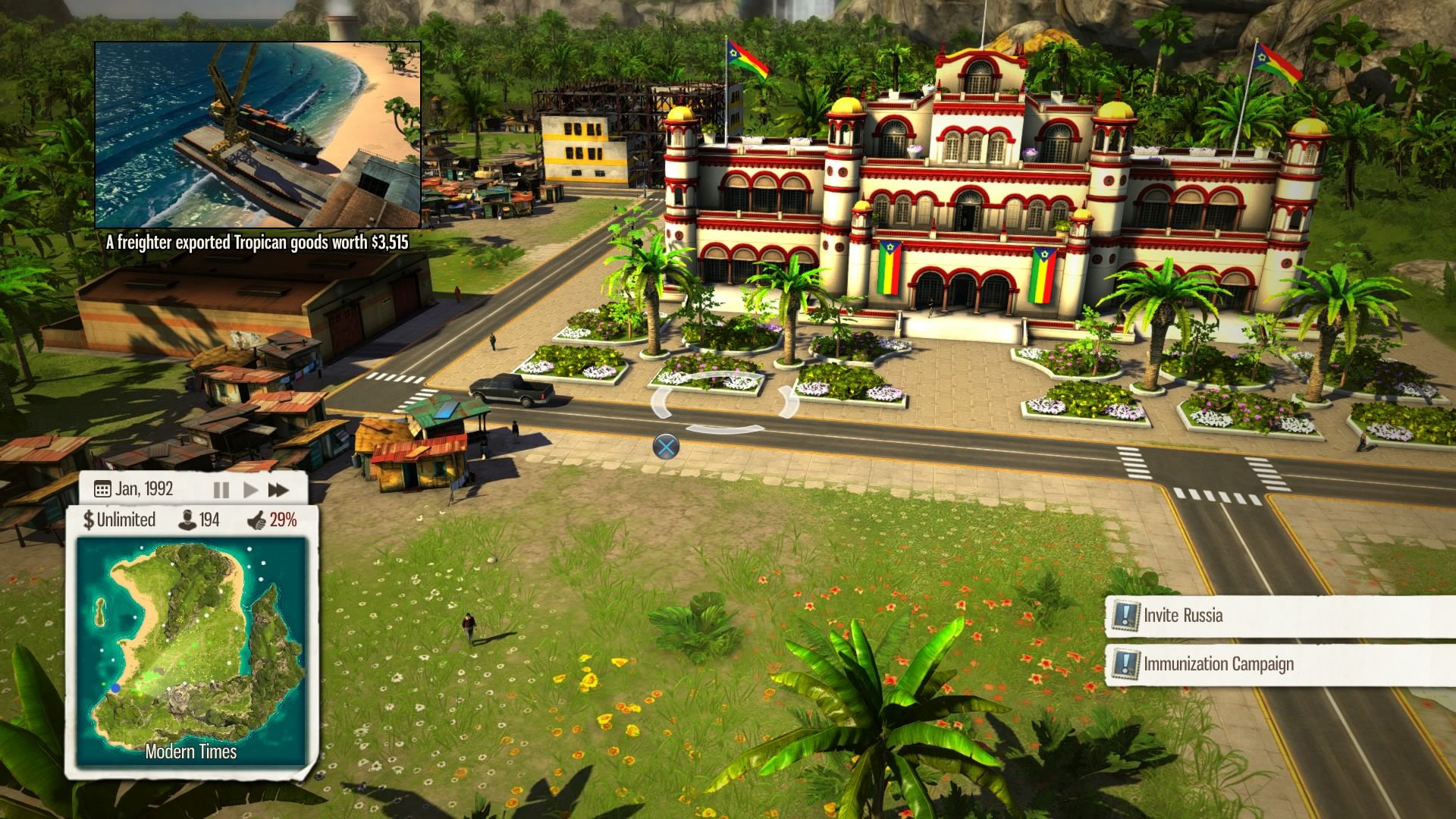 Tropico 5 is a learning experience. How you choose to learn is completely up to you. There is a mission and campaign mode that will certainly steer you in the right direction, but that didn’t appeal to me and I suspect most will want to do more than that as well.

As a Civ junkie, I don’t like to be limited with my creations — in that, when a specific mission ends, so does your island. For me, sandbox mode is where I spent most of my time and where I would imagine most players will. 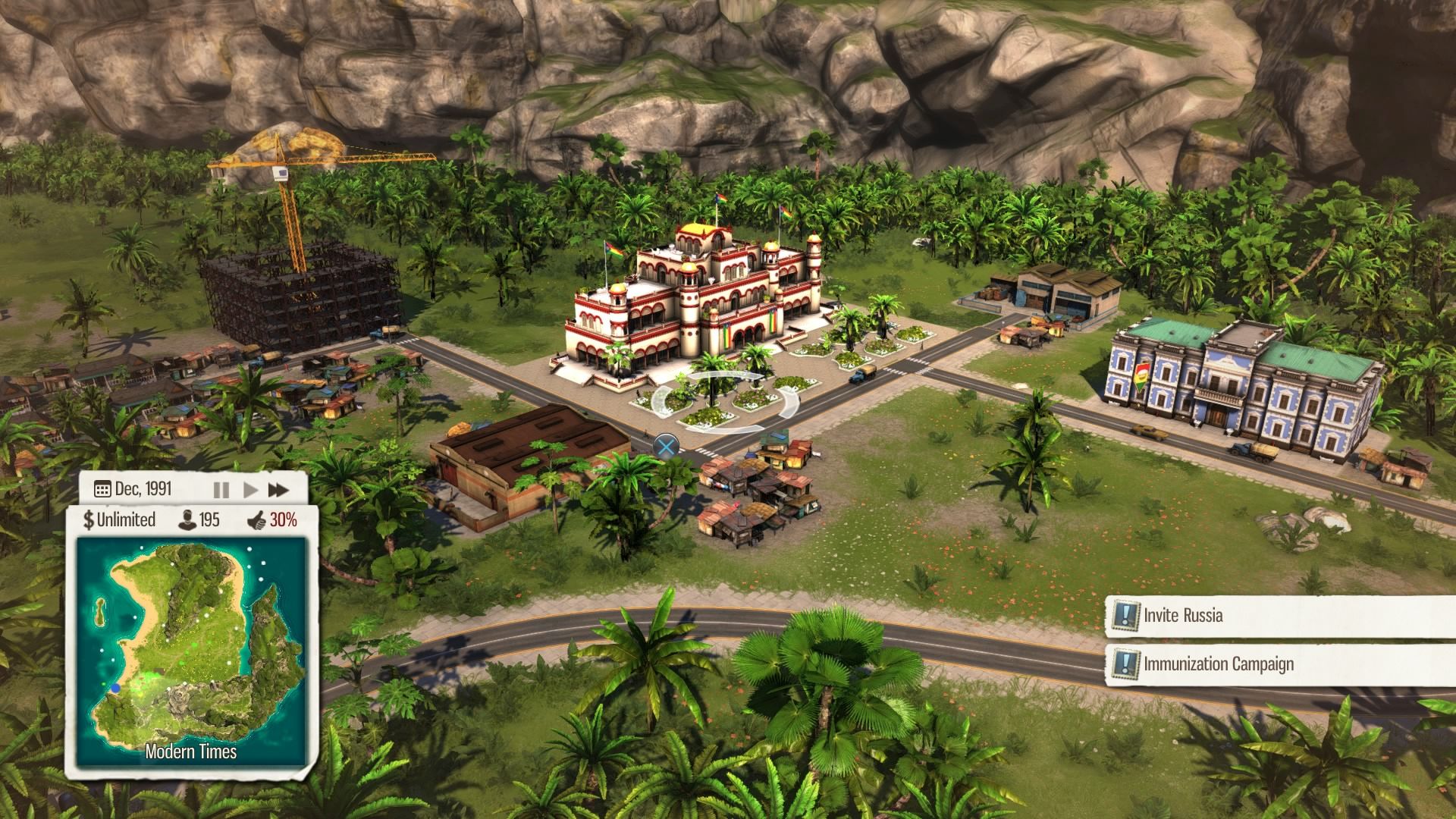 Sandbox is the true meat and substance within Tropico 5. Not only can you set your win conditions, but you can choose between multiple economic and political difficulty levels, starting era, the money initially available (unlimited is also an option) and the number of citizens that start on your island.

But probably even more critical to your island’s success is the land itself. While you will have plenty of pre-made islands to choose from, there is also a map generator that offers endless combinations of whatever creation you want — for example, you can choose between different sized-islands and the amount of resources available.

Even if you skip much of the campaign, you will still be able to learn as you go. Within the game itself is a sort of quest function where specific tasks will need to be completed. Whether it be to build a library or extra military buildings, the game does an excellent job of teaching while doing. 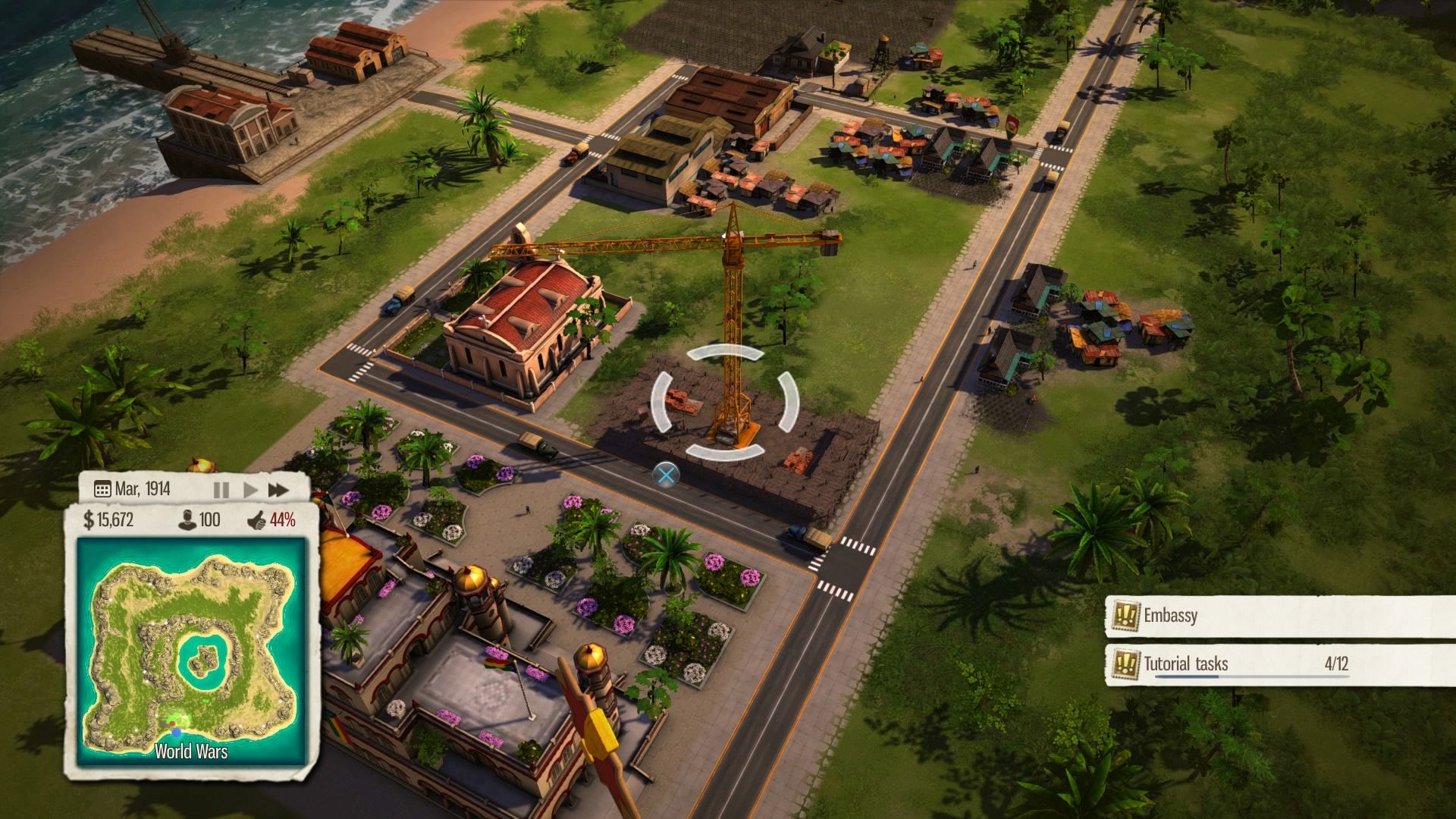 For someone like me who hates to read directions or endless strategy guides (preferring to figure stuff out on my own), this is a perfect implementation.

But it’s not just the quests that will guide you. The detailed faction and happiness statistics will help you be the leader you want to be. There are various factions all vying for greatness and it’s your job as leader to finely balance what you want for your island and what your people actually want and need.

To help you lead, there is a dynasty system where you can name and set specific management roles to created characters that will give bonuses to buildings based on their specific abilities — there are generic managers, but you can’t level those up like you can dynasty members.

These dynasty members are part of El Presidente’s extended family and can benefit you greatly within the game. Ignoring them or their abilities will only make your leadership that much more challenging.

Of course, it’s not just your island you have to worry about. Tropico 5 is also a nation builder. Within it, you’ll have to juggle the trade of exports and imports and appeasing the Russians while at the same time not pissing off the Americans. As time moves on from the Colonial Era to the Modern Era, you will have even more nations and scenarios to deal with. 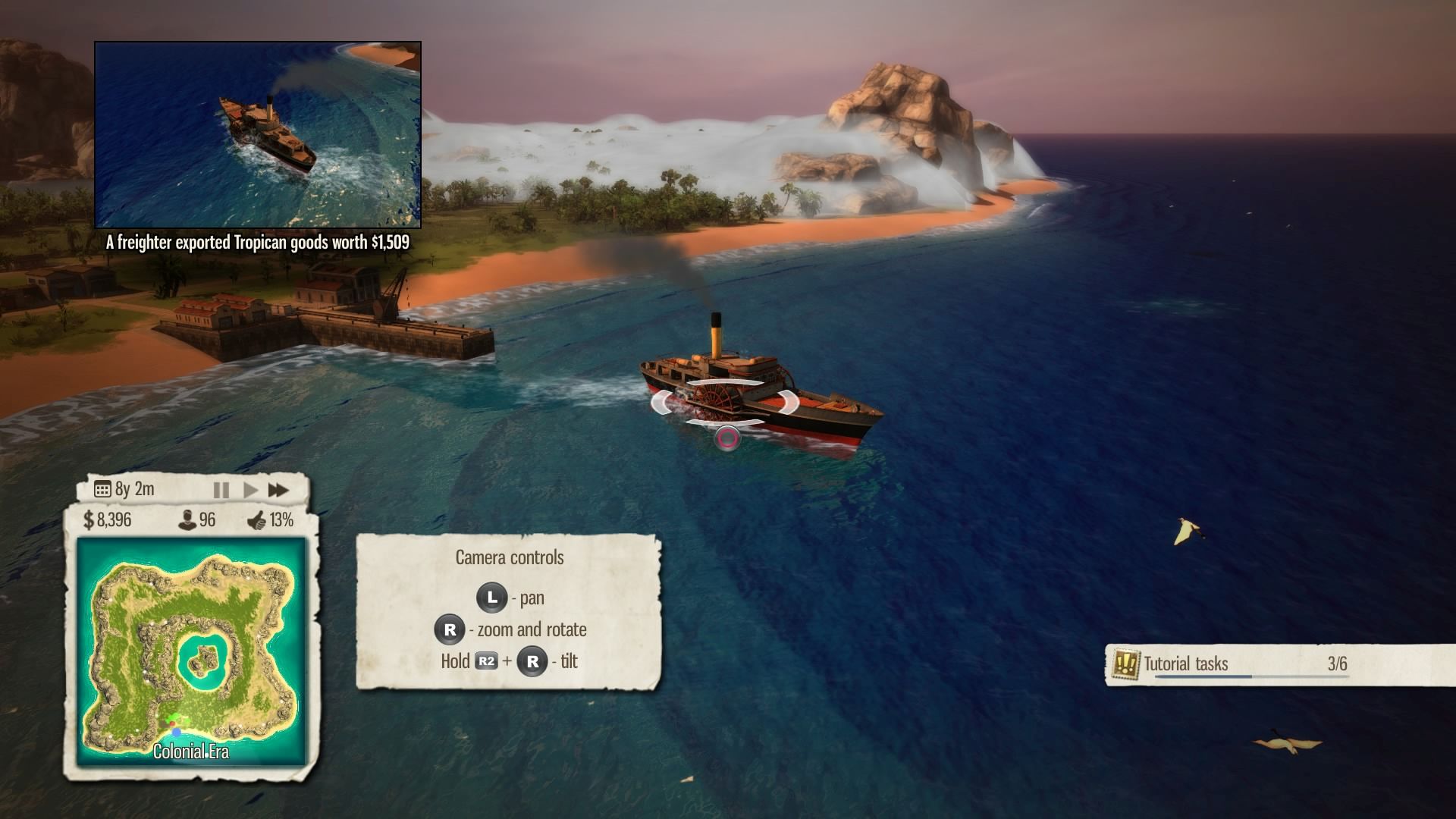 There are many situations in your virtual island experience that feel like they mirror how a real nation and leader needs to function. Tropico 5 is a constant balancing act and a game filled with trial and error.

You should be warned, if you find yourself to be a Civ addict, then you will quickly find that Tropico 5 offers the same kind of grab. Hours melt away. As you complete one task, something else comes up that you feel drastically needs your attention. The amount of management, while it can seem overwhelming, is really the draw and appeal of the game.

There is a multiplayer component, but really, unless you want to build an island with a friend or desperately want to compete against others, you probably aren’t going to bother. It works, so that’s all most players can really ask for when it comes to multiplayer within nation builders. 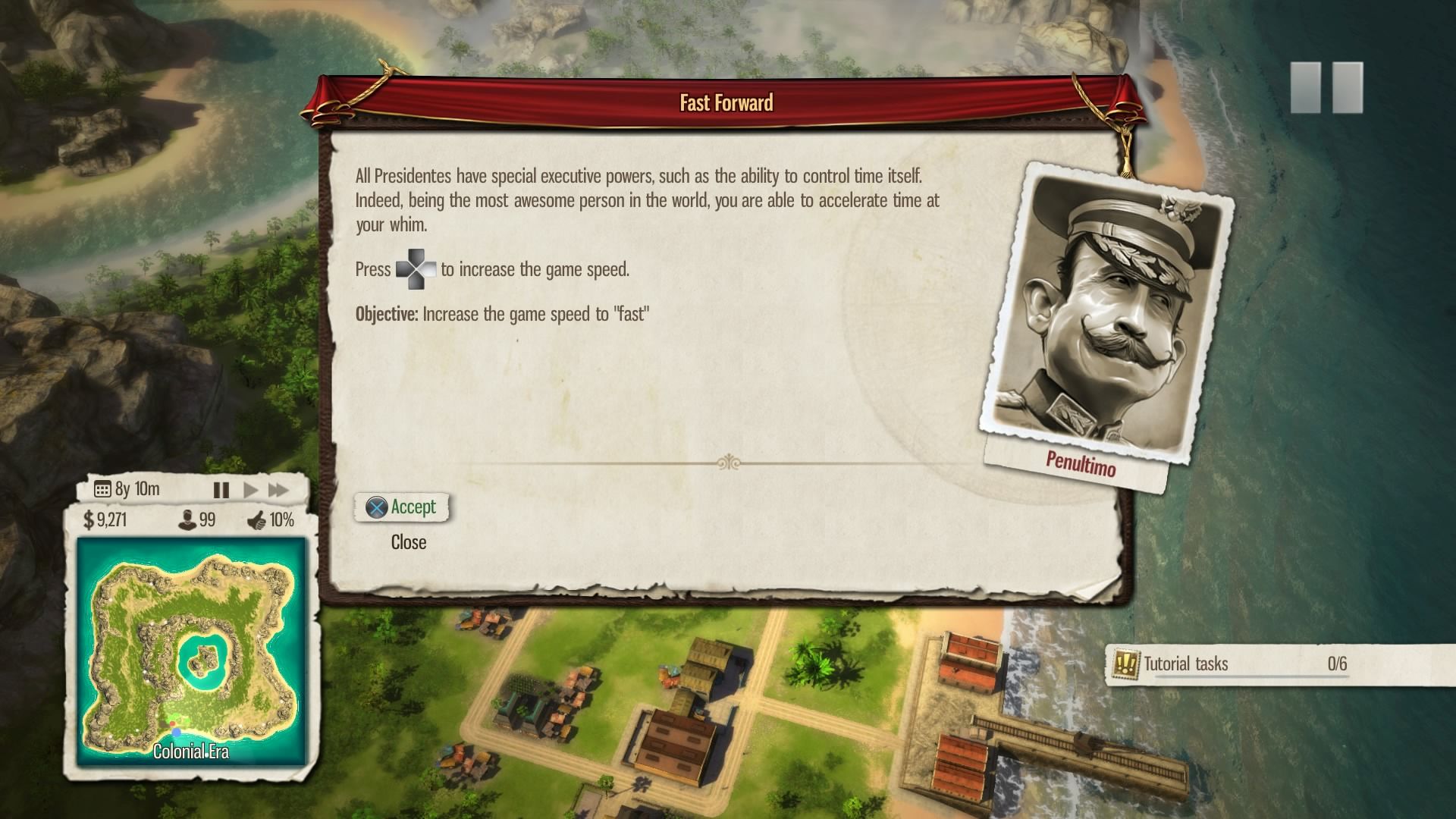 The game is not without its minor faults or seemingly-impossible challenges.

While I do keep the pace of time in its most forward position, it never felt like I could appease or completely stop rebel attacks or uprisings. These occur when citizens are unhappy or you have specific constitution options active, but no matter what, I found myself dealing with this constant nuisance.

Also, there were occasional save issues. In fairness, I played the majority of my time with Spotify running in the background, so whether or not that sometimes caused games not to be saved, I don’t know. It doesn’t happen often, but it can be devastating if you’re not paying attention and haven’t saved in a while.

Even though there were no real issues with the controls themselves, perfectly placing roads can take some getting used to, but it doesn’t strongly detract from the game.

While Tropico 5 isn’t the game-of-the-year masterpiece of a generation, it’s a more-than serviceable sim and strategy title that can satisfy a grossly under-served genre within the console community. If you love SimCity and Civilization and are dying for something similar on your PS4, then there really is no reason not to have and enjoy this game to its fullest extent.