We are at the doorstep of a new generation of games. The free-to-play market is doing its best to shake the stigma frequently associated with its business model. These new free-to-play titles have no barrier to entry, and they’re actually good! One of the handful of developers pushing this movement is Hi-Rez Studios with Tribes: Ascend.

Tribes: Ascend is considered to be the successor to Tribes 2, which came out over a decade ago. Thankfully, this new foray into the universe does a great job of bringing the jetpacking, multiplayer-only, first-person shooter up to speed. About 200k/h, to be precise. 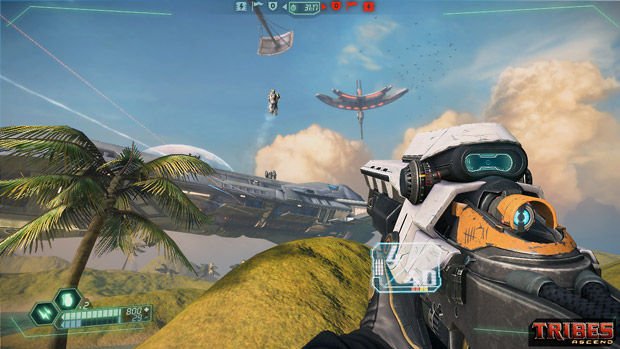 Tribes: Ascend claims to be the fastest shooter available, something that becomes highly evident to both spectators and players alike after only a few short moments of gameplay. The main mechanic is “skiing,” which allows frictionless movement across the game’s terrain. Holding the spacebar will allow you to ski, but without any actual momentum, you won’t go very fast.

This is where the jetpack comes in. The jetpack is your main source of vertical movement, but it’s limited by the amount of Energy your character class has. Ideally, skiing down big hills and letting gravity do all the work will conserve the Energy needed to burst uphill using the jetpack, allowing the player to fly smoothly around the map at incredible speeds. Once mastered, you can begin to use explosives to boost yourself to even higher speeds.

Having a good grip on this movement mechanic is required if you want to stay at the top of the scoreboard. By moving slowly, you’re almost guaranteed a quick death. There’s a jump button, I think, but if you’re using that instead of your jetpack then you’re not doing it right. Movement is the most unique aspect of Tribes: Ascend and will take some time to get used to. An in-game tutorial introduces the basics of how skiing works, while a skiing mini-game allows you to really test your skills. Once you get the hang of it, skiing gives you an incredibly natural and smooth feeling that is just about unmatched by any other title.

The free-to-play model allows you to jump straight into Tribes: Ascend and start playing immediately, though a ton of things remain for you to unlock. You are given three free character class loadouts out of a possible nine. The amount of diversity among these three classes, specifically when it comes to weight, allows you to experiment and discover your preferred play style. Each weight class has a different level of maneuverability, so don’t expect to be the fastest skier while playing as the Doombringer.

Each class allows for a lot of customization, though you’ll have to unlock more weapons and items in order to really start personalizing your classes. While playing the game, you’ll earn XP depending on what accomplishments you achieve in a match. Unlocking the classes themselves is rather cheap, which is great since you won’t be set too far back in currency by unlocking a class that you don’t jive with. So far, each item that affects gameplay can be unlocked without spending any real money, requiring only XP. To expedite the process, however, real cash can be spent to buy Gold within the game, which can then be used to unlock various items.

While everything can be obtained through XP only, some items will take for-ev-er to unlock this way. The most expensive items right now cost 100,000 XP to unlock. At a casual rate of play, this could take weeks to accomplish and may even feel like a grind. If you were to purchase $10 worth of Gold, that weapon could be yours instantly. Most of these weapons aren’t necessarily better, but offer a different — and sometimes easier — way to play the class.

It’s a shame that most of the starting weapons for the classes aren’t explosive weapons, as these are much easier to use for newer players. There are plenty of weapons with an explosion radius so large that you need only shoot near an enemy to do damage, but very few classes start with one, requiring you to shell out either XP or Gold in order to unlock them. This is the only real issue with the unlocking system — some gated items feel like they should be the starting items for a class. 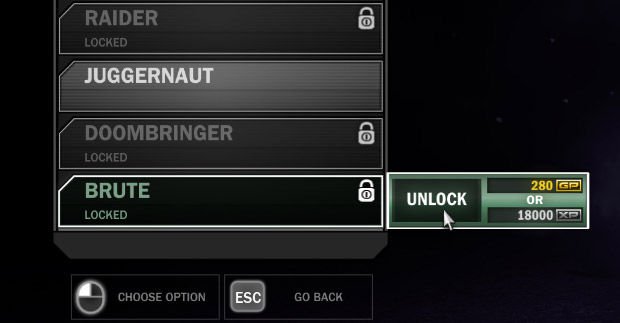 There are four gameplay modes in Tribes: Ascend, but only two of them are truly balanced and fun. Team Deathmatch has a single flag that grants the holding team double points, but in the end it just feels a bit “been there, done that.” Arena Deathmatch is even worse, placing you in a much smaller arena with a set number of team respawns. Even though you’re skiing really fast (hopefully), these modes feel uninspired and certain classes feel underpowered. They are quick diversions at best, but they don’t contain the true Tribes experience.

The remaining two modes — Capture the Flag (CTF) and Capture and Hold — are where the most engaging gameplay can be found. CTF truly captures (get it?) the essence of what Tribes: Ascend is. Besides the basic “get their flag” aspect, each team has a base that they have to keep powered and upgraded in order to properly defend. A radar station and base turrets are powered by one central generator, which the enemy can destroy to cut power to everything until it is repaired. This often means that playing defense is just as vital and important as playing offense.

Capture and Hold is a bit larger in scope, as there are five control points to manage. The team dynamic is definitely there, but it feels more disjointed. Usually, there are about two or three points that will constantly go back and forth between teams. There is no generator to take care of, but you’ll still want to make sure that the radar station and turrets are up and running while you control the point. In fact, once I repaired a turret for one of our captured points, but unbeknownst to me, it was simultaneously being captured by the enemy. Naturally, as soon as I repaired it back to its functional state, it shot me point blank in my face. Small moments like this are what make Tribes: Ascend so interesting to play. 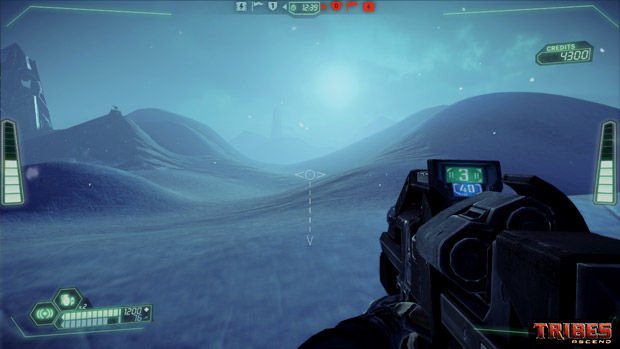 During matches, you’ll earn credits to spend on a multitude of things. These are different from the XP and Gold that you can spend outside of matches. Credits are earned on a per-match basis and can only be spent during that match. Credits allow you to upgrade your base, call in air strikes, or purchase vehicles. Vehicles are somewhat pointless at the moment because of how quickly they are destroyed. They just aren’t worth it for the amount of credits you have to spend to purchase them.

The maps themselves are absolutely huge, except in Arena mode, and consist of plenty of hills used to gain speed. Map knowledge is crucial, especially in CTF, as it will allow you to set up the perfect routes to gain speed and capture the enemy flag without stopping. Luckily, Tribes: Ascend allows you to roam the map freely whenever you wish to gain such knowledge. If you capture the flag without a lot of speed, it’s considered a “llama grab,” and the game makes sure to let you know when you’ve accomplished such a heinous crime by awarding you a special medal.

In fact, the game gives you plenty of medals for your in-game achievements. Such standards as Double Kill or Revenge Kill are still there, but the game has included some original ones, like the Blue Plate Special (hitting an enemy with an explosive weapon while in mid-air), to let you know it really cares. These medals are nice little rewards that make you feel good for doing something useful or impressive. 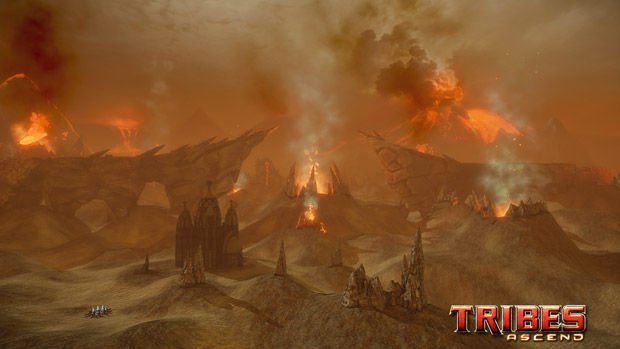 While you can probably tell just from the screenshots, Tribes: Ascend looks fantastic. Although almost every map consists solely of hills upon hills in terms of terrain, the overall aesthetic varies greatly. One map consists of snowy terrain and an icy-looking sky, while another has a deep red hue and two giant lava-filled castles. You won’t have to worry about getting the feeling of déjà-vu while playing the various maps, thanks to the huge difference in aesthetics.

Lag seems almost non-existent, as long as you stay on your region’s server. It is not common to see players instantly teleport to where they were three seconds ago, or deal with damage not registering due to a drop in latency. Getting into a match is also really quick, with wait times often clocking in at under a minute.

To join a game, you’ll simply pick a mode type and be placed in a queue. You can also join in on a friend’s game if you want to play together. Now that Tribes: Ascend is out of beta, Hi-Rez Studios has also added a “Custom Server” option for players who want a slightly modified experience. Not just anyone can create a server yet (though it still says “Sneak Preview”), so you’re currently funneled into whatever specific modifications that other people have chosen. Apparently, people hate the Technician class enough to create servers banning it. 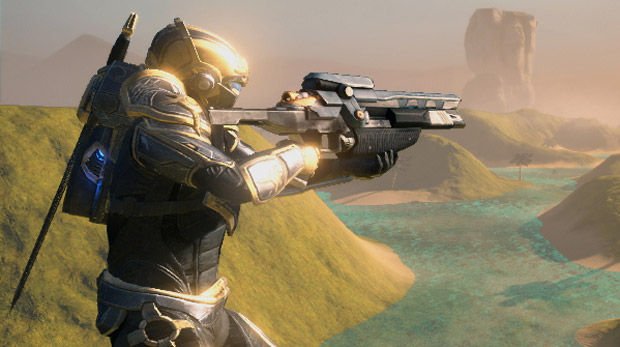 Tribes: Ascend brings jetpacks back to the FPS genre in a major way. Even if you’ve never played a Tribes game before, Ascend offers the perfect opportunity to jump in and see why the franchise has lasted this long. You’ll want to spend the majority of your time in the CTF mode, though, as that is what Tribes was created for and is likely where you’ll find the most enjoyment.

Some of the items will require either a significant amount of playtime to unlock or a quick cash payment, but if you want to support Hi-Rez Studios for making an incredible free-to-play game, you shouldn’t feel cheated by paying some extra money. Just because it is “free-to-play” doesn’t mean you can’t throw some of your money their way.

I didn’t expect Tribes: Ascend to finagle its way into my normal rotation of multiplayer games along with Team Fortress 2 and Dota 2, but once I started embracing the skiing mechanic and playing as a team, I found myself booting it up more often. Given its free-to-play nature, one can only hope that the vehicle imbalances will be fixed and additional worthwhile game types will be added in the future. For now, it’s still an incredibly enjoyable and unique FPS experience that you have no excuse not to download and GO FAST.