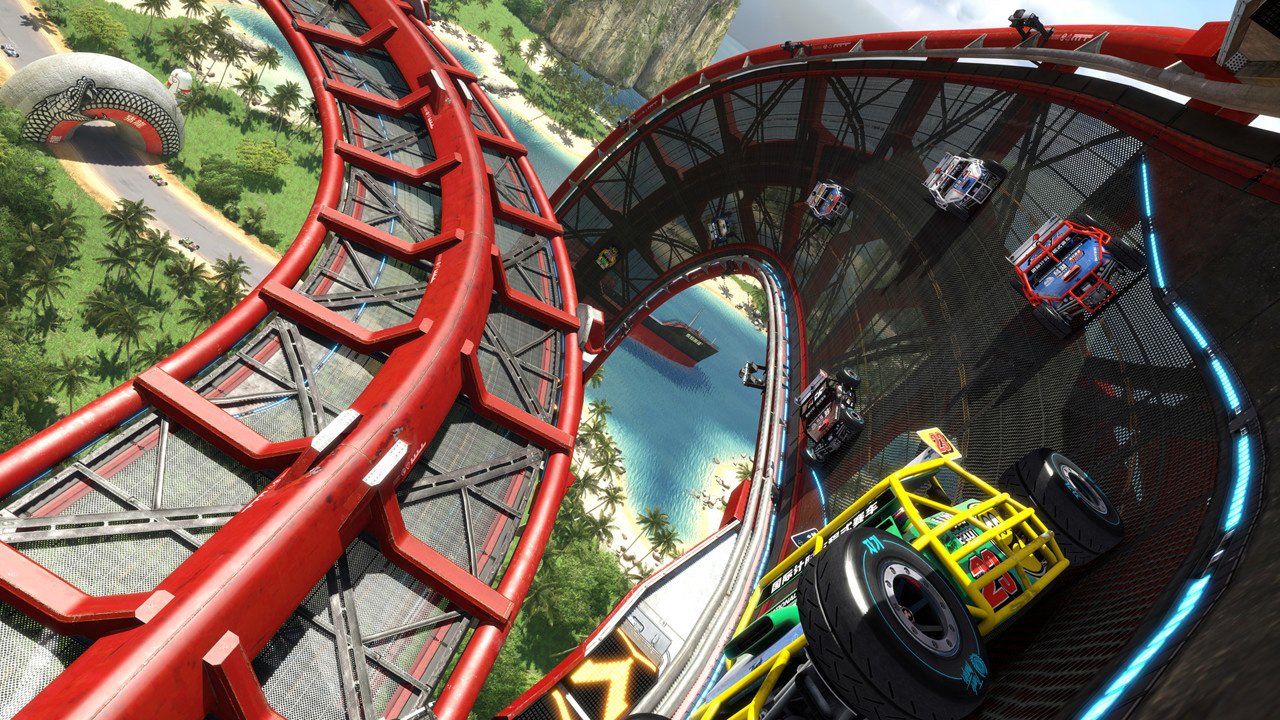 Like its predecessors, TrackMania Turbo is an arcade-stye racing game built around small victories. At first, it’s just a relief to crawl past the finish line, no matter how embarrassingly long it takes. Then, after developing a working familiarity with a level’s layout and building muscle memory for the abrupt twists and turns, earning that first bronze medal feels pretty good. But it’s not enough. It’s never enough.

To shave off the seconds needed to get silver, much less gold (or beyond!), there’s little if any margin for error. Waiting slightly too long to start drifting for a U-turn and scraping up against a guard railing, even for a split second, can spell disaster. Better hit that restart button again.

There are mid-level checkpoints, but I sure as hell didn’t use them. It’s all or nothing. 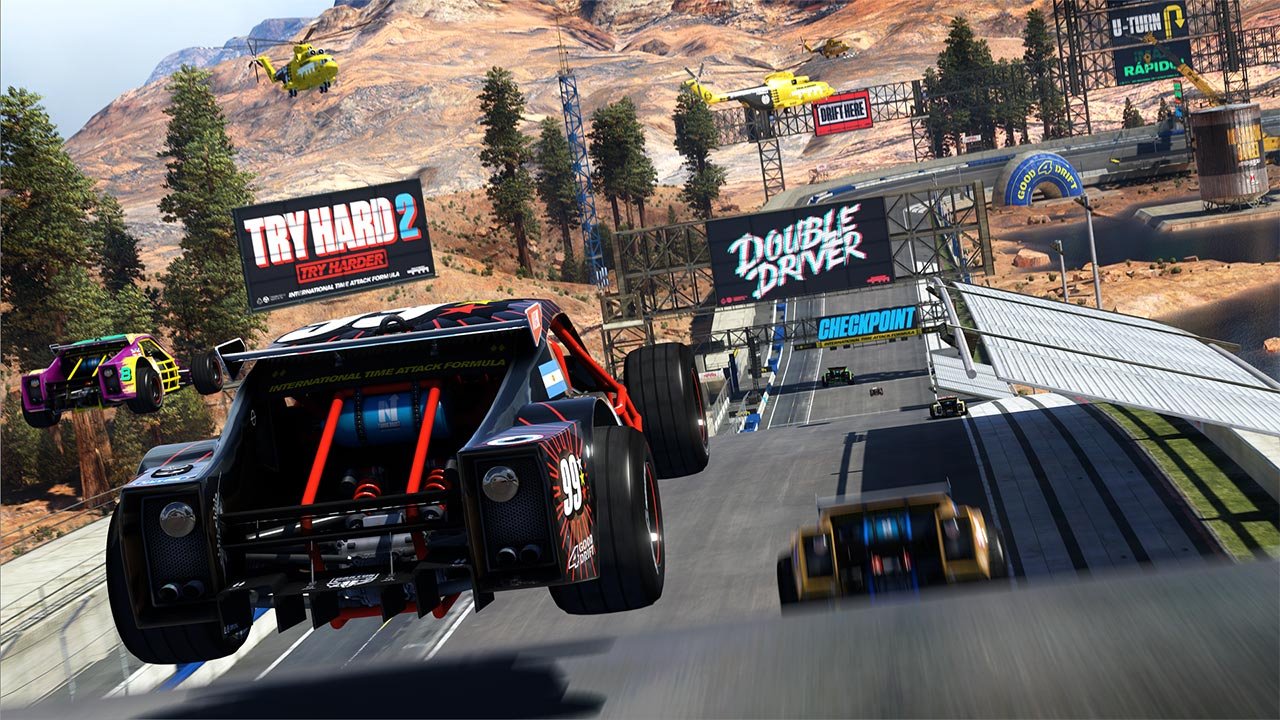 The controls couldn’t be simpler, but they are absurdly sensitive. The lightest tap of the analog stick or d-pad can send your lightweight car head-first toward a wall on either side of you, assuming there are barriers and you don’t simply careen into the ocean. But the inverse is also true: it’s possible to readjust your steering just as quickly to compensate. With the uneven or otherwise unforgiving terrain you’re up against, staying on the track requires continued effort. You have to blink strategically.

The ultra-responsive controls have freed Nadeo to come up with impossible-looking courses and fairly demand that you not only make it through to the other side, vehicle relatively intact, but do so while maintaining absurd speeds. I’m talking jumping hundreds of feet off ramps, driving sideways on walls, and flying straight down tracks that are literally roller coasters. As wild as the spectacle of TrackMania is, without the patience to try, fail, and fail some more, an experience like this could prove infuriating. I rarely got too upset. Part of that is on good signposting that calls out upcoming obstacles and part is on the short length of levels. Multi-lap tracks aside, many races last 40 seconds or less.

It’s hard to pin down exactly what it’s like to play these games, but with all of the neon present in Turbo, I felt as if I were living inside a pinball machine. (Speaking of: I’m afraid and excited to try this game in virtual reality.) When I’m tearing up a track and performing at my best, it’s blissful chaos. I’m in control, but only barely, and I’m fully aware that at any moment it could crumble after a single slip-up. It’s as overwhelming as it is invigorating, a combination that makes it easy to keep coming back again to try to improve my times in pursuit of better medals and the accompanying level unlocks.

Fans who have kept up with the series will find most of the environments familiar, but there’s all-new stuff, too. Turbo splits its 200 levels across four landscapes: Canyon Grand Drift, Down & Dirty Valley, Rollercoaster Lagoon, and International Stadium. I would’ve liked to see more locations, but Nadeo manages to use what’s here in interesting ways. Thematically, the Lagoon is my favorite thanks to its upside-down, twisty-turvy magnetic tracks that look super cool in first-person, but I’m still not used to its slippery beaches. Some of the terrain types — sand, dirt, and wood flooring especially — take real getting used to, and even now that I understand how to adequately handle them, I don’t find them any less terrifying or challenging. I’m holding on for dear life.

There are also boost pads to contend with (more speed isn’t always advisable!) as well as sections of the track that temporarily shut off your engine, forcing you to maintain momentum and be extra mindful not to brush up against any walls. I can usually manage those track gimmicks fine, relatively speaking, but I often struggle with ramps. Seriously, ramps! They should be so basic! But getting a wobbling car lined so it launches just right and doesn’t come down at a weird angle can be finicky and feel a bit arbitrary. It’s one of my few annoyances with the exaggerated physics.

The game grows increasingly stingy with its level unlocks the further in you get. Bronze medals cut it at first, but at a certain point, it’s necessary to go back and earn silver on the first 80 tracks (no easy feat) to access the next batch. Well, kind of. There are a couple of ways around that: the first 160 levels, all but the hardest of the hard, can be freely played in multiplayer even if you are alone. With persistence, it’s also possible in the solo campaign to earn “joker” medals that let you off the hook to an extent. I’m glad there is a concession for putting in the effort and you aren’t totally screwed if you can’t nail one specific bastard of a level, but I wish Turbo were more forthcoming with its unlocks. 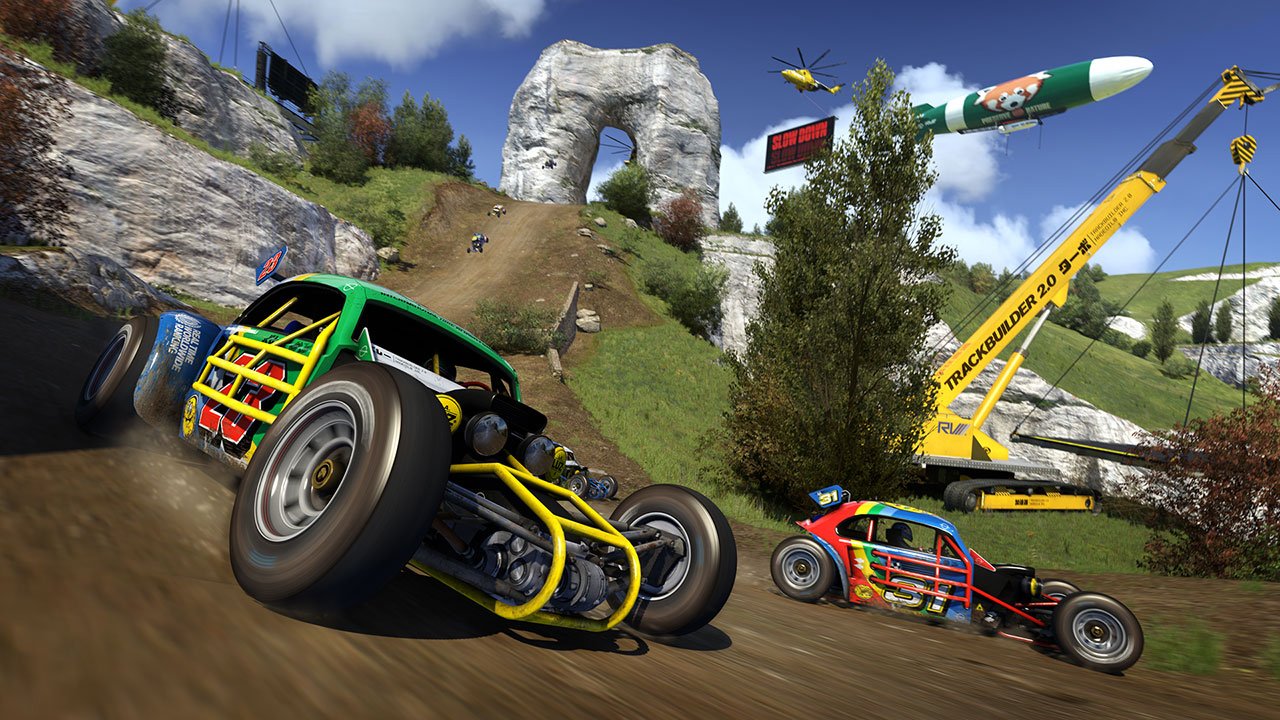 The online multiplayer is a beautiful mess. I love it. It’s up to a hundred racers simultaneously trying to score their best time on the same track. Everyone else is represented as a ghost, so you’ll see these huge globs of players clipping through one another in the beginning, and then people start to disperse as they crash, restart, or make it to the finish line and try again. I typically like to get several solid attempts in and then mess around until the next track in the room’s rotation comes up. My favorite part: intentionally going off-course and trying to get others to follow me underwater or up mountains. The world is way less restrictive than it reasonably should be in a “Why are they letting me cruise around here? Will this break the game?” sort of way, but I think that openness is endearing.

On the local multiplayer side, there are a bunch of options. One of the modes puts two drivers, each with their own gamepad, in a single car. Both players have equal control and their button inputs are represented on-screen. That seems crazy, and it is, but it’s far more manageable than it probably sounds. There’s split-screen support for head-to-head races and the ability to play against a bunch of other folks by trading off a single controller as well. Nadeo also thew in silly variant modes, accessed with “secret” button presses that I’m sure will be posted online soon if they aren’t already up yet.

The other big piece of the game is the track editor, which has options catering to beginner and skilled creators alike. I wasn’t compelled to spend a whole lot of time with it, as I’ve never been much into the building aspect of TrackMania, but the tools are robust and control decently on a gamepad. If you want to throw together something simple in a hurry, the no-fuss version of the editor is straightforward to the point where you could sleepwalk through it. Or, even easier, you can specify a time of day and course length, and the system will auto-generate a randomized track. You’ll see the level materialize from an overhead view and can opt to either keep it or trash it. The results are… not stellar, but it’s a neat little experimental option for goofing off. 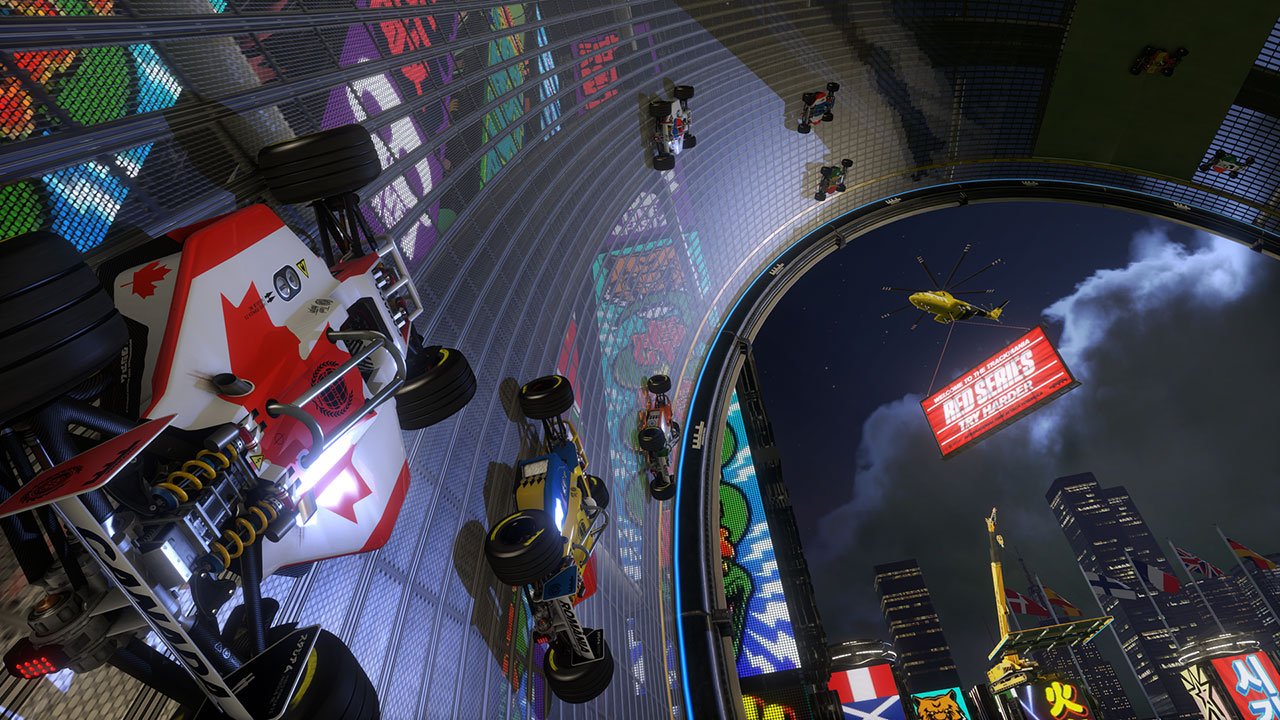 While I haven’t tried TrackMania Turbo on PC, some options fans have come to expect — like player-hosted dedicated servers and all of the wackiness that entails — are missing this time. Understandably, those folks aren’t thrilled. If you’re a PC player, it’s worth looking into that situation more in depth but, at it stands for this review of the console version, I wasn’t expecting that kind of support.

On PlayStation 4, I did encounter a glitch in an online session where scoring information mistakenly stayed plastered on the screen, permanently obscuring my view until I left the room and joined another. There was also the occasional instance of screen-tearing (or some similar-looking oddity) in the solo campaign before races commenced. As for load times, they’re okay. It might take 15 to 20 seconds to get into the average level — enough to feel slightly too long — but once you’re in, you can restart without delay. Aside from those minor graphical issues, the game performs admirably.

It’s great to see TrackMania back on consoles and, going forward, I hope Nadeo can earn new fans while keeping the veteran players happy. All told, Turbo is some of the most fun I’ve had with the series.