Can anyone provide me with a decent challenge?!

I’m not sure there is a better time period for video game adaptations than the Han dynasty period of ancient China. Filled to the brim with heroic individuals, grand battles, and personal drama, that historical setting is most famous for being adapted into the 14th century novel Romance of the Three Kingdoms. It has everything that makes for a good story and is based on real-life events: it’s a win-win!

With the Total War series being a staple in large-scale strategy games for over a decade now, it only makes sense that the Three Kingdoms period would eventually find a home here. There isn’t much you need to change to provide a Total War version of this story and it also perfectly encapsulates what makes Creative Assembly’s series so wonderful. It practically makes too much sense.

While not everything in Total War: Three Kingdoms clicks, one cannot deny that Creative Assembly has knocked it out of the park with regards to capturing this era of legends. 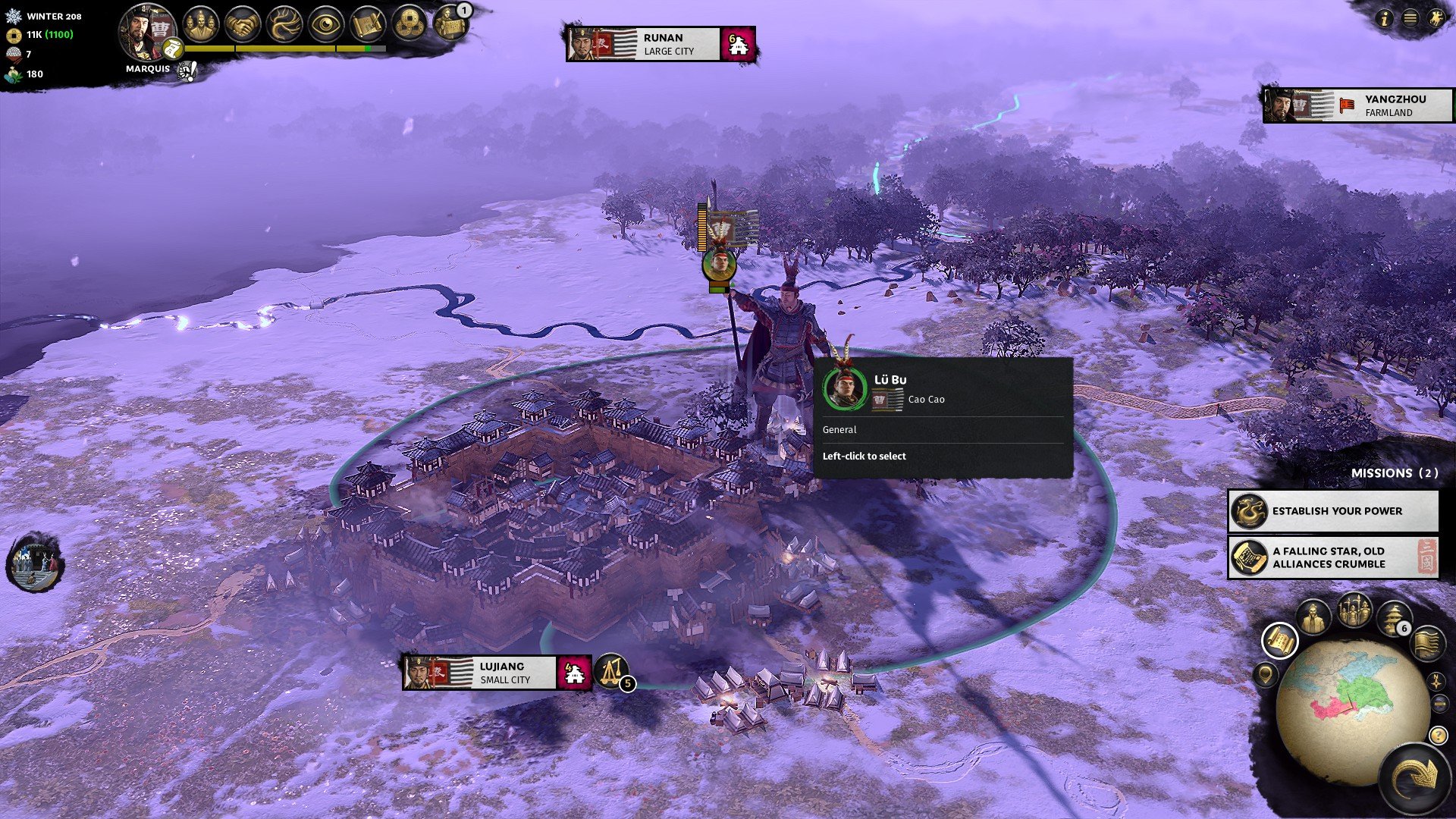 Booting up Total War: Three Kingdoms for the first time can be daunting. One look at the Campaign menu will show you 11 different leaders you can start your journey with. Each has a specific trait that makes them a viable option to become emperor of China and each has unique units that give them a leg up in specific battles. It’s hard to parse everything if you’re completely blind about what the Three Kingdoms period is all about. In possibly the only failure of this game, Total War: Three Kingdoms does nothing to get you up to speed about who would be a good choice for you.

That being said, starting a campaign prompts you with the question of whether or not you’re new to the Total War series. Selecting no will actually reduce the number of hints you’re given with a further option to shut them off outright. Selecting yes will practically guide you by the hand to figuring out how the campaign map works and how unfavorable battles can have the odds shifted through smart strategic thinking. While you may be jumping around from ruler to ruler trying to find one that gels with you, at least you’ll understand how the game plays.

To that end, it’s quite an accomplishment how well Creative Assembly has adopted the Three Kingdoms story for each of this title’s generals. In Luo Gaunzhong’s novel, infamous leader Cao Cao was a total jerk that used manipulative tactics to create an advantage for himself in times of need. Playing Cao Cao in Three Kingdoms, you’re given the unique ability to diplomatically influence other nations into starting proxy wars with each other or negatively influencing the opinion of one another. That attention to detail creates a sensation that you’re living in an actual, factual world, something that past Total War games haven’t quite captured as thoughtfully.

This feeds into the overhauled diplomacy system Three Kingdoms exhibits. While past Total War games shared similarities to the Civilization series, Three Kingdoms goes full in on recreating what works so well about Firaxis’ popular franchise. You now have total control over what you can trade, what you can request, how you can reject offers, and even a points system to see if a deal will be accepted before you even request it. It’s a real treat to have an enemy officer request a piece of land from you only to turn around and offer more gold and shift the deal in your favor. It may be a little video gamey, but it makes dealing with diplomacy a lot more engaging than any strategy title I’ve played before.

In fact, I could talk more about the campaign structure than the battles because Three Kingdoms has overhauled this so much that I feel it is the standout feature here. In past Total War games, the campaign map felt like a means to an end for recreating historical settings. It was a necessary evil so to speak since you couldn’t simply have constant battles without context. In Three Kingdoms, I became much more interested in upgrading my settlements and plotting the paths of my armies because the campaign map doesn’t feel like an afterthought.

It also helps that if you just plain detest the sometimes hard-to-follow battles, you can automate them and stay glued to the campaign map. I wouldn’t overly rely on that function (the RNG used to determine success is often a gamble), but Creative Assembly has injected some very interesting mechanics into this often overlooked aspect of Total War that makes it hard to put down. During a few of my campaign runs, once I gathered enough money I often skipped battles entirely so that I could stay involved here. 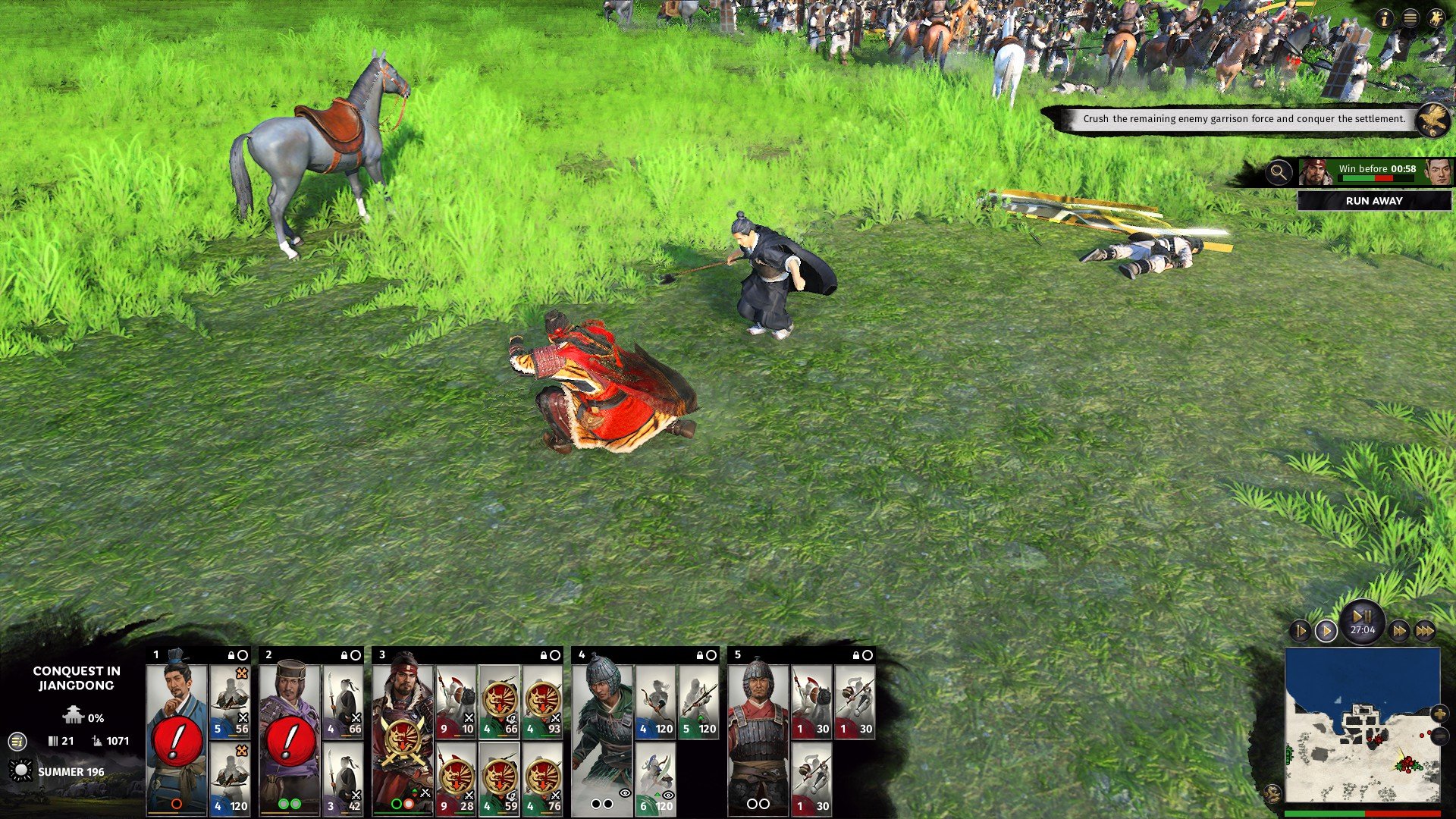 That isn’t to say the battles are bad, but they are the one aspect of Three Kingdoms that doesn’t feel different from the past. I haven’t played all of the latest entries, but the same tactics I’ve been utilizing since Rome: Total War released work just as well in Three Kingdoms. The enemy AI in battle isn’t that intelligent on difficulties below Hard and will often fail to adjust to a flank coming their way. You can typically bum-rush the opposition, take out their generals, and win skirmishes that are overwhelmingly against you. The sense of scale is still a sight to behold, but the battle system could use an overhaul.

That said, I think the thing that really sells Three Kingdoms is the majestic art style. Forgoing pure realism, Three Kingdoms embraces the larger-than-life personas of its cast and creates a vivid and colorful presentation. Characters are drawn in a painterly manner and battle animations look like they are ripped straight from Hong Kong cinema. Apart from something like the Dynasty Warriors series, these historical characters have never looked better before. The very sparse cutscenes bring this all home with a sense of scale that is appropriate for the epic saga of the original novel.

If this is all sounding a bit too fantastical for you, though, you’ll be happy to know that Creative Assembly has not forgone historical accuracy for the sake of a cool game. When you begin a campaign or random battle in Three Kingdoms, you’re given the option to play in a Romance mode or Records mode. For Romance, think along the lines of Dynasty Warriors with regards to your generals. They’ll be able to ride into battle and take on hundreds of soldiers with little problem. They’ll even have a wide array of special moves and can be equipped with armor for tactical advantages in certain situations. 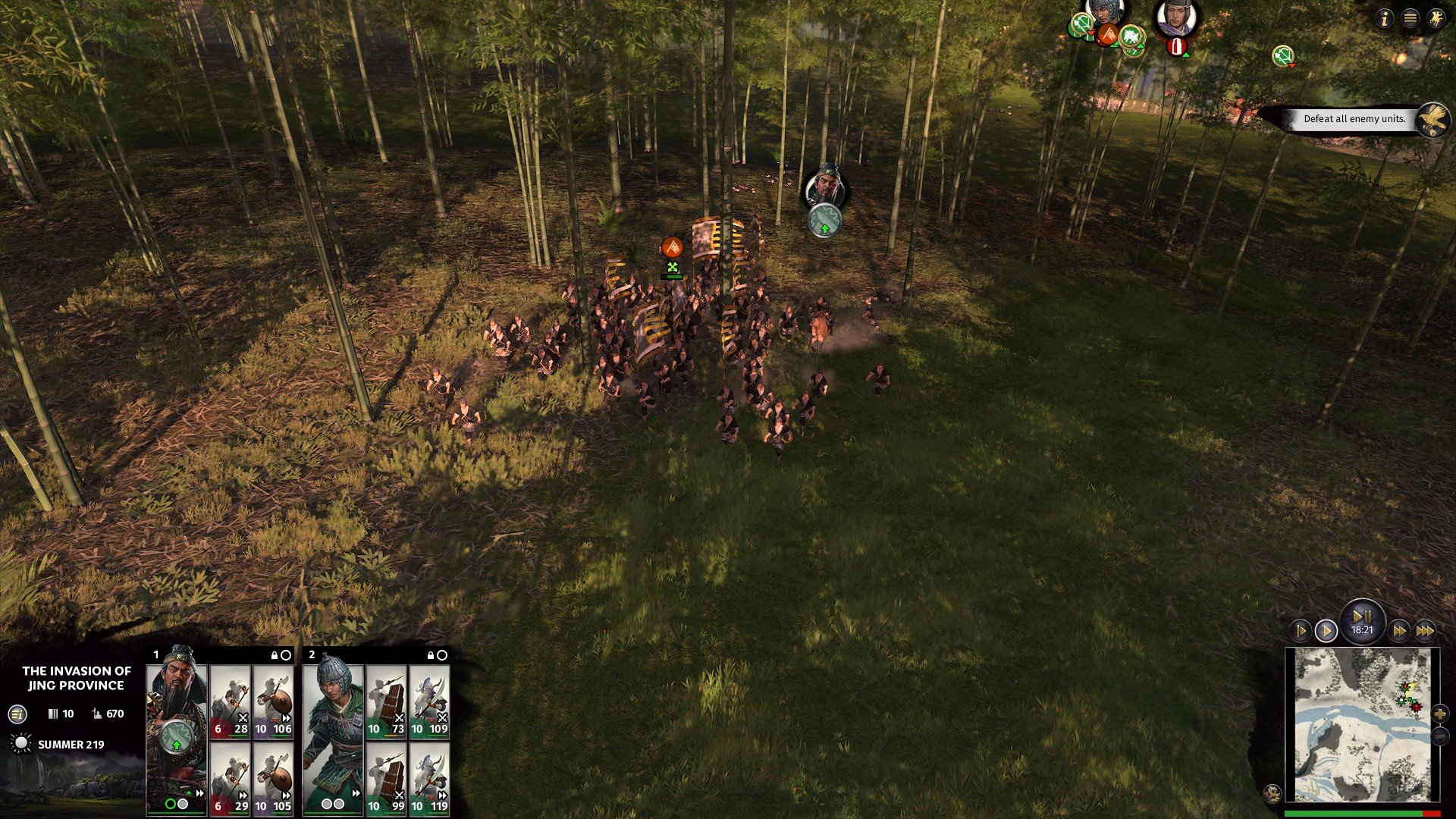 For Records mode, your generals will be reduced to the quality of mere mortals. Fatigue will plague them if they battle for too long and they’ll need to be smart about their movements on the battlefield so as not to get flanked and killed. Even movements on the campaign map will tire out your troops, which can make ambushes all the more deadly when you’re caught unaware. There’s a stark contrast between the two options that cater to different crowds, but I appreciate the choice.

In another solid move, both options will alter the story that your general progresses through. In Romance, for instance, tyrannical ruler Dong Zhuo has the option of marrying the concubine Diaochan and infuriating warlord Lu Bu. In turn, Lu Bu can then murder Dong Zhuo and assume control of the faction, much like how the novel played out. In Records mode, though, Diaochan doesn’t exist because she wasn’t a historical figure (no actual record of her exists). The whole plotline with Lu Bu betraying Dong Zhuo plays out more like how it did in history, which gives players two totally separate options for experiencing each ruler.

I’m not sure I have the fortitude to go through two storylines, but only because a single campaign playthrough can take you up to 20 hours to finish. With Total War‘s campaign map being the literal map of China, you can imagine how insanely large your army will become. When you’re at hour 14 and you need to check in on 120 different villages, the micromanagement starts to wear you down. I wish there was an option to automate the upgrading process for your buildings because it would be immensely helpful for those late-game sessions when you’re closing in on a victory and just want to be finished. 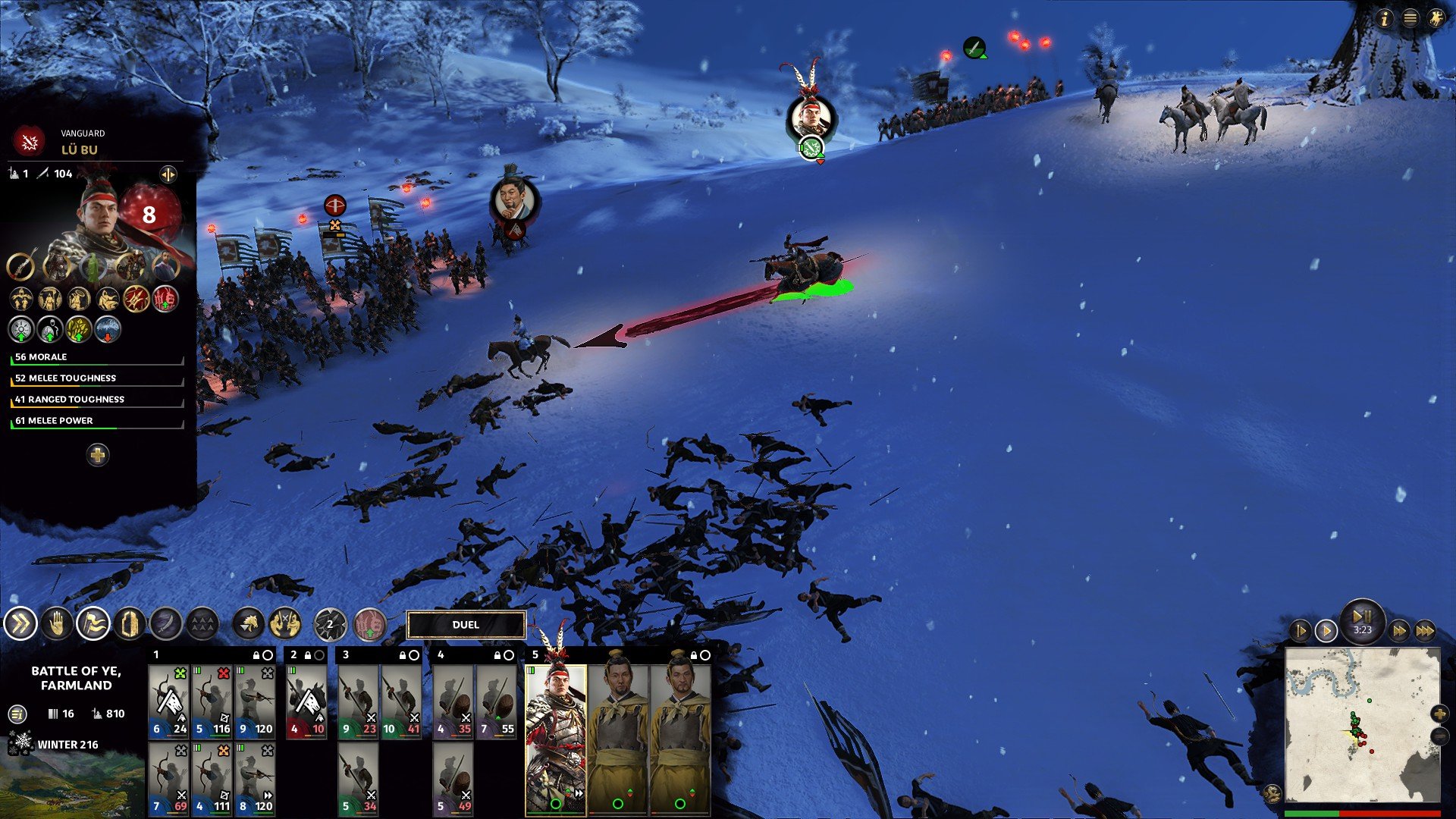 Still, that’s a minor complaint in the grand scheme of things. It can be tedious, but watching the map slowly shift to your faction’s color is a rush of adrenaline Total War hasn’t had in quite some time. That desire for one more turn is strong and the knowledge that you’ll have yet another sliver of the map to call your own pushes you to keep going beyond your limits. I’ll readily admit I played Three Kingdoms for eight-hour stretches without realizing simply because of how well I was progressing in the campaign.

Once you’re all squared away with the campaign, Three Kingdoms doesn’t have a whole lot else going on. There are historical battles you can play through, but these are quick battles that are over before they even really start. Going through certain critical moments of generals’ lives, these battles are more unique than what you’ll find in the campaign but don’t really expand on the stories of the novels in any fashion. This is the only place you’ll find real cutscenes, but even those aren’t capped off with a grand speech or sense of completion. The menu doesn’t even tick off if you’ve finished a certain scenario. It can be deflating to overcome a huge army and then have the game not acknowledge your feat.

Multiplayer, at least, isn’t limited to just the battle mode. If you want to drag a friend along for a multi-day campaign, you’re free to do so. Setting up a co-op session is also more fluid than how Total War accomplished the task in the past. You won’t launch a campaign specifically as a cooperative match, but can form a military coalition with your friend and then proceed to conquer China together without much fuss. Since you won’t have to worry about accruing treachery points when backstabbing your buddy, you can also treat them like mere cogs of war, which is sure to go over well when you meet up again. 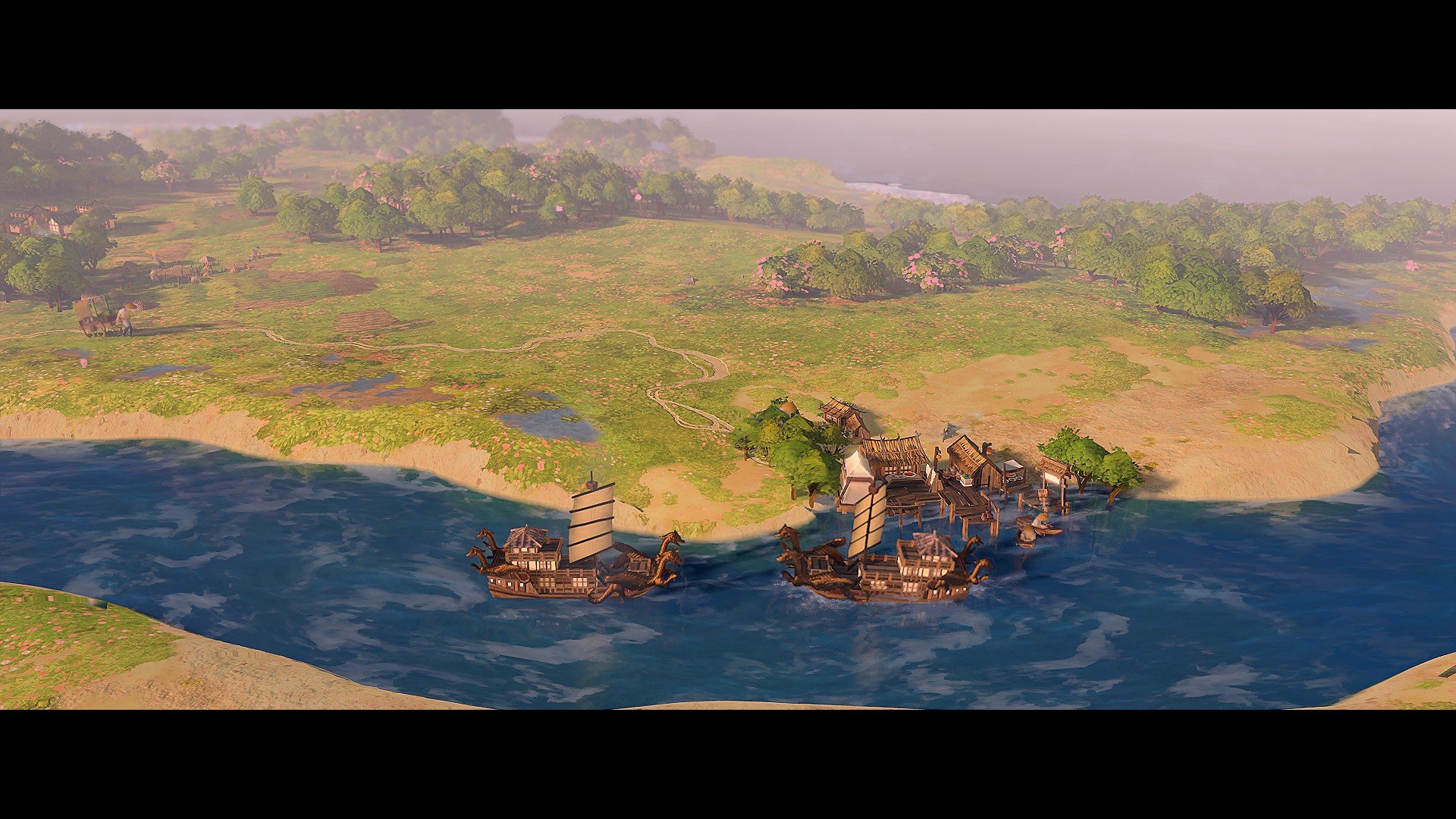 The stability of internet matches is perfectly apt for this, too. I wouldn’t call the netcode flawless (some pauses can occur when you’re doing battle), but the slower nature of Total War lends itself well to network play. The few matches I could find were mostly lag-free and I was able to dominate my opposition with tactics they couldn’t anticipate. I’d call that a win as far as connectivity is concerned.

Overall, Total War: Three Kingdoms can be summed up as yet another great entry in the long-running series. While it may not be the absolute pinnacle of what Creative Assembly can achieve, it has become my favorite entry simply because of the setting used. We’ve reached a point where your personal favorite Total War will be determined more by the property being adapted than any worry about quality or gameplay factors. Since everything is fine in Three Kingdoms, what else do I really need to say?

Go and pursue Lu Bu, if you dare.