Some classic games aren’t made around a great idea, but rather, great execution. The idea of a points-based arcade skateboard game wasn’t exactly radical in 1999, with games like 720° and Skate or Die! predating Tony Hawk’s Pro Skater by a over a decade. It was recognized because developer Neversoft’s execution was near flawless. One sequel later and perfection was achieved. No other series made players feel like skateboarding supermen quite like Tony Hawk.

Though later series entries have their fans — I have a soft spot for Tony Hawk’s Underground 2 — the first two games established the franchise’s formula, offered some of its most memorable levels, and left the biggest impact on the game industry. It’s no surprise then that Tony Hawk Pro Skater HD focuses exclusively on these first two Hawks — though THPS 3’s revert and levels will arrive as DLC. Rather than repackaging these two classics, developer Robomodo has attempted to replace them by making a new game from the ground up, combining the best maps, songs, and features of both titles.

It’s abundantly clear that Tony Hawk Pro Skater HD isn’t made by the masterminds at Neversoft, but by the team that made the abysmal and broken Ride and Shred. Strong execution isn’t exactly their forte. 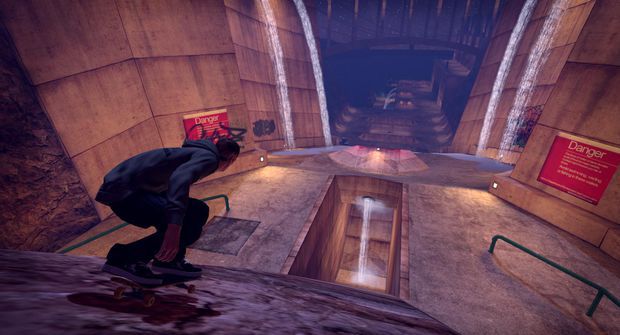 Some games can become an obsession, but, for me, Tony Hawk Pro Skater 2 was more than that. For an entire summer, me and my best friend played the demo of the game non-stop. If we were talking, it was with a controller in hand. If we were listening to music, it was through my TV speakers, blasting the game’s energetic pop-punk soundtrack. If we were connecting to the Internet, it was to spend three hours downloading a video of a two-million point run on Marseille (the only stage in the demo). That love of THPS2 never died. It’s still one of my favorite games. I think.

It’s true that this HD update features songs and levels from both games, but the sequel is given preferred treatment. Four of the game’s seven maps and six of the game’s seven songs from the originals belong to THPS2; not to mention that the game-changing manual is the dominant move you’ll use across all maps, in order to keep your combo going and score high. Let’s just ignore for a brief moment that you can get ALL of THPS2’s tracks and maps (as well as the original’s levels) in Tony Hawk Pro Skater 2X. Let’s focus on the little that THPS HD brings to the table.

With only seven maps, I expected at least some major overhauls in their design, both visually and structurally. Whether out of fear or respect, Robomodo has left these stages mostly untouched. The geometry and layout of School II, Hanger, and other classics remains exactly as you remembered it, for better or worse. Given the fact that most of the game’s seven maps focus on the smallest, simplest levels of the series, I suspect that maybe the developer was just negligent. Playing the game only makes me come closer to this conclusion.

It’s been some time since I played a Tony Hawk game, but it didn’t take me long to start performing specials, jump from rail-to-rail, and maintain a combo for 20+ secs. THPS HD didn’t make it easy for me, though. Having been built from the ground up, Robomodo was tasked with recreating the perfection that Neversoft achieved in their systems: the right speed, the right gravity, the right spin, the right everything. All of these variables add up to the sublime flow of classic Tony Hawk. Without them, you have THPS HD. The gravity feels odd, the game is slow, it takes way too long to recover, you’ll frequently glitch out into space after bailing, and encounter lots of frustrating moments due to changes the game made over the originals. Above all, the game just isn’t fun. It’s frustrating.

The areas that Robomodo has attempted to change or leave untouched are puzzling. The game’s menu gives you immediate access to a strategy guide of sorts, showing every goal and item’s location on the map. Yet, the game doesn’t let you change what song is playing — nevermind later entries’ ability to customize a track list. There is also no move list, so you’ll have a hell of a time remembering what special moves you have. These annoyances extend to even the structure of the entire game. The original locked players out of levels until they acquired a certain amount of money, while THPS HD locks players out until enough goals are accomplished on a previous map. Why limit the player like that? 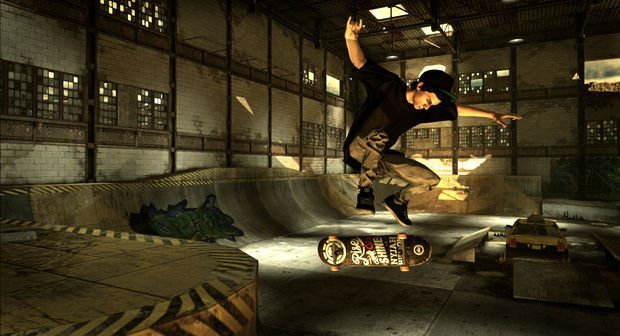 The above became especially frustrating when I got stuck on Downhill Jam and Venice Beach, easily the worst maps from the first two Tony Hawk games. Why did they select these two? I know the answer to the first (It’s Tony Hawk’s favorite), but I’m not sure about Venice. Other than Achievement grinding and unlocking new characters/modes, there isn’t much incentive to even complete the game. There is no fanfare at the end of career mode. It just kind of ends without even telling you.

Once you’ve collected S-K-A-T-E and ollied over magical bums enough times in career mode, you can play the territory based Graffiti or classic Trick Attack against other players online. Horse mode is strangely absent. If you’d rather go solo, you can play HD’s new modes: Hawkman and Big Head Survival. In Hawkman, you collect coins in the level by doing special tricks near each one. Survival has your head expand until it explodes. The only way to make it shrink is to pull off tricks, but it will eventually burst into confetti. Each mode is a fun addition but they aren’t going to start you on a new addiction. I can see myself playing Survival a lot … if it were in the original games.

The biggest upgrade to Tony Hawk here is the HD upgrade. Tony Hawk has never looked so high definition, grimy, or devoid of personality and color. Hurrah? Robomodo has managed to make these once-vibrant levels look like they are the skate park near Gear of War’s COG base. The player models don’t look much more detailed than the ones in past Tony Hawk games this generation and the environments lack detail. The starting area of Hanger is more fleshed out and Marseille has a more detailed sky, but these feel like exceptions in THPS HD. Considering the slow frame rate (it chugs in multiplayer), texture pop-in, and ugly new color scheme, I think I actually prefer THPS 2X’s visuals — even its textures still look pretty good. 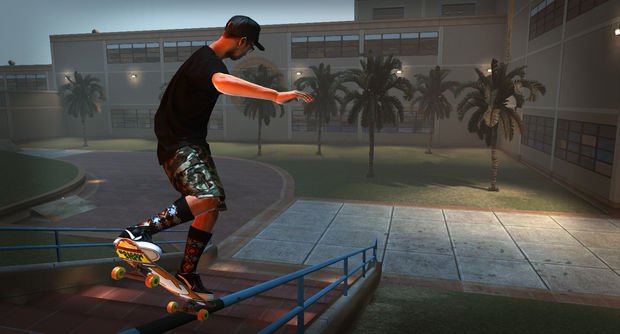 Throughout my rather miserable time with THPS HD, I had a horrifying thought: “Is one of my favorite games crap and I never knew it?” So, I popped in THPS 2X. Hell no, it isn’t crap! It’s amazing! I can easily wall grind, at last! I can spin like crazy with ANY character! I can bail and not grit my teeth at the animation! I am … in … heaven!!!!!!

Sorry, I’ll zip it and tuck my enthusiasm back in but I can’t help it. I love these games, which makes it so sad to see Activision and Robomodo tarnish Neversoft’s legacy. An HD upgrade should make a game look and feel as good as you remember it. Instead, Tony Hawk Pro Skater HD made me wonder why I ever liked this series. In a world where THPS 2X is still readily available for less than $10 on eBay, it’s hard to give this HD downgrade any sort of recommendation. The original games earned our nostalgia, while this release abuses it. It’s short on content, quality, and personality. This is not the Tony Hawk I remember spending middle-school summers with.