If baseball is a game of inches, golf is a game of degrees. The loft of a driver; the slope of a fairway; whether a ball lies above or below your feet; an open or closed club face — even a few degrees’ variation in any of these respects can significantly alter a shot’s path.

Golf is also an expensive game to play. The necessary equipment alone will set you back at least a few hundred dollars, which is to say nothing of concomitant costs such as caddies and carts.

[Editor’s note: Tiger Woods PGA Tour 13 supports Kinect and PlayStation Move, but since I do not own either, I was unable to try out that functionality and will not discuss it in this review. –Samit] 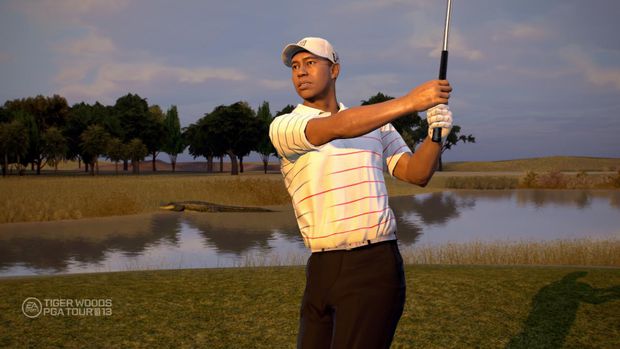 EA Tiburon has made sweeping control changes in PGA Tour 13 that vastly expand shot variety and the effects of user input. Called “Total Swing Control,” the revamped setup is a new paragon of control refinement in sports simulations, presenting a system that’s fundamentally familiar while offering a greater degree of control over shots than in any golf game to date.

A golf shot consists of two discrete segments: the setup and the swing. In aiming mode, the D-pad moves the ball’s landing spot, while the right stick controls the position of the ball in your stance (which affects the shot’s trajectory) and how open or closed that stance is (which affects fade and draw, respectively). Having settled on your shot, you address the ball and prepare to swing. Here, you move one analog stick to determine the height of the club’s sweet spot in relation to the ball — this further affects trajectory, and can also be used to dig a ball out of a bunker or pick it out of the rough — and swing with the other stick. 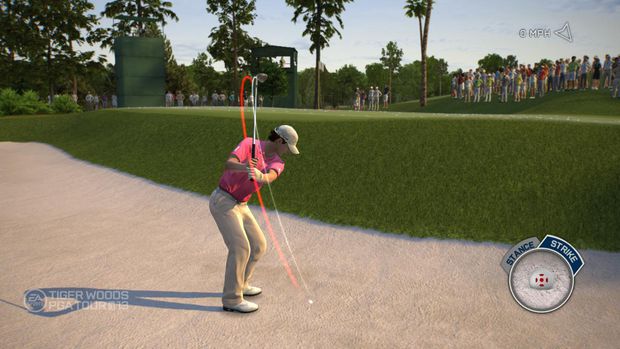 Once you enter address mode, a white trail that represents the ideal arc of your swing appears around your golfer. PGA Tour 13’s updated animation system works in concert with Total Swing Control to present realistic visual cues to a swing’s potential for success. The game now translates your exact analog-stick motion into a swing: if you pull back and to the left, you’ll notice your golfer’s arms and club follow a red trail that deviates from the white arc. Upon swinging, an on-screen graphic provides feedback on the accuracy, power, and tempo of your flicking motion.

Total Swing Control instantly makes every other simulation golf game obsolete. Tiburon has removed the shackles of previous Tiger Woods games, which limited you to certain situational shot types, and the result is astounding in that it lets you do almost anything a real golfer can do. PGA Tour 13 gives you the freedom to succeed or fail, depending solely on your skill with a controller. I’ve recovered from bad lies in the rough or the sand in ways that simply weren’t possible until PGA Tour 13. (Sadly, you still can’t save replays of highlight-reel-worthy shots.) Total Swing Control is a rare innovation, the kind that makes you wonder how you got along all this time without it. I do wish the game did a better job of explaining it, though.

One of last year’s new additions was the caddie, who offered shot suggestions based on current conditions. There’s now an option to see your caddie’s advice and go with it or alter your shot in a way that suits you. He usually provides valuable advice, proposing shots that take into account factors you may not have considered. But a lot of his suggestions made me scratch my head — he tends to over-complicate tee shots with draw and fade, as well as overshoot approach and chip shots. I often found myself ignoring his advice and setting up shots myself; perhaps Tiburon didn’t want players to rely completely on his suggestions. 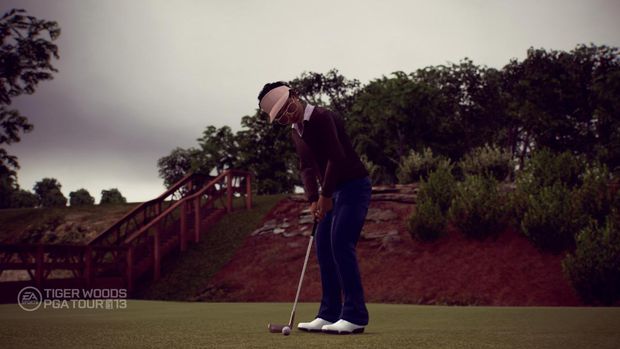 New in PGA Tour 13 is a mode called Tiger Legacy Challenge, in which you follow the arc of Woods’ career from his toddler years all the way through the rest of this decade. You play as Woods at seven different ages in ten eras of his career, reliving some of his most significant golfing milestones and creating some future ones. Each segment of his career includes an audio clip of Woods talking about the challenges he faced and the memories he has of those special moments, and it’s truly endearing to see one man’s passionate, lifelong pursuit of golfing greatness.

Legacy Challenge offers 53 events with enough variety to keep things fresh. But some of that variety manifests in odd difficulty spikes. You’ll struggle to keep pace in repeated matches against Woods’ fictional rival, a stoic redheaded kid named Scott Ratchman, but one challenge sees Tiger return to his backyard as a teenager to practice a few straight ten-foot putts. You will have had to sink many much more difficult putts just to reach that point in Legacy Challenge.

Road to the PGA Tour, the traditional create-a-golfer career mode, has similar quirks. You start out as an amateur, with the promise of an invitation to The Masters if you can win a regional Amateur Championship. I destroyed the amateur competition in tournaments, once going 14-under while everyone below me was at least a few strokes above par. Yet opponents in one-on-one games such as sponsor challenges kept up with every shot I made. Even so, few videogame thrills compare with the accomplished joy I felt upon winning the Masters’ coveted green jacket as an amateur. 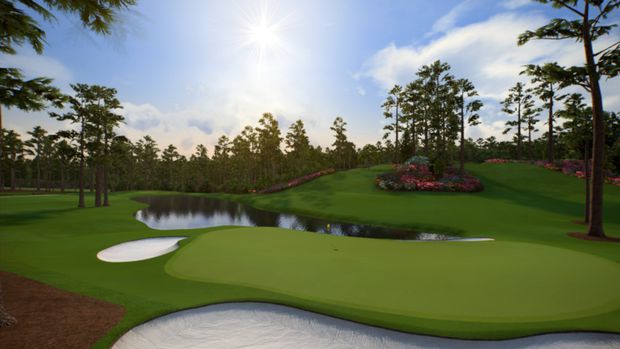 The most irritating aspect of the career mode — and indeed, the entire game — is the pervasive intrusion of paid content. It’s painfully obvious that EA really wants you to spend money in PGA Tour 13, whether it’s the in-game currency of Coins or real money in the form of Microsoft Points. The disc includes 16 courses, and EA is selling another 16 downloadable courses; the six additional courses exclusive to the Masters Collector’s Edition are not currently available for purchase. Tiburon had the audacity to integrate DLC courses into the career regardless of whether you have access to them, so you’ll occasionally come upon an event that you can’t initially play because you haven’t unlocked or purchased the course at which it’s taking place. (Thankfully, you can at least change the venue to an available course.)

This year, you don’t have to buy a DLC course outright (for at least $5 each; less in packs) if you want to play it. You can use your Coins — which you can earn by playing any mode of PGA Tour 13, or buy with real money (at $5 for 15,000 Coins) — to purchase rounds on downloadable courses. You can also spend Coins on Pin Packs. Consumable Pins are limited-use items that confer bonuses such as attribute or equipment boosts, while Collectable Pins can be hoarded as a way to unlock courses. Completing all of the objectives to achieve “Gold Mastery” on a particular course is the other way to unlock it for unlimited use.

That may sound appealing, but it’s actually insidious. While it’s great that you can try out a DLC course without buying it, you’re better off just paying the $5 to own it if you think you might play it more than once. A single round on a downloadable course costs 6,000 Coins; you get two plays for 9,000, and three tries for 12,000. But you earn Coins at a pitifully slow rate: only about 600 per 18-hole round. And the Gold Mastery unlock is something of a charade: most of the Gold objectives are cumulative goals, like achieving 100 pars or hitting 80 greens in regulation, that are difficult and require numerous rounds to complete. The math just doesn’t work out. And what’s particularly grating is that PGA Tour 13 goes out of its way to remind you at every turn that you’re missing out on content, like by leaving downloadable courses in the course select menu as grayed-out options. 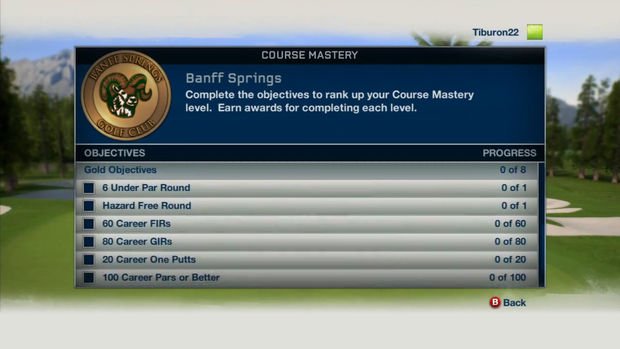 The best way to earn Coins more quickly is to join friends in an online Country Club, essentially a clan. You can compare in-game accomplishments with members of your Club and compete for Club Champion titles, or join with your teammates to take on other Clubs and make your way up the leaderboards. It’s a fun setup that encourages each member of the Club to play as well as possible, and since it incorporates offline progress, you can be a social golfer without ever playing online.

Thanks to the new swing setup, I’ve had more fun playing Tiger Woods PGA Tour 13 than any previous entry in the series. By putting the onus on you to think like a real golfer and execute every shot, PGA Tour 13 makes successful play more rewarding than ever before and gives you the closest possible feeling to mastering a world-class golf course in real life. EA’s bothersome money-grubbing tactics resemble annoying flies that keep buzzing in your ear, threatening to ruin the golfing experience, until you smack them into oblivion with a perfectly played tee shot.