The Witcher was an interesting little game, at once strangely compelling and pointlessly tiring. It had serious potential, but the slow pace and backtracking held it back. Still, it was something of a triumph, especially for Polish game development.

With The Witcher 2: Assassins of Kings, CD Projekt Red has another chance to prove itself, an opportunity to build upon the promise of the original and deliver something spectacular.

Or it could just make most of the same mistakes again while adding some new ones to the mix. These things can always go either way. 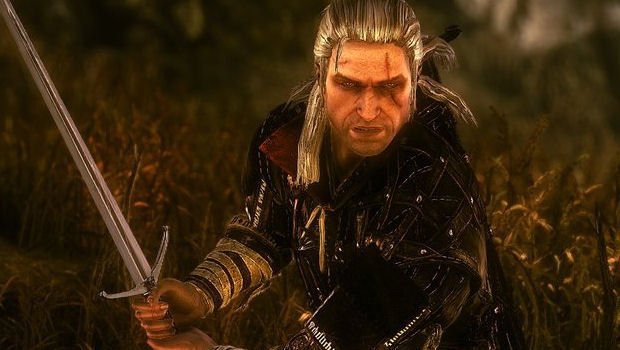 The Witcher 2, like its predecessor, is certainly a unique game. While it bears all the trappings of a roleplaying game, its twenty-five hours of gameplay are structured more like a linear action games with a smattering of optional material. It’s a strange setup, but it’s far from the oddest example of design contained within this odd creature. In fact, little about this game makes much sense, when one considers just how contradictory it is.

The first thing you’ll notice with The Witcher 2 is that its combat is utterly ridiculous. Roleplaying games always risk sporting an imbalanced fighting system that sees a game get easier as the player levels up, but nowhere has this problem been more prevalent than here. Geralt of Rivia, the titular Witcher, starts off pathetically weak and unable to properly defend himself, an issue that’s not helped by the broken targeting system, unresponsive controls, and the aggressive enemies that surround our hero and attack from all angles — you can’t even parry multiple enemies without unlocking it on the character skill chart, and even then it doesn’t always work.

Yet, by the time the game ends, you’ll be cleaving through enemies like butter. If you spam your shield spell and unlock finishing moves, regular fights go from almost impossible to an insulting joke. It seems CD Projekt couldn’t strike the right balance between character development and challenge, so just didn’t bother. This is evidenced in the boss fights, which often rely on guesswork in order to beat, as players figure out the one convoluted, obscure strategy required in order to win. There’s no challenge in that, it’s just throwing shit at a wall and seeing what sticks. 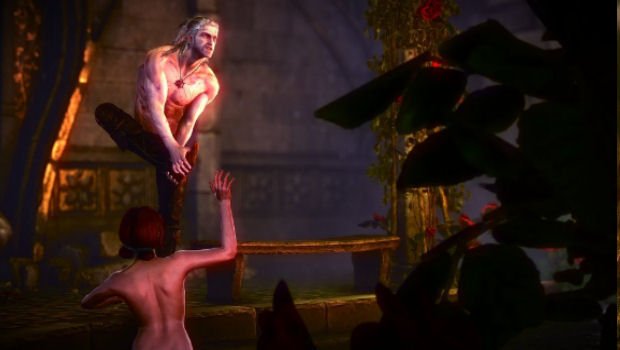 Witcher 2‘s combat system tries to pass itself off as a deep, tactical experience in which you separate enemies and deftly counter attacks. A noble endeavor, but it just doesn’t work. From the outset, Geralt has access to a variety of spells of both the offensive and defensive variety, as well as various potions and bombs that can be crafted with the right ingredients, so he has quite a few tricks up his sleeve. However, enemies are so keen on bum-rushing the player, surrounding him, and striking from the back that all strategy flies out of the window once melee actually begins. The way enemies behave runs utterly counter to the way Geralt fights.

Not to mention, our Witching hero relies on potions to bump up his endurance and attack, but they can only be drank out of combat, which requires players to be clairvoyant and assume when they’re needed. You’ll soon learn that player speculation is a big part of The Witcher 2, in both combat and quests. Much of the game is more a case of, “Try to guess what the developers were thinking,” than anything involving skill or intelligence.

CD Projekt seems to love telling players to do something, but not how to do it. Never has a game’s manual been so important. From simple things like arm wrestling to more important thing like finding an unmarked objective on the map, the game is dreadful at providing player feedback. 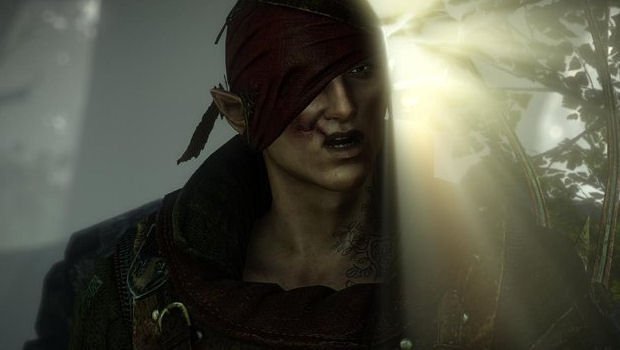 After so much bitching, you’ll be expecting me to say that The Witcher 2 is a terrible game and … it isn’t. It simply requires a huge amount of effort to get into. If you can crack through the game’s tortuous opening hours until Geralt bulks up and stick with the dry, uninspiring narrative, you’ll find a game that manages to hit a fair few crescendos and provides the occasional thrilling battle. My biggest problem is that the rewards are disproportionately small compared to the immense struggle it takes to enjoy the game — a struggle in which Assasins of Kings will fight you every step of the way.

It’s not a poorly made game in the least. As far as European roleplaying titles go, this is absolutely the best example one could hope to find. The combat feels fast and fluid once Geralt is strong enough and, depending on your choices, the second of the game’s three chapters can be an incredible experience with a thrilling conclusion. Witcher 2 can be experienced multiple times with different stories, due to decisions that affect how the entire game plays out, and the adult nature of the narrative — which doesn’t skimp on the brutality, swearing, and sex — might not exactly be mature, but can at least amuse in spite of the overall plot’s dull nature. Oh, and strangely I even like the quick-time-event sections, especially the hand-to-hand brawls, which manage to be quite exciting in spite of their QTE nature.

When all’s said and done, however, one cannot help but feel unsatisfied, like the aggravation of the game’s opening chapter and the brevity of the third just doesn’t do enough to make the game worth playing. I don’t think I’d have completed this title, or even bothered playing for more than hour, if I wasn’t writing a review. I value my time too much to waste it on a game that tries its hardest not to be enjoyed. 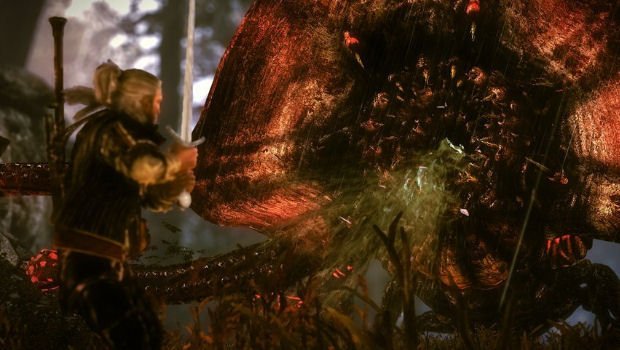 The issue of reward vs. hassle is typified in the game’s quest objectives, which are all subject to flagrant heaps of backtracking and repetition, usually being of the “kill these” or “collect this” variety. Each chapter takes place in one large environment, and players will need to traipse through the same old scenery in order to complete any type of quest. The lack of “fast travel” and tendency for the game to force players back up through a dungeon after they’ve fought their way down adds to the boredom. Most sidequests offer up little in the way of compensation either, and can often be safely skipped without missing anything worthwhile. The extra experience points are nice, but you can usually grind the same amount through combat in with less frustration, and monetary rewards are usually of inconsequential value.

Even aside from this problem, I have a list of niggling issues that, while small on their own, add up to constant annoyance. The game struggles to make doors work properly, often forcing Geralt and NPCs to take turns opening and closing them rather than leaving it open and letting everyone through at once. The shopping menu and the crafting menu are on separate screens, and players need to back out of an entire conversation with a merchant in order to access each one. The auto-targeting system is dreadful, with Geralt constantly switching opponents halfway through attacks and diving into a group of enemies to attack a monster, while ignoring the three that were far closer. Context-sensitive commands such as looting and climbing often require the player to be stood in an exact place, and won’t work if he’s even an inch out of this arbitrary space. These petty grievances mount up over time, especially when they occur at such regular intervals.

The game’s fun moments only make me wish that the whole game was so consistently good, but it’s not. It hits high peaks fairly quickly and then sinks to a lengthy trough with equal swiftness. One moment you’re carving up enemies and feeling on top of the world, the next you’re running around trying to find hidden monster nests and wondering why you’ve bothered.

All this leads to a cliffhanger ending that makes Witcher 2 feel more like a stopgap than an actual sequel. When I look back on the totteringly paced exposition, there’s really not a lot that was said or done. Two thirds of the game feel like extended sidequests, and the conclusion consequently seems rushed. Nothing of interest every really happens, and more intriguing things are only ever hinted at, never revealed. 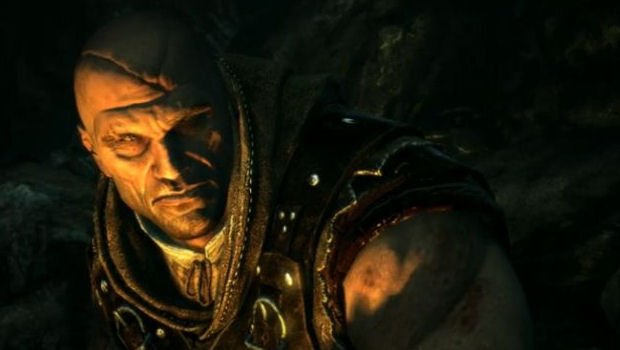 At least it can be said that The Witcher 2 is pretty damn gorgeous. You’ll likely need to make a few graphical tweaks to get a smooth framerate, but once you do, there’s no denying that this is one of the best looking titles out there. The lighting and the larger, more scenic environments really hammer home how accomplished the aesthetics are. That said, there is some notable texture pop-in and laughable character animation, and clothing constantly collides with human bodies, even on NPCs who have armor that should have been designed specifically for them. It’s unsettling to try and talk to a character whose shoulder pads are jammed into their face.

The sound is fairly atmopsheric, with some horrific monster noises and great music. The voice acting ranges from hilarious to embarrassing, though. Welsh accents aren’t exactly the most dramatic, especially when they’re attached to characters we’re supposed to take seriously. As for Geralt, his voice actor still straddles the line between amusingly dry and unpleasantly emotionless. 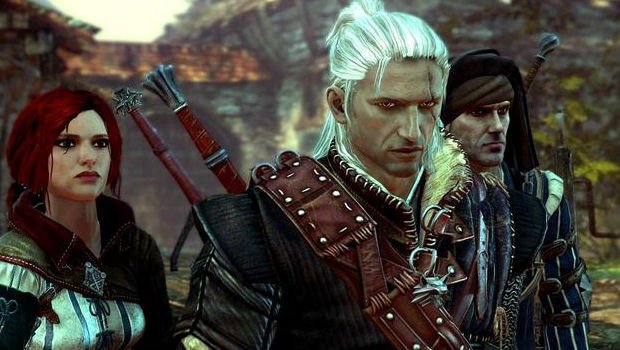 The Witcher 2: Assassins of Kings is a solid enough experience that gets better the deeper into it you get. It starts off as a deeply unsatisfying game which wants to punish players who try to enjoy it, then becomes rather endearing, with the acquisition of power and loot at least providing a traditional sense of accomplishment. When all’s said and done, however, the game’s high points arrive too late and provide too little. While hardcore fans will likely dive into the game and have fun, those who don’t feel that they should be made for pay for a game with their patience will be put off.

At times, Assassins of Kings is good. Great, even. For the most part though, it’s just okay. It does the job and wastes some time, while providing no lasting impression or unforgettable experience. There are just far more fun and intensely more rewarding ways of wasting time.