[This review contains spoilers for The Walking Dead Season One and Tales from the Borderlands.]

When I said A New Frontier was shaping up to be the most consistently good Telltale game since the first season of The Walking Dead, some took that to mean I was calling A New Frontier the “best” Telltale game, over fan favorites like Tales from the Borderlands or The Walking Dead Season One. I can understand the confusion, since video games are an extremely iterative medium and proper usage of that iteration is often lauded by the games press.

But I chose my words very carefully – there’s a crucial difference between “consistently good” and “the best.” The former might not amaze quite as often as the latter, but you can reasonably expect the whole thing to be of a certain level of quality. To be even more explicit: I think Tales from the Borderlands is the best Telltale game, but it’s not “consistently good” because the first couple episodes weren’t up to the standards of the incredible back half.

Anyway, what I’m getting at is that I was wrong and A New Frontier kinda dropped the ball in this latest installment. 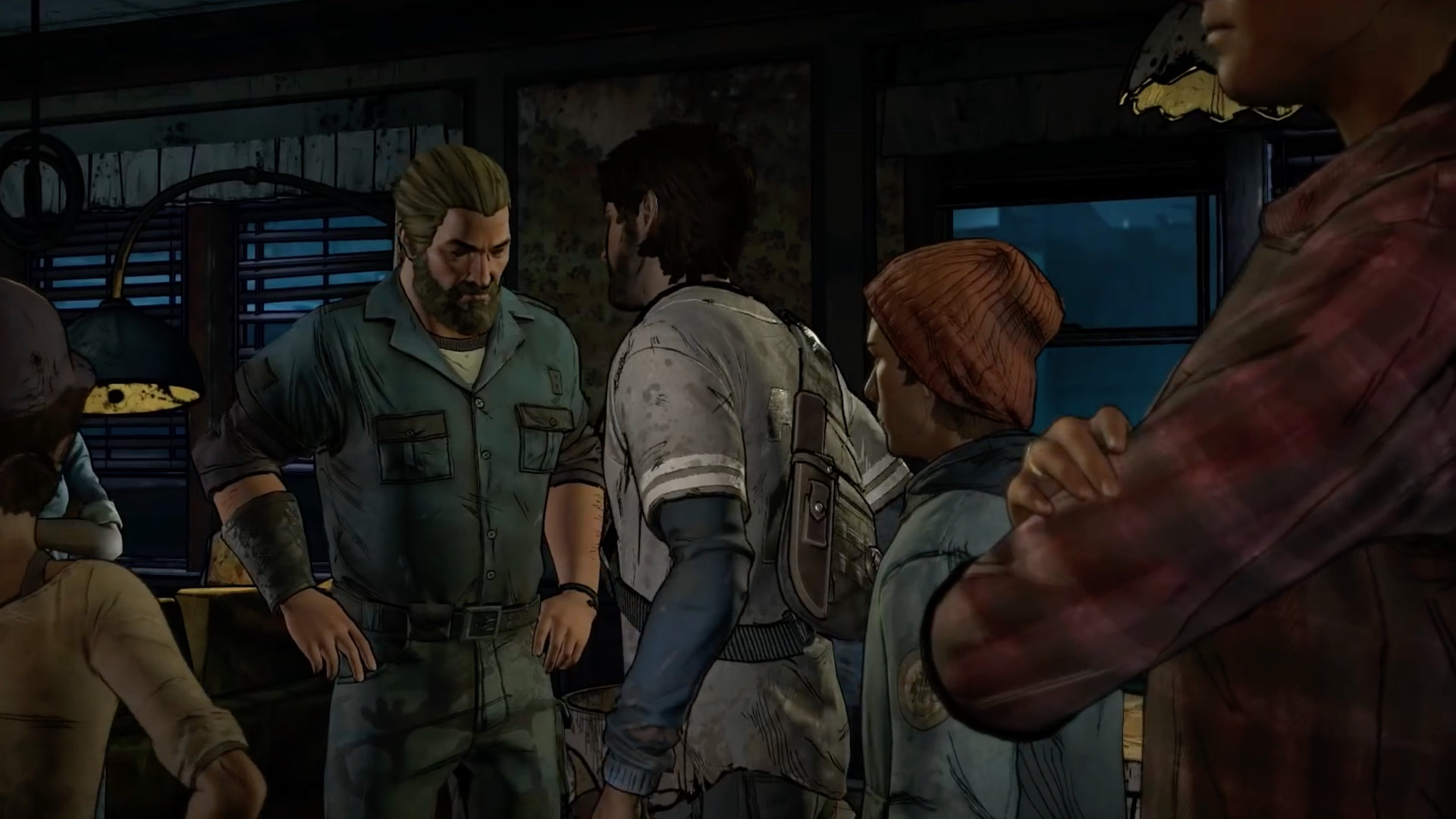 If the main characters get locked in a prison one more god damn time (in this case, the same prison from last episode), I’m going to scream. The opening moments of the present-day action perfectly encapsulate most of my issues with Thicker than Water – there’s a lot of retread and wheel-spinning while everyone sets up for the finale. Nominally, that’s the beauty of episodic storytelling; you can dedicate a whole installment to playing around with the characters at the expense of forward momentum. But that only works if you really dig into what makes these people tick.

I’ve praised the characters of A New Frontier many times before in these reviews, but that’s because each previous episode had some form of character development. I’m not implying that Thicker than Water completely lets down its protagonists, but everyone feels less dynamic than in previous installments. In fairness, there are shades of growth in this episode: like Clementine’s first period. That’s a great hook for an apocalypse story! Clem had to grow up unreasonably fast, but she’s only just now going through puberty. She knows this “bleeding” is normal, but not more beyond that. She never had time to learn.

I’m not saying this character has to be exclusively defined by her femininity, but if the game has Javi suggest that Kate should give Clem “the talk,” why can’t we see these two characters – who’ve never interacted before – go a little outside their comfort zone? We don’t even need to see all of that conversation (it would be weird to have Javi there for the whole thing) but even a sliver of that uncomfortable moment would let Kate and Clem bounce off each other a little bit. Instead, the whole thing happens offscreen. The dialogue is still very good, which makes this all the more disappointing.

The other characters aren’t immune to this either. Gabe jumps between hotheaded teen and reasonable young man, often making his scenes feel incongruous. Mood swings are one thing, but it feels more like his entire motivation changes from scene-to-scene. Joan is little more than a cackling despot, and Javi feels more passive than he’s ever been. There’s also a big character blow-up moment that – to the best of my knowledge – shouldn’t actually be a surprise to anyone involved, and yet it’s one of the major catalysts heading into the climax. It all feels a little rote, like Telltale is just hitting beats they’re aware they should be hitting, but without the lead-up to those big moments.

My beloved flashbacks aren’t safe either. The scene in question this month, where Javi and David visit some pre-apocalypse batting cages, sets up David’s feelings of inadequacy and his desire to return to the army. So, based on the past few episodes and flashback structure in general, you would think David’s feelings would play a part in Thicker than Water, right? Nope. David spends a good 90% of this episode on the bench, and when he does make a move, it’s because he’s just the same angry man he’s been this whole season. It’s a flashback that only exists because the rest of the episodes had a flashback.

With five episodes to your average Telltale series, there’s not enough real estate to have a “breather episode.” Thicker than Water doesn’t push any characters to major revelations nor bring major story threads to the fore…aside from the climax, because this is a middling Telltale episode so interesting things only happen in the last 20 minutes. Across the rest of my time with the episode, I saw maybe two important conversations take place. Are we honestly not past the “petty squabbles” stage of this season? The finale is where every plot thread and character moment should come to a head, so the penultimate episode should make the stakes absolutely clear on every possible level.

Remember the fourth episode of The Walking Dead Season One? Everything the characters had been through up to that point informed the events of the episode, as the story hit natural peaks and valleys. Characters grew organically, and there were several moments of emotional release. What about the fourth episode of Tales from the Borderlands? That episode was an incredibly fun heist full of memorable scenes, like the kickass opening montage, the finger gun battle, and Scooter’s death. Both episodes moved the plot forward, continued developing the characters, and set the stage for the finale.

Look, Thicker than Water does an acceptable job of illuminating the path forward, but considering the finale looks to be little more than the now-standard “they find a safe place, uh-oh it’s not so safe!” storyline this entire franchise has been recycling for years now, I can’t imagine we’ll see anything exciting. We’re at the “zombies have breached the safe zone” part, so I’d say we’ve got one or two major deaths left and then a sad ending. Maybe the player will even be able to influence what happens! 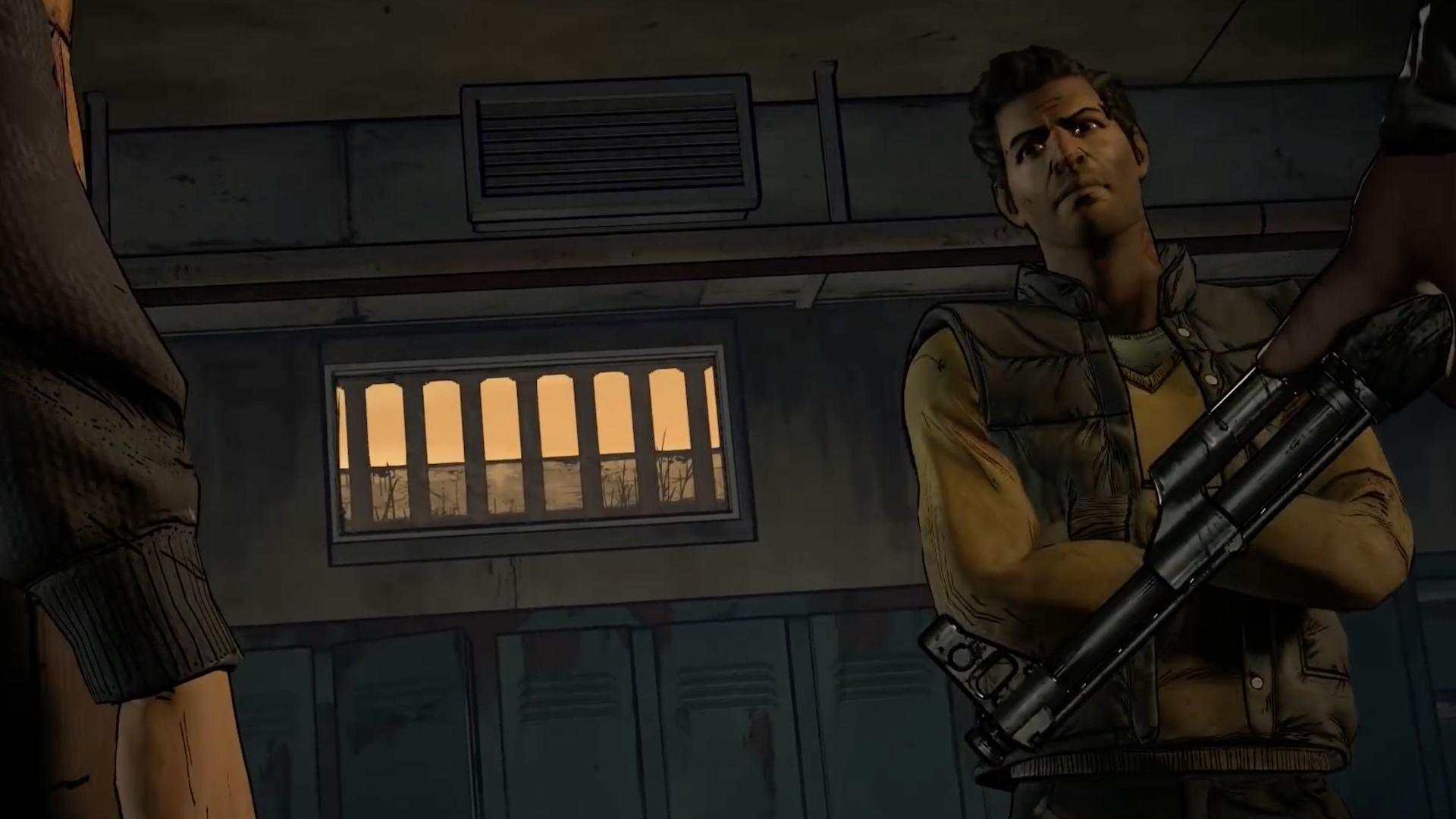 Yeah, there’s a big moment in this episode that feels like Telltale fully wrenching control from the player, and it sucks. I get that’s how these episodes have always worked, but having seen both ways the climax can play out, it feels cheap. Many years ago, one of my friends, incensed by Lee’s death in Season One even after his arm was cut off, semi-facetiously pointed out the many examples of severing a limb preventing zombie infection in the Walking Dead comics and TV show. He ended the post with “So, fuck you, I made the right decision.” That’s exactly how I felt at the end of Thicker than Water.

And I get it, really I do! Death is inevitable, life is cheap, God is cruel. That’s the theme of The Walking Dead – it’s been consistent across every medium the series has touched. And maybe I’m being worked to hell and back with this, but A) I called it very early into the episode, predicting a major emotional beat that easily takes the wind out of the reveal; and B) it sucks! It cuts off a major storyline at the knees by using the oldest trope in the book, and denies the player the hypothetical scene the entire season has been building towards in favor of the ur-Walking Dead storyline.

The more I write about this episode, the less I like it. I actually went back and replayed it to see if the ending could be influenced by the player in any way (it can’t), which certainly did Thicker than Water no favors. One disappointing episode isn’t enough to write off the whole season quite yet, but I’m certainly less excited for the finale than I was this time last month.