As a multi-media franchise, The Walking Dead is at its best when the overarching tale of survival against the undead and/or the murderous community de jour is working in conjunction with smaller, compelling stories of regular people in an irregular situation. That’s why a lot of The Walking Dead –  again, as a whole –  doesn’t really work: either the macro story is rote and overpowering or the micro story follows a group of unlikable pests.

(See also: the second season of Telltale’s The Walking Dead)

So far, The Walking Dead: A New Frontier has done a great job of subverting the pitfalls you’d normally expect from this series. But even if this was another Carver situation, with another evil settlement lead by a guy who doesn’t shut up about “what it takes to survive,” A New Frontier would still manage to succeed on the strength of its characters. These people have a depth and consistency you don’t often see from horror protagonists, let alone video game characters.

There’s still plenty of time for everything to fall apart, but we’re three episodes in. Maybe it’s safe. Right now, A New Frontier might end up being the most consistently good thing Telltale has released since, well, The Walking Dead season one. 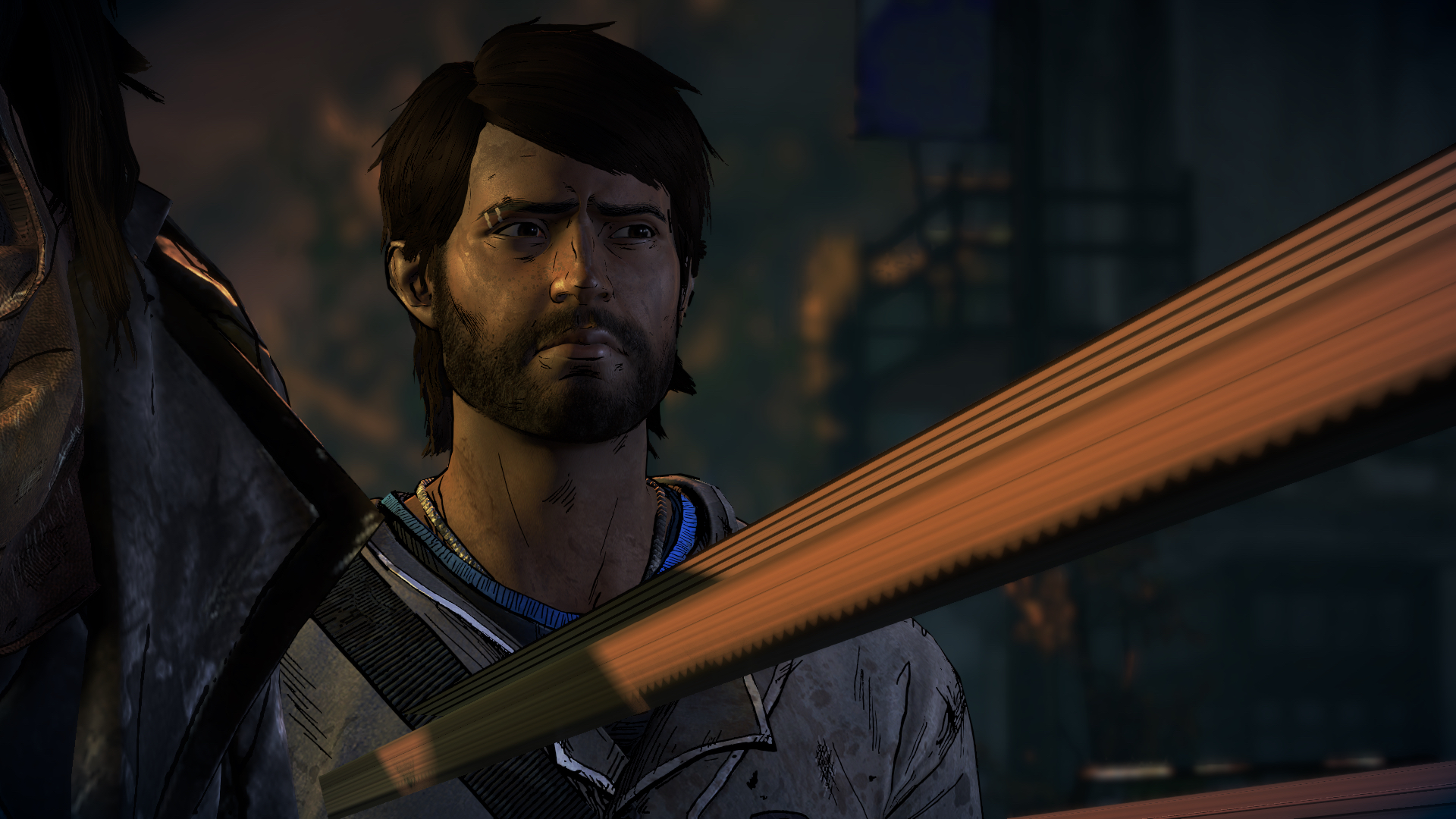 Above the Law picks up where Ties that Bind left off…more or less. There’s another flashback opening, and like the previous episodes, it does an excellent job of setting up the episode’s themes and showing how the main characters grew into the people we’ve gotten to know over the past 4-odd hours. This is how you do flashback structure properly; you can have your exposition without sacrificing character work. You can explain how Javi and his family hit the road and set up Gabe’s idealistic relationship with David, his (still-living) father.

Oh, yeah, hey, Javi’s brother/Gabe’s dad/Kate’s husband is still alive! In hindsight, it’s an obvious twist. Javi was slowly beginning to assume his brother’s role in the family, acting as a father figure to his nephew Gabe and a love interest for his sister-in-law Kate. Pulling the rug out by revealing that, actually, that role didn’t need to be filled is a simple and effective way to create drama. Now, the impact may be lessened if you held back and tried to not replace David. That’s just part of the gamble when it comes to player-driven narratives. But man, even knowing that, I fell right into Telltale’s trap. I did not like David one bit, based on those flashbacks. I started parenting his kids. I talked about him in the past tense. I kissed his wife. Even having to replay the premiere (again, because my save file was somehow missing) knowing that David was alive and well, I did it all the same.

That, if nothing else, is Above the Law‘s greatest weakness. David is an abusive, violent jerk, and I never saw fit to side with him on anything. I planned to ditch him at every opportunity. I suppose that might say more about me than it does the game –  my ambivalent stance on the nature of “family” is well-documented, so I didn’t really buy into the idea that I should side with David “because he’s family.” In my personal life, I don’t feel the need to maintain a relationship with bad people, especially if they’re blood related. I know not everyone will share this opinion, but anecdotally I’ve seen younger people move away from the idea that family is something innate and permanent. It’s worth noting, is all. 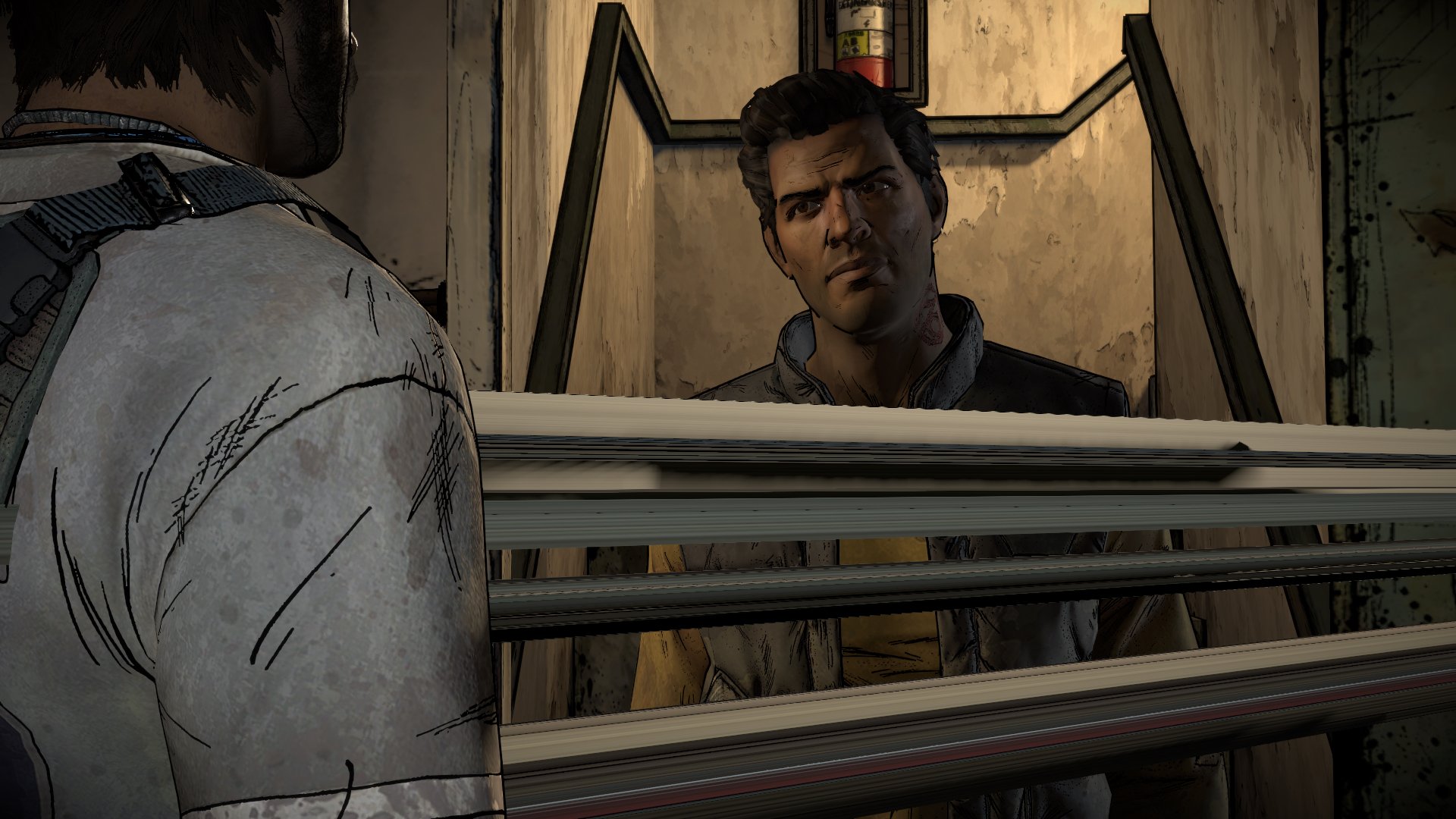 Aside from David (and Eleanor, who doesn’t really get much to do in this episode), the returning characters are just as interesting as before. Tripp is much more than just a Kenny clone, in that he’s ready to apologize almost immediately after getting a little hot-headed. Jesus is the coolest guy to ever wear a beanie and a duster simultaneously. Kate is understandably hesitant about returning to an unhappy marriage she assumed was long-dead. There are a lot of unsaid words percolating beneath the surface of these characters, which makes for some damn fine dramatic tension.

Clementine might be the star of the ensemble once again, however. Her flashbacks are playable, so I guess you could say that she’s technically a player character. But since we know exactly where she ended up, it doesn’t feel like your choices will make any difference, which makes those sequences feel more informative than outright tense. That’s fine, because Clem really shines as a non-playable character. She knows more than she’s letting on, but it feels like she isn’t sharing information because she wants to forget her time in the New Frontier, rather than holding out on the main characters to create artificial tension. Even though Clem has well and truly given up on trusting new people, her relationship with my Javi is right on the cusp of heartwarming. She’s immediately relevant to the plot and serves as a sort of twisted moral center to Javi, constantly telling him “you can’t trust anyone” even if her actions don’t quite match the things she says. Rather than feeling contradictory, it’s more like she’s finally thawing after meeting good people for the first time in a long time. It’s an interesting subversion of her relationship with Lee in the first season.

Javi is still a fantastic protagonist, and a great example of how to give players authorship over a player character without making the character feel like a cipher. All of Javi’s decisions stem from his desire to protect those close to him, whether that be Kate and Gabe exclusively, the whole Garcia family (including David), or everyone he’s met on his travels. Instead of choosing shades of ruthlessness, player choice mostly centers around which characters you want to look out for. In a game where every side character is proactive and likable, with understandable motivations, that can often make for some tough decisions. I wish Jesus liked me more, for example. He’s so dreamy. 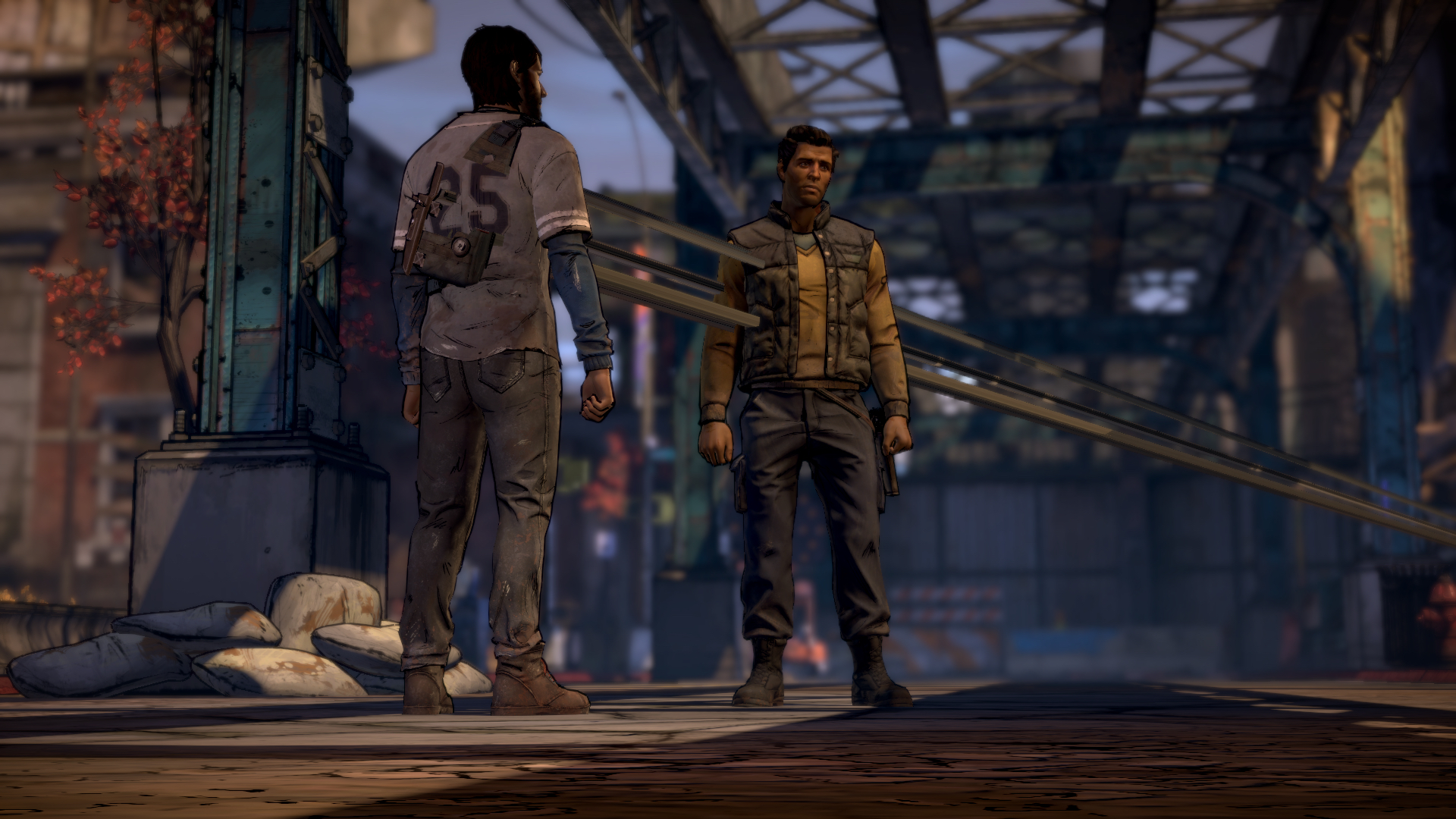 Thankfully, Above the Law gives all of these characters something interesting to do. Everyone has converged at Richmond, which is a safe zone taken over by David’s group, the New Frontier. Since the New Frontier spent the last two episodes murdering and pillaging, the gang is understandably hesitant to leap into bed with these people. That helps keep things interesting – we already know these people are bad news on some level, so the game instead places an emphasis on the politics and backstabbing within the New Frontier rather than trying to hide the group’s brutality. Yeah, they’re still all about “whatever it takes to survive,” as I’m sure you gathered from the scene where they annihilated Prescott. But there’s definitely more grey than you might expect from this situation, especially considering how many times we’ve seen the “evil community” story play out in this particular franchise.

I’ll say this: every time the game dropped a new twist on me, I sat up a little straighter. There’s nothing mindblowing in this episode, but every plot point has some basis in previously established information. You can see the game build towards something, but the storytelling isn’t so predictable that you can see exactly where everything is going. So far, A New Frontier has done a great job escalating character dynamics to the point where there’s a Hitchcockian “gun under the table” for practically every story thread.

Even though the new Telltale engine is a major, major step up, with more dynamic visuals and significantly less janky animation, A New Frontier could still use some work on the technical end. Like I mentioned earlier, the game ate my save file. There weren’t any Steam Cloud shenanigans, since this was the same computer I used to play the first and second episode. I honestly don’t get what the deal is with me. I think I must have some kind of EMP field that kills save files for review games (see also: Risen 3, Ghost Recon Wildlands). It wasn’t that big of a deal here, since I only really lost 4 hours, but it’s definitely worth noting. 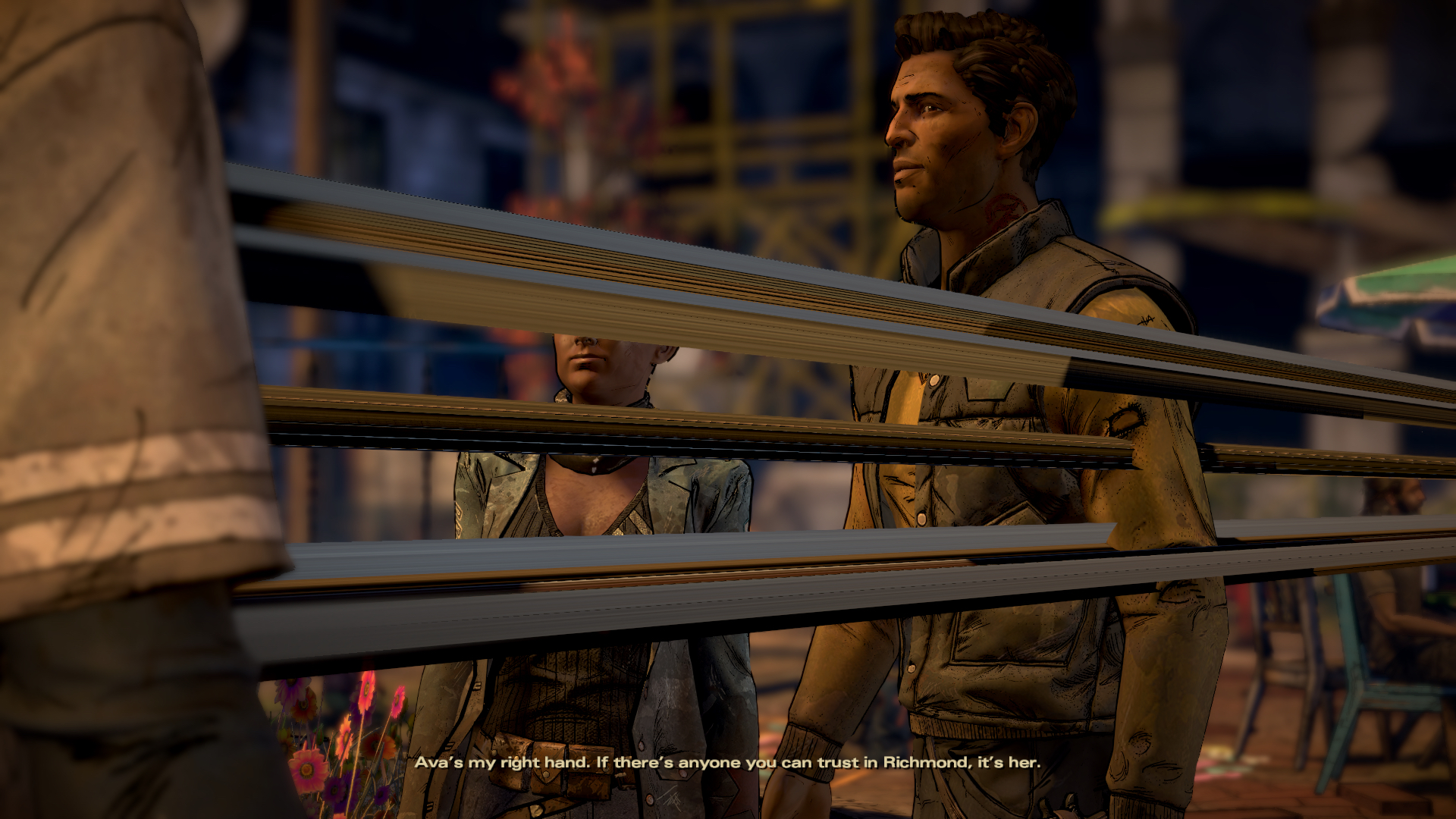 Oh yeah, also, Javi’s backpack texture exploded through his chest during the first hour of the game, making him look like a malfunctioning T-1000 being sucked into a black hole. That’s why all my screenshots in this review look weird – they’re all captures I took. I don’t think I’ve ever seen a glitch like this in a major release, especially one this absolutely hilarious. It went away on its own eventually, but man was it distracting at first.

Jank aside, Above the Law really is a great Walking Dead episode. Fans of the series like to give Telltale props for reinventing player choice, and that’s a well-deserved accolade. You don’t get the kind of reaction people had to the first season of Walking Dead unless you can foster a strong connection between player and player character. But I think there’s more to it than that. The Walking Dead was about a man and a girl he adopted through circumstance. A New Frontier is about a man and his family. That, arguably, is what Season Two lacked: a digestible logline you could point to, and I’d like to thank A New Frontier for helping me finally pin that thought down. Sure, you could also reduce Season 2 to one sentence: “Clementine tries to survive amidst a new group,” but that sentence lacks an inherent emotional core. It’s base, to be sure, playing off the inherent fear of death. However, it doesn’t have a recognizable empathy, aside from the last few hours where a newborn just kinda shows up. Like so many Walking Dead villains, Season 2 lacked humanity.

Isn’t that why we gravitate towards stories like these? We look for something we can empathize with; we like it when the relatable is juxtaposed against the fantastic. That concept is the basis of good sci-fi/fantasy/horror storytelling, and A New Frontier understands that more than most video games. I’m invested in the story of the Garcia family. I’m excited to see how their drama plays out amidst the backdrop of the zombie apocalypse. If Above the Law is any indication, the next two episodes are going to be something special.