Several weeks ago, Nintendo released the Switch Lite, a portable only version of its best-selling console. It’s a great piece of hardware, but it does change one of the fundamental aspects of owning a Switch: it turns this social machine into a personal one. The Joy-Con controllers are designed with getting more than just one person engaged with the system and many, many games have been designed with this concept in mind; games that just don’t work as solo experiences.

What I’m trying to say is if you only own a Switch Lite, The Stretchers probably isn’t for you. For anyone with the original hardware, it’s another little gem to add to your collection. 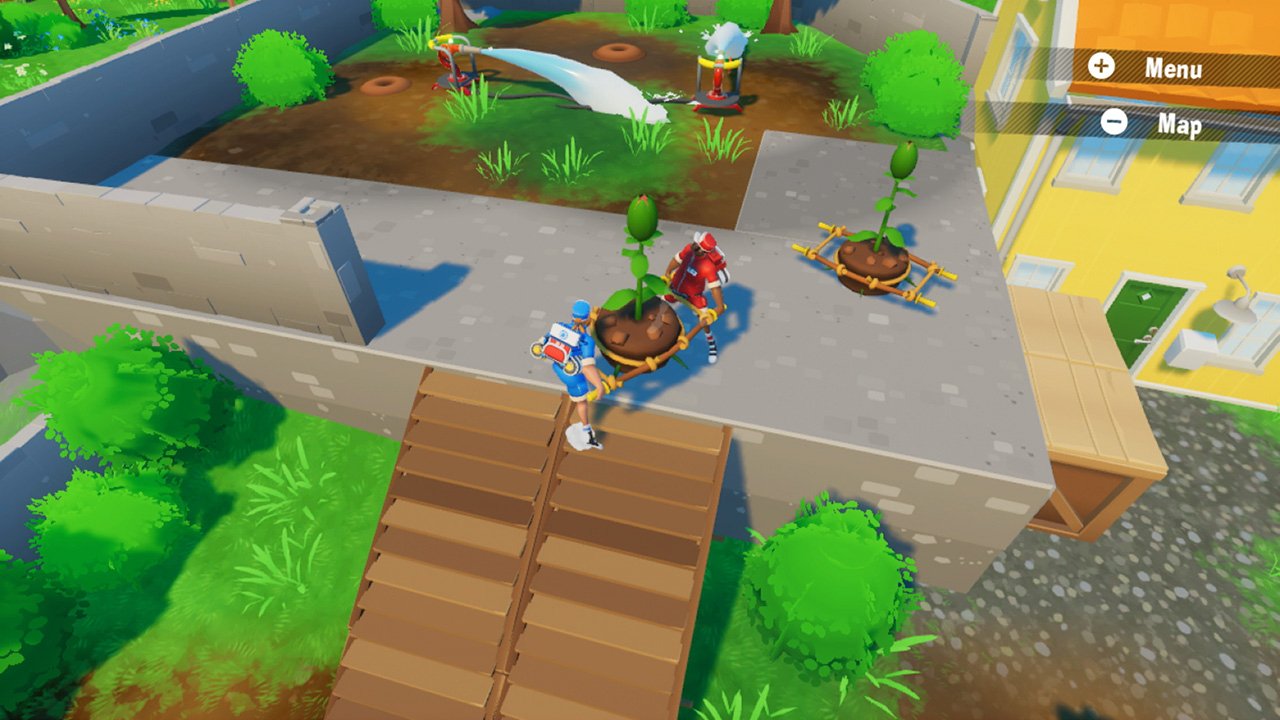 The Greenhorn Islands are in trouble. The amazingly named Captain Brains is affecting people with a case of the Dizzies, rendering them helpless right where they stand, be it in an active sawmill, a farm with rampaging livestock, or a quarry where dynamite is ready to explode. The only way to save them is to take them to a hospital full of hot doctors and the only way to get them from where they are to where they need to be is with the help of some hilarious EMTs.

The Stretchers leans big into comedy as you and a friend pair up to rescue those who fall prey to Captain Brains’s bizarre revenge plan. With a punchy script and plenty of rag-doll physics, it sells itself as a jovial time from the opening moments of the game when, after you create your two paramedics, you’re thrust into your first mission to save some folk down by the farm.

The bulk of The Stretchers‘ campaign is divided into two parts: driving around the islands to your next destination and saving peoples suffering from the Dizzies from a variety of different puzzle-heavy locations. Driving around the Greenhorn Islands is great fun and the arcade nature of the ambulance controls reminds me of all the quarters I used to pump into the Crazy Taxi machine at the now out-of-business Taxi’s Hamburgers. With plenty of free time between cases, there is ample opportunity to explore the many side-jobs, jumps, and secrets of the map. There are hats and catalogs to be found, and recklessness is encouraged through points and achievements.

When going through it by yourself, the player has full control of their ambulance’s functions. In co-op, those functions are divided between the players with the person in the driver’s seat controlling steering, acceleration, and braking while the passenger gets to mess around with the various upgrades of the vehicle. In co-op, getting several of the achievements can be a coordinated effort as you and your partner will have to time your functions of the ambulance perfectly to hit a jump just right or make it cleanly through a hoop. If you screw up, it’s no big deal and honestly, it’s part of the fun.

Far more coordination is required during the rescue portions of the game. You and your partner will be tasked with locating every patient suffering from the Dizzies at the specified location and load them into your ambulance. You can work as a team and load them quickly onto your stretcher or carry them one by one. As you progress further into the game, you’ll face more challenges during these sections including grating gophers, two-person lawnmowers that can be tricky to maneuver, and pigs that look to knock you off your feet. The faster you complete each mission, the more points you receive. After a certain point in the game, all missions can be replayed with secret objectives unlocked for each one.

While driving around the islands can be entertaining as a solo venture, the same can’t be said for the rescue missions or side-jobs you take. When playing alone, you still have to control both EMTs independently with the two Joy-Con thumbsticks. There is a follow button you can press so the second paramedic will follow around the first, but it doesn’t always work right and the A.I. in this game is often brain dead. I was able to do a good chunk of the missions by myself — using the stretcher is quite easy to do without a co-op partner — but it was a more methodical and calculated approach to the challenges. With a friend, my experience was more carefree even if we weren’t totally coordinated.

In reality, for the hour or so I enjoyed the game with a friend, we were on the same page for most every mission. However, the fickle nature of the controls kept us from completing these missions as quickly as possible. Positioning your EMT in the exact position you need them to be in to grab the exact item or part of the item you’re trying to grab can be tricky. As the amount of items littered in each rescue area builds, we found ourselves often having to slightly adjust our position a few times to grab what it was we were trying to grab. Most of the time this isn’t an issue, but when we lost points because our character grabbed the wrong spot on a box and was hit by a flying fish, it became a bit of a frustration.

But honestly, that’s a frustration worth enduring because of how amusing experience this can be. While I wouldn’t say the single-player option is an afterthought, it’s quite evident The Stretchers is made to be played with another person. Or even a group of people as you gather around the telly to find out which of your friends are really in sync with one another. That’s when it’s at its best; so grab a friend, split those Joy-Con, and try not to lose your cool when the two of you can’t seem to figure out how to mow a lawn together.