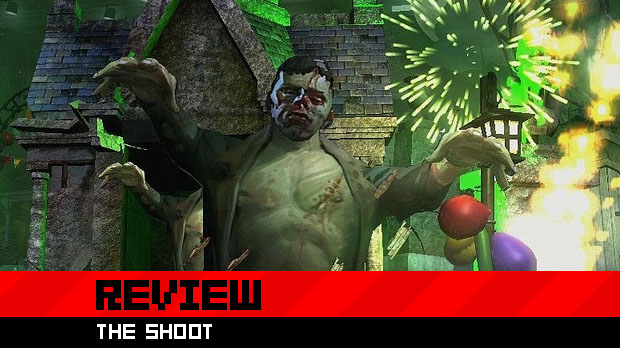 If there’s one thing The Shoot does really well, it’s make the player wish that each level was its own videogame. The artistic style is just so fantastic that levels feel like they would have been an awesome title in its own right, and if reviews were based on aesthetic alone, The Shoot would be an award winner.

Now if only it could get that whole “gameplay” thing down perfectly, this would be a most excellent game indeed. It’s a shame we don’t base reviews on aesthetic alone. 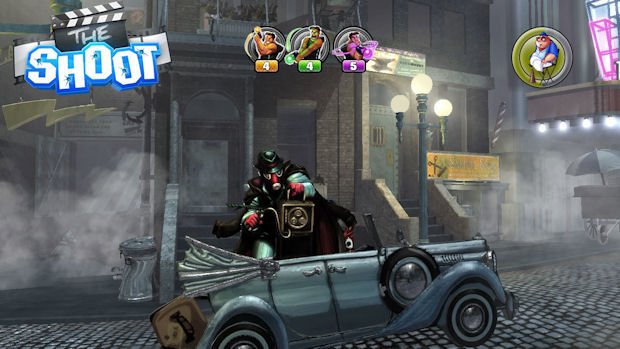 The Shoot tosses you into a film studio backlot and charges you with the task of producing thrilling action sequences for a temperamental director. Your enemies are family-friendly cardboard cutouts of villains, allowing for maximum dismemberment with minimum parental outrage. In fact, if the enemies weren’t cutouts, this would be an incredibly violent, grotesque game.

With unlimited ammo and no reloads, the focus is on accuracy rather than House of the Dead style chaos. Chaining together successful shots to earn special moves is the key to gaining points and keeping the director happy. Getting hit by wayward enemy projectiles or shooting “friendly” targets makes the director angry. Anger him enough and he’ll cut the shoot, thus costing a life.

The Shoot has a fantastic style and a great premise. Each of the game’s four levels (with four stages per level) are themed around a specific movie. Cowboys, deep sea battles, zombies and (my personal favorite) gas-masked mobsters all star in their own unique movies with terrific music and wonderful enemy designs that really do deserve to be made into genuine characters as opposed to cardboard targets. 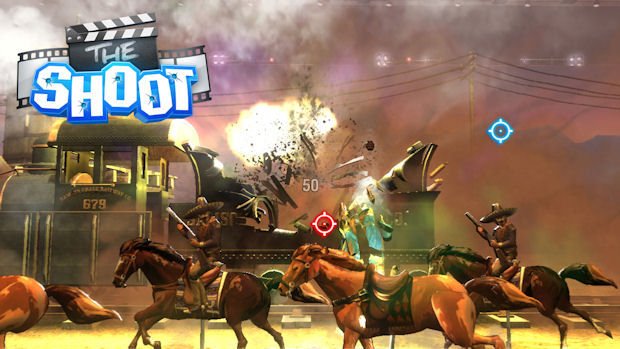 Unfortunately, this great sense of character and style is the only thing The Shoot really has going for it. The general shooting is decent enough, but fails to impress on any level. This isn’t helped by a laggy targeting reticule that suffers from unreliable hit detection. The game’s special moves are also all broken in their own special way.

The first special is Showtime, which slows the game down. Showtime is activated by physically spinning your entire body around. The game’s tutorial says that you can simply spin the controller around your head like a lasso as well, but this is a lie. That tactic works less than 50% of the time. The controller also has a nasty habit of needing to re-calibrate itself after you’ve spun around. It’s easy to miss shots when the targeting reticule jerks across the screen after a spin, and in a game that rewards accuracy, that’s not a good idea.

The Shockwave attack is equally broken. In order to activate Shockwave, you need to point the controller downward and shoot, which will clear all enemies onscreen. Unfortunately, the Shockwave will activate even if you shoot at enemies near the bottom of the screen, whether you planned for it to or not. If you have the camera at eye level, this isn’t as big an issue, but I have nowhere to put a camera at eye level when standing which basically means that every Shockwave I earn is wasted within seconds. Since you can’t sit down because of the Showtime move, this basically means the game cannot be played properly either while sitting or standing. 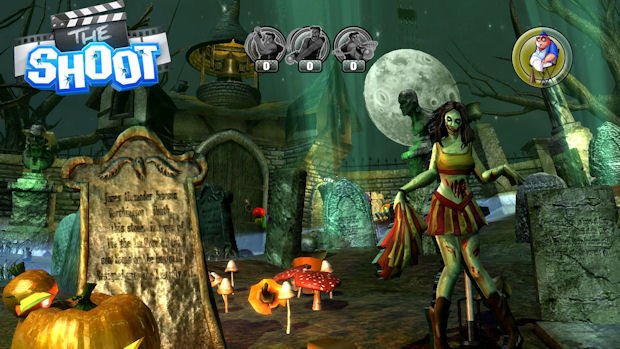 Would it have killed Cohort Studios to have included optional button commands for these moves? Apparently it was too important to get people spinning around the room like an idiot, but this desire to force awkward waggle input on the player has come at the cost of the game operating correctly. It’s bad enough that you have to reclaim your own bearings after spinning around in a game that demands player accuracy, but when the PlayStation Move itself can’t handle the interface, there’s a serious problem.

Other gesture-based controls include slashing the Move in order to pistol whip close enemies, but since it’s much easier and more efficient to shoot them, it’s rather useless. You can also sway left and right to avoid projectiles, or duck to take cover. These actions are successful sometimes.

The third and final special move is the Rampage attack, which bestows rapid-fire upon the player and temporarily removes penalties for missing targets. It’s not very good, however, thanks to the aforementioned lag, which means that you’ll sweep your Move across the screen and somehow manage to hit less than half of the things you were aiming at.

All these issues are compounded (or perhaps saved) by the fact that the game is incredibly short. The four levels or broken into four “scenes” but each scene lasts a matter of minutes. The game attempts a number of disingenuous ways to artificially lengthen the experience, by lacking checkpoints and requiring you to beat a certain score in order to unlock new levels, but even if you’re forced to replay a level or two, the game will be beaten in an afternoon with very little replay value. There are special “challenge” levels, but these need to be unlocked by finding items in the same four levels, which is just another cheap way to get as much mileage out of as little content as possible. 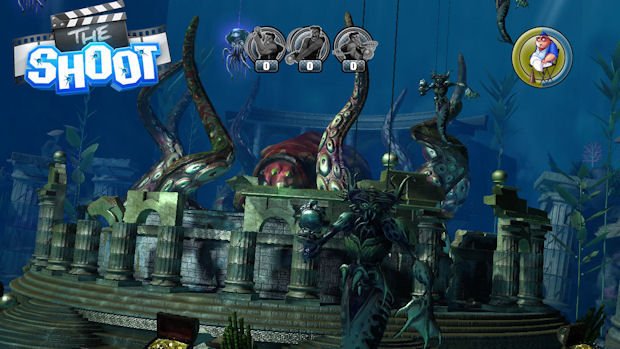 It’s a shame that the gameplay is so tepid and half-baked, because The Shoot‘s raw personality is one of the most appealing I’ve seen all year. It’s a game that really could have been incredible fun if it had tried harder, and it feels like a lot of imagination went completely to waste. I’d pay good money for a real game featuring gas-masked gangsters on jetpacks, and it’s sad that such a delightful concept is shackled to a game that, on the whole, just isn’t very good.

If you’re absolutely desperate for something to justify your PlayStation Move purchase (and you probably are), then The Shoot is as good a game as any to waste even more cash on. You’ll get at least an hour’s worth of play time out of it, and you might even go back for one or two stages. There really isn’t anything this game does, however, that hasn’t been done better, and on far less advanced consoles.