Ninjas. Where would late ’80s entertainment have been without them? In the wake of a string of hit movies showcasing the infamous assassins (usually portrayed by famous Japanese actors such as Franco Nero and Michael Dudikoff), the ninja craze exploded. Not only on the big screen, but in cartoons, comic books and, most notably, in the arcades.

With its mysterious eastern heritage, unique weaponry, and badass martial arts skills, becoming a ninja became the dream vocation of the schoolyard practically overnight, not dissimilar to how everyone wanted to be a fighter pilot after Tom Cruise put shades on and flashed a grin in Top Gun.

Video game developers were quick to cash in on this new fascination, producing great coin-ops such as Shinobi, Shadow Dancer, DragonNinja, Mystic Warriors and Ninja Gaiden, all starring the rooftop-running fellas. 1987 release The Ninja Warriors, by arcade veterans Taito, was one of the most popular titles of this genre. So popular, in fact, that it was remade in 1994 for the Super Nintendo as The Ninja Warriors Again, back when video game remakes weren’t ten a penny.

But today, we’re looking at The Ninja Warriors‘ second remaster. Developed by Natsume – who recently polished up another 1994 release, Wild Guns – The Ninja Saviors: Return of the Warriors gives a new generation of wannabes the opportunity to dish out shuriken-assisted life-ectomies to seemingly insurmountable odds. 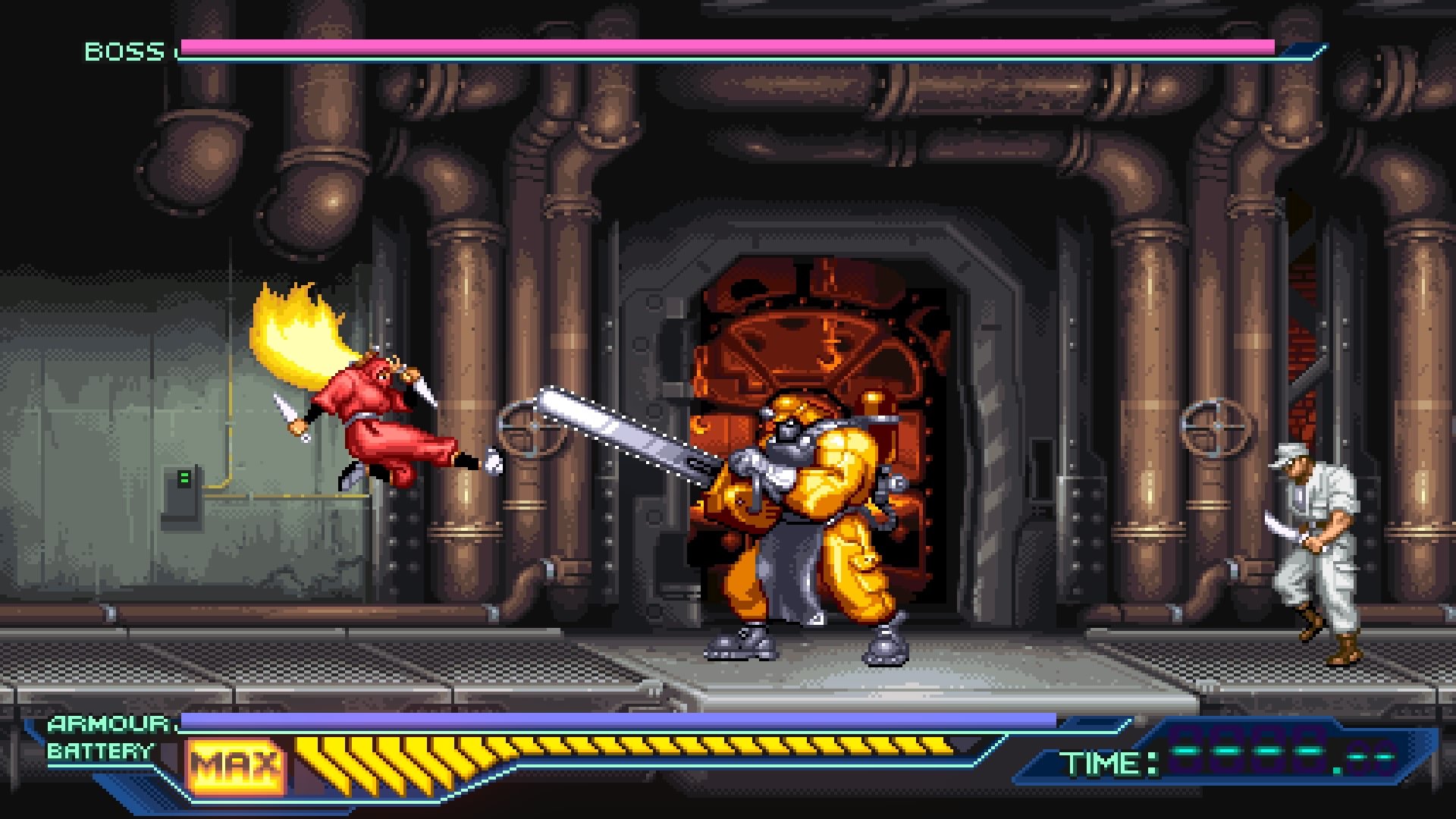 Set in the far off future of 1993, the world is dying under the smothering rule of a megalomaniacal U.S. President, who has declared martial law in order to hold the planet and its people in his iron grasp. With society perched on the brink of complete collapse, a small resistance outfit, led by the scientist Mulk, create a team of cyborg ninjas in a final do-or-die bid for freedom.

Equipped with expert martial arts knowledge, as well as blend of traditional and high-tech weaponry, the ninjas are programmed to take the fight to the President, defeat his army, smash his regime, and end his reign of tyranny. These high-kicking bots are humanity’s last and only hope. They are The Ninja Saviors.

Ninja Saviors: Return of the Warriors is a remake of both the 1987 arcade and 1994 SNES release, which captures the design and gameplay of the original titles, constructed within a new engine to allow for slicker and more responsive gameplay. One or two players can pick from a team of unique characters, each with their own weapons and attacks, and then make their way through seven stages of action, patrolling a 2D plane and carving up the myriad enemies and boss characters that stand between them, President Banglar, and the game’s amusingly “philosophical” ending.

A tough title back in its heyday, Ninja Saviors still presents quite the challenge in 2019, with players only given one life and health pickups few and far between. Fortunately, each character is versed in a selection of unique skills, from melee attacks and grabs, to acrobatic air maneuvers and a range of specials – powered by an ever-charging “battery” meter. While at first glance gameplay seems a little slow-paced, dedicated players will soon find that it’s in the clever combining of these attacks that our psycho cyborgs can move quickly and efficiently around the screen, using throws, dash attacks, and even juggles to swiftly eliminate the opposition.

Where gameplay comes into its own, without a shadow of a doubt, is in two-player mode, allowing players to clear out enemies quicker, and use smart teamwork to perform extended combos, ripping up tougher baddies in double-quick time. Two brand new characters, Raiden and Yaksha, are particularly well-designed for this, and are two of the most enjoyable saviors to control, no doubt due to them being created with a modern approach to game design. It’s a shame that these characters have to be unlocked, as I feel more would be gained from allowing people to hit up The Ninja Saviors‘ tough campaign with this pairing from the off.

It can’t be denied that in single-player there is a limited longevity to The Ninja Saviors, but this particular release does place emphasis on its speedrun potential. Every stage can be revisited in isolation once defeated, with the entire campaign only recording your time should you complete the run in a single life. Thus, die-hard fans will get a kick out of replaying their favourite stages to shave off those precious seconds, but tackling the might of the game in one go proves a momentous task for sure. For the majority of players, a couple of playthroughs with a few unique characters is mostly all that is on offer here. 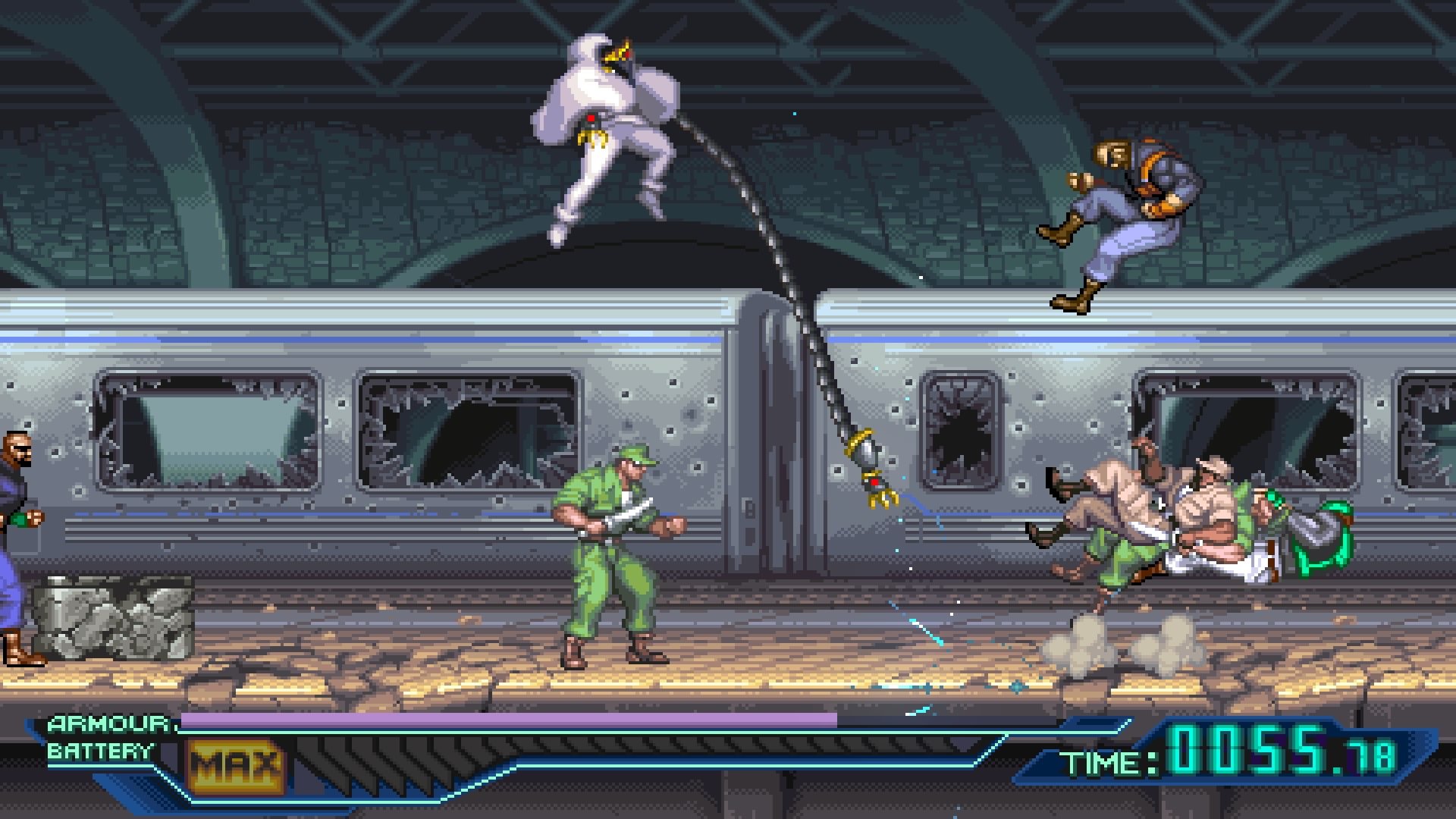 From an audio/visual standpoint, The Ninja Saviors delivers the delights of a bygone age with just a pinch of modernism. Great-looking sprites, fluid animation (particularly for our heroes) and detailed backgrounds recall a golden era of console gaming, and while the remixed soundtrack is great, it’s fortunate that the original score (one of Taito’s best and most memorable) is unlockable, as is the OST for the SNES release.

There is some missed opportunity here. Given the brand’s history, it’s disappointing to not have a gallery, which could have included concept images, box art and advertising from all three titles. There is also no online co-op option (local play only). Still, the extra characters, multiple OSTs, and option to change the blood to red (a legit controversy at the time) are all nice additions. At $20, Ninja Saviors also doesn’t break the bank, offering a fistful of two-player retro fun, and perfect for a typical Switch commute. Though it should be noted that the similarly-themed Capcom Beat ‘Em Up Bundle offers far more bang for your buck.