The game is afoot

Deduction and logic are at the heart of a good Ace Attorney case, and especially in The Great Ace Attorney Chronicles. Each one has its own rise and fall, building up from a prelude and initial investigation into sometimes massive webs of conspiracy, with all secrets laid to bare in the midst of a courtroom battle.

The Ace Attorney series marks its 20th anniversary this year, stretching back to the first Phoenix Wright: Ace Attorney hitting the Game Boy Advance in Japan in 2001. And though North America has seen the mainline entries make their way over onto various platforms, the side games have been a different story.

The Great Ace Attorney Chronicles brings over both of the Great Ace Attorney games, localizing two spin-offs that not only put the focus on a new cast of characters rather than Phoenix and the gang, but take place in an entirely different era too. It’s an all-new setting that takes advantage of its time period, historical potential, and even a bit of fiction to create an Ace Attorney duology that is, simply put, fantastic. 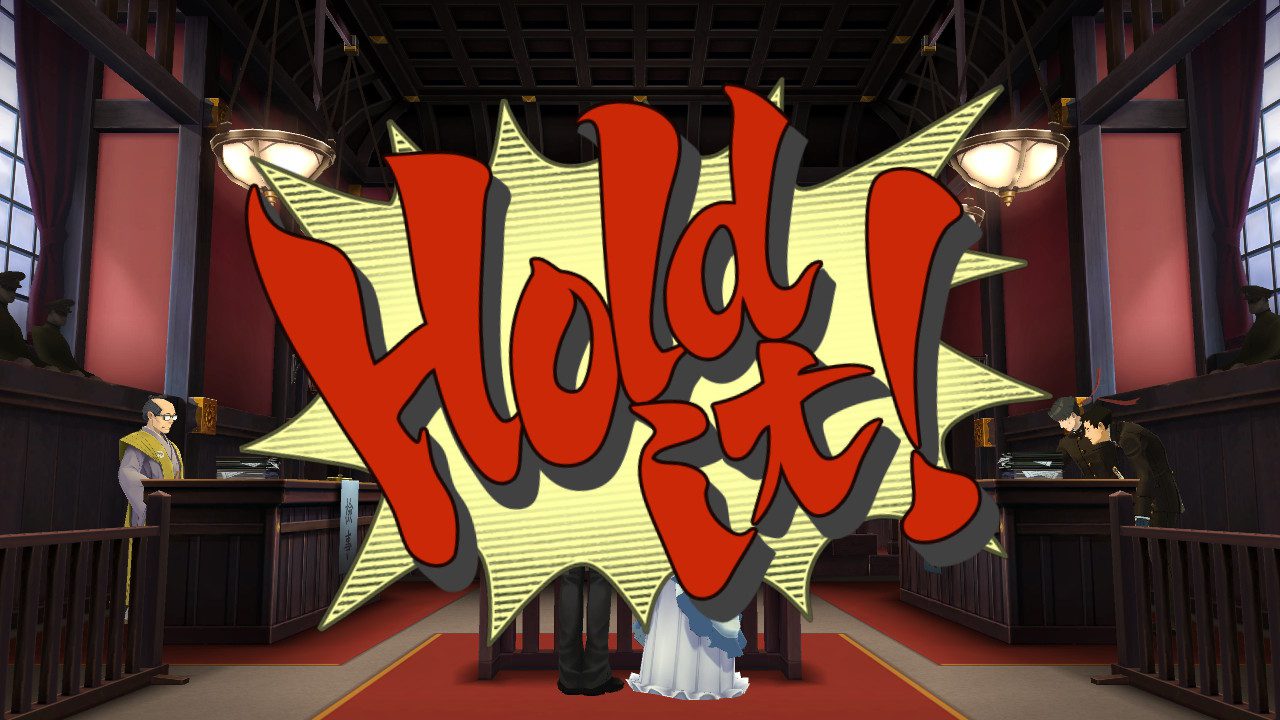 Set during the late 19th century, as the international relationship between Great Britain and Japan sits precariously atop a new treaty, The Great Ace Attorney Chronicles follows the travels and tribulations of accused-turned-law student Ryunosuke Naruhodo and judicial assistant Susato Mikitoba. As the pair leave Japan and set sail for Great Britain alongside their mutual friend Kazuma Asogi to get some hands-on law study in a global center of innovation, they quickly find themselves mired in international politics and uncovering conspiracies stretching back for years.

Joining them is a cast of characters that, true to Ace Attorney games prior, is full of odd, quirky, eccentric people trying to make ends meet in London. Most notable among them is Herlock Sholmes, who is essentially Sherlock Holmes but renamed for copyright reasons. Herlock and his partner Iris Wilson quickly become regulars and part of the crew, and in Herlock’s case, heavily play into the investigation side of things. We’ll get to that in a little bit.

A frequent face across the courtroom from Naruhodo during both games’ trials is Lord Barok van Zieks, a British prosecutor who’s also whispered to be the “Reaper of the Bailey.” He seems to hold a grudge against Naruhodo and all Japanese, and he stands as an intimidating opponent that nevertheless endears himself to you over the course of the duology. He’s just so expressive and imposing, punctuating his objections with the pouring of a wine glass or the flick of a bottle, it’s hard not to love him, even when he’s completely destroying your arguments. 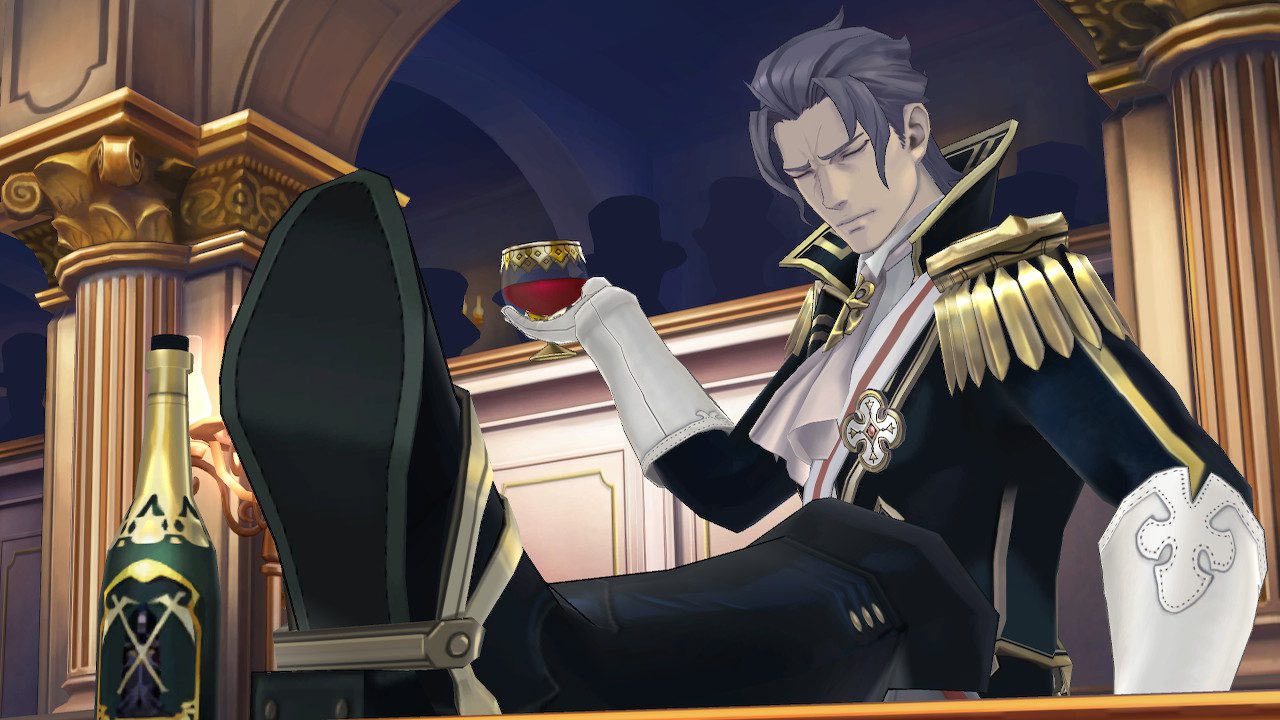 Other highlights include some trial characters that slowly ingratiate themselves with the main cast, like Inspector Gregson and the orphaned pickpocket Gina Lestrade. Even the individual trial characters, the culprits and suspects who come and go, have their memorable personality quirks and designs. Ace Attorney games usually have pretty eccentric casts, and The Great Ace Attorney Chronicles is no exception.

The way these stories play out is also fantastic. Pairing the two Great Ace Attorney games together makes sense, just to bring both over and offer a pretty sizable amount of Ace Attorney in a single package, alongside a good amount of concept art and extras. But these games flow extremely well together; both within each entry, dubbed Adventures and Resolve, and between the two. Every trial builds up on the mountain of mysteries that Naruhodo and pals are slowly picking apart, until by the end, you’re discovering huge twists that could change a nation. Alone, they’re good; paired together, they’re great.

The trials are very solid, with a few in particular already taking a spot in my all-time series favorites. (Resolve’s third case, if you’re curious.) They all have a very natural flow to them, with the action rising and falling very well. I did still run into a few moments where I was working a few steps ahead of where the story wanted me to be, logically, but that’s ultimately part of what I think makes The Great Ace Attorney Chronicles work so well.

What’s interesting about The Great Ace Attorney Chronicles‘ trials are how you get to the truth, and also how you prove it, beyond a reasonable doubt, as the truth. Good mystery games have fun, interesting, twisting webs of story to unravel, but The Great Ace Attorney Chronicles frequently makes a point to have Naruhodo, and you, prove that something is the only possible solution. The time period also means there aren’t as many modern forensic tools available, or they’re only just starting to become commonplace. This results in some really great a-ha moments and logical headscratchers, where you’re trying to discern just how a hypothesis you’ve posited is what really happened. 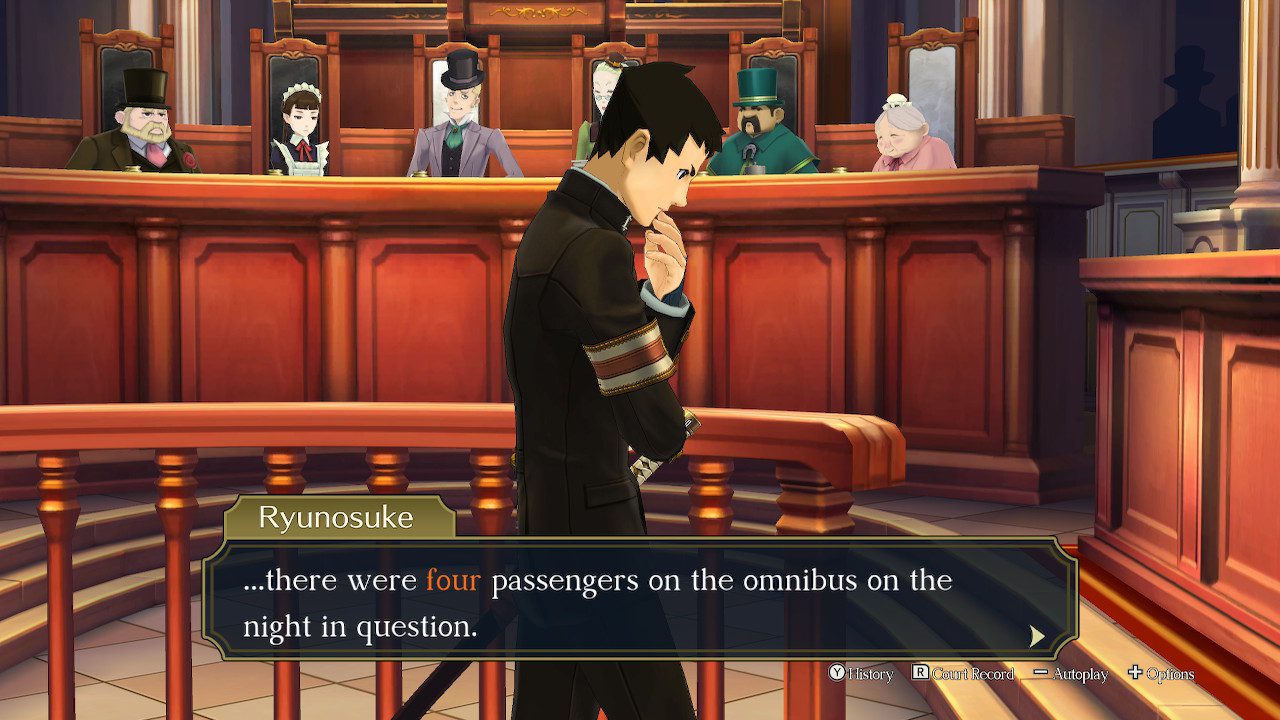 Summation Examination is one of the ways this best manifests in some of the cases. Trials taking place in Great Britain have a jury, and have a unique twist: each juror can, at any point in the trial, decide they’ve heard enough and declare for either Guilty or Not Guilty. If the jury unanimously declares a Guilty verdict, Naruhodo can start a Summation Examination, where he has to pit juror’s arguments for why they think the accused is guilty against each other.

These segments serve as good segues between major trial revelations, but they’re also pretty interesting in that they demand a lot of pressing and reasoning, rather than presenting evidence to contradict statements. The focus is put on finding ways in which jurors’ differing views on a matter highlight lingering contradictions in the trial, and uncovering them feels really rewarding.

This sort of logical reasoning also shows up in the Dance of Deduction, which takes place during the out-of-trial Investigation sections. Here, Herlock Sholmes will make a grand deduction, snapping around the room and spotlighting different things he’s noticed, and how they indicate some greater truth. 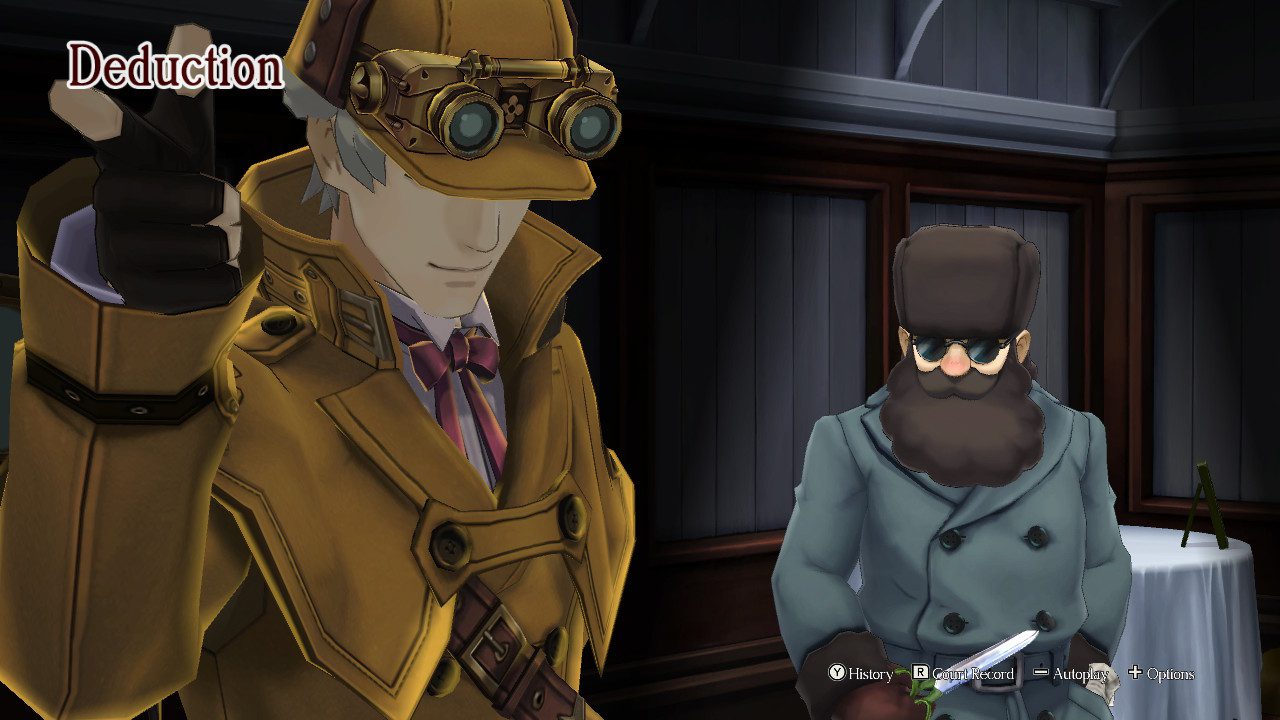 The problem is, Herlock isn’t always exactly on point, and so Naruhodo has to step in to clear things up. It plays out as an observation game, where you have to examine the angles from which Herlock is observing different pieces of information and find the real piece of evidence he noticed. A worried glance towards one corner of the room might not have been towards a flyer for the circus, for example, but towards a different item on the same table.

These deductions aren’t all too difficult, as it’s usually a case of just noticing the one thing slightly awry in the scene, but they do a lot to break up the Investigation phase and add a little more interaction into them. Rather than the usual point-and-click search through an area, these Dances of Deduction involve viewing the scene from new angles, and usually unveil some interesting truths about the supporting characters.

Both the Deductions and Summation Examinations are really strong additions to the tried-and-true Ace Attorney formula. They blend in naturally with the gameplay, use a lot of the same verbiage as the regular investigation or cross-examination sections, and really emphasize Naruhodo’s growing ability to deduce and discover the truth behind these situations. 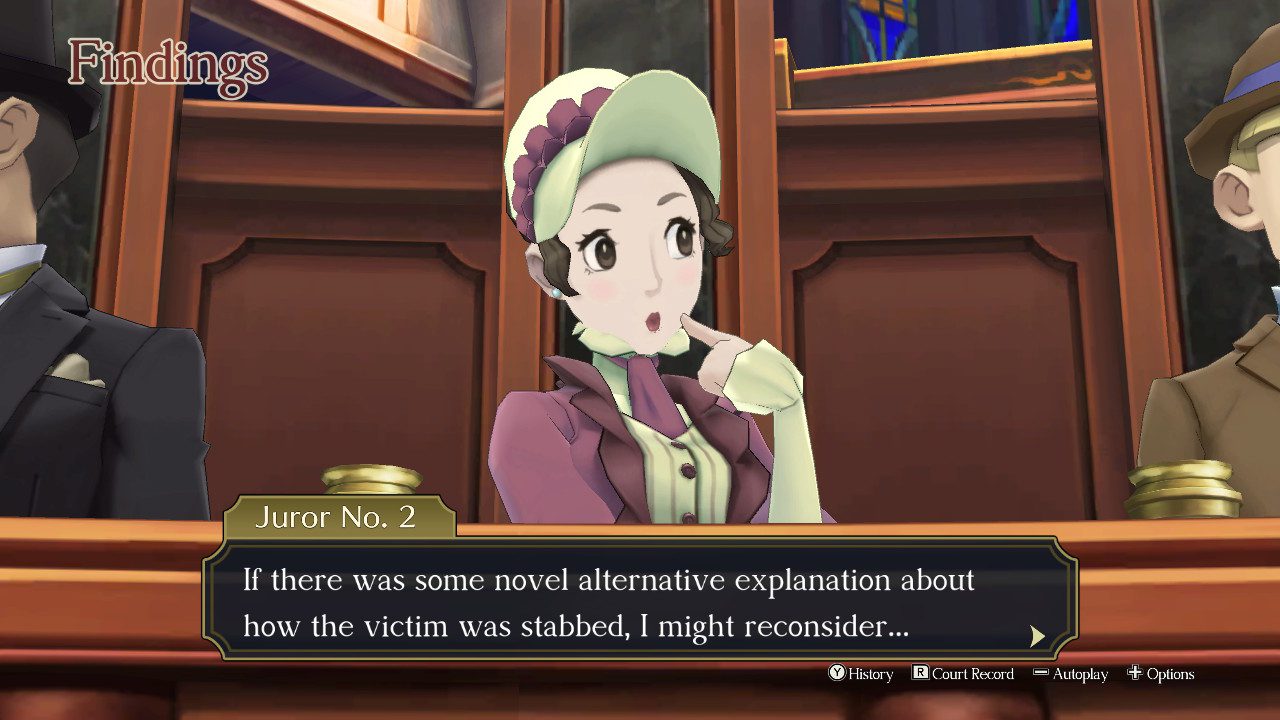 In fact, a lot of what makes Ace Attorney a great series is on display here. The music is absolutely stellar; I’ve always felt the Ace Attorney doesn’t get enough credit for its music, and the sweeping string accompaniments in The Great Ace Attorney Chronicles really work well to highlight the drama and intensity of big revelations.

In terms of cinematics, the first game Adventures has a few animated cutscenes to accompany big story book-ends, while Resolve utilizes seemingly in-engine scenes. The jumping around in visual styles isn’t bad—The Great Ace Attorney Chronicles as a whole looks really good on the Switch—but it does feel a bit jarring. Between those, and the occasional intro from Wilson that frames the coming trial as a Sholmes story in the making, the visual presentation shifts around a bit between games, but never too much to its detriment.

There are also cases where I had to poke around a crime scene for a while, or try and figure out which characters needed to still be talked to or shown something to tick the box for the story to progress forward. These moments will probably feel familiar to Ace Attorney fans, and they’re not deal-breakers by any stretch, but it is something for newcomers to be mindful about. There will be moments where the right point to break through takes some thinking and shifting your perspective, but I never felt any solution was too difficult to work out. 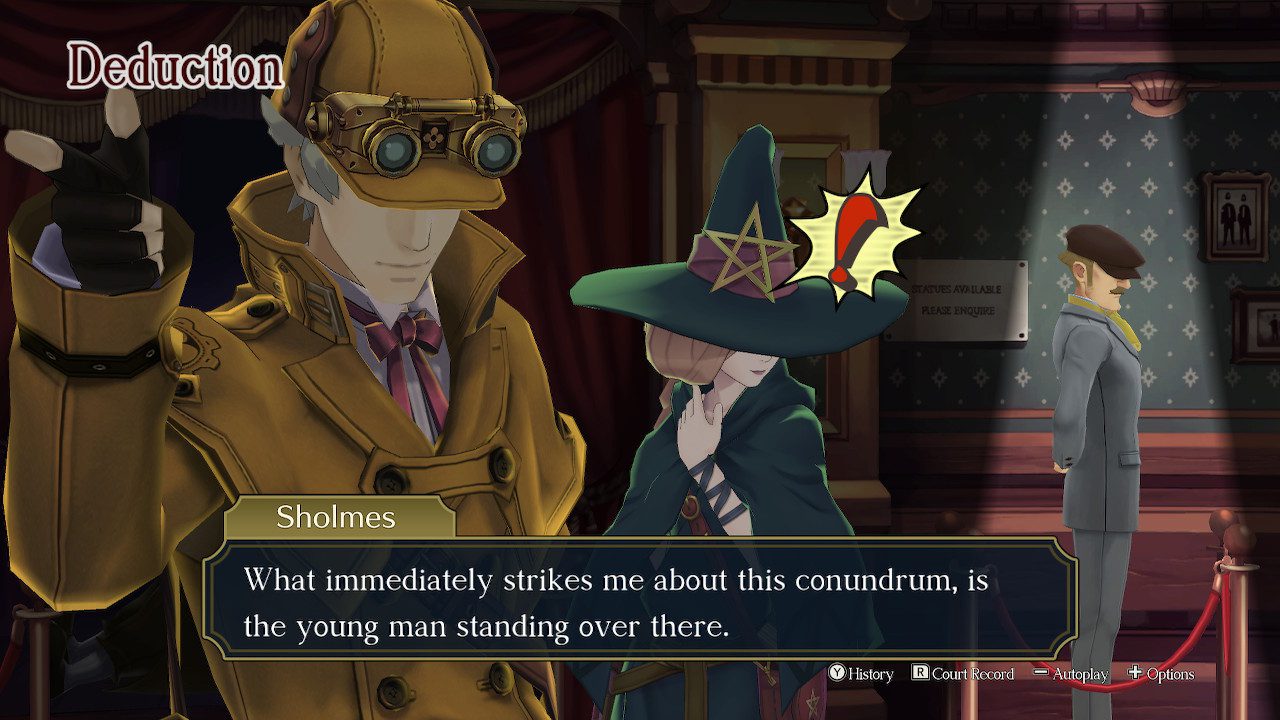 That said, this is also the Ace Attorney game I would absolutely, wholeheartedly recommend to anyone trying to get into the series. I enjoy the adventures of Phoenix Wright a lot (and the original trilogy has its own collection as well), but if you want something newer and the idea of a good detective story running alongside the courtroom drama is appealing, The Great Ace Attorney Chronicles fits the bill beautifully.

The Great Ace Attorney Chronicles as a unified duology really captures everything that draws players into this series in the first place. It’s got big reveals and turnabouts, clever use of examinations and deductions, and a cast littered with memorable, endearing characters. Naruhodo’s journey through the legal system of London is one that’s been a series highlight. It’s nice to finally have these games in the West, as both a great onboarding point for newcomers and a nice treat for Ace Attorney fans. No objections here.