Last April, the popular Flash platforming series The Fancy Pants Adventures received a home console installment for XBLA and PSN. For some reason, despite our hyping said game extensively, no one at Destructoid ever actually reviewed it. The people gotta know, man! The people gotta knoooooow!

Just over ten months later, the console version has been ported to iOS devices. Aside from the absence of the multiplayer modes, the two are pretty much identical. So I guess now would be as good a time as any to do a proper review, right? 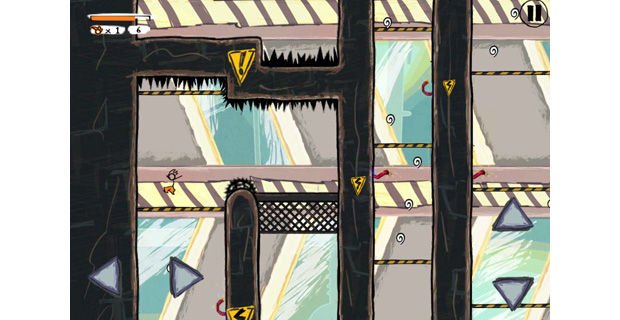 The Fancy Pants Adventures is the kind of game Sonic the Hedgehog wishes it could be again — a solid, momentum-based, 2D platformer that offers players the option of blazing through a level with style and finesse or slowing down and mining for secrets. Every stage is a playground replete with rolling hills, half-pipes, quarter-pipes, springs, scalable walls, and tons of collectible baubles called Squiggles, and you dispose of enemies by hopping on their noggin or rolling into them. Plus, there are no insufferable sidekicks or on-rails nonsense.

Depending on how fast you are running and which direction button you holding after you launch off a ramp, you can reach any number of distances and elevations — getting to that gold star or bonus door often requires a few attempts to find that “sweet spot.” Once airborne, you have just the slightest freedom over course correction, guided as you are by momentum yet allowed just enough control. It’s easy to get frustrated in the beginning, but little by little, you learn to master the game’s nuances.

Still, you aren’t completely bound by physics. Some slopes grow steeper and steeper until you are running up a vertical wall, then the surface curves even more and you are running along the ceiling as though you are wearing magnetic boots. You can even slide across the surface of water for short periods of time. These stylish sections are fun rewards after a particularly harrowing obstacle, yet the game thankfully never devolves into a roller coaster ride that places style over practicality. 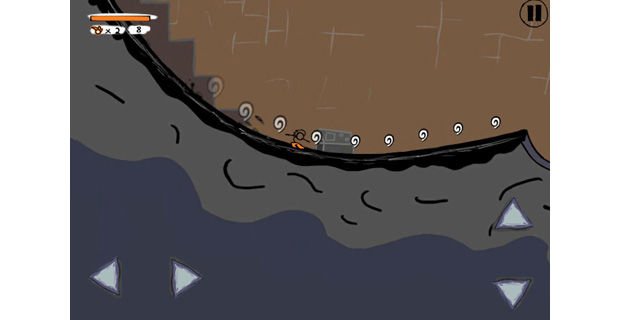 This style extends to the ambience as well. Your hero, Fancy Pants Man, rocks a bitchin’ pair of flare pants; over the course of the game, you can collect over 140 items for avatar customization, including even more outrageous pants, hats, hairstyles, and goofy weapons like a giant fork or a dead parrot. The environment itself is rendered as the kind of doodles that a middle schooler would squeeze in the corner of his or her notebook, while the soundtrack is a nice mix of chill tunes and surf rock jams. It’s all, like, very mellow, man.

I mentioned already that you can breeze through levels quickly, but you can greatly extend your play time by shooting for 100% completion. In addition to collecting all the Squiggles and stars in a stage, you can also find hidden challenge rooms, where you are tasked with completing a race within a time limit, racking points in parkour-like events, or collecting a number of a certain item. These challenges are the hardest parts of the game and often demand several retries, but it’s the kind of difficulty that makes you feel all warm and gooey inside once you’ve succeeded.

The story mode, in which you must stop a band of pirates from making your sister their new pirate princess, consists of 11 levels. Beyond that, you can play slightly updated versions of “World 1” and “World 2,” the original two Flash games. Then there is the Fancy Arcade, in which you can go for the gold by attempting several challenges from the the main game with stricter requirements, in addition to several new challenges. Add that to the oodles of unlockable costume items, and you’ve got a hefty adventure with hours of content. 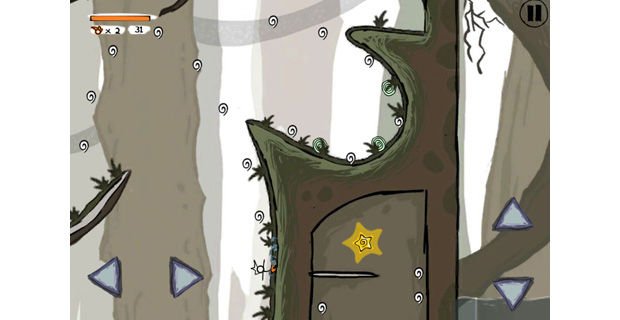 But not all is gravy in The Fancy Pants Adventures. Swimming segments are a chore — controls are extra sensitive underwater, so it’s difficult to make just the slightest of turns without veering wildly off in different direction. Then there is your weapon, which you don’t acquire until late in the game. It’s cool to see FPM swinging his pencil / wooden sword / lightsaber / whatever-the-hell-custom-skin-you’ve-applied like a little ninja, but it’s only really useful against very few enemies (i.e., other ninjas). Most baddies are better dispatched using the same stomping or rolling techniques you’ve been using since the beginning.

Worst of all (and this ought to come as no surprise) are the touch controls — the left and right buttons especially give me no small amount of heartache. If my thumb is placed slightly on the left edge of the right button, it’s registered as a “left.” If I try to overcompensate and reach further out to the right, nothing is registered at all. From the moment I started playing to the moment I finished, I would frequently find myself in a situation where I meant to go right but wound up going the other way. Not even the colored pencil doodles and smooth guitar riffs can cool my rage when I’m forced yet again to climb back up a set of platforms because I missed the game’s improperly sized and placed hitboxes.

The hitbox issues aren’t limited to play controls, either. Text links as well as the arrows and buttons in the Fancy Arcade are so damn tiny that I wonder if this game was made for the dude with the tiny hands in that one Burger King commercial. My fingers and thumbs aren’t that fat. There’s no reason why I should be jamming the screen repeatedly because an arrow is the size of a pinprick. Maybe this isn’t an issue on an iPad, but on an iPhone, an otherwise wonderful game is marred because I am not Salad Fingers. 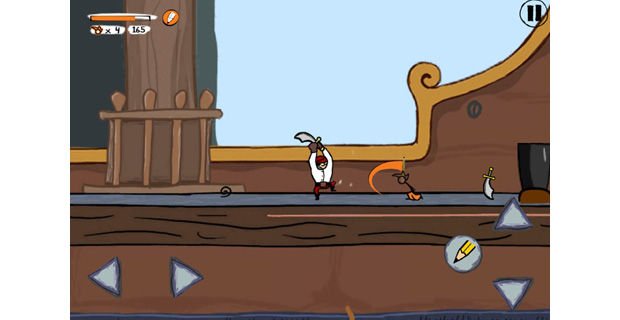 Still, this iOS port is just as beefy as its console counterpart, only it’s a full $9 cheaper. The multiplayer modes were sacrificed, but this is a single-player game first and foremost, anyway. If you consider yourself a patient player, hop aboard the Apple caboose and get all fancy and stuff.

Ultimately, The Fancy Pants Adventures is a chill, stylish platformer that is both fulfilling and satisfying… when its touch controls aren’t giving you the business. If you can get over that really, really, really obstinate roadblock, you’ll be just dandy.