As a general rule, licensed games tend to be poorly made, slapdash affairs looking to cash in on a brand rather than build upon it. Game development is a business first and foremost, after all, so why bother creating a superior product for an established brand when an inferior one will sell just as well?

As cynical as that sounds, however, there is always cause for hope. Every so often, a movie tie-in manages to exceed expectations and become a worthy piece of entertainment in its own right. Is The Expendables 2 Videogame one of those precious few pleasant surprises? Nope. Not in the slightest. 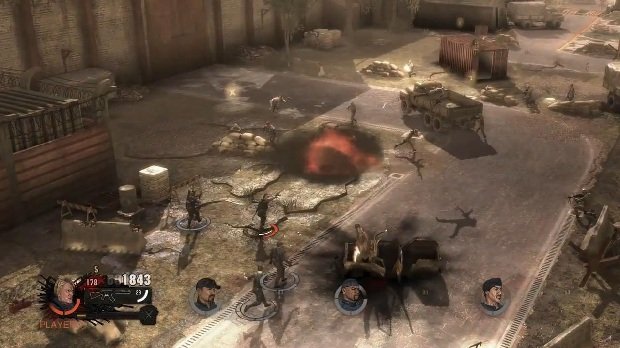 Set pieces, explosions, celebrity voice talent — every day it seems like more and more games are looking to imitate big-budget Hollywood action movies. It’s a trend I’m not terribly fond of, but if any game had to do it, one based off Stallone’s action-heavy The Expendables franchise seems fairly appropriate. Unfortunately, it stumbles out of the starting gate by omitting a key ingredient that makes those films so appealing in the first place, then goes downhill quickly thereafter.

For a brand that is built on the pedigree of its cast, the game is noticeably lacking in star power. Of the dozen or so action heroes from the movies, only Stallone, Li, Lundgren, and Crews were so kind as to make an appearance. And while that may be disappointing if you’re a fan of Van Damme, Willis, or Statham, the cast (or lack thereof) is honestly the least worrisome aspect of the game. It really wouldn’t be a point of contention in the first place if the game was, you know, any good. Instead, it serves as the first strike of many against a rather banal four-player co-op shooter that’s decided to shortchange fans.

Against a seemingly endless stream of baddies over 20 levels across four chapters, there’s initially a glimmer of hope that the isometric (and sometimes on-rails) shooter will threaten to provide an entertaining (if forgettable) ride. With massive explosions, quippy remarks, and violent signature kills, The Expendables 2 Videogame has all the makings of a summer blockbuster — at least on paper. Unfortunately, it’s not only lacking in the cast, budget, and production values of the films but in execution as well.

Enter the clunky controls. Something of a twin-stick shooter, character movement and direction of fire are mapped are mapped to the right and left analog sticks respectively, which seems all well and good except for the addition of a soft lock-on feature. Initially, this doesn’t seem like an issue, as it concentrates fire on the nearest enemy depending on the direction the analog is tilted towards, but as the game wears on, this becomes more and more problematic. 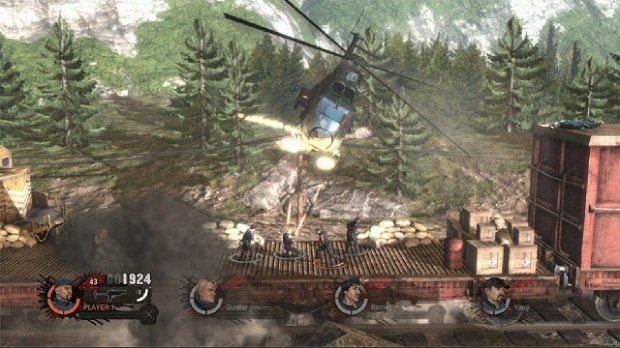 Players will likely lament frequent instances where their character decides to pursue the futile venture of targeting an enemy skulking safely behind a nearby sandbag rather than the snipers and squad of gunners currently in the process of flaying their squadmates. Other times, the last rocket necessary to quickly fell a tank, chopper, or gun emplacement will go careening off towards a recently spawned group of enemies.

Generally, the controls just don’t feel very fluid, which can grow especially frustrating as the “challenge” ramps up. By challenge, I mean an artificially inflated sense of difficulty brought on by a massive number of enemies, who at times seem to spawn indefinitely and take quite a bit of punishment before collapsing. Package that with excessive reload times and guns that feel weak and ineffectual at stemming the tide, and you have a shooter that makes shooting a chore more than anything. 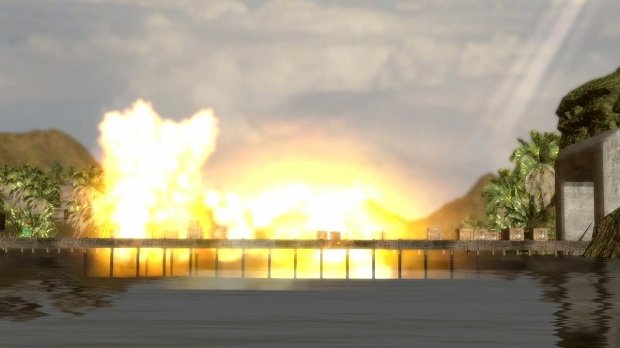 From the borderline offensive voice acting to a barely existent narrative, there are numerous other aspects of the game that leave a lot to be desired. Other gripes include crashes, camera issues, invisible walls, unreachable enemies, and foes who can fire through walls. Something I found equally troubling and hilarious were several occasions where allied characters would stand out in the open and repeatedly take sniper rounds to the chest, get knocked down, stand back up, and welcome more from their far-off assailants.

This is one of the worst games I’ve played in a long time. And it’s not necessarily because of the clunky controls, vapid shooting, or myriad of other issues that are at play here. The Expendables 2 Videogame just isn’t fun. It’s a long and tedious slog through the mud and a thousand enemy corpses, where time is the only thing that separates you from the end credits.