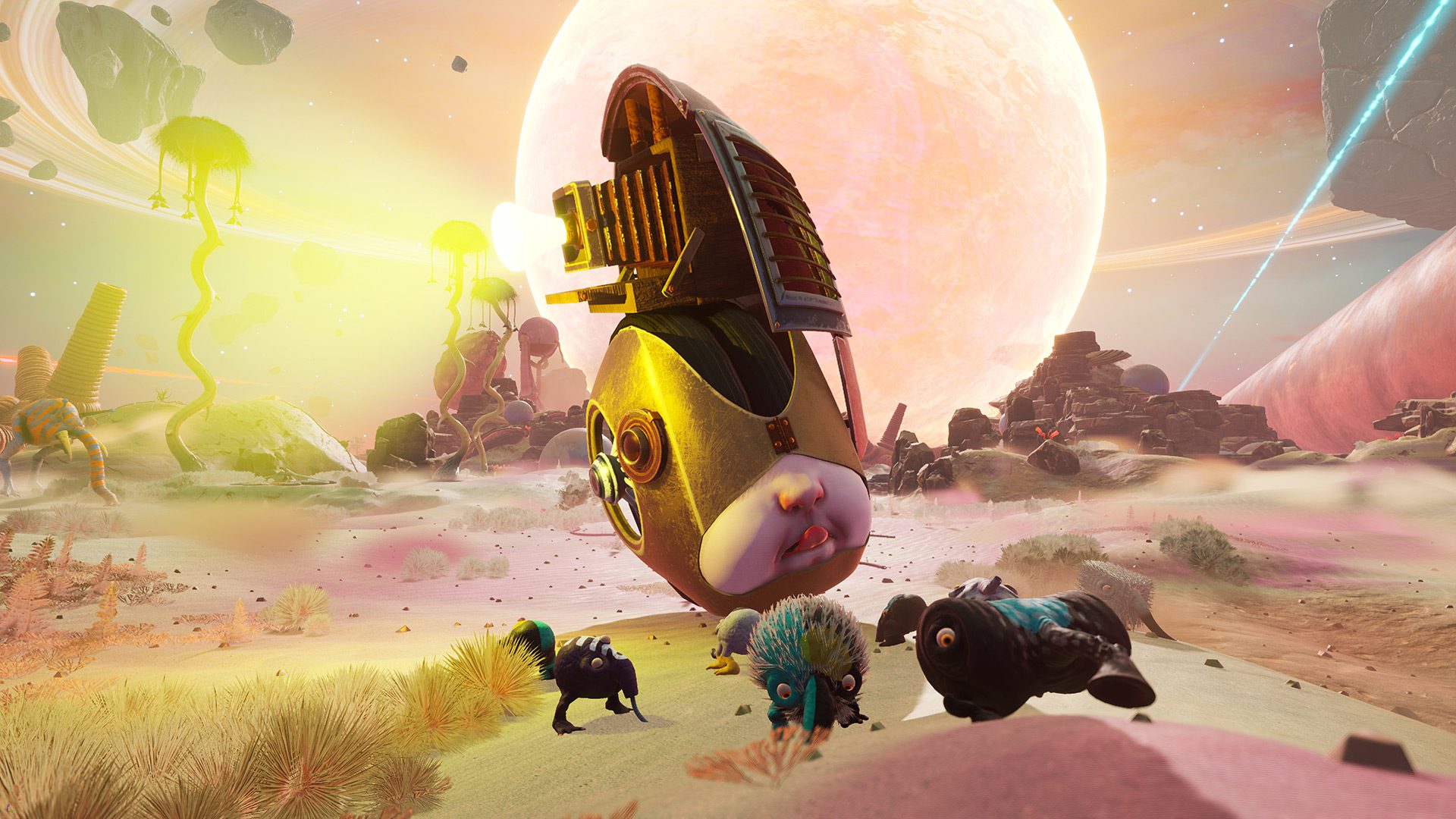 The Eternal Cylinder is a survival adventure game about a pack of morphing alien critters on the run from an endless, ancient, unstoppable force — a literal Cylinder that crushes everything in its path. It can be held back, but only momentarily. It is inevitable.

Given ACE Team’s consistently unique track record, I expected The Eternal Cylinder to be a weird one — these are the same folks who dreamt up Zeno Clash and Rock of Ages, after all. One look at a screenshot, any screenshot, and you know you’re in for a trip.

What I didn’t expect was how much fun it’d be to find my way around this fantastic, grotesque alienscape. I mean, I didn’t come in expecting to have a bad time, I just figured there might be some frustrating moments given all of the genre elements in play. 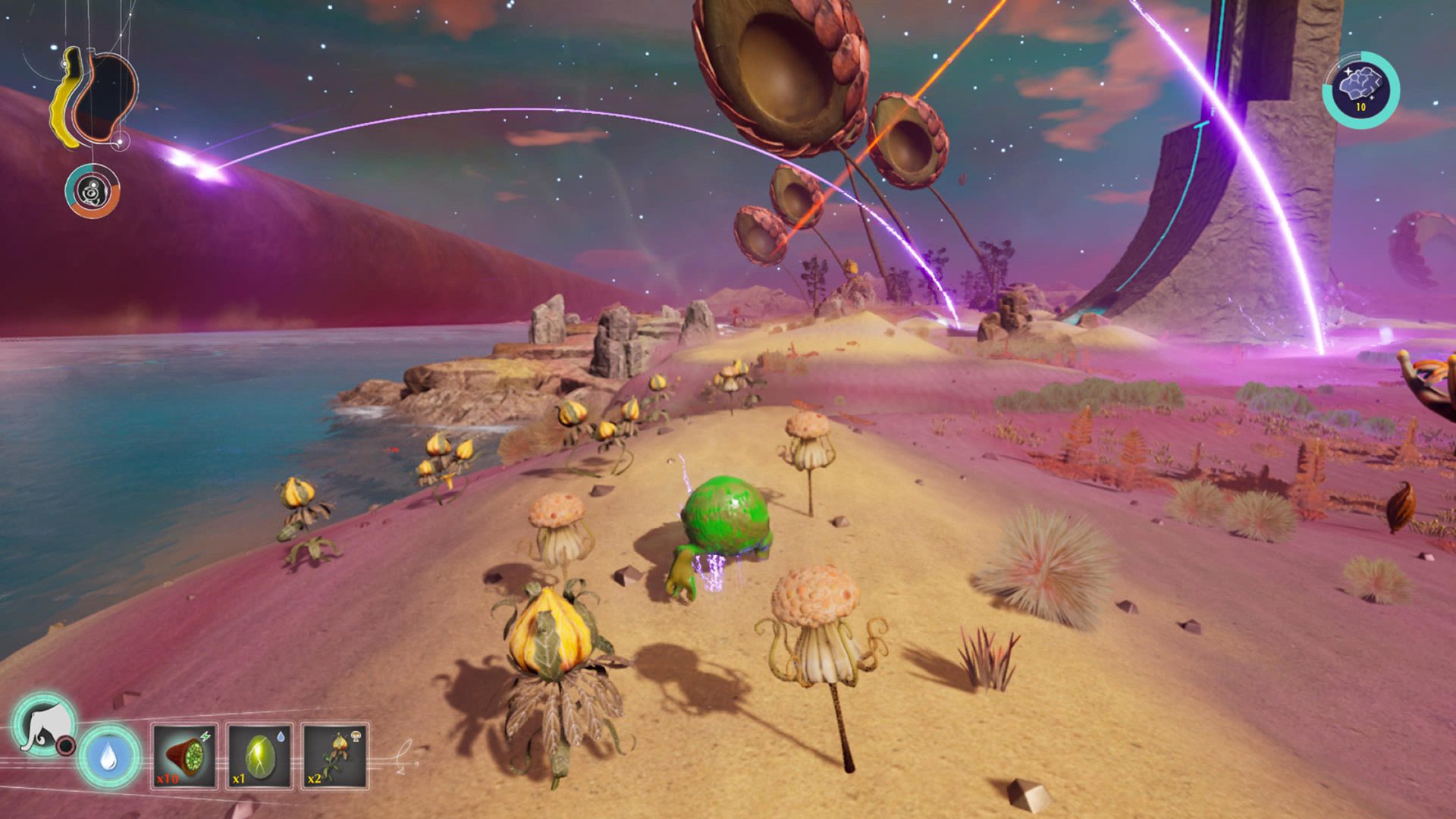 I simultaneously want to tell you everything about The Eternal Cylinder and nothing at all.

Like my favorite survival games, it’s heavily story-focused, complete with an excellent narrator to help you make sense of your imaginative yet nightmarish surroundings.

There are several toggles you can use to tone down hunger/thirst, enemy aggression, and the ferocity with which that intimidating Cylinder comes rolling after your tribe of weirdos, among other settings. It’s important to note that upfront, and also highlight how easy it is to save the game “just in case” and/or rely on generous autosaves when things go horribly awry. There are even safeguards in place to prevent a poorly-timed manual save.

At a glance from the sidelines — and even early into the game itself — it might seem like The Eternal Cylinder is some sort of roguelike-infused romp. You can lose members of your squishy Trebhum family and still get by, but if they all wipe (due to, say, a giant rolling pin), it’s game over. You’ll then have your choice of several backup saves, because this isn’t a run-based structure — it’s a linear story with stretched-out chunks of land to explore.

As you poke around in search of food and drink, trying your best not to get eaten by things with too many teeth, or hunted by super freaky human-machine hybrids, you’re not under any sort of time crunch. (Usually.) The Cylinder will stay put until you tread into an impossible-to-miss wall of energy, and the moment you cross that line, the race is on.

Once the Cylinder heats up (which is usually but not always in your control), to stop its advance, you’ll need to ball up and roll as fast as your little creature’s stamina meter will allow. If you can make it a distant tower and activate it, it’ll hold back the all-consuming machine — until you decide you’re ready to ~do it all again~ to continue your odyssey.

I can’t oversell how exciting the chase sequences are, even once you know the drill. It’s horrible and beautiful to see the behemoth knock down trees, squish fleeing fauna, and crunch mountains — but it’s best to not get too distracted. You’ll escape the Cylinder dozens of times during the course of the game, and I had a lot of photo finishes.

The sound design, and especially the ominous soundtrack, which is so memorable in so many ways, is spot-on. It elevates the whole experience. Even though The Eternal Cylinder falls into an identifiable and almost-too-repetitive cycle, the threat always feels real. 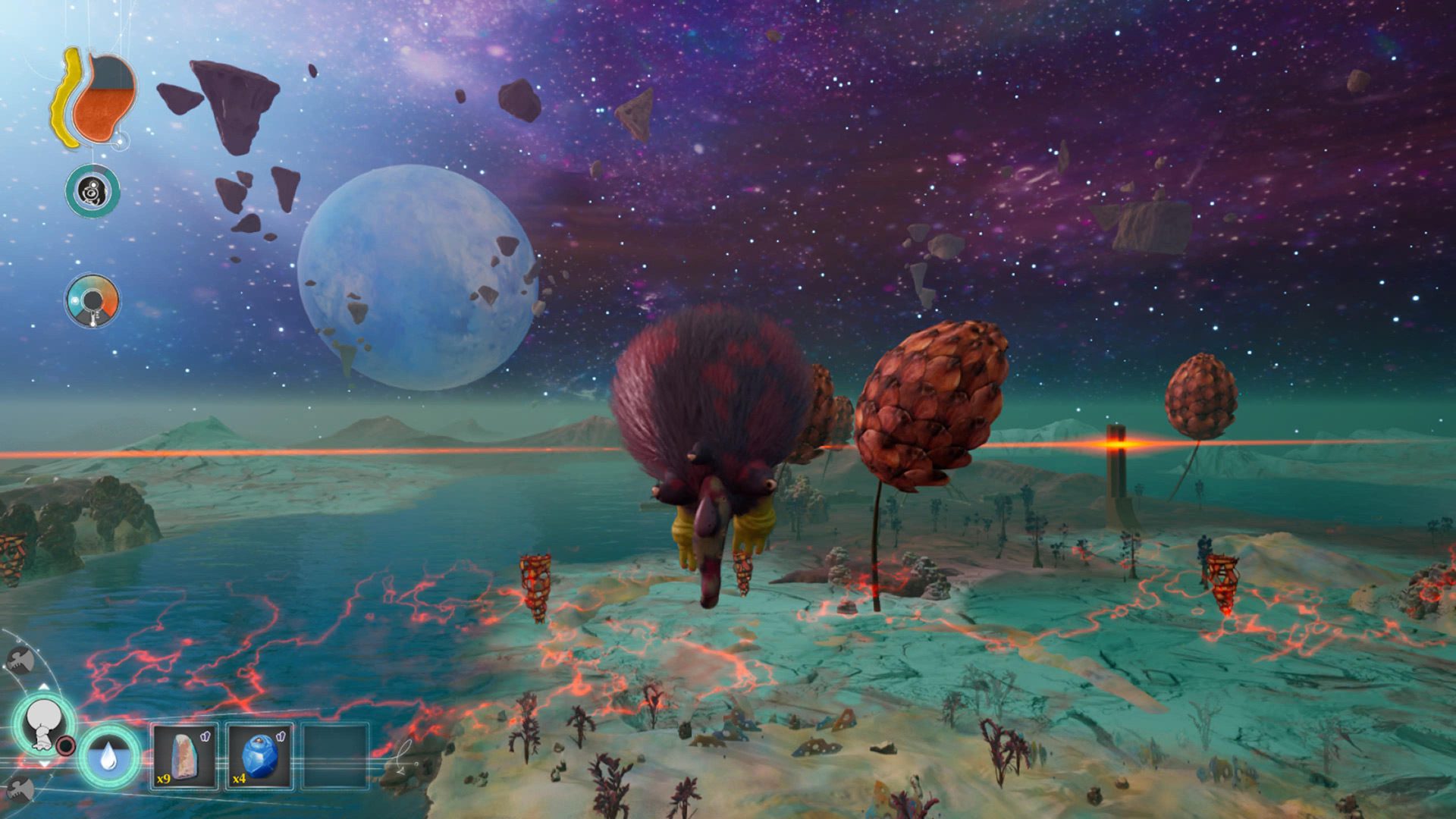 I was constantly worried that I’d slip into a no-win situation, especially as it dawned on me that this wasn’t a short game, but those fears never materialized. It all just “worked.”

That goes for the Cylinder-escaping races to the next tower, as well as the Trebhum I wasn’t directly controlling. You can freely swap between members of your clan (which is great for stockpiling certain resources for a rainy day), and everyone will automatically tag along and keep themselves alive — within reason. They aren’t invincible, but considering how many minions with a death wish that I’ve lost in video games before, I was surprised by how vigilant the AI was. I feel like there’s some behind-the-scenes trickery, but the illusion mostly holds up, and most importantly, there isn’t any unnecessary friction.

The Eternal Cylinder strikes a great balance — there’s high-stakes excitement without too much stress to the point that it’s no longer fun. I also love the blend of “what’s that over there?” exploration mixed with survival and puzzles, some of which are housed in discrete video-game-style dungeons, and some of which are naturally unfolding encounters and interactions in the world as you learn to tango with ambivalent and predatory species.

I’ve gotten pretty far without even describing the basic minute-to-minute gameplay loop. Whoops. As one of these mutating Trebhum creatures, you will run, jump, roll, plop, float, suck, and spray; I’m probably forgetting a few more. With their trunks, they can vacuum up food and other trinkets (a strangely enjoyable mechanic) and then store them in their (multi-slot) bodies. You’ll tap over to any given sucked-up item in the HUD (using the d-pad on a controller) and then consume it, or maybe launch it back out, depending on the situation. You can spray water, too. Whenever you do it, the rest of your herd will join in, and it’s pretty hilarious to shoo a monstrosity with a well-aimed shot to the eye. 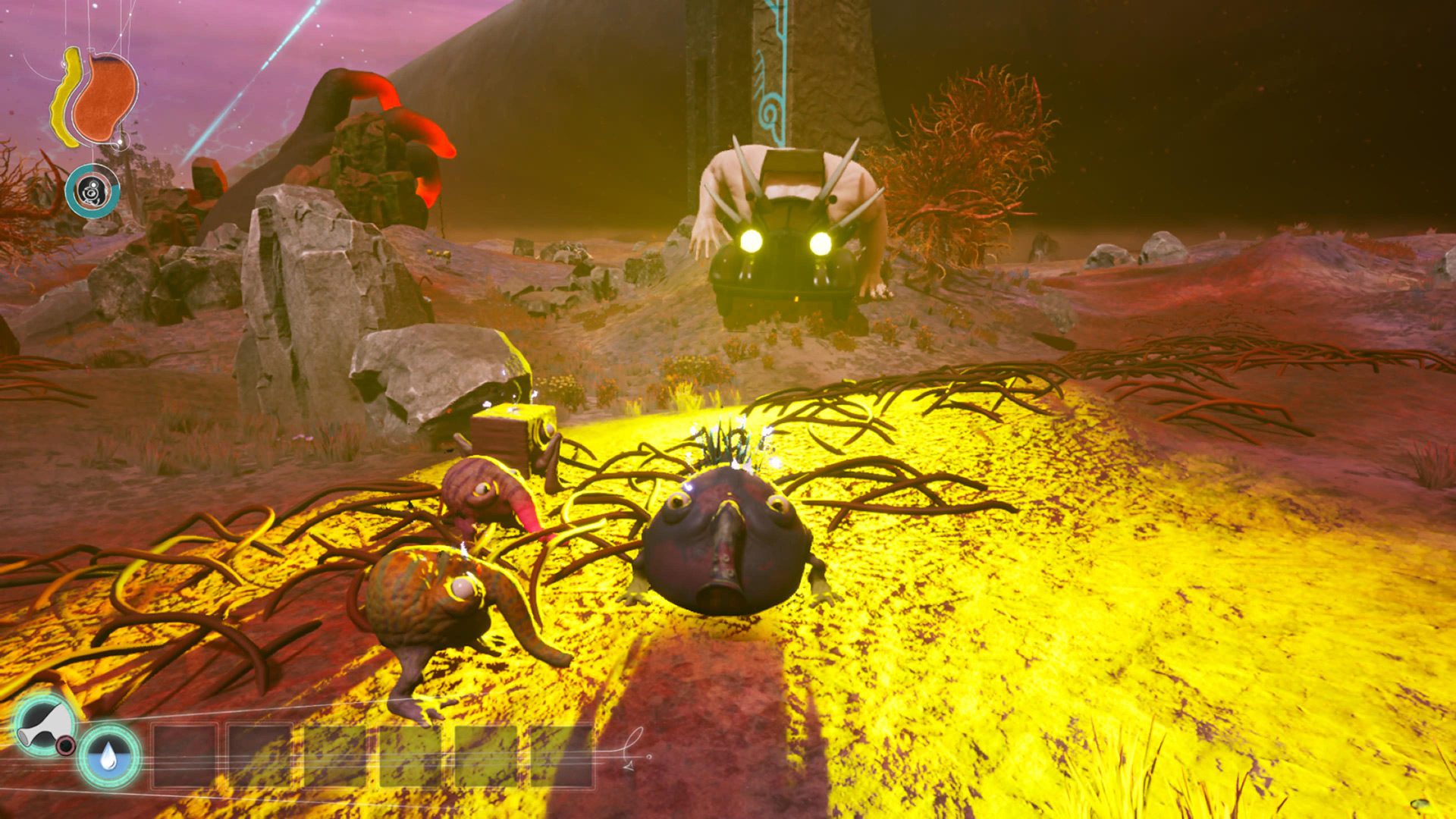 Different snacks cause different evolutionary reactions within the Trebhum, and you’ll use these new forms to traverse the world, fend off threats, and solve puzzles. The trick is to have the right ingredients to create the right collectively capable mix of creatures. You’ll wanna diversify, but the game isn’t so rigid that you necessarily have to all the time.

You can sneeze fire, grow fur, gain flippers, glow in the dark, develop crystalline skin, and even get the ability to scan creatures for a lore-filled compendium. There’s a whole web of mutated abilities — a system that calls to mind the fascinating but flawed Ancestors: The Humankind Odyssey, in the best possible way. Further in, you can combine specific ingredients to “lock in” a mutation and then enable your Trebhum to freely morph wherever. Otherwise, you’re limited to what’s in your surroundings. The Eternal Cylinder is balanced; everything you need is in reach, especially when it comes puzzle-filled temples.

During your travels, you’ll want to keep an eye out for Trebhum eggs to hatch with a heat source or new members to rescue or revive. At a certain point, I was able to store my extras in “the cloud,” and future me, much later on, was thankful for the assist. You’ll also want to look out for sanctuaries where you can spend a glittering currency to bolster your stamina and increase the number of Trebhums you can lead, as just two examples. 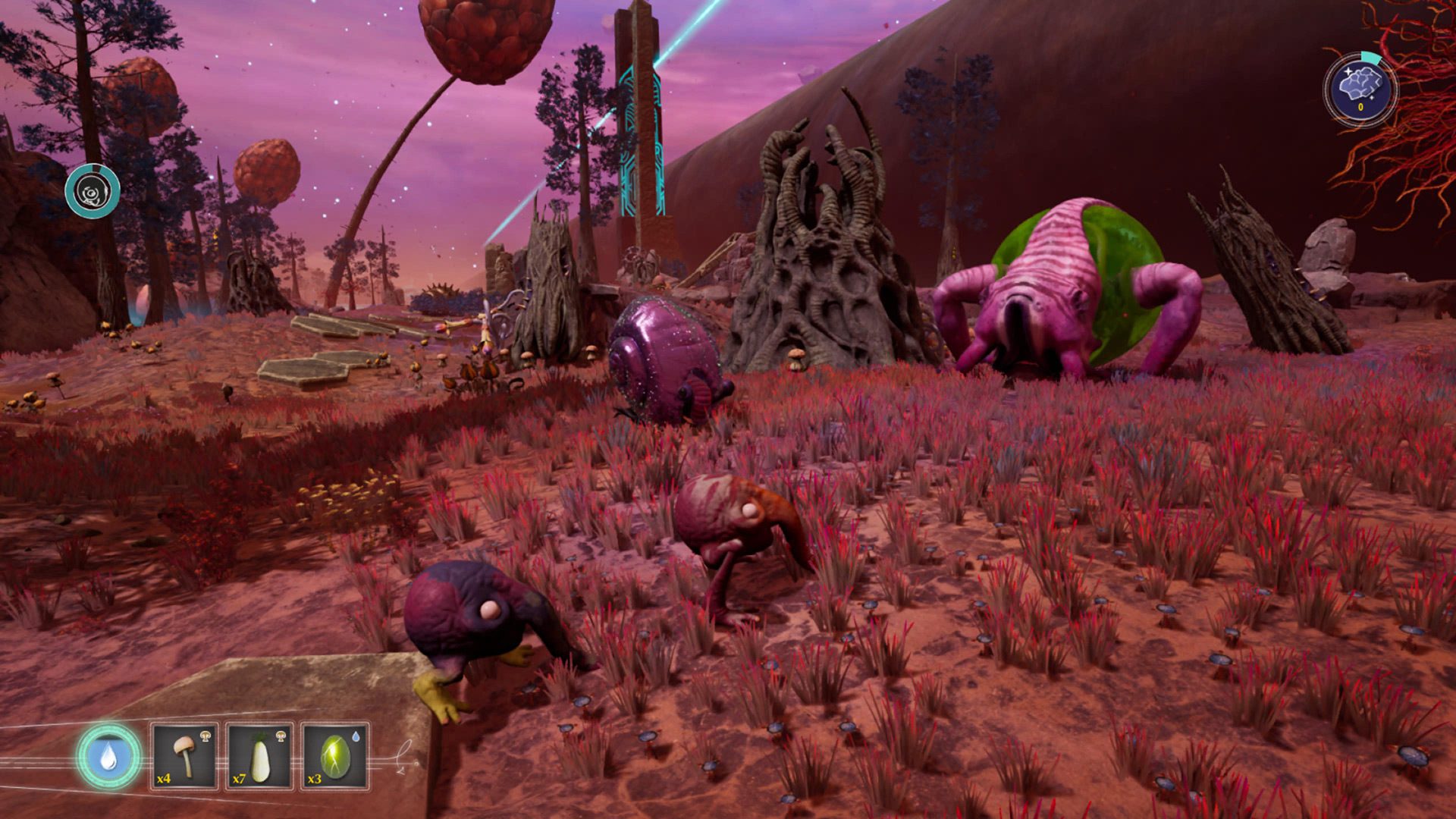 How’s the performance? I played the PS4 version primarily on my PS5, and it was smooth outside of a few rare hectic instances with short-lived dips; just don’t expect a completely locked 60fps. I also tested my endgame save on a PS4 Pro, which was adequate, but a noticeable downgrade — you’ll be fine if you can tolerate the ballpark 30fps range.

It’s worth noting that there aren’t PS5 and Xbox Series X/S editions, as this is a PS4, PC, and Xbox One game (with next-gen compatibility); a physical edition is coming later. As a nitpick, I wish there were more trophies/achievements for the sake of extra replayability; there’s no platinum. I do appreciate field-of-view options on consoles, though!

At this point, I have to hope you’re sufficiently intrigued by what I’ve written, because I’m wary of saying too much about the story or characters or motivations in this game.

I think The Eternal Cylinder does a great job with all of these facets. Beyond the force-of-nature Cylinder, there’s also a recurring villain, a weird-headed nude giant called The Mathematician, who adds wrinkles to your great escape. The Trebhum are goofy bits of flesh, sure, but they also have a rich history and a potentially bright future ahead of them, which you’ll slowly uncover. And the narrator is not just here to provide context to you, the player, in this wacky world — though he does a good job of it. This could have easily been a mystifying mess to try and sort through, but it never is. Playability matters a ton. 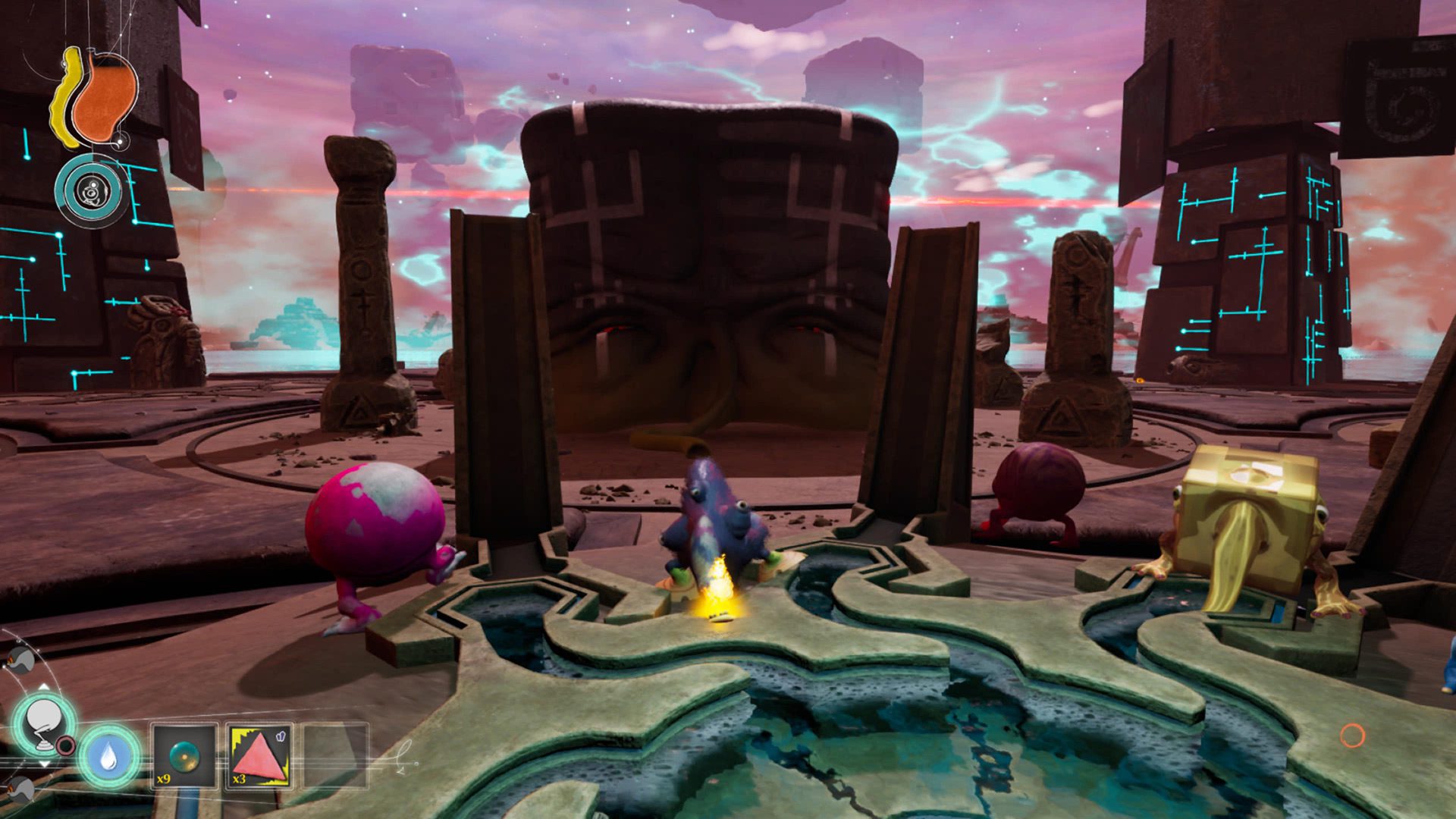 I don’t have many complaints if I’m being honest. I feel like this is a rare case of a strange game that really goes for it while still, first and foremost, being enjoyable to play. I could see some people potentially wanting more traversal abilities, or more shakeups in the explore-survive-escape format, but I like that things never get too complicated, and most of the “cycles” introduce something new, even if it’s a small surprise or change-up.

The Eternal Cylinder clocked in at around ten hours, and I was so absorbed in it — I was so curious about how my funky bunch of critters was going to get out of this seemingly insurmountable jam — that I finished the game in two sittings. It truly clicked with me.

I’m equally excited to see how much it resonates with everyone else. Maybe it won’t! But I thoroughly enjoyed it, and this experience will stick with me for a long time.