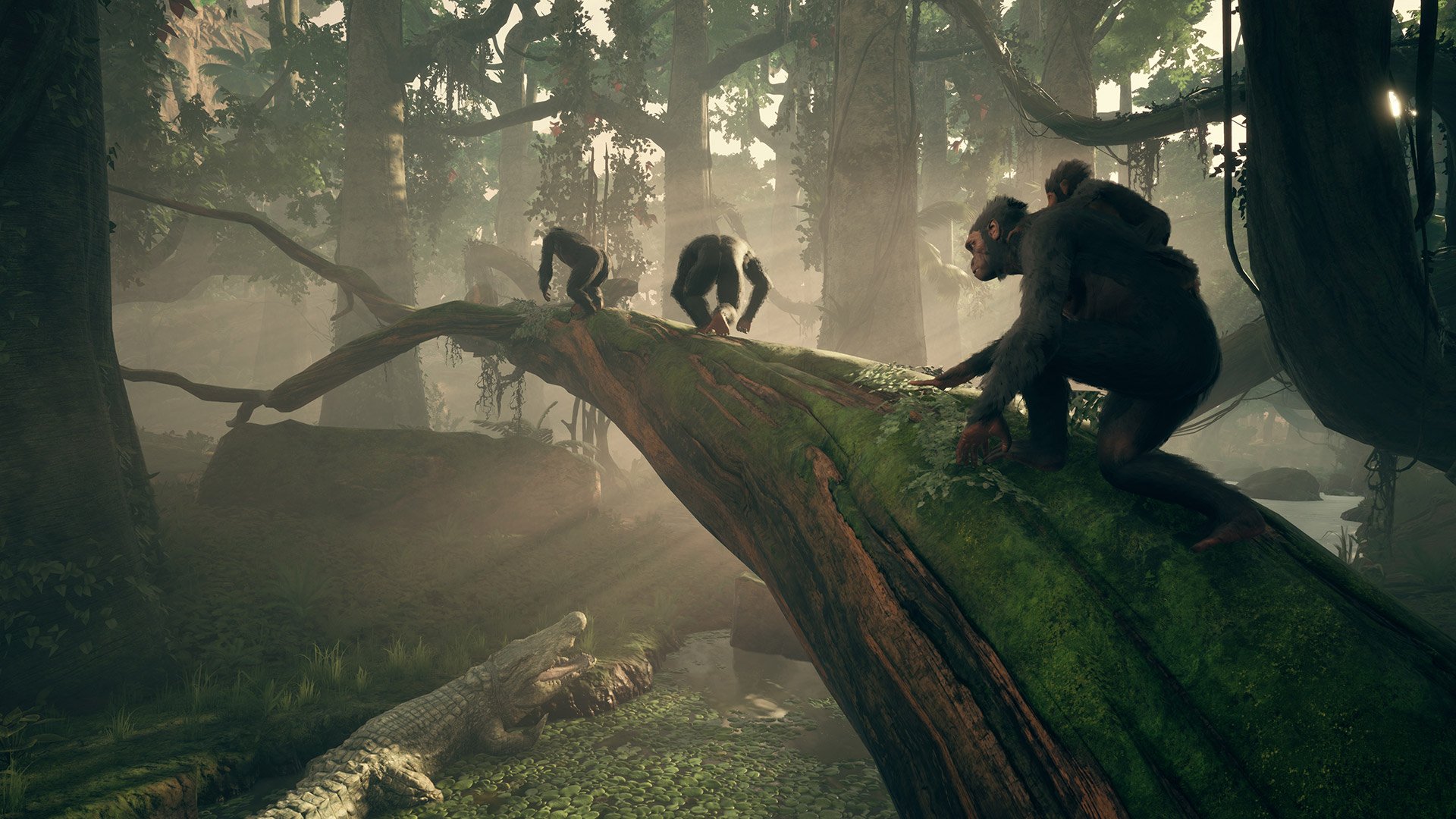 ‘Tell me, O muse, of that ingenious hero who travelled far and wide’

Evolution is beautiful, staggering, and uncaring. So too is Ancestors: The Humankind Odyssey, a survival-adventure game that rewinds the clock 10 million years to shine a light on the plights of early hominids.

It’s one of those video games that doesn’t come around all that often, both in subject matter and scope. You won’t just figure out how to walk upright – you’ll also learn to use both of your hands in tandem, then how to fashion tools, then how to use those tools to forge primitive weapons, and so on and so forth, passing crucial knowledge down through the generations and eventually evolving as a species.

A few months after its PC-only launch, Ancestors is now playable on PlayStation 4 and Xbox One with better tutorials and a few extra sorely-needed niceties. The original timing wasn’t quite right for us – travel and other priorities got in the way of a review – but December is a different story. I’ve spent all week teaching my adorable children how to fend off saber-toothed cats, pythons, and even hippos.

Ancestors is ambitious to a fault, but it’s impressive that a relatively small studio – Panache Digital Games, led by one of the creators of the Assassin’s Creed series – was able to pull it off so well.

The path to humanity is paved with a whole heap of dead apes.

In the opening hours, when you’re still getting a grip on the basic controls (which trigger corresponds to which hand again?) and your unforgiving surroundings (which plants are nausea-inducing?), Ancestors can be tough to crack. That’s to say nothing of big-picture concepts like locking in certain traits so they aren’t lost during generational leaps, and capitalizing on helpful genetic mutations. It’s quite literally a game about learning – both for you, as a player, and your apes, who are making it up as they go.

Ancestors revels in minutia every step of the way, for better and for worse. You don’t press a “craft” button – you painstakingly sharpen a branch a dozen or so times until it resembles a makeshift spear. You don’t use a mini-map to spot predators – you find a safe perch and rely on your senses (hearing, smelling, and “intelligence”) to identify and tag the threat. You don’t just mate and have babies all quick like – you have to use audio cues to successfully woo a partner, and fertility is a factor.

The game can also be brutal, especially if you play even semi-recklessly. Death comes fast and early, and once a primate dies – due to a botched jump off a towering treetop, or an irate pack of feral hogs, or sheer exhaustion – that’s it. The poor primate won’t even cut it as a tiny footnote in the history books.

Somehow, I had the good fortune of never running out of apes in my seven-million-year journey, but that possibility weighed on me. I shudder to think about having to start anew after all the progress I’ve made. Misfortune and bad luck could be game-ruiners. But on the flip side, when you narrowly survive a long trek to rescue a stranded baby guarded by screeching monster-otters, or you finally, finally make it out of the jungle and put down roots in the savanna, you’ll feel a profound sense of accomplishment.

With that in mind, my first 10 hours flew by. Ancestors isn’t a consistently fresh experience – you can’t help but wonder what a bigger budget might’ve achieved – but it hits many of the marks that matter.

I felt like I was always learning some new trick (honey isn’t just for eating!), or gaining abilities to increase my odds (huge tip: prioritize dodging and counter-attacks in your neuronal network), or scouting distant question-marks (not all landmarks are safe to nap in). That momentum doesn’t last forever, of course. It’s a finite video game. One of Ancestor‘s biggest faults is the way content starts to repeat itself. The opening hours are significantly more interesting than the mid- or even late-game.

The evolution mechanic encourages you to use every type of tool in every conceivable way and leave no area of interest unexplored, which is great. That’s what Ancestors is about. The more you push on into the unknown, and grow, and take on new predators, the bigger your evolutionary leaps in time will be. But if you’re committed to reaching the credits, you’ll hit an inevitable point where these goals (known in-game as “feats”) become increasingly asinine as you run out of attainable tasks on your checklist.

Scouring for meteor crash sites? Cool – you didn’t even need to ask. Intimidating a rhino herd like a madman with a death wish? Sure, love too. Getting a crocodile to take down a black mamba, a warthog, a gazelle, and several other animals that I can hoot and holler at but not easily direct? No. Just… no.

As much as Ancestors is spread too thin to pull off evolution in a cohesively entertaining way, I enjoyed the other side of the token: generational time-skips. Once initiated, your babies turn into adults, your adults turn into elders, and your elders become bone piles full of valuable XP. You can only pass on a small portion of your skills to the new generation, but skills tend to unlock in a more organic way than the later evolutionary feats, and they branch off in a bunch of directions, so they come steadily.

What little I played of the original PC version of Ancestors often felt like taking a pop quiz about an off-hand remark a professor whispered on the first day of class while everyone was busy reading the class syllabus. Figuring out how to do anything, no matter how insignificant, felt like tangible progress.

At launch, the console versions aren’t nearly as arcane. They’ve been demystified with more informative tutorials, explicit goals to work toward, and a control cheat-sheet in the pause menu that serves as a much-needed recap – even for things you aren’t ready to know yet. There’s still a pervasive sense of intrigue and discovery, but you won’t feel a constant urge to look up guides and wikis to survive.

As someone who loves unrestricted exploration, incremental character improvements, and the cult-favorite PlayStation 3 game Tokyo Jungle, Ancestors ticks a lot of very specific boxes. Not that many people will play it – and far fewer will reach the final evolution – but it’s worth celebrating all the same.

Ancestors is a large, fussy, and at times uneven survival experience, but it’s also deeply gratifying once you sink your teeth in. Make it through the wringer, and you’ll come out wanting to share stories about your run-of-the-mill open-world exploits to anyone who will listen – no small feat in 2019. The console versions are smoother than their original PC counterpart, so if you’ve been curious, now’s the time.