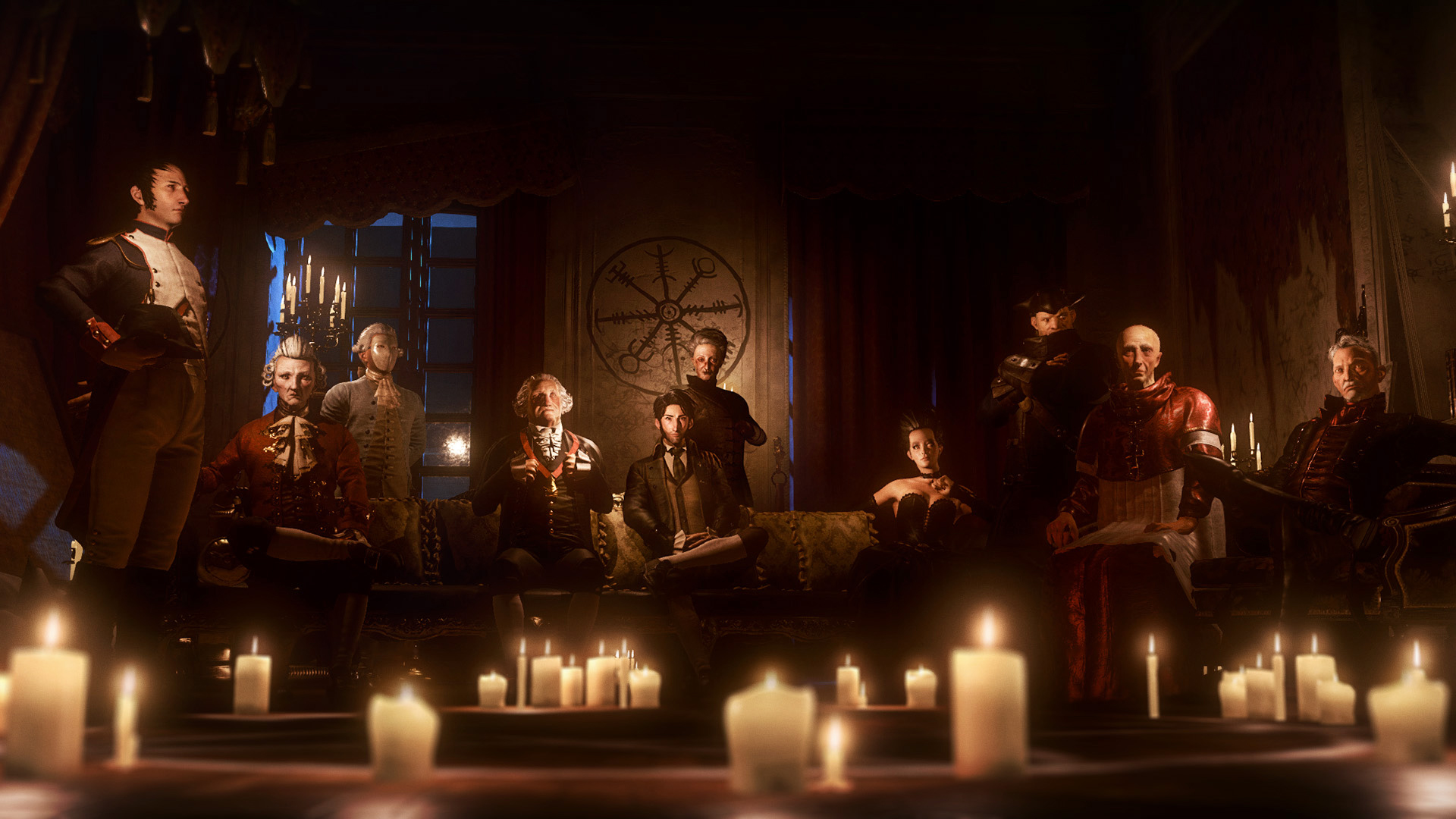 Now I’M the mad one

As soon as I began playing The Council, I was immediately reminded of Agatha Christie: And Then There Were None on the Wii. I doubt others will have this moment in their head, but bear with me. The atmosphere felt incredibly similar as I walked around outside a manor and felt the rumbling of a mystery brewing. The mechanics couldn’t be more different, but I was instantly transported back to years ago when I attempted to solve the mystery on that island. 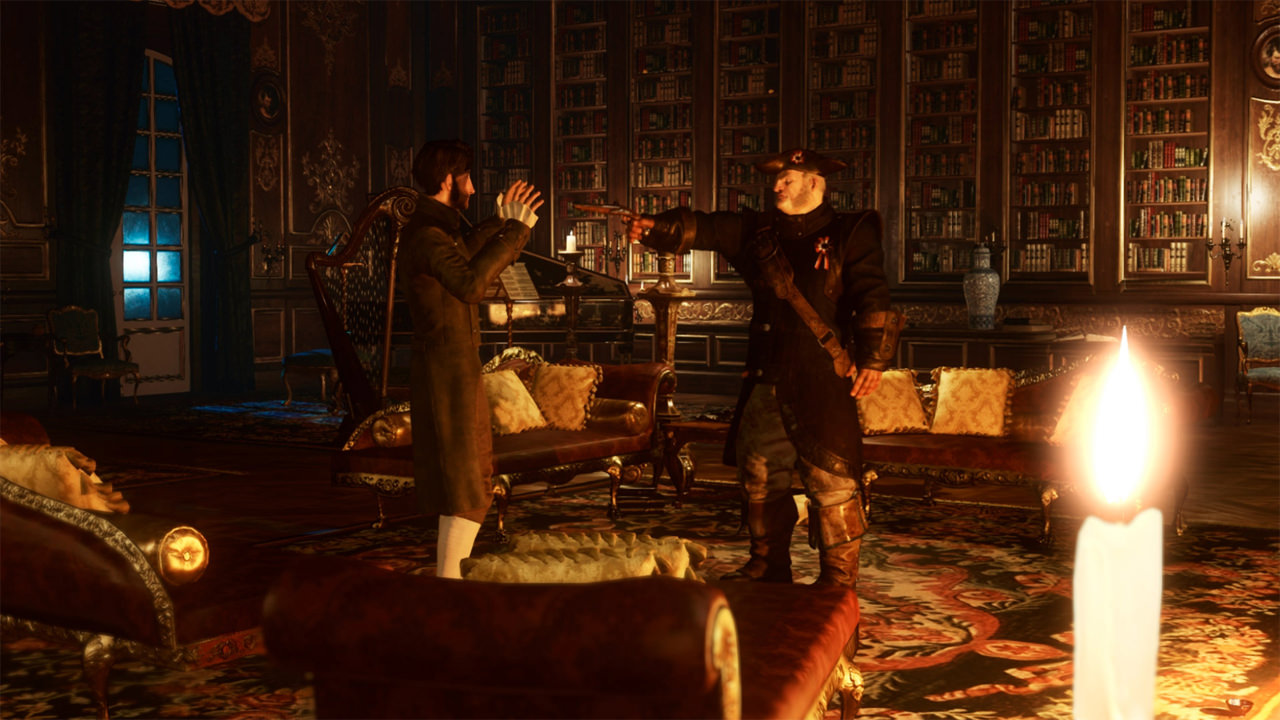 Players assume the role of Louis de Richet, a man who despite having an incredibly French name has seemingly invented the “American” accent way back in 1793. Oh dang! I said to myself I wouldn’t bring up the voice acting so soon in the review. Hell, it can’t be ignored.

The awful voice acting in The Council ruins the entire experience.

The story is decent enough to hold anyone’s attention — Louis is searching for his mother on an island where many important historical figures, including Napoleon and George Washington, have been invited by a “Lord Mortimer” for a reason yet to be determined. It seems as if Louis’ mother has left behind some clues, but where and why she has disappeared is the driving mystery, though others certainly begin to manifest during Louis’ search.

I love a good mystery. I played And Then There Were None on the Wii for crying out loud. But personally, I never felt strongly about actually finding Louis’ mother. There’s a micro-scene of chemistry between the two before you’re put into a position where you need to care enough about her to solve this grand mystery — it just didn’t click with me. I did start to care about the mystery of Lord Mortimer and the island, however. I really want to know why this eclectic group of influential people are all gathered here and even who Mortimer is.

The problem is that Louis de Richet’s voice actor is horrible, and he’s always talking. If there isn’t a conversation going on with another character, his inner monologue will often be playing instead. Besides the fact that he uses an accent that doesn’t exist yet, his delivery is just flat. It also doesn’t help that the animations, facial or otherwise, don’t always line up with the seemingly appropriate tone.

The writing also sways from decent to “holy shit, really?” For example, our main man Louis casually says to George Washington “You can pick your nose but you can’t pick your family!” This is around the time where I went for a long, introspective walk outside and thought a lot about what life decisions led me to this very moment. Hell, a decent chunk of the poor voice acting comes from the lines that they are forced to say out loud; I’m not sure anyone could deliver them in a meaningful way.

Luckily, the entire voice acting cast isn’t shit. George Washington does an okay job, but again, why isn’t he even remotely British? Even the good voice actors are undermined by the janky animations accompanying their characters. The presentation, in general, is just a mess. The graphics are technically great, but old people in high-definition just looks weird. Humans often don’t look “good” when modeled and textured appropriately, especially their teeth. It just looks…weird. I think there might have been an attempt to purposefully make these characters a bit unnerving with the graphics, in which case it was a rousing success. 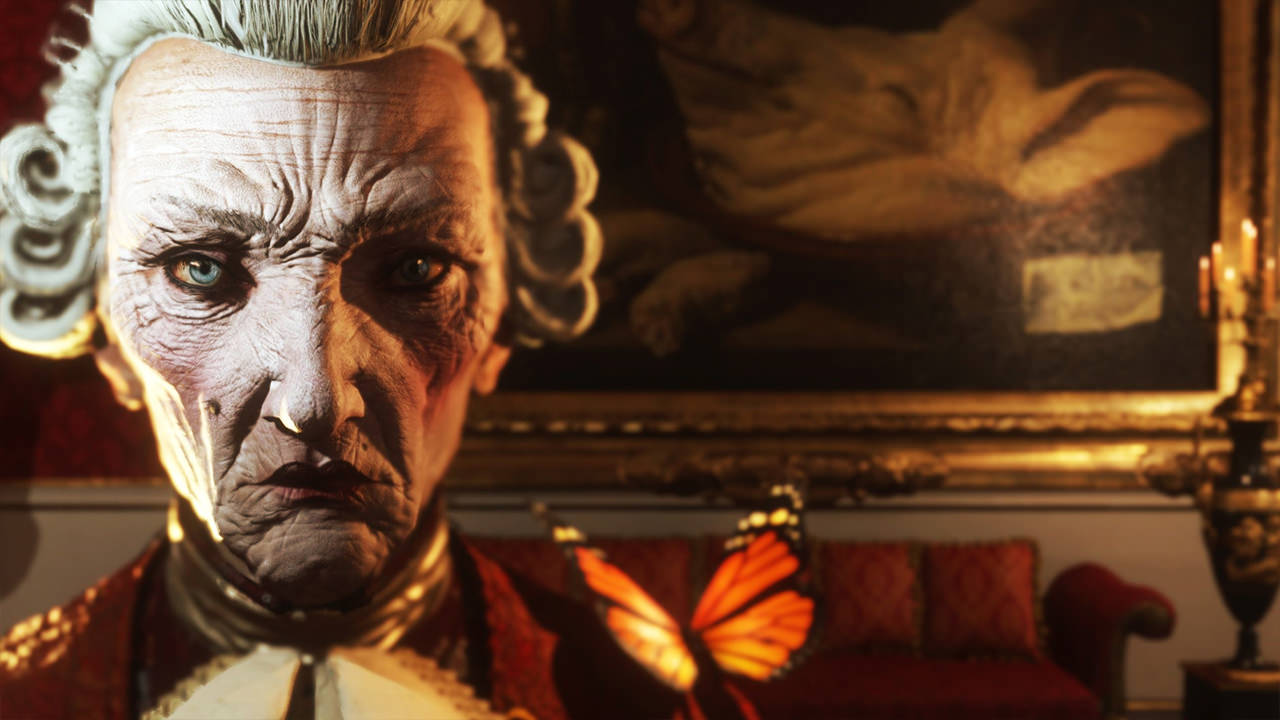 Okay, right, the game itself. Under all of these presentation blunders is a solid narrative experience. The game is essentially split up into three different types of gameplay: small conversations, big decisions, and exploring. Small decisions and exploring make up the majority of the experience, punctuated by various big decisions at key moments. This will be familiar to anyone who has played Telltale games or any of the games inspired by those designs.

The conversations with the other guests in the manor are the meat and potatoes of The Council. They are deeply ingrained in the RPG mechanics that evolve over the course of the playthrough. Early on, players choose one of three areas of expertise: Diplomat, Occultist, or Detective. Each has their own subset of skills that players can level up in between the episode’s chapters. Skills will unlock unique dialogue options during conversations, allowing for more information to be gathered or items to be acquired. Things like Manipulation, Diversion, and Logic are examples of the kinds of skills in each tree.

The Council is also kind enough to show you the options you can’t pick, which goes a long way towards conveying “hey, all these skills have some use!” It’s nice seeing how the other skills could have steered a conversation because it makes it seem like no matter which branch you chose, they are all uniquely useful. Plus, you can still earn skills from the other branches, they just take more of a skill-point investment. By the end of this first episode, I had skills from all three branches and found uses for every single one.

Sometimes conversations turn into “Confrontations.” These are decidedly more important conversations that can impact how the story progresses. They take place in steps, where the player can succeed or fail. Often, using a skill from the areas of expertise will guarantee success in the step. However, it comes at a cost of “Effort Points.” These are a simple resource that keeps the player from spamming their abilities and winning every conversation ever. 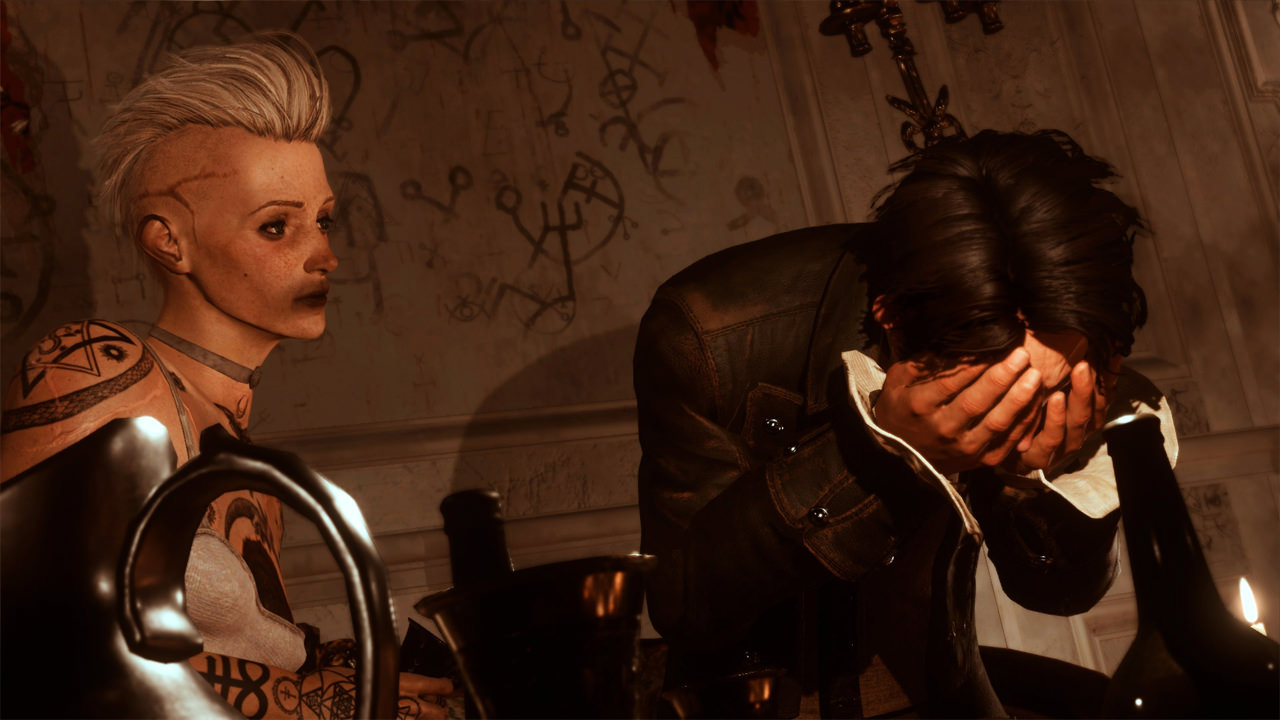 This also greatly “gamifies” conversations. It’s a constant resource balance when talking with someone. There are items players can pick up from the environment that restore Effort Points, and these can be used during or out of conversations to replenish and keep using skills. Other items are available that make the resource management aspect a bit more interesting than it first seems. I never found myself in desperate need of Effort Points or restorative items, but at least it forced me to constantly be aware of how I was spending these points.

The best thing that The Council does is exactly the same as the only thing that Heavy Rain succeeded at: the lack of complete failure. There is no “Game Over” screen here, just living with poor decisions. I never came close to failing a Confrontation in my playthrough, but I went back a second time to try it out. Failing a Confrontation simply leaves the player at a loss; maybe you were trying to get a certain item from someone, and now they’re holding on to it. The last step of a Confrontation will repeat itself until either the player chooses correctly or they run out of “Blunders,” aka allowable mistakes.

The big decisions are exactly as you would expect: decisions that can change the course of the game in an instant. Often times, at least in the first episode, they involve going with one group or another. Obviously these decisions begin to ripple outward and cause more and more decisions to be influenced by them, and the player can often figure out those ripple effects while deciding.

The exploration aspect is easily the weakest aspect of The Council. First of all, I’m honestly not sure what control scheme they had in mind when designing this. The menu interface and some specific gameplay moments give the player a cursor on the screen, which heavily implies using a mouse for accuracy. However, even with max camera sensitivity, moving the third-person camera required picking up my mouse and making huge sweeping motions just to rotate my character around. Luckily, I have the ability to increase the dpi of my mouse and make it manageable, but holy shit it’s an unfortunate experience otherwise. 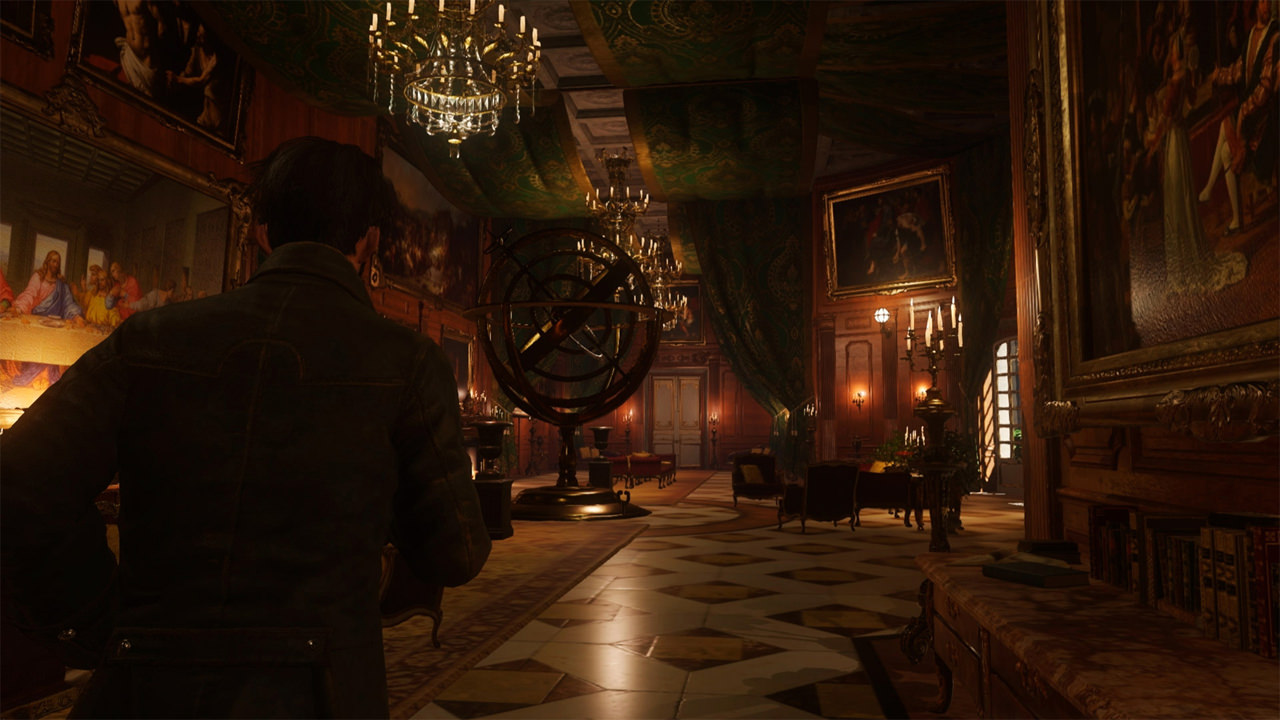 So we’re left with a UI that favors a mouse and camera movement that favors a controller, making both control schemes feel neutered. It hardly matters as the exploration gameplay feels incredibly linear and lackluster. It boils down to walking around and clicking on every single shiny thing in the environment. Most are collectibles or consumables, but occasionally there’s a lock to be picked (if you have that skill — please take that skill; it is super useful) or a clue to be found.

There are some genuinely cool moments that come from the exploration aspect, though. At one point I was tasked of figuring out what clue was left behind by a certain character. I won’t go into details, but I will say that I ended up mucking up the clue by attempting to solve it through ways that I did not think out, leaving me with about half a clue. The other half was completely messed up because of my actions — I felt like a loser! Unfortunately, that was one of the few moments that I truly enjoyed from my time with The Council.

There are five acts of this game. While I’m sure some of my concerns like janky animations and a lack of interesting exploration options can be addressed, I think that most of the game’s issues will plague each and every episode. They can’t shake the bad voice acting. Maybe they can increase the quality of the writing. There is a great blend of RPG and narrative mechanics here, it just isn’t worth muddling through everything else to experience.