In 2011, I lost a chunk of my life. An insidious tendril of addiction, despair, and obsession caught me by the ankle and dragged me into the The Binding of Isaac‘s darkened basement. I lost dozens of hours, whole days at a time. I let life slip by around me while muttering a demented mantra of “just one more try, just one more try…”

Now with the release of Binding of Isaac: Rebirth, a 16-bit looking half-remake, half-sequel of the original, I can feel the same cold touch on my leg. Its grip is stronger than ever, pulling me back into the same dark pit. I should kick and scream and try to escape… Well, maybe just one more try won’t kill me. 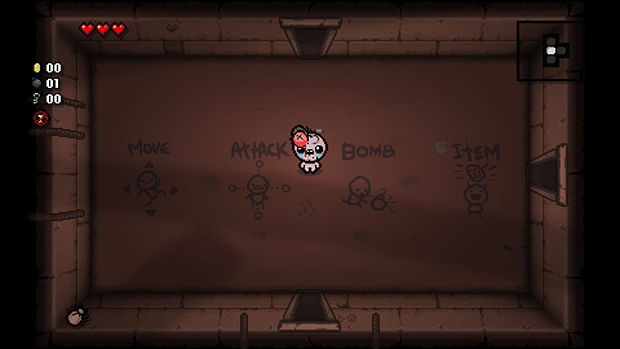 Everything about Binding of Isaac is crazy and feels like it somehow shouldn’t exist. But it does, and there is a kind of naughty thrill in that, like getting away with a rude joke at the dinner table. For those unfamiliar with the original, Isaac is a roguelike twin-stick shooter/dungeon crawler where you play as a small naked boy named Isaac, whose mother, believing she has heard the commanding voice of God, is trying to kill him. He desperately flees into the basement where he encounters deadly insects, mutated siblings, and every sort of grotesquery you could care to imagine. He fights them with his tears. Yup.

Every run is a new experience, a single chance at heaven or hell. If you die, it’s back to scratch. The game is deeply mysterious, featuring no fewer than 16 different ending, at least 8 unlockable alternate characters, 4 bonus levels, and literally hundreds of items to discover, unlock, and experiment with.

It’s a deep, dark rabbit hole and if you have any kind of completionist streak it will ruin your life (take it from me). Isaac may present itself in the familiar sheep’s clothes of a Zelda clone, a fun romp through some old-school top-down action, but that’s just the skin-suit pulled tight around the beast. At its heart, Isaac is its own twisted, beautiful monster.

The most notable difference between Rebirth and the original Isaac is the shiny new engine and graphical overhaul. The original was made in Flash, giving the game a distinctly smooth and cartoony look, and with no shortage of technical problems to boot. Rebirth ditches Flash (and thankfully all of the bugs and glitches associated with it), dropping the smooth lines for a more detailed, SNES-era pixelated look.

More importantly than the faux 16-bit trappings, the new engine allows for a smoother and more stable experience. Where the frame rate of the original would drop through floor like a bowling ball when too many shots or enemies got on the screen, that’s no longer an issue. Rebirth runs at a flawless 60 FPS come hell or high water.

With the smoother graphics come some gameplay changes. Rebirth is a much more shooty (to use my highly technical vocabulary) game than fans might be used to. The dependable frame rate allows for much more intense fights than the original ever dared to attempt, veering into bullet hell shmup territory on occasion. All of the new bosses introduced in Rebirth (and there are a lot of them) are much faster and aggressive than the old guard, and some of the returning enemies, particularly the final bosses, have been overhauled to be FAR more trigger happy than they used to be.

I never thought I’d be happy to run into the likes of Loki or Peep, but I’ll take them any day over the new recruits in Satan’s army.

Thankfully, bullet hell is a knife that cuts both ways. Rebirth does not shy away from crazy item combinations that completely break the game. At one point I had a fully upgraded rate of fire with floating anti-gravity tears mixed with ricocheting rubber cement and a boomerang effect. I would step into a room, hold down the fire button for about a second or two, let go, and watch the entire room be enveloped in tears and instantly eradicate everything. The game might have gotten more difficult, but there are also more items to help turn it around.

Along with the other technical advancements, there is more variety in the shape and size of the dungeon chambers in Rebirth. Rooms are no longer limited to the single screen rectangular format they used to be. You will come across long hallways rigged with traps, huge arenas filled with enemies, big multi-screen affairs that will scroll along with Isaac’s movement. These massive rooms have hosted some of the most intense moments I’ve had with Rebirth, the added space allowing for multiple mini-boss battles or elaborate traps.

Rebirth includes a small, but delightful, two-player mode. At any time player two can join in as a tiny, floating ghost baby at the cost of one of player-one’s heart containers. Ghost baby is definitely second fiddle, unable to plant bombs, walk through doors, or pick up items (no cheating and grabbing something from across a gap), but he will benefit from whatever kind of shot upgrade Isaac has collected. It won’t become the new way to play Binding of Isaac any time soon, but having a wingman is loads more fun than it has any right to be.

Rounding out the new additions are a few quality of life tweaks. Control pads are now supported on the PC version, and work perfectly fine if that’s your preferred style. You can choose between “Normal” and “Hard” modes now, letting you somewhat regulate what brand of insanity you’re looking for. Hard mode, of course, hides its own set of exclusive items and enemies, so anyone looking to collect all the goodies should prepare to suffer for the compulsion.

Rebirth graciously now allows you to quit mid-way and return later, instead of holding you hostage to a good run. (“I’m going to be late but I have fully powered tears and twelve heart containers! I mean, the divorce rate around here is like 55%, so I can probably get another shot at being my brother’s best man, right?”). It is potentially a life-saving addition for the truly possessed. 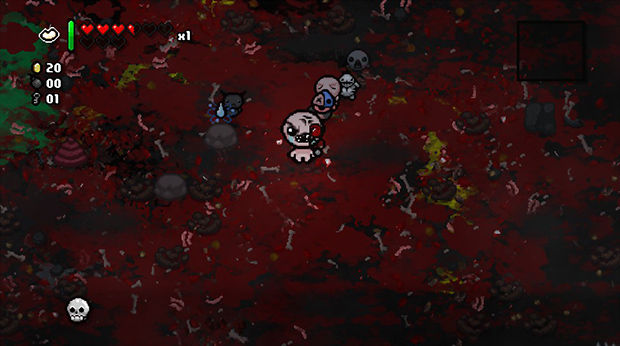 Rebirth surfaces the randomized “seed” of each run, a small series of numbers you can input to generate the same map/item pick-ups. You can replay particularly great runs, near misses, or swap favorable map layouts with friends. This is a shockingly generous addition that seems to run counter to much of the game’s otherwise unforgiving and hard-nose posture. It seems so out of place that the idea rankled me. I respect the purity of the one-chance, perma-death run. Watering it down with de facto do-overs cheapened the experience for me faster than fall of the Berlin Wall devalued the Soviet Ruble.

As an addict of the first game, my favorite enhancement is also the least consequential, Rebirth is able to visually stack multiple items on Isaac with fewer conflicts than before. It may seem silly, but watching Isaac’s strange transformation from a tiny naked boy to a pustulating, winged, blood trailing monster, or failed Siamese twin with a chemical burn, or lipstick wearing cyclops being followed around by the floating head of his dead cat, or whatever, is one of the greatest pleasures in the game to me. My heart always broke a tiny little bit when one item would overwrite another, or just not appear at all.

I love just about everything about Rebirth and (if you couldn’t already tell) I can’t recommend the game enough. But I feel like I would be remiss if I didn’t talk about the poop. 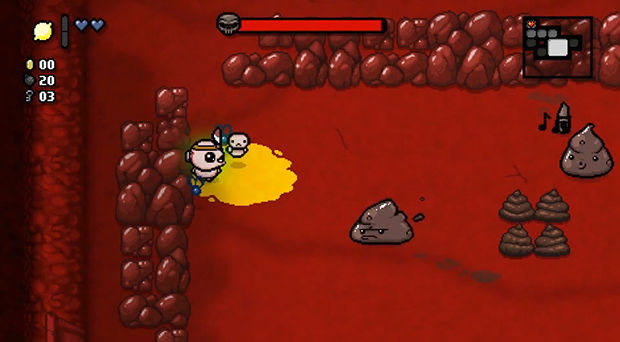 There is a lot of poop in this game, a lot of tasteless dead baby jokes, gross out gags, and weird Christian imagery, all of which might rub some people the wrong way. Personally, I don’t mind that stuff and I think the game earns some of it’s nastiness (the very core of Isaac is a sad story of child abuse as seen through the eyes of the child experiencing it after all, it’s going to be horrifying and juvenile), rather than just being gross for grossness sake. Still, it’s going to be a deal breaker for some people.

The Binding of Isaac: Rebirth is hands down the best version of Isaac. It improves upon the original, a fantastic game in its own right, in every conceivable way. If you haven’t played Isaac yet, this is the version to get. If you are a fan of the original, these are so many new items, enemies, and experiences to be found in Rebirth that it feels far more like a sequel than a remake.

Rebirth is an incredible experience that can’t be missed. Descend into the basement, lock the trapdoor behind you, and don’t look back.