This is my favorite kind of review to write: one in which I get to talk about a game that’s worthy of your attention, but seemingly few have picked up on.

The Adventures of Shuggy has had minimal presence online, which is unfortunate. It’s not a bad game at all; in fact, it’s a good one. If people knew it had elements similar to the time-based hijinks found in P.B. Winterbottom, maybe the game wouldn’t be in this situation.

The Summer of Arcade block doesn’t kick off for another few weeks, so it’s not too late.

Shuggy’s tale is a lighthearted one. Our little vampire friend has inherited a castle, and it’s naturally one that has its share of problems. (You ever see the original Ghoulies?) The story is minimal and told through brief comic-style cut scenes — one for each of the game’s five areas — which work decently enough.

Granted, The Adventures of Shuggy is a room-based platformer with an arcade vibe to it, so narrative isn’t exactly a top priority here. While I don’t personally care for the art style, it works for the direction they took. The music, on the other hand, I did enjoy — and it also meshes nicely with the theme.

The way the levels are presented seems odd at first, but ultimately, the decision makes sense. Every area contains many doors, each of which represents a level. Upon completing a level, a couple of nearby doors will open; this means you have some amount of freedom and aren’t forced to play every single level to unlock the next area. I really dug that, since a few of ’em are total bastards. Of course, backtracking to specific levels is made slightly annoying with this navigational system. 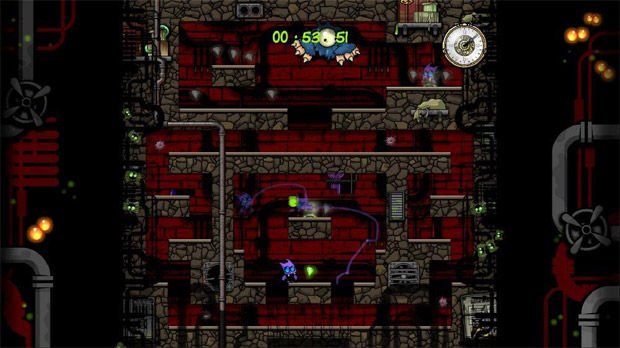 The basic premise of Shuggy is that you need to collect all on-screen gems to complete levels. What makes the game special, however, is that mechanics are fairly varied. Some rooms might allow you to rotate the entire playing field, while others turn you into an always-moving zombie with chargeable jumps that need to be timed since you have no direct control over movement.

Another one of the big mechanics plays with time. Every thirty seconds, a clone of Shuggy is created. He’ll do whatever you did in that span of time, and the cycle continues on so long as you don’t touch any of your fellow vampires.

With just over 150 different levels (36 of which are for co-op play), you’d be excused for thinking that repetition could be an issue. But, it’s really not — at least in terms of room types. Since there are no checkpoints in Shuggy, a handful of the longer levels become painful when you touch an enemy seconds before completion and have to start over.

The movement is a little on the floaty side of the platforming spectrum, but I wouldn’t call it bad; there’s room for improvement, though. There were times when I lost and I wasn’t willing to take full responsibility for what had occurred. We’ve all been there before. 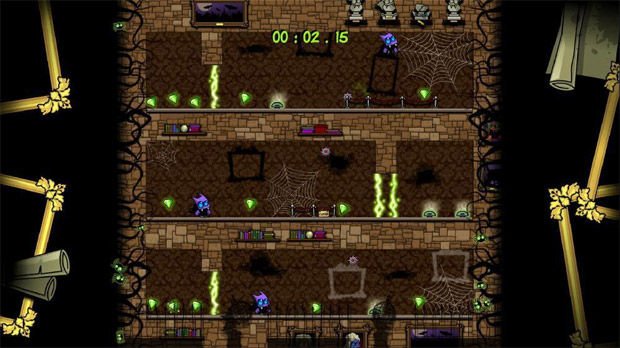 Beyond the single-player missions described above, a few multiplayer modes are offered as well. First, the competitive modes: one has players collecting as many gems as possible in a given amount of time, complete with power-ups. Another lets you take turns beating levels, where time is also a factor.

Neither of these are anything too crazy. Every time I searched for an online session, no one was playing, which is to be expected. Thankfully, you can do all of this stuff locally and aren’t made to rely on the online community to see content you paid for.

The two-person co-op is where it’s at, in terms of multiplayer offerings. It’s set up similar to the single-player, where you have to unlock access to levels through centralized hub rooms, but the levels themselves aren’t repeats. In a world where couch co-op is usually passed on by developers, this was greatly appreciated.

For the price, it’s surprising to see so much content packed into an Xbox Live Arcade game. The Adventures of Shuggy isn’t as polished as the top-tier platformers it’s put up against, but it is a great game regardless. I have a feeling this one will reach hidden-gem status for many of you, assuming you’re willing to give it that initial chance.