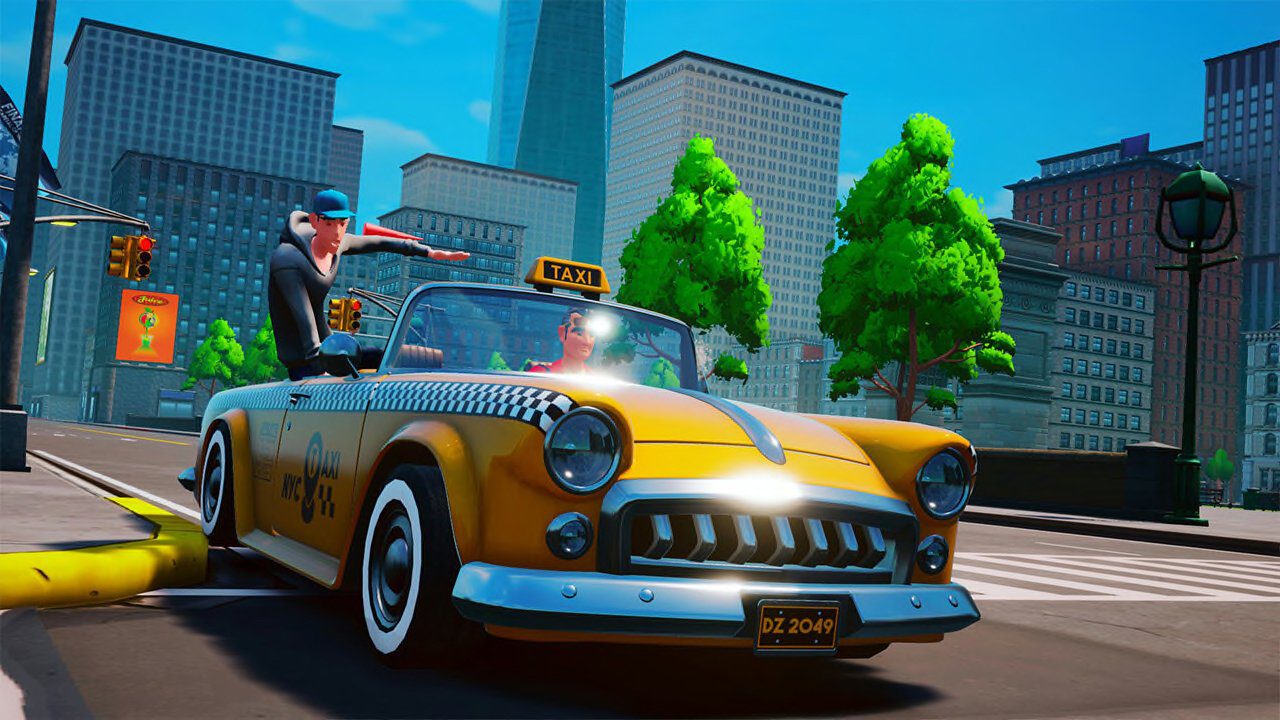 You should probably take a Lyft

Taxi Chaos is, for all intents and purposes, the spiritual successor to Sega’s Crazy Taxi. It features convertible cabs driving around a city, picking up fares, and dropping them off as quickly and stylishly as possible. There’s even the arrow at the top of the screen that guides players to their destinations. But like a lot of “spiritual successors,” it comes nowhere near measuring up to its predecessor.

Don’t get me wrong. Taxi Chaos is a very attractive game, with a city that’s brimming with color, taxis that handle quite well for the arcade experience, and music that, while not The Offspring, is decent enough generic rock that I never felt the urge to turn it off. It’s a pretty fun game to play…for about five minutes. That’s about as long as it took me to realize there really isn’t much game here.

Taxi Chaos has just two available drivers, six unlockable cabs, and three modes: arcade, pro, and free roam. Arcade mode tries its best to be like Crazy Taxi, but with a few differences that ultimately make it a worse experience. The mode has two separate timers: one overall 90-second timer and one for each passenger. Picking up a passenger doesn’t add much of any time to your overall timer, and once that expires, your run is done. Even if your passenger has 70 seconds left on their timer.

You can add some seconds to your overall timer when you drop a fare off, depending on your score for that run. Performing jumps, taking shortcuts, and nailing close calls will help boost your score, or you can just do what I did and spam the jump button. Pressing the A button will boost your taxi into the air, and you can just keep pressing that to build up your combo and your score.

Pro mode is exactly like arcade mode but without the arrow guiding you to your destination. It can be difficult if you don’t know the city, and because so much of this Lower Manhattan-inspired New Yellow City blends together, it’s probably a good idea to spend time in the free roam mode before you jump into it. Free roam completely removes the timer, allowing you to really get a feel of the different locations and figure out the best routes to each destination.

Spend enough time in this mode and you’ll realize just how bland this city is. The art direction can best be described as generic cartoon, and while it’s all very clean to look at, there is a real shortage of personality here. This city just ain’t got no soul, but what it does have are Macklemore references and its own version of One World Trade Center, which I guess means 9/11 happened in New Yellow City as well.

One potentially interesting aspect of free roam is its special passengers who will ask you to locate items around the city. Ideally, this would encourage players to fully explore the map and all the accessible rooftops, but finding everything can be so damn tedious. These special requests can easily be missed if you disable the voice audio, which I had to do after about 10 minutes because I just couldn’t take it anymore.

I’m not going to complain about the quality of the voice acting — though the Minnesota accent feels way too prevalent in a city that’s supposed to mimic NYC — but the developers need to add more conversations to the rotation. After hearing four people in a row talk about how they’re one step closer to retirement and living out their days in an old folks’ home, I’d had enough. Unfortunately, turning down the voice audio also mutes people when they’re trying to hail your cab, which really removes a lot of the ambiance.

Taxi Chaos is fine in short bursts if you want to chase high scores, but for $30 to $35 depending on your platform, there just isn’t enough content here to recommend this. Especially considering you can still buy Crazy Taxi on Xbox Live for a third of the price.