Tactical shooters are, by and large, no-nonsense simulators. Where lives matter with a side order of Freedom Fries. There’s the odd colourful exception in the form of XCOM, but most tend to revel in the jingoistic paranoia of Tom Clancy’s America. Of course, there’s nothing wrong with that, but I suspect it would do the genre a lot of goodwill if its games loosened up and had fun with their premise.

TASTEE: Lethal Tactics does just that; displaying cartoonish gore and action movie theatrics while maintaining the spirit of armchair commandeering. But its tongue-in-cheek humour actually belies an incredibly hardcore shooter; one that has little time for the impatient, let alone new players. 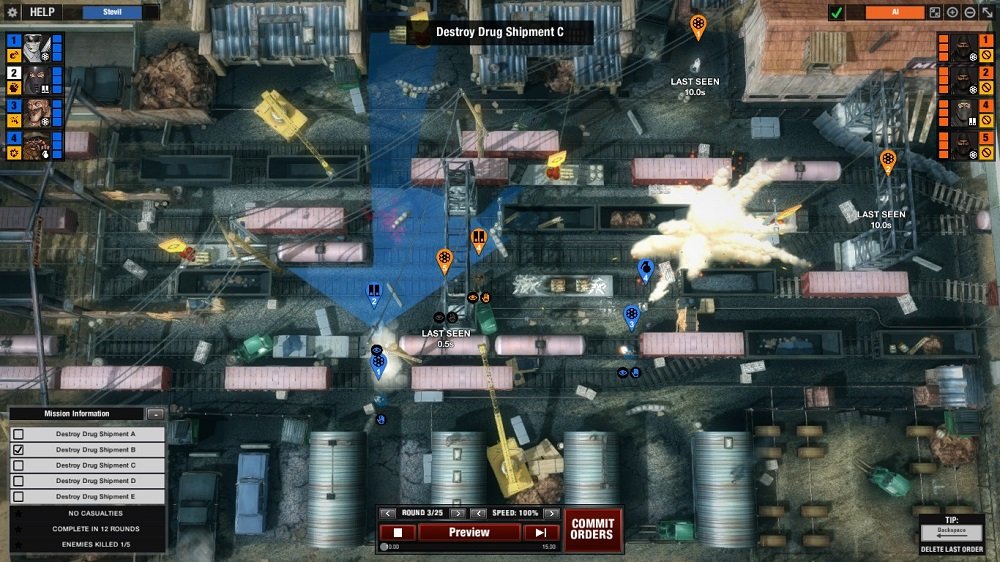 A drug cartel rules the US/Mexico border with an iron fist, and it’s up to a ragtag group of hired guns to take them down, piece by piece. Sure, the plot is generic, but that’s the point. This is a game where tactical gameplay is sold more through eye-popping presentation than narrative reasoning. If you think Frozen Synapse with a Team Fortress 2 aesthetic, that’s TASTEE in a nutshell. Though, despite a great introduction and the 12 mercenaries’ larger-than-life personalities, their quirks rarely translates over to the battlefield. Instead, they end up being silent pawns in your suicidal plans, unresponsive to anything, which comes across as a missed opportunity (or, more obviously, a lack of voiceover budget).

TASTEE’s campaign is spread over 30 missions; each one a single location with a main objective to be completed in a certain amount of moves. There is the added bonus of tougher secondary objectives, but they’re inessential unless you’re into leaderboard scores. That all sounds great until the game starts reusing the same maps and recycling goals from other missions, and the whole campaign outstay its welcome by the second half.

Still, TASTEE remains captivating solely by design. It eschews the current reliance of XCOM’s move/attack system for something more complex. Shooting is automatic, but success boils down to balancing aim penalties – movement speed, distance, cover, and line of sight – along with the rock-paper-scissors effectiveness of your character class (Shotgunner, Gunman, Sniper, and Bomber). Essentially, it’s a turn-based game of rush-and-attack, where you can control every minute detail of movement.

Moves can be as meticulous or streamlined as you want, so long as they’re reasonably achieved within the turn’s time limit. Planning each route requires setting waypoints, and within each waypoint you can choose from a number of commands (e.g., sprint, look, crouch, etc.). Being too cautious can be a drain, but being too lazy will guarantee swift failure. Each mercenary is essential, having special skills another class lacks, and it’s up to you to best compliment your four-man squad. TASTEE is always challenging your complacency in this way; encouraging experimentation and using every unique character skill to your advantage. 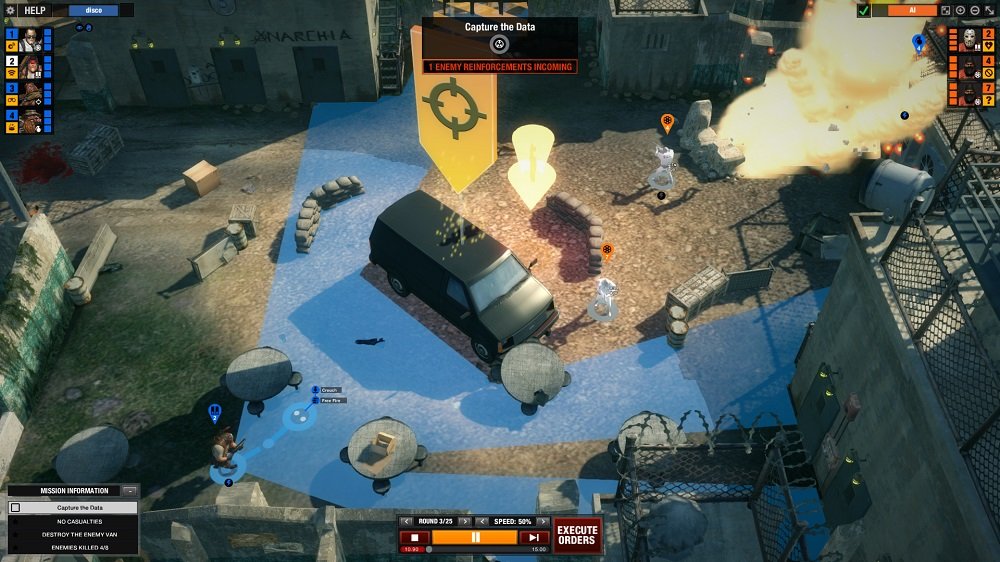 Once the game clicks, it’s pretty enjoyable, but it takes a long time to reach that level of fun. One bare-boned tutorial and you’re thrown into the deep end. TASTEE’s main problem is that it expects you to understand through some text and some trial and error, instead of easing you into things with a roll out of explanatory missions. There’s a fully customisable Practice Mode, but considering how the campaign plays exactly like the multiplayer (the real meat, here), its a tad arbitrary. TASTEE’s mechanics are unceremoniously dumped on you in one go, so by the time your figure out how commands or their cancellations affect aim penalties/bonuses, you’ve needlessly gone through a rough period.

Not that TASTEE ever lets up when you come close to mastering it, however. The AI is surprisingly smart, fast, and accurate. Enemies hold back when you do, move forward when you’re weakened, split up, and perform pincer attacks. They’re so good, in fact, that despite some of your best staging, there are times when your own team feel too sluggish to respond; even moments where the AI are within a merc’s line of sight and aren’t locked on because of some fraction of cover, or you have to move your character slightly for their aim to activate. 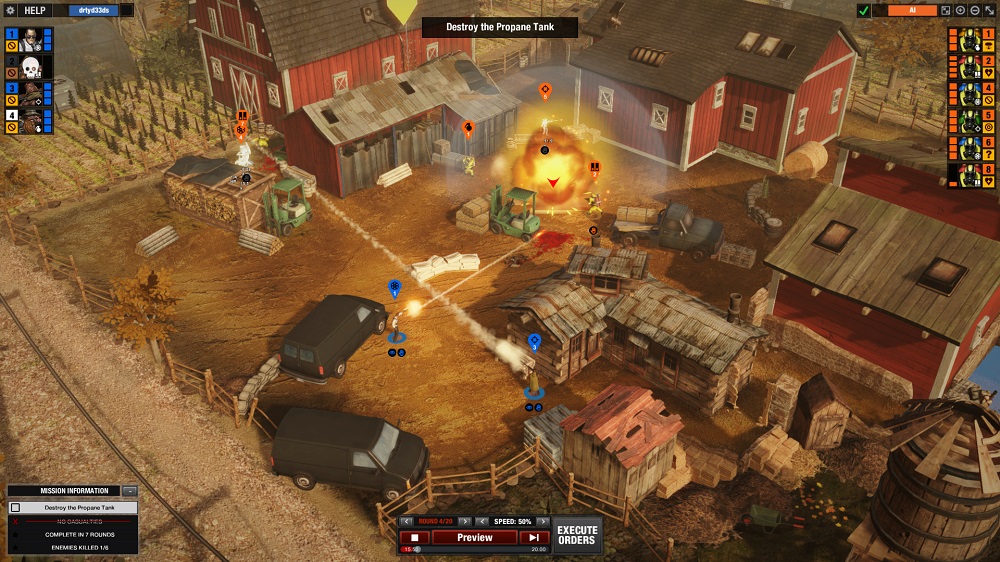 Still, it’s all preparation for the multiplayer, host to an already hardcore player base. Nothing changes over from the campaign: one map, two players in a fog of war, battling it out over a limited amount of turns. It adopts a “play-by-mail” system, which is quite thoughtful of the players’ need for time during elongated sessions. It also takes the pressure off rash decision making, knowing you can make a move, run an errand, then come back to find a notification for your turn. TASTEE can still be played live, but the added sentiment makes for a refreshing change of pace without losing any of the tension.

TASTEE: Lethal Tactics is an uncompromising game to get into, never once changing gears from its difficult plateau. It’s firm but mostly fair, where your failures are usually based around that one lapse into laziness. But when you play back your success, and see this 20-minute incremental strategy turn into 40 seconds of ferocious B-movie action, it’s a violent ballet that even John Woo would be proud of. And it’s also why you might just keep coming back to TASTEE, despite tearing your hair out in the process.