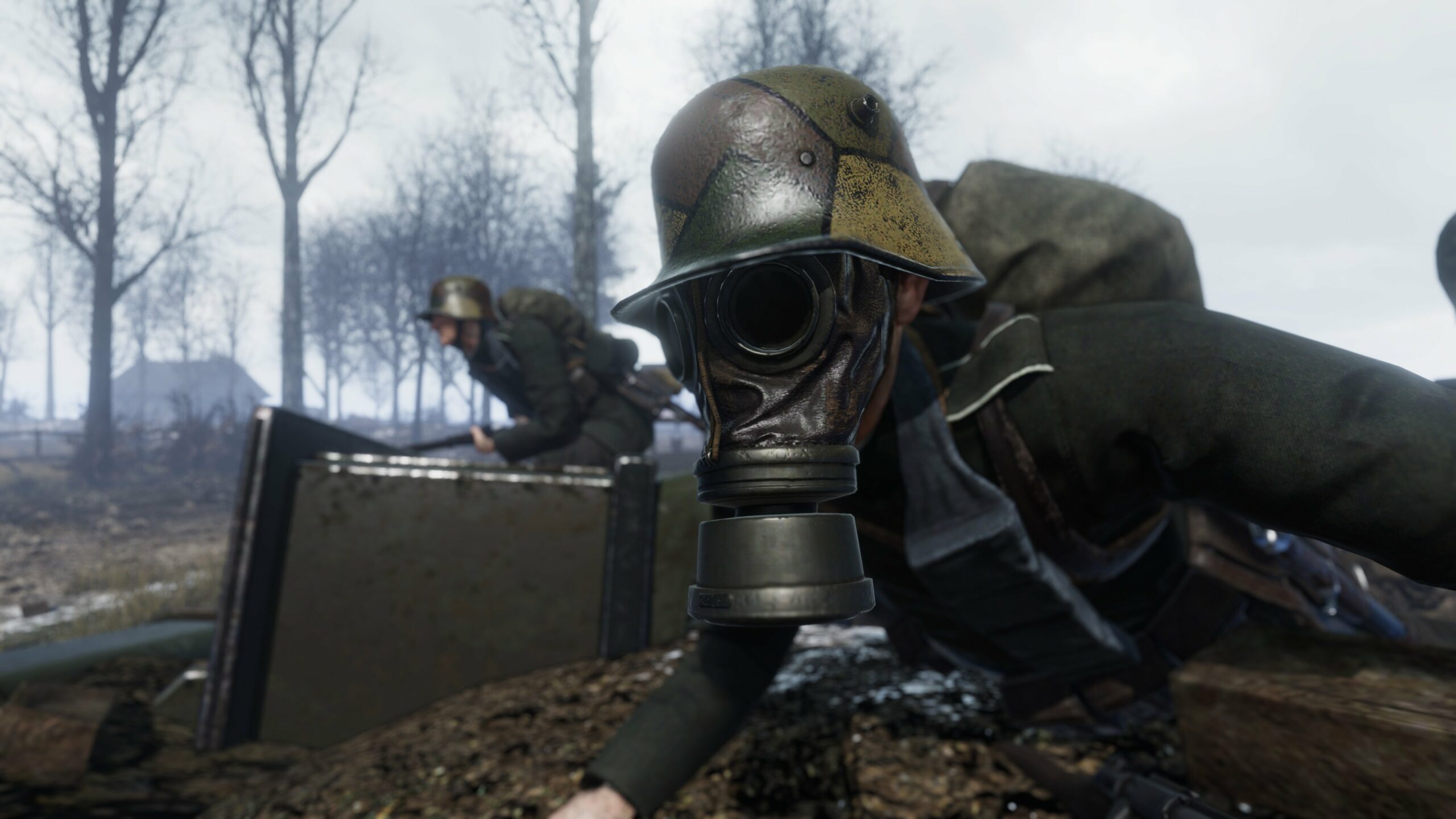 These folks don’t seem that tan

Verdun was a game unlike any other wartime first-person shooter. The focus on World War I in a pre-Battlefield 1 world stood out, and trench warfare inspired a focus on more tactical, patient gameplay. It was an absolute blast for anyone wanting a change of pace or just a historically influenced shooter.

Tannenberg, by the same developers, is moving across Europe to the eastern front. World War I consisted of a handful of theaters, all unique in warfare and battle tactics. As such, Tannenberg takes a different approach to map design to keep the formula fresh while still maintaining that same level of historical accuracy and love found in Verdun. I just wish more people were playing it… 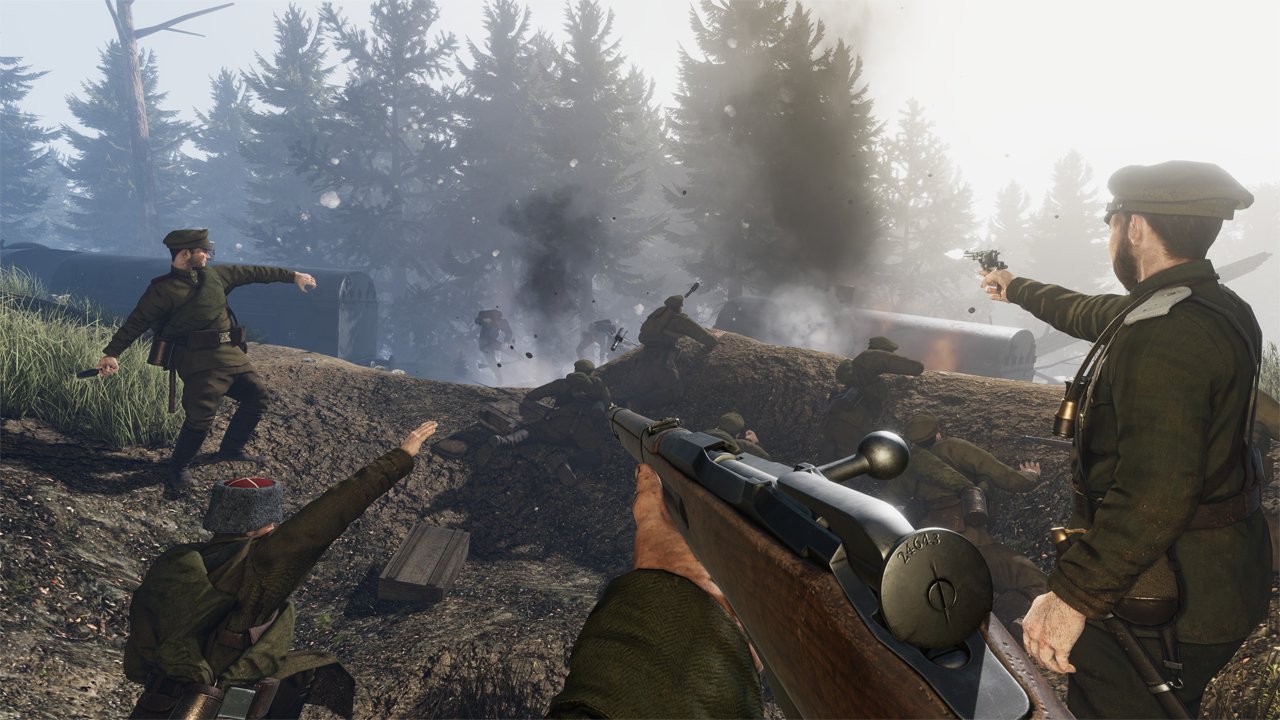 Tannenberg, like Verdun before it, is a multiplayer-only first-person shooter set in World War I. While not the most popular setting for shooters, both Verdun and Battlefield 1 proved that it could work and now Tannenberg looks to do the same.

Tannenberg is in a bit of an awkward spot: ideally, those who played Verdun anticipated and bought the game and are now playing it. The map design is quite different between the two games, so both still have their relevance; Tannenberg does not make Verdun obsolete. This is backed up by the player count — they’re about the same and hover between 250 and 400 as of this review.

And therein lies the biggest problem: there are already not many people playing Tannenberg. Battles take place on various maps around the eastern front of World War I in 64-player skirmishes. I have never seen a match with 64 players; most of the time, the player count hovers around half that, and the rest of the slots are filled by bots. You can see the popularity of any given map before joining and some maps have less than 20 players. In my experience, the team with more human players is the winner.

I don’t inherently think playing with a lot of bots is a terrible thing, except that the AI of the bots in Tannenberg is quite awful. It’s immediately apparent while playing who is a human and who is not. The computer players are the ones who take forever to react in close quarters and often run to a new objective in a legitimate squad. Meanwhile, the human players are firing all the time and running all willy-nilly wherever they please, never in formation.

The time to kill (TTK) any given player is extremely low. Much like Verdun, Tannenberg aims for a pseudo-realistic approach to war. There are little heroics here, as the TTK doesn’t allow for it. That being said, there’s little to no teamwork that I’ve experienced either. No one has responded to VoIP, so I mostly just follow the masses (of primarily bots) into an area and do what I can until I die from someone I usually can’t see. It’s not particularly entertaining.

There are three modes, but literally every time I’ve gone to play there haven’t been enough people to play anything other than the main game mode: Maneuver. The other two, Attrition (team deathmatch) and Rifle Deathmatch (every man for himself), I have not played. I just booted up the game to double check: There are 77 players in Maneuver, none in Attrition, and 2 in Rifle Deathmatch.

So yeah, Tannenberg‘s player count is an issue. 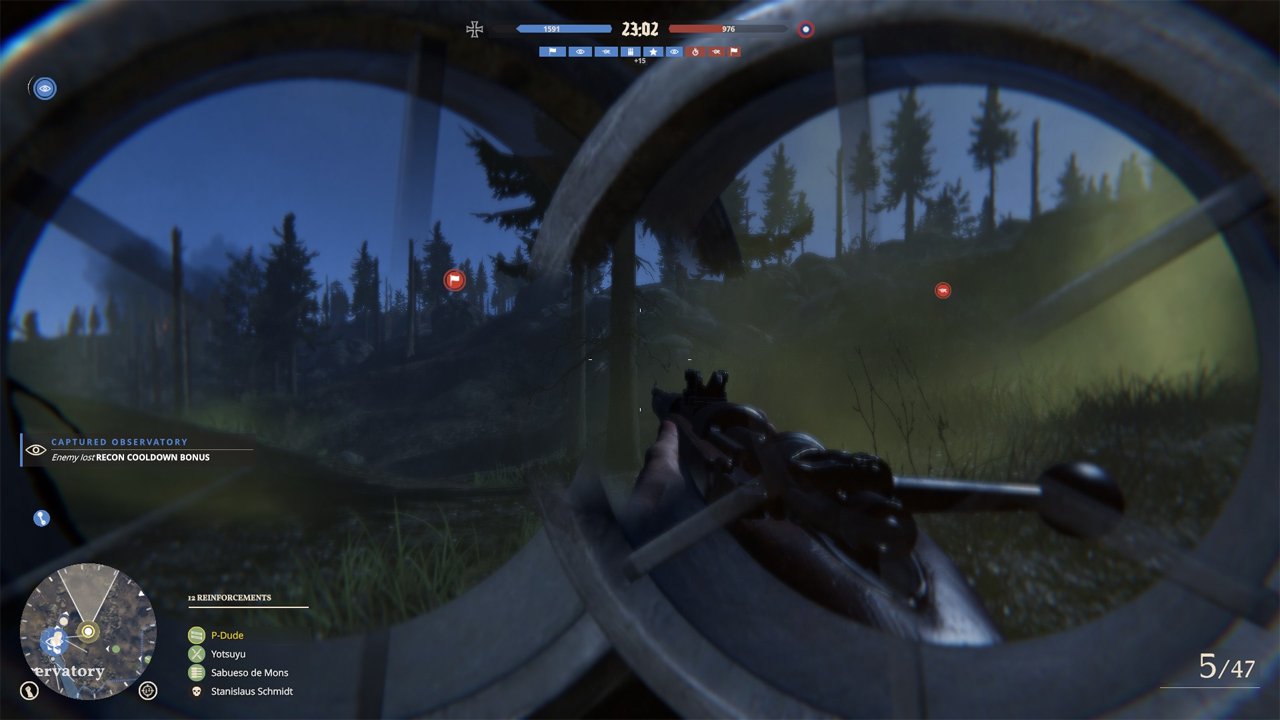 Playing the Maneuver game mode can become quite intense at times. Maps are large and have a handful of capture points strewn throughout. Capturing more than your opponent helps reduce their resource points and stabilizes yours. To win, either have more resource points than the opponent when the match ends, reduce their points to zero, or capture the enemy’s headquarters. There is a decent layer of strategy involved as to the order in which to capture areas, and orders can be given to communicate with the entire 32-man team.

Close matches seem to be common. I’m not sure if the bots kick it into high gear when losing or if more human players tend to join as the game goes on, but regardless, I’ve played some real nail-biters. I didn’t expect that from matches that last 30 minutes, but it’s definitely possible.

One thing that Tannenberg nails is the World War I feel. I teach about the Great War every year and fancy myself familiar with the topic. While Verdun excellently captured the brutality of trench warfare from the western front, Tannenberg does the same for the haphazard warfare on the eastern front. The uniforms and guns are spot-on, though the animation can bring any sense of immersion to a halt at times. Still, this is a lovingly crafted historical shooter from an infrequently visited era.

Tannenberg is by no means a bad game. That being said, I can’t recommend it for the sheer fact that the player count is far too low. The audience for this game is split with Verdun, its predecessor, and there simply isn’t enough here to make playing it the clear choice. Two of the modes in Tannenberg aren’t even playable unless you want to play completely with mediocre AI bots. Perhaps during a sale or after a big update, when the population spikes, it’s worth a purchase. Otherwise, I’d just stick with Verdun.