Starbreeze Studios certainly turned heads when it unveiled its progress on a brand-new Syndicate game, although attached to many of those heads were scowling faces sporting sneers of disgust. Syndicate is yet another classic PC game that has “modernized” by mutating into a first-person shooter.

The isometric tactical violence of Bullfrog’s classic 1993 PC title is a distant memory in a shooter that owes more to Deus Ex and BioShock than anything produced by Peter Molyneux’s old studio. Starbreeze’s world is one you’ve seen before, and not because you remember the game upon which it is based. 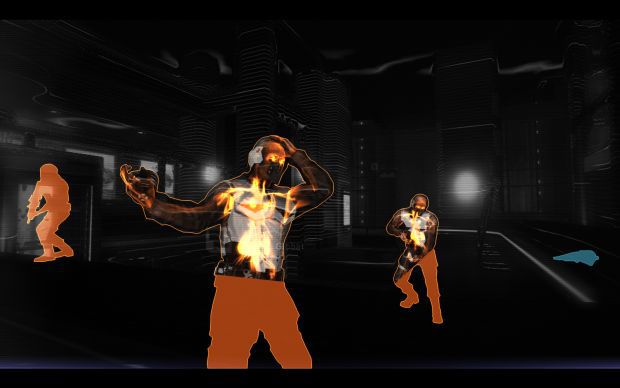 Syndicate‘s narrative campaign has players waking up handcuffed to a chair while a masked stooge merrily rearranges your face with his fist. The reason for being there is vague but it doesn’t really matter, as it’s not long before you’ve broken free and begun a sociopathic murder spree that may or may not extend to screaming pedestrians. This is what Syndicate‘s campaign is like from beginning to end — inconsequential sequences, as vague as they are pointless. Then the killing.

This wouldn’t be a bad thing, if not for the fact that Syndicate wants you to believe it’s more than that. Much of the story is littered with moments of exposition in which inscrutable characters say mysterious things, hoping against hope that you’ll actually believe something important is happening. The sad truth is, nothing important ever happens. Characters speak obtusely and make ambiguous allusions to more interesting horizons, not because they’re hinting at some jaw-dropping revelation later (one never comes) but because they truly have nothing of value to say.

In fact, the game’s six- to seven-hour narrative can be summed up in a sentence: You work as an agent for a corporation that unsurprisingly turns out to be the bad guy. Everything within that scenario is simply an attempt to copy standout moments from other games, such as Deus Ex, while the protagonist desperately attempts to mimic Andrew Ryan. By the time the game reaches its infuriatingly amorphous conclusion, one would be hard-pressed to name a single plot point that wasn’t an overplayed trope.

Fortunately, there’s plenty of violence in between the vapid story bits, and it’s slightly more engaging than the writing. As a cyborg agent, players are armed with a new technological advancement, the DART 6 chip. This chip grants our silent protagonist a range of physical enhancements, as well as the ability to “breach” machinery and the human psyche. This breach mechanic is Syndicate‘s ace in the hole, though it also turns out to be its crutch.

Breaching is performed by pressing a single button while looking at the desired object. If one looks at a computer, it can be hacked to open doors or take over automatic gun turrets. Breaching is essential for breaking the shields of various enemies, and it can even disarm grenades. As players progress, they also unlock special breach abilities to demolish an opposing force. Backfire makes opponents’ weapons explode, knocking them back and dealing damage. Suicide will cause an enemy to hold a live grenade in his hand, taking himself and any bystanders out of the battle. Meanwhile, Persuade can force a foe to turn his gun on his comrades before putting a hole in his own head.

The agent also has access to DART Vision, which slows time and renders enemies in orange against black environments to make them easy targets. DART Vision can also see through walls, giving one a tactical advantage in any situation, although it needs frequent recharging so players can’t DART their way through the entire game. 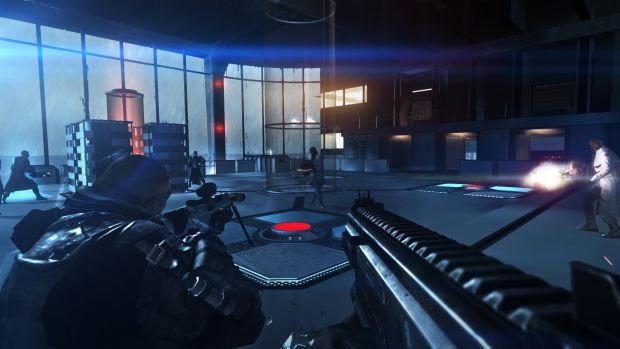 Possessing the ability to see through walls and cause mayhem among a rival syndicate’s forces is certainly gratifying the first time one does it, but that’s the problem — it’s done too many times, and the initial glee soon wears off. Not only that, but Syndicate never capitalizes on its ideas to create unique scenarios for their implementation.

You cannot, for example, see through walls and find enemies before you meet them in order to soften the targets. Opponents usually only spawn after you’ve entered a wide-open combat zone, which totally undermines the point of DART Vision and limits the application of breach abilities. Truly empowering uses of the agent’s talents are almost always scripted, not improvised on a player’s behalf. The core combat is solid, but repetitive, offering old-fashioned FPS gunplay with the occasional chance to make an opponent blow himself up. The powers at an agent’s disposal are the powers that a psychological predator would have, yet combat is so in-your-face and ordinary that they feel like cheap gimmicks. Simply put, the game has not been designed around any of its unique gameplay additions. It’s a bog-standard shooter with some tech-magic thrown in. There are other shooters on the market that have done the whole “mess with an enemy’s mind” schtick in a far more involved, satisfying way, which makes one ask — why didn’t Starbreeze steal some gameplay from those games alongside their narrative ideas?

Syndicate quickly becomes formulaic, as players trudge through a corridor, enter a combat zone, trudge through another corridor, and repeat the process. Every now and then, an interesting weapon with homing bullets or laser fire will turn up, but it’s nothing that hasn’t been seen before. The breaching ceases to become entertaining after a while, having been relied upon for so long with little variation, while opportunities to breach machines and turn them against the opposition are few and far between. 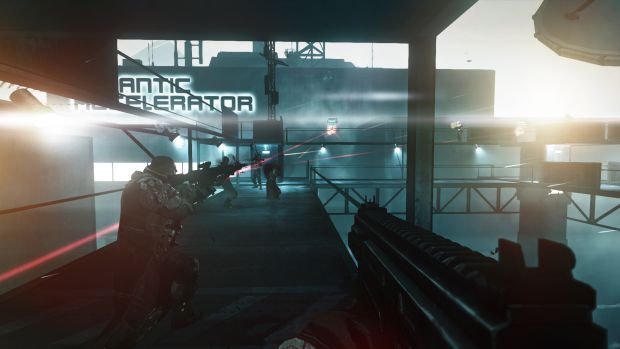 There is nothing wrong with Syndicate‘s single-player mode, but there’s nothing right either. It’s just okay, incapable of raising much more than indifference. It’s solid, playable, and capable of chewing up a few hours, but it’s not compelling in the least. It goes through the motions, marching from A to B and playing it safe the whole way, occasionally stopping to try and convince you that you should care about the elementary and highly cynical plot details.

The mediocre campaign is, however, half of the experience, and co-op makes things a little more interesting. Up to four players can join forces and take on nine missions at various difficulty levels. Not only do the environments sport more variety than the campaign, but so does the gameplay, with far more breach abilities and customization opportunities. Players can build their own agent, selecting weapon loadouts and abilities that are far more varied than in the campaign. Virus, for example, can sap health over time and ignore armor. Meanwhile, the Shield power generates armor for the entire squad. Agents can earn research points, which are invested into developing new weapon modifications and powers, essentially building their own specialized class that suits their play style. Ultimately there’s just so much more to do, to the point where the campaign should’ve just been scrapped to add more resources to the co-op.

Teamwork is quite important, and while the first mission is fairly straightforward, things get significantly tougher fairly quickly. There are opposing generals capable of chewing into a player’s health bar within seconds, requiring teams to draw fire, heal each other, and breach shields as a unified group. The contextual commands make this gameplay fairly fluid and easy to pull off successfully, although the sheer weight of opposition means things never feel too easy. Enemies are fairly adept at taking cover and flanking, while later encounters pit squads against fellow agents, capable of healing each other and dishing out breaches of their own. Once taken down, these foes can have their chips forcibly and bloodily ripped from their heads in exchange for extra research points. 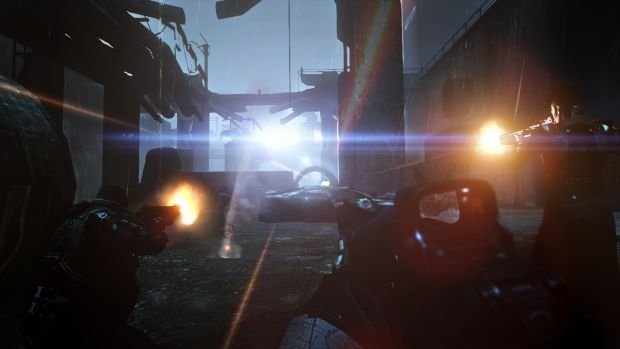 Syndicate‘s co-op mode is a significant step up, and clearly the main draw, but that doesn’t save it from falling into many of the campaign’s pitfalls. For a start, the range of scenarios isn’t varied at all, taking the form of a linear series of corridors to be fought through, a handful of “get item A and place it in receptacle B” fetch quests, or brief escort objectives. The new abilities, for all their variety, still fall under similar categories while the commonplace FPS combat never feels built around them. While teamwork is important, the breach mechanic is so rudimentary and repeated without deviation that it quickly becomes as mundane as everything else.

This is not to say that Syndicate is not enjoyable, because it is. It’s just so very typical and ordinary that hiding behind shallow gimmickry fails to compensate. Having played through each mission, I can’t say I’ve any great desire to go back and play more. The four hours and thirty-eight minutes it took to beat them were fun while they lasted, yet utterly dispensable and easily forgotten. 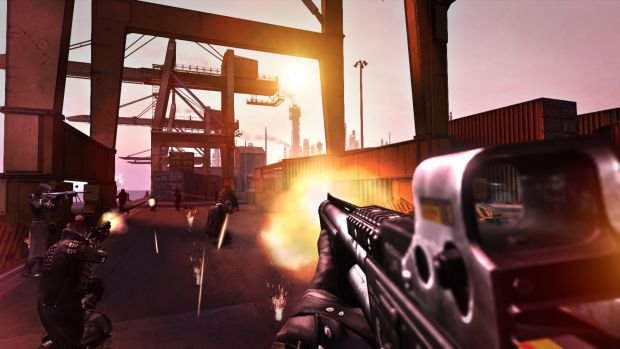 It is almost fitting that Syndicate‘s world revolves around cold steel cities and heartless corporations, because cold and heartless is certainly the feeling one gets after playing. Its sterile environments are clean and spartan by deliberate design, but serve the unintended purpose of personifying Starbreeze’s modern reboot to its core. It’s a gorgeous game, very easy on the eyes despite the overzealous use of lighting and bloom, but beyond the pretty visuals lies an empty void where its soul should be.

By all means, go out and enjoy Syndicate. You more than likely shall, because it will provide a solid dose of transient entertainment. It is a game you will never need to play, but you won’t feel like you wasted your life if you do. It’s a videogame about guns that pretends to be something deeper while striving for nothing more. If you keep that in mind, and you’re happy to play along, you’ll get what you paid for.

But you won’t get anything else.