Forget games as art — games as emotion is the new wave of the indie industry. Exploration of inner feelings and thoughts manifesting through a screen and a keyboard is probably one of the most difficult things to build, yet here we are.

Sym is a haunting yet truthful lens into what it’s like to face one of the toughest and most common emotional disorders: anxiety. The dual nature of opposing personalities is played out through offbeat platforming, sharing a glimpse of what death and survival must feel like within the brain. 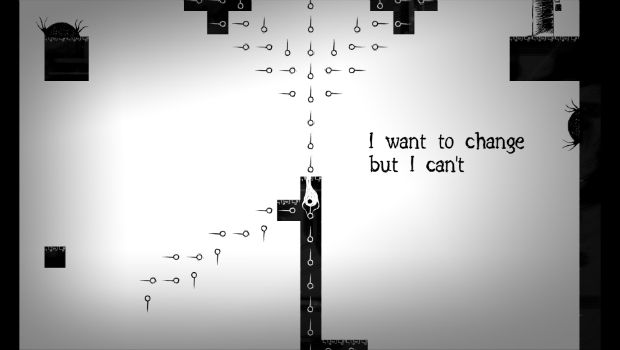 You are Josh, a teenage boy battling social anxiety disorder which manifests itself through an oppressive and dangerous maze where dark creatures and objects lurk. Josh exists through two alter egos — on the upside he’s a black, lanky humanoid and on the underside, an oblong alien-like figure. Both creatures represent a different side to Josh, yet at the same time act as opposing gameplay agents.

Your goal is to switch between both sides to make Josh reach the door, signaling the end of the level. In doing so you must avoid various ghastly obstacles, which differ depending on which side you’re standing on. For example, when Josh is standing upright, he is susceptible to walking creatures and giant human-eating plants, but when he flips he is confronted by spinning saws of death.

This interesting use of the environment allows for an additional layer of puzzle solving, and in some cases there are many ways to reach the end of the level. However, as the game progresses the levels are much more strict and to complete them, you must master speed and timing. There’s also a symbol mechanic within the levels that can change spaces from black to white and back again depending on the type of symbol, which side you’re standing on, and when you decide to activate certain switches. This adds another tricky element to the gameplay. 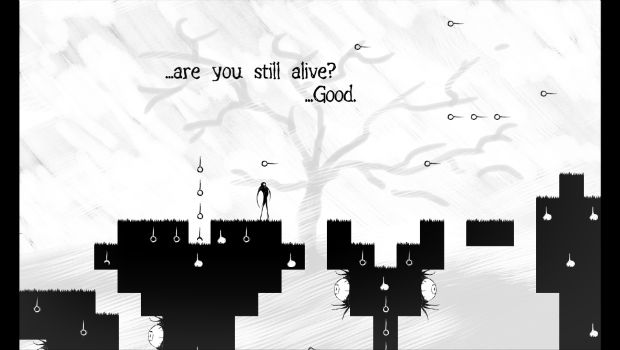 Josh’s thoughts are riddled everywhere, sometimes giving hints to the player on what to do next such as “Run!” “Fall!” “Wait!” — but most of the time, displaying projections of inner conflict like “Lies,” “Miserable person,” “Please don’t stare.” Inner demons come out of the woodwork to work against the player, full of stress and dread: “The bogeyman is coming for you, pray and cry tonight.” These  thoughts combined with the jagged, monochromatic visuals instill a constant sense of being on-edge.

While the art style is intriguing, the gameplay can be downright frustrating at times. The logic of the symbols and switches aren’t very intuitive, and I often found myself just jumping around the level versus intentionally trying to solve what was supposed to be done in a particular situation. Luckily, this tactic seemed to work against itself since fast reflexes and timing tend to win over anything else that Sym presents.

The controls also could have stood to be a bit tighter. Getting caught between spaces or sticking to walls when trying to maneuver through smaller gaps were common occurrences. I also found the pacing of the character’s movements to be loose and difficult to adjust to. This would result in an extra layer of difficulty, which was frustrating especially in intricate, long levels in which death was not welcome. 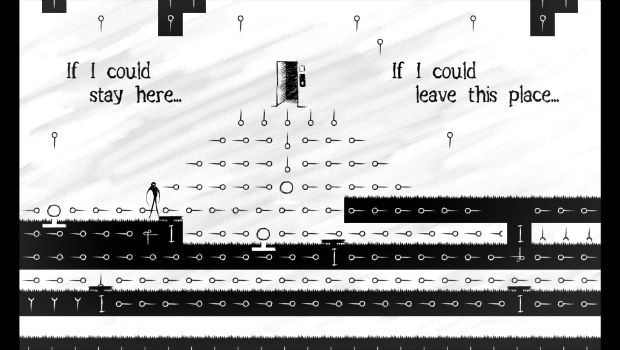 Sym can be plain confusing at times — but I think that’s part of the intended nature of the game (if it wasn’t, the creators may be secret geniuses). Levels twist and turn, obstacles block and re-open paths, and just like life it’s never clear where you’re supposed to head. Trial and error are ever present, along with the notion of failure hanging over your head. Sym ties these concepts together well.

There is also a subtle beauty to this game, and one that I can relate to. The constant battle of light versus dark, of fear and loneliness, building yourself back to where you need to be — these are struggles that most humans face at some point, and Sym allows you to play through that emotional roller coaster in a visual way. I enjoyed its thoughtful nature and its ability to evoke feelings that I only thought were available in darker moments. However, Sym’s atmosphere transcends its loose gameplay and controls, which unfortunately creates a frustrating experience and stifles the impact of its message.