Without thinking, I chucked a cue ball at the bartender, ran up and grabbed the shotgun as it flew out of his hands, and shot him point blank. I then watched as his fragile frame crumpled to the floor and shattered like glass. A bullet flew past my ear and hovered there as I paused to observe it, alerting me to the presence of another person who was about to meet the same fate as the bartender. I felt unstoppable.

It’s a shooter at heart, but Superhot brings something fresh and unexpected to the FPS genre. It mixes thrilling, action-packed combat with meticulous, precision planning, and somehow these opposing ideas are able to unfold simultaneously. It’s all just a matter of timing, and in Superhot, time is in the player’s hands. 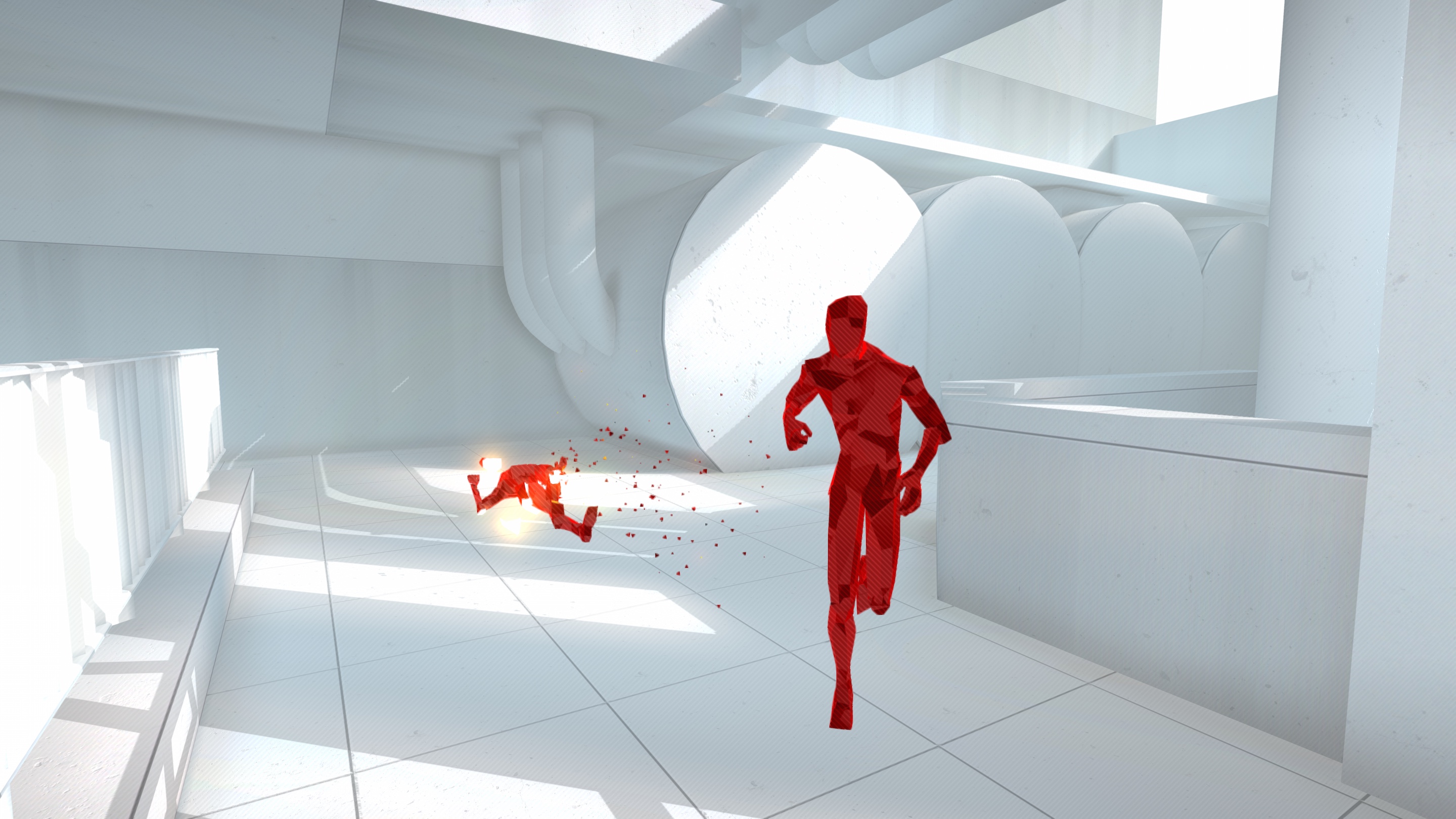 Superhot is about virtual reality, despite not actually being a VR game itself. While accessing the interface of your VR device, a friend introduces you to a crazy new program called Superhot.exe. After playing around with it for a bit, it becomes quite clear that this isn’t an average video game as some peculiar events begin to unfold. You soon find yourself unable to stop playing.

But let’s take a step back real quick. Before the player even opens Superhot.exe, they will most likely be compelled to check out the extensive main menu. The menu is set up like a computer interface, with different folders leading to a variety of entertaining things, including weird little animations, videos, readme files, ASCII art, and even other games to play. It’s one of the neatest ideas for a main menu I’ve ever seen. I honestly spent half an hour or more just messing around with all the different files and folders before I even started the game proper.

Upon initiating Superhot.exe, a stark white room full of red guys will be generated. The design is all about simplicity: red equals bad, usable objects appear black, and literally everything else is coated white. It’s like Mirror’s Edge to the extreme, but it makes the goal clear. You’re here to kill the red guys.

This is where Superhot gets super interesting. For the most part, it plays like your basic first-person shooter, but with one key difference: time only moves when the player moves. This means there is all the time in the world to scope out the enemy and plan an attack. When they move to shoot a red guy, the red guy will move to fire back. Bullets will appear to stop in midair, allowing ample opportunity to maneuver around them as they inch forward with every step. It’s basically the video game equivalent of those slow-motion scenes from The Matrix.

Shooting isn’t the only method of attack, either. Melee weapons and bare fists will come in handy, both for attacking and disarming foes. Punching an enemy will cause them to reel and drop their weapon, which can then be grabbed out of the air and immediately used to kill the owner. Objects such as bottles, cue balls, and televisions can be picked up and thrown as well, which will also cause the enemy to stagger.

Chaining together all these different weapons and techniques to take down a horde of red guys can feel incredibly satisfying. Once every opponent has been killed, the entire onslaught will be replayed in normal time, allowing the player to watch as they execute an impressive display of tactics like a pro. It felt amazing to watch myself obliterate an entire gang by whacking a guy in the head with a bat, stealing his gun, shooting him in the chest, turning around to shoot the next guy while dodging several bullets, throwing the gun at another guy to stun him, picking up a katana off the wall and slicing him in half while he’s still reeling, and then throwing the katana at the guy behind him, piercing him in the stomach. And that was just half of the action! 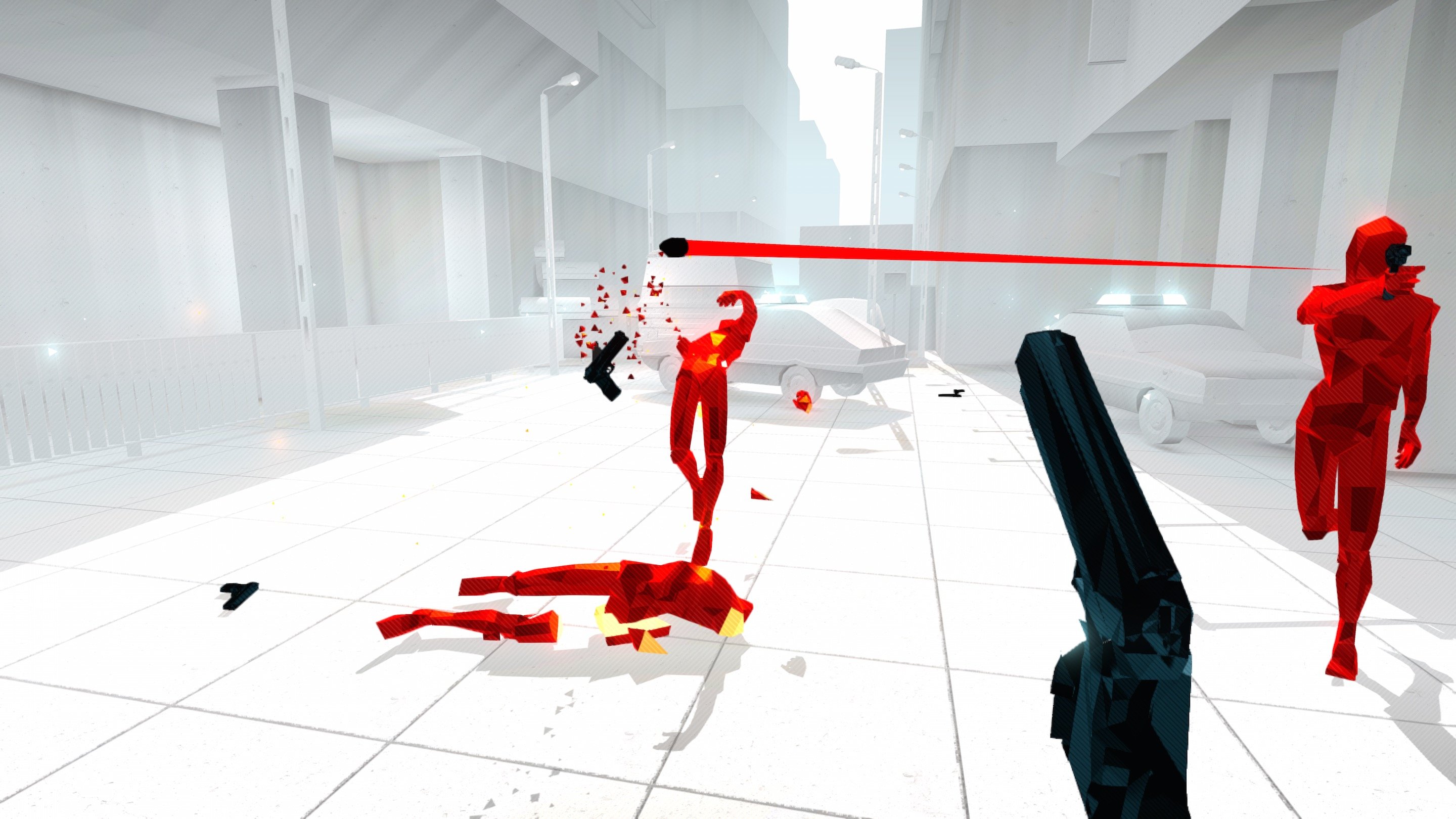 Unfortunately, the excellent gameplay gets interrupted too often. Superhot‘s story is really out there, but while it was unique, I’m not exactly sure I appreciated it. Others will undoubtedly find it intriguing and get a kick out of the tricks it tries to pull, but I felt like it became a little too intrusive. It got to the point where I kept thinking, “I get it, Superhot. I just want to be back in the game already.” Eventually it even outright acknowledged what I was feeling, and then kept on doing its thing anyway later on.

The real meat comes after the credits, when the Endless and Challenge Modes are unlocked. You just have to endure the main story first. These two modes offer up a huge variety of different ways to play, and greatly expand on the excellent FPS gameplay that Superhot provides. I would have preferred for these to be available from the start, but at least it’s something to look forward to.

Endless Mode, as the name suggests, allows the player to go on an endless killing spree. A random room will be generated with a non-stop barrage of red guys, and it’s basically fight ’til you die. There are a few other options to choose from, like trying to get a certain number of kills as quickly as possible or killing as many enemies as you can under a certain time limit. Obviously, these aren’t really “endless” as the folder would imply, but they do keep things interesting. 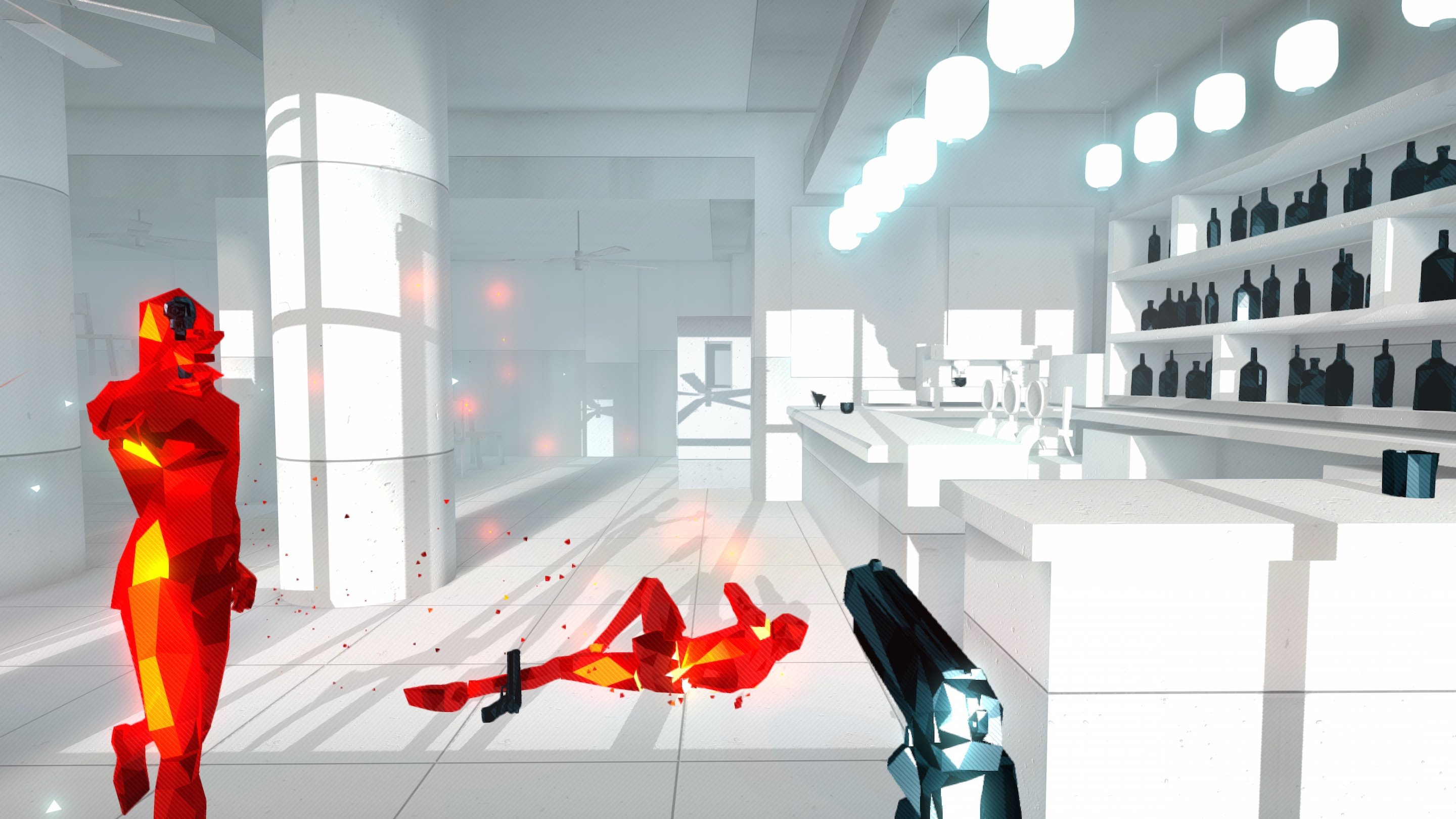 Challenge Mode is the best part of Superhot. This folder allows the player to go through every stage from the story under certain challenge conditions, without all of the actual story bits getting in the way. There’s a speedrun challenge, one where you can only use katanas, one where you can’t pick up anything and can only punch, one where throwing objects results in instant kills, and more. Every option was fun. They completely changed the way I played, with the katana-only challenge being my personal favorite.

Even though the story was a bit excessive, Superhot remains a unique addition to the shooter genre. It provides a challenge while giving the player plenty of time to consider their options at every step. Do I hit the guy running at me and pray the other guy doesn’t shoot me? Or go for the gun-toting dude first and hope the other one doesn’t have time to run up and punch me? It’s essentially the opposite of most other shooters, where the action can be so frantic that you barely have to time to think while bullets are flying past left and right.

The slow-motion combat might not be for everyone, but I found it to be just as exciting as any twitch-based shooter. Being in control of the situation at all times is exhilarating, especially when one wrong step could mean certain death. But don’t worry, there’s plenty of time to choose each step wisely.