As I continue to get older and somewhat jaded with video gaming, I’m finding myself getting bored with run-of-the-mill games that don’t use the medium to its full advantage. Conversely, I find myself lavishing praise on the ones that do. Return of the Obra Dinn and Titanfall 2′s “Effect and Cause” level comes to mind when thinking about games that use the medium to its full advantage.

Without a doubt, I can now rank Superhot: Mind Control Delete among that pantheon along with possibly one of the most fun games I’ve ever played. 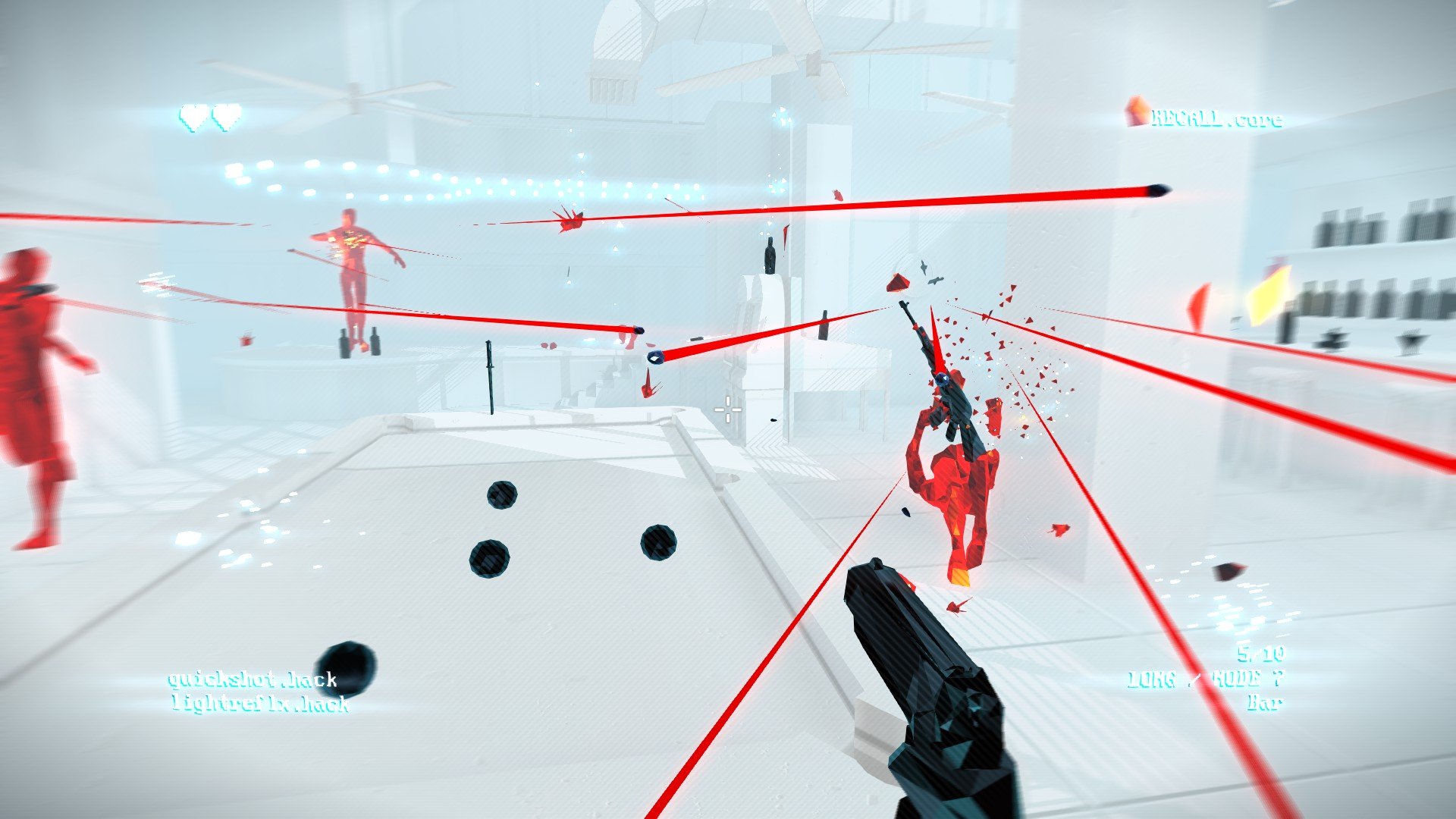 Despite being relatively short and what some would call scant in content, the original Superhot was a game-changer in the shooter genre. The concept was so simple but making time only move when you did was a welcome breath of fresh air. On top of that, there was a cynical science fiction story that while Ben Davis didn’t enjoy in his review, appealed to the Phillip K. Dick fan in me.

The basic concept in the standalone follow-up Mind Control Delete remains the same. Kill the glowing red enemies by any means possible using guns, melee weapons, or your own fists. Time only moves when you do, so that allows you to dodge bullets and plan your success in what would ordinarily be an overwhelming situation.

New to Mind Control Delete (henceforth MCD) are some roguelite elements. Unlike the original where you just loaded up a level and killed everyone in it, MCD has nodes where you play through a series of randomized levels in a row. The benefit of this to the player is that they can acquire powerups through the node, the downside is that you can only take so many hits before you have to start the node over again.

I can already hear people turning this game away because of the randomized levels but it’s handled with care. Each level’s layout will remain the same throughout the game, there may be some small tweaks like a hole covered up but all items and cover will mostly remain in the same areas throughout. The randomization comes from where enemies will spawn from and the levels that you will get in each node.

Another big difference between MCD and the original is that you don’t have to kill everyone in a level. Because the spawns are randomized, you only have to kill a certain number of enemies per level before all the other enemy heads will explode in tandem. The number starts low and eventually climbs into the double digits as you progress through the game.

One small problem is that they never tell you how many enemies you have left and if you are making a risky final play you can be left at the wrong end of a bullet because you lost count or the number increased without your knowledge. On the other side of that though is the feeling of seeing all your enemies exploding as you kill the final enemy in quota. Too many times I didn’t realize I was holding my breath working through the final few kills, only to see the level come to an end, a blurred screen pulse almost telling me it’s OK to breathe again.

The powerups that you gather through the nodes are an excellent addition to the original concept. When you start a node, you pick a basic archetype which comes with a perk to how you play. There’s one that gives you an extra heart to start, one that allows you to charge across the level at an enemy, and my personal favorite, recall your katana after throwing it. Then as you progress through the nodes, you get more powerups that either enhance your basic archetype or more generic stats.

As is the case with every game with roguelike progression, you have to be on your toes about how you approach a problem depending on which perks you’ve amassed. The variation makes it so that every node is fresh enough to keep you engaged through the roughly 10-15 hour campaign.

Also keeping things fresh are new enemies that begin to spawn in the second half of the game. Similar to the approaching fleet in FTL or the increasing difficulty to time played element in Risk of Rain, these enemies are put in to make sure you aren’t lollygagging around the level and moving along your way. There are three of these types of enemies and each of them has their own abilities, similar to the base archetypes you can choose from.

The kicker is that you cannot kill them. They are simply there to make your life harder. There is a very specific feeling of dread when you hear their spawn stinger that is reminiscent of Left 4 Dead’s announcing an approaching tank or special. Immediately your focus shifts to finding them on the map and then avoiding their attacks while working through the other enemies as quickly as possible.

The new enemies are tied into the story and how the system from the old game is adapting to your newfound powers. If you didn’t like the original game’s story then you probably won’t be changed with this entry, because MCD takes the themes it focused on and then turns them up to 11. It’s cynical and doesn’t hesitate to stab the knife in deep when it’s telling you how futile coming back is. It kicks repeatedly and doesn’t ask if you’re OK, and for that I love it.

Which leads us to the ending, and what an ending it is. I will not go into what happens at the end in specifics but the developers pulled off something so ballsy that I can’t do anything but applaud them. There’s been some anger bubbling up around it and while I can see where it is coming from, it’s refreshing to see a developer stick to their guns in the name of theme and story. 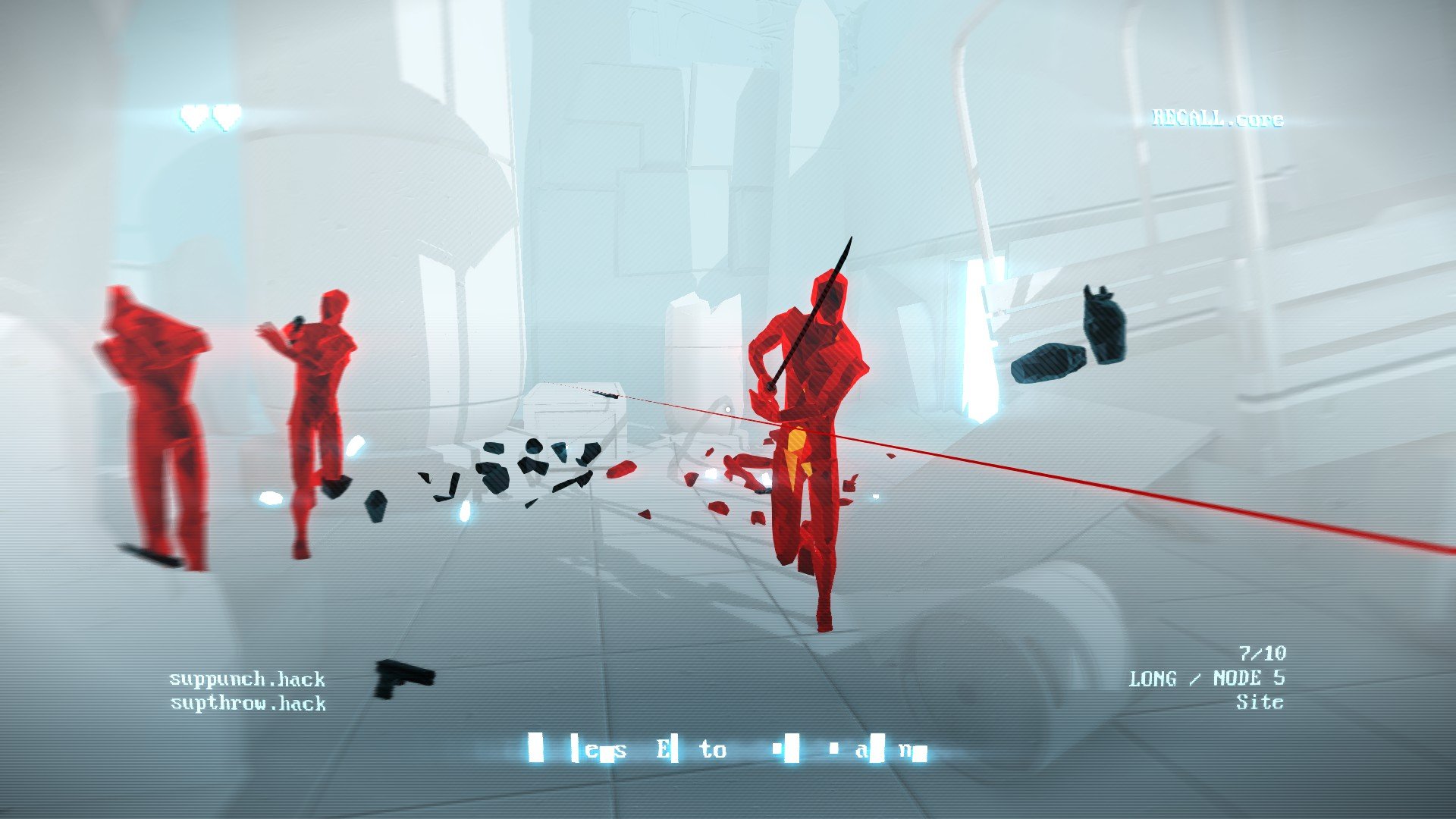 Throughout the entire game, I couldn’t push the elation I was feeling out of my mind. Even when the game got hard or I died on the last level of a node, there is an undeniable amount of megalomaniacal fun to be had when time bends to your will. Mind Control Delete is an improvement on everything that made the original Superhot great.

It’s a power fantasy that makes you work for the right to feel like a god and when your plans come together it’s a joyous romp to play.

[This review is based on a retail copy of the game provided to the reviewer for free for buying the original game prior.]