As old school as the Force

I’m really surprised that Super Star Wars is getting a re-release in 2015. No, not because “it’s old,” but rather the fact that it’s an exceedingly unforgiving retro game, which doesn’t really gel with the hand-holding landscape of modern gaming.

While some elements haven’t aged all that well, it’s still very much a classic. 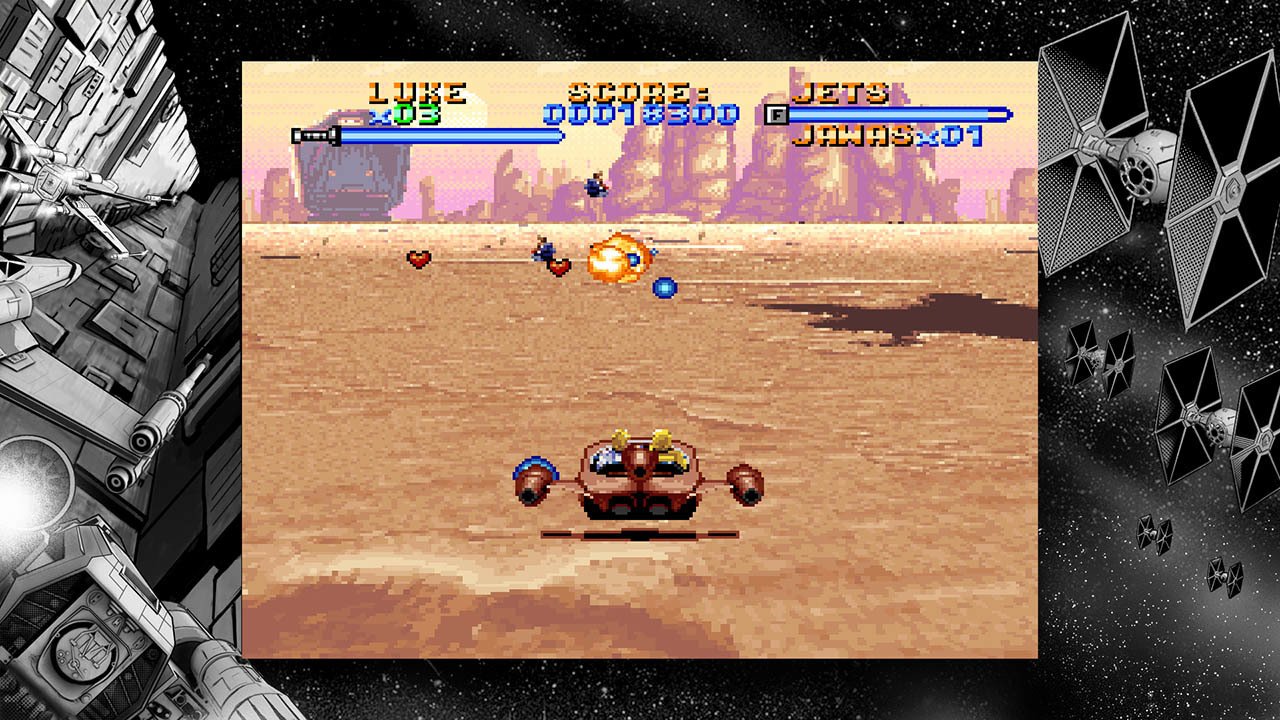 Despite the fact that a lot of 2D platformers in the ’90s were keen on a linear format, Super Star Wars mixed things up considerably. It’s a run-and-gun title at heart, but it has arcade elements, vehicular portions, and some exploration elements peppered in to keep you constantly on your toes. While the first stage (the desert of Tatooine) is straightforward, the game really starts to open up on the third mission, the Sandcrawler. Here, you’ll face ridiculously tough platforming sections with hazards, enemies, and moving platforms constantly at odds with the player.

Almost every stage has something new to throw at you. Whether it’s auto-scrolling sections with platforms crumbling underneath your feet or all-out arena brawls, no one experience feels the same. I love the silly liberties taken with the story, which only loosely follow the film, like Luke fighting a sarlacc in the very first mission. I’m glad that the developers were given a lot of leeway here, especially when you consider the limited settings in A New Hope — the crew essentially hangs out on Tatooine before heading directly to the Death Star.

This change of pace is especially evident for the boss fights — hulking, memorable masses that are some of the toughest challenges in the game. Speaking of challenge, Super rewards those of you who don’t die, gifting a permanent health increase whenever you come across a giant heart power-up, as well as full-use of whatever power-up you happen to have equipped at the time. Oh, and there’s one more thing — checkpoints basically don’t exist.

It is missing a bit of variety gameplay-wise though, mostly due to the fact that Luke doesn’t really start his Jedi training until the next iteration. Because of this adherence to the source material, Super Star Wars is a shooter through and through, with very little emphasis on melee combat or special powers beyond the Contra-esque power-ups and some ancillary use of Obi-Wan’s Lightsaber. Having said that, roughly halfway in you’ll have the option to swap characters (Han and Chewbacca join Luke), who bring in their own set of animations with them.

As for the “enhancements” that accompany this re-release, they’re pretty light. The biggest addition is probably the save state option, which allows players to snapshot their progress anywhere in the game — it’s extremely useful for saving your progress before a boss, or when you just have to pick up and leave. Sadly, it’s only one slot, and I would have loved to have seen an option to catalog all of the game’s wonderful boss fights. Other than that, you’re basically getting a selection of three filters, border options, and leaderboards. You can get a better look at everything in the video above.

Super Star Wars remains a classic over two decades later, and I’m happy to see it being reintroduced to a new generation. I sincerely hope this leads to the production of remakes for the superior Empire Strikes Back and Return of the Jedi entries — perhaps with a few more extras along for the ride.