Indie in the outfield

Like many people out there, I learned how to play most sports through videogames. By the time I entered various real-life leagues for baseball, basketball, and football, I had a grasp of the basic concepts of each, mostly thanks to classics like Bad News Baseball and Super Baseball 2020, two of my personal favorites.

Super Mega Baseball seeks to remind us of that retro arcade-like era of sports, where the games were mechanically sound, but more exciting than a hardcore simulation. 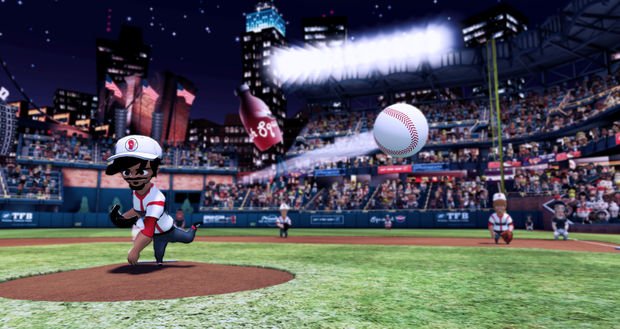 I’m not going to sugar coat it. Super Mega Baseball doesn’t have a whole lot of options or extras in its downloadable incarnation. There’s no training camp, massive simulation mode, coaching options, or batting and pitching minigames. Instead, Mega does one thing and does it very, very well: a modern arcade rendition of baseball.

One of my favorite things about Mega right off the bat is that it has a really cool tutorial that’s designed to just “let you play.” I’m too used to going straight to the help menu these days, and immediately the developers put in a little message saying “we recommend you play a game first before reading!” I love it!

Another easy sell is the cartoony veneer that reminds me of old-school arcade baseball games. It’s easy to get into as the characters look semi-lifelike but exaggerated, with ridiculous hair and accessories. Teams are mostly named after animals, including the Moonstars and the Wild Pigs, and have their own special focus like power pitching or batting. The crowd effects are also impressive and the stadiums are interesting, which all help set the tone.

Every system from batting to pitching to fielding is set up so that it’s easy to learn, but tough to master. The former lets you aim a contact swing with the analog stick, compensating for where you think the pitch is going to go — once you’re ready, just hit the corresponding button. Flavor text will pop up that tells you whether you swung early or late, which not only adds to the charm, but also helps you improve.

You can also bunt or hold a different swing button to charge up a power hit, giving you a roughly three-second window to garner the highest amount of power before the charge fizzles out. It was here that I realized how deep Super Mega Baseball really was. It may have a silly art style, but the depth is real, and even hardcore sports fans will have a skill ceiling to work towards. You can edit your batting lineup if you so choose.

Baserunning is also fun, as you can hold L1 to advance all runners, R1 to return, and hold both to freeze — which makes pickles particularly fun. You can also individually control runners with the analog stick. Fielding is probably my favorite part. Players can automatically gravitate towards a pop fly, but the more you jack up the “Ego” meter at the start (read: handicap), the less automation you’ll get.

Think “All Madden” and you’ll have some sort of idea of what to expect. Again, there’s plenty of advanced options here, including the choice to toss power or light throws (the former is timed just like power hitting), and you can cut throws from the outfield to the infield by pressing L1, or throw to any base by pressing the applicable face button that matches up to the diamond. 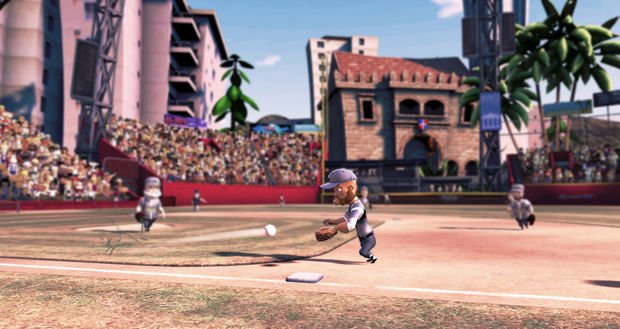 As expected pitching is also a well-crafted system. You can choose your pitch type from plenty of options like a two-seam fastball and a forkball, in addition to your typical sliders and curves. Pressing the button for a perfect pitch is also timed like nearly every other skill-based mechanic, and you can of course choose the trajectory. As a result every pitch is intense, and the transitions are so quick that it doesn’t feel like any particular game is dragging on and on. The default setting is for five innings, but you can go up to the standard nine.

Custom characters are a big focus, with options to edit first and last names, gender, appearance, skin tone, mood, and jersey number. If the team names were any clue this isn’t your typical baseball game, and you can have whoever you want in your particular lineup. If you’re the type of person who likes to put their family and friends into games and painstakingly recreate every detail, this is your chance.

Again, don’t expect to be playing Mega for months down the line if you don’t dig massive amounts of exhibition games. There is a season mode, but it’s basically just a string of games without a whole lot of meta-options. And while there are technically unlocks, they’re more like marginal perk-like increases for your team such as “Yoga Classes” that provide a small stat increase. They aren’t all that exciting. If you so choose you can go at it solo, but the game supports up to four players. 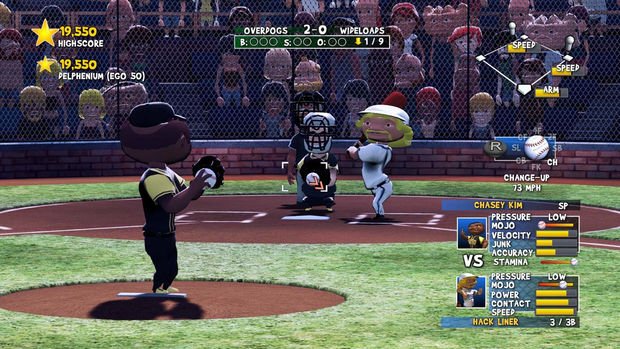 Super Mega Baseball should probably be your next purchase if you moderately enjoy baseball, either from a nostalgic “I like home run minigames” or an “I actually watch MLB” angle.